On Death, Dying, and Funerals in Korea

By Mimsie Ladner on Thursday, February 28, 2013
As an expat living abroad, I am often exposed to many unique cultural experiences.  While most of them are positive and happy (weddings, holiday celebrations, and special birthdays) others can be crushing and tragic. Although I never imagined I would attend a Korean funeral, expat life is still “real life” and as such, a dear friend of mine lost her father to a heart attack last year. I didn’t know what to expect and, to be honest, was quite nervous about going, but knew I had to be there for my friend and attend his funeral.

To prepare myself, I did a bit of research about death and funeral culture in Korea. As it turns out, the modern funeral is quite different than the ones of the past, which is to be expected in an ever-changing country like Korea.

In dynastic Korea, there were numerous superstitions associated with death.  Any omen of death — be it a dream or having one’s name written in red — evoked great fear. Other worries included having one’s spirit lost and wandering in the afterlife or not being properly taken care of by offspring in the years to follow one’s death.

Because of these concerns, death was (and still is in many ways) feared and not necessarily accepted as a natural part of life. To ensure an easy and safe transition into the afterlife, Korean funerals were very structured and made up of a variety of important rites.

Royal funerals were elaborate events of parades and grand services. Funerals of commoners, though drawn out, were simpler.  Lasting up to a month, villagers sang mournful songs and wrapped the deceased’s body in a white su-ii, a hemp cloth often prepared long before one’s death. They also held services in the deceased’s home, offering up certain foods and gifts so that his or her spirit would be protected as it traveled into the spiritual realm.

Even today, many of these traditions are still upheld, but with a modern twist.

After my friend told me that her father had passed away, she announced the days that the family would be accepting visitors at the hospital’s funeral home. In contemporary Korea, a funeral lasts about three days so that family and friends from other cities can visit and pay their respects.  During this time, the immediate family rarely leaves the side of the person who has passed.

When I arrived at the funeral home at St. Mary’s Hospital in Gangnam, I was a bit surprised at the efficiency of the establishment. I quickly observed that funeral homes (always located in hospitals) are much like Korean wedding halls: practical one-stop shops to satisfy every need of the client. At the entrance, there was a spot to rent funeral clothing, a shop selling urns and coffins and an area to order flower arrangements (which, surprisingly, look almost exactly like the flower arrangements found at Korean weddings and grand openings of restaurants and electronics stores). 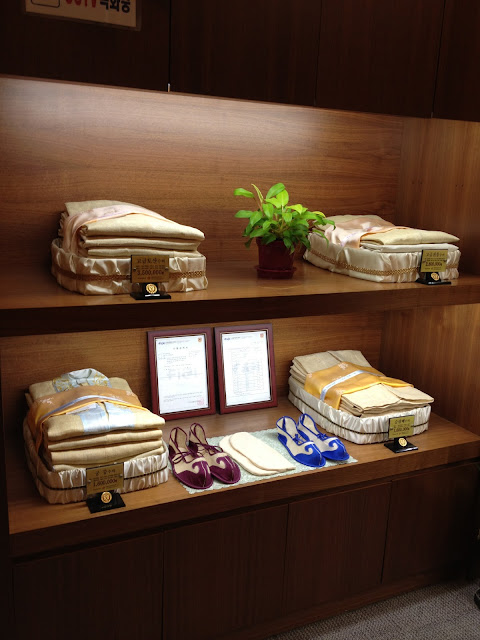 Another thing I noted was that there were many funerals going on at the same time in separate rooms. There wasn’t much privacy and some of the services were quite loud. After finding my friend’s family’s room, I signed my name to the guestbook and put my monetary offering — 50,000 won is the going rate — in one of the white envelops at the entrance. This is a custom carried out at Korean weddings, as well, and is practiced to help the family with expenses. It serves as a type of insurance, and the value one gives is noted so that it can be returned during future funeral or wedding events of the donor.

As I entered the memorial area where my friend and her family waited, I approached her father’s coffin, which was adorned with flowers and a single photograph of him. I performed a deep, 90-degree bow to show my respect. I then turned to my friend and her family and bowed again, a common funeral custom among Christians. Had my friend’s family followed Confucius customs, I would have bowed with my head to the ground.

My friend and her mother were dressed in black hanbok and her brother in a suit with a hemp arm band. As the oldest son, he was responsible for welcoming visitors and ensuring that customs were carried out properly. My friend’s mother was quite hysterical at times, shouting, sobbing and unable to stand up on her own. This behavior is actually expected of the family and funerals are one of the few times that Koreans are supposed to show their emotions. In fact, it’s said that how much one cries is indicative of how faithful a spouse or how filial a child is to the deceased.

After offering my condolences, I sat at a table across the room.  Here, I was served some basic food and was offered alcohol.  Although the mood was somber, friends and family (also dressed in black) were encouraged to drink soju and beer.  I stuck around and talked with my friend, but noticed that most people came and went, staying only a short half hour or so.

Although I can’t be sure, it seemed that most conversation was small talk and the subject of death was totally avoided. In the West, we enjoy reminiscing about funny stories or happy times of the pasts of our deceased loved ones.  Coming from a culture of jazz funerals and toasts to the departed, I found the funeral service a bit impersonal and depressing.  Perhaps this could have been a result of the language barrier, but it was my general feeling, nonetheless.

After my friend and her family were summoned to have a final visit with her father, I left.  My friend later told me that they would have him buried at a plot with a number of unknown people for a period of 50 years. Although Koreans have traditionally buried their loved ones in mounds on mountains, land is becoming sparse here in the small country of Korea and there are certain geographical requirements for burial to assure the spirits are safe and sound. Because of this, Koreans have had to get creative with how they bury their family members. I suppose the 50-year burial is one of these methods, though I’m still unclear as to what happens to one’s remains after the burial expiration date. 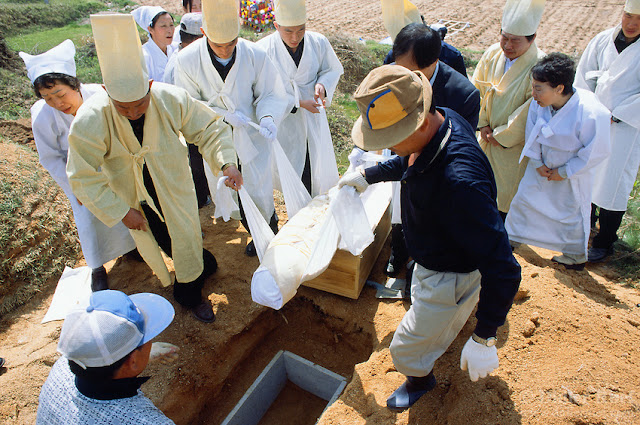 Traditional funerals like the one pictured above aren’t as common these days, but are still carried out in smaller towns and villages throughout Korea. (Photo)

Even after the initial funeral rites are over, preparations for jesa, memorial rites, are made. The place of burial is visited on the anniversary of the deceased’s death, as well as during special holidays like Chuseok.  The burial grounds must be cleaned and well maintained to ensure the ancestors’ spirits are happy.  Bows are performed, food is offered and prayers are said to the ancestors.

Because of increased working hours and ridiculous holiday traffic, travel has become increasingly more burdensome in recent years in Korea. Some companies have begun to offer unique services to make these rites more convenient for relatives that live far from the burial grounds of their ancestors. Although some provide practical services, such as maintaining graves, others are far more surprising. Virtual ancestral worship is a newer service in which a video camera is set up at one’s ancestors’ graves, so families can perform rituals without ever leaving their living rooms.

Although Korean funeral practices have transformed over the years and are changing even still, it is obvious that the faithfulness Koreans have to their deceased loved ones is constant. From the initial funeral rites to memorial services held annually, the people of Korea work hard to pay their respects to those that have gone before them.

Despite my feelings about the funeral I attended, I have to admit that the dedication and commitment displayed speaks volumes about the importance the institution of family plays in Korean culture, which is one aspect of Korea I hope never changes.