By Mimsie Ladner on Sunday, February 24, 2013
There’s something about cupcakes that elicits memories of childhood and better days.  It’s impossible to be anything but happy when eating them, as they are treats for both the taste buds and the eyes.  Unfortunately, in Korea, cupcakes, and most baked goods for that matter, haven’t always lived up to this reputation, as key ingredients are often left out or changed to please Korean palates.

The good news, though, is that there seems to be somewhat of a cupcake renaissance taking place here in Seoul.  Pâtissiers and baking enthusiasts alike are working hard to perfect the cupcake to meet the demands of those sweet-toothed folks wanting the real deal.

Over the past month, I made it my mission to seek out some of the best cupcakes in the city.  Continue reading to see what I found on my cupcake quest. (Disclaimer: Information was current at the time this post was written in February 2013. Please double check to be sure that the businesses are still open before visiting.) 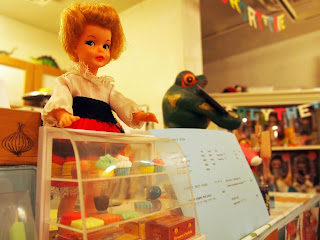 Nestled in the quaint neighborhood of Buamdong is Shortcake, a cute cafe reminiscent of Grandma’s house.

Upon entering, I was easily distracted by colorful trinkets, dolls, mobiles, and a giant dinosaur head scattered throughout the small shop, but it didn’t take long for my attention to be drawn to the display case of cupcakes at the counter. I was intrigued by names like Rasberry Butterfly and Banana Bear but settled on a beautifully frosted Mint Choco (4,500 won).

The chocolate cake was not bad.  It had just the right amount of sweetness, but it it could have been more chocolatey.  The mint butter cream icing was thick and creamy but the mint tasted off, like something was missing.

I wasn’t completely satisfied by my first cupcake find, but did enjoy the charming atmosphere of the cafe.  Shortcake is not worth the out-of-the-way trek to Buamdong but it is a nice spot to relax when in the neighborhood. 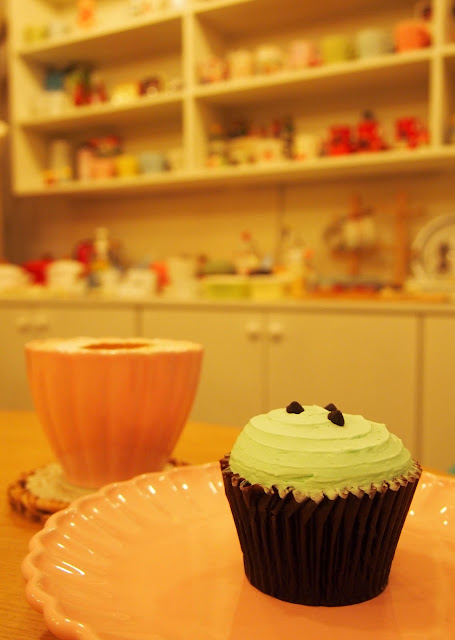 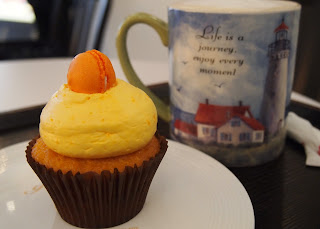 It’s easy to work up an appetite after a day of boutique hopping and people watching on Garosu-gil, Seoul’s trendiest shopping district.  Gentlelady Cupcakes, located on a side street just off the main strip, is the perfect place for a snack with shopping companions.

Don’t let the cafe’s strange name mislead you, though. There were plenty of men present in the cafe when I was there and I have no doubt that they were fully enjoying themselves, caring less about the feminine nature of the cupcake and more about satisfying their taste buds.

Gentlelady’s Carrot cupcake, shaped like a snowman head, is a best seller, as is Blue Berry.  Wary of anything too cute or with purple icing, I opted for Orange and was extremely satisfied with my choice. The cake was moist and had little bits of citrus baked right in which created a nice texture.  The icing was perfect and Creamsicle-like, a perfect match for the cake. 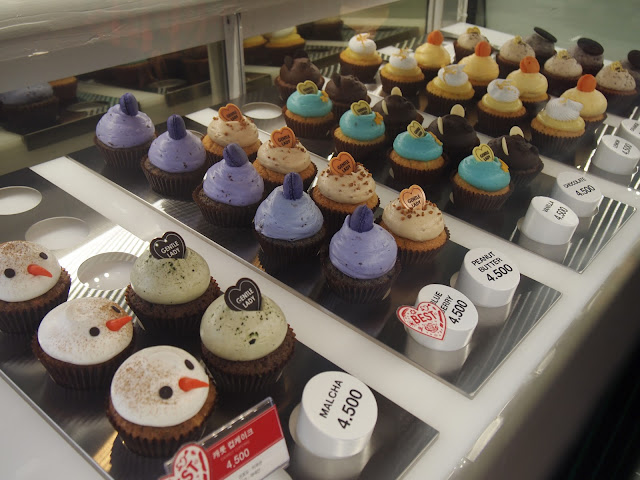 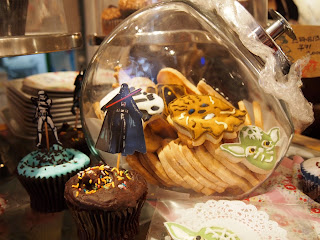 On a random day wandering around Hongdae, I happened upon a cafe that seemed just like any other Korean cafe from the outside.  The cupcake sign peaked my interest and it wasn’t until I was inside that I realized this place was not your typical coffee house.

A rather peculiar collection of dolls (Glamour Barbie meets Goth Ball-And-Joint) sat in display cases built into the cafe’s walls.  There was also a bit of Star Wars memorabilia guarding the counter. I ignored the plastic eyes watching me as I examined the cupcakes on display.

I grew excited to learn that there were mini cupcakes for sale, as I knew this meant I could try out a few flavors.  I ordered Vanilla Blossom and Red Velvet (2,500 won each) and the generous owner included a Carrot mini as “service”.

The Vanilla Blossom was okay.  It had a very light vanilla taste (almost unnoticeable) and the icing was decent.  I was a bit let down by the Red Velvet, which was good but tasted nothing like red velvet.  The Carrot, which was given to me for free, ended up being the best.  It was spicy, carroty, and had a perfectly creamy icing.  Ahhh… cupcake redemption.

Get There: Seoul, Mapo-gu, Hongdae [In the alley to the left of Tom’s Cat Cafe near the Hongdae Playground.] 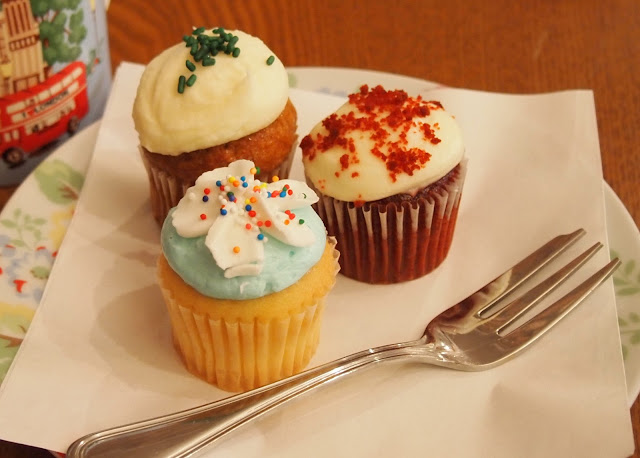 Try the mini cupcakes at Vanilla Cupcake to sample a variety of flavors. 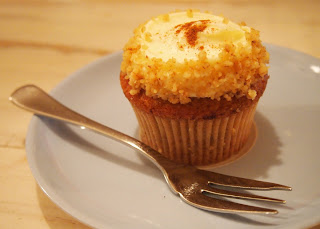 Despite Itaewon’s less-than-honorable reputation, it does have a sweet side.  Nowhere is this more apparent than at Lee Saem, also known as Life is Just a Cup of Cake.

The cafe’s decor- cupcake trees and wooden accents- is welcoming but the sweet aromas that hit you upon entering are really what makes this place a gem.

The cafe prides itself on its organic ingredients and imports all of its chocolate from France and Ghana.  There’s a nice variety of unique flavors, from Double Green Tea to Blueberry Cream Cheese to Earl Gray.

I tried the Carrot cupcake (4,800 won), which was served on a darling Cath Kidston dessert plate.  It was decorated so beautifully I was hesitant to eat it.  But, only for a few of seconds.  My attempts at small bites to savor the perfect flavors were short-lived, as I couldn’t help but inhaling the creamy carroty goodness.

I may or may not have ordered a second.

Get There: Seoul Yongsan-gu Hannam-dong 738-16 [Past Itaewon station, on the way to Hangangjin Station. Pass the Itaweon hotel and take the 2nd alley on the left.] Closed Sundays. 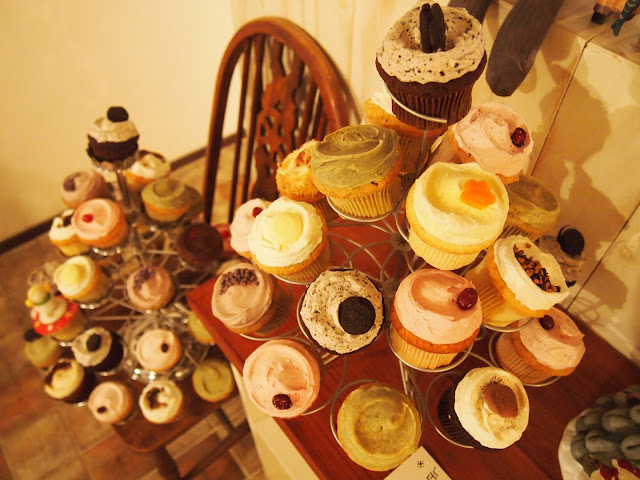 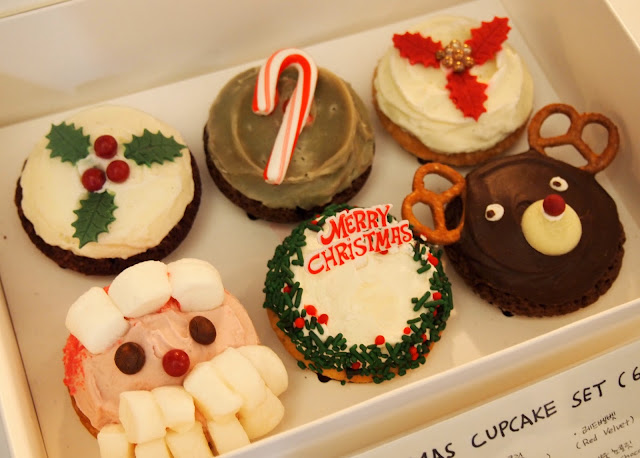 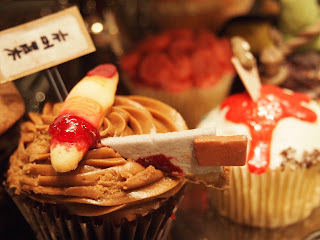 Although I have mentioned Noksapyeong’s Monster Cupcake in a previous post, I thought it deserved another mention, as it is hands-down the most unique and arguably the tastiest cupcake shop in all of Seoul (and probably Asia).

Inspired by classic horror movies, the monster motif at Monster Cupcakes makes it feel as if Halloween is every day.   The artistry of the cupcakes is extremely impressive, as are the icing details, like sharpened knive blades and Frankenstein feet wrinkles. Usually in Korea, the more beautiful a dessert, the worse it tastes.  Fortunately, this is not even close to being true at Monster Cupcakes.

On my last visit, I was craving red velvet but the Tiramasu (4,800 won) was far too cool looking to pass up, so I opted for the latter. The vanilla cake was topped with a light cream and rich chocolate and coffee flavors. There was a cookie in the shape of a tombstone that was just as tasty. A bat and ghost were also added to complete the edible art. 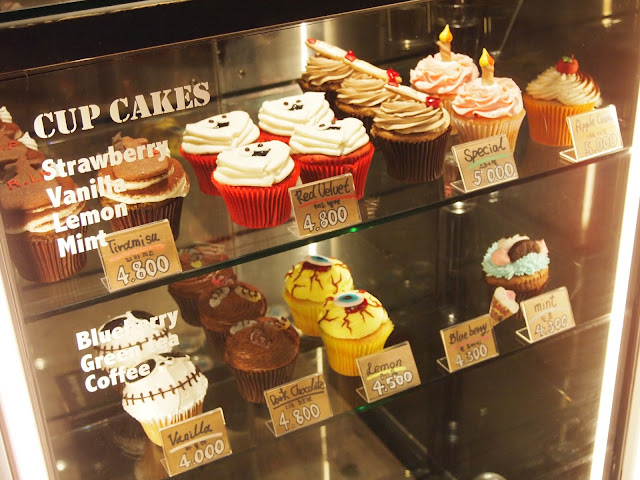 Cupcakes that will make you scream… with delight!

Although I wasn’t impressed with all of the cupcakes I tried, there were a few hits and I wasn’t ever completely disappointed.  Each cupcake shop was entirely different from the next, but all had one thing in common.  At each cafe, I noticed that the owners and bakers behind the counter all had an undeniable look in their eye as they mixed and iced with precision: passion.  It’s that very passion that lets me know that the although the art of the cupcake is a work in progress, it is being perfected.  Some have figured it out, some haven’t quite gotten there.  Either way, things are looking up for us cupcake-craving folks, as Seoul is no longer a cupcakeless city.