By Mimsie Ladner on Saturday, March 23, 2013
There’s no question that Seoul is a city for art lovers.  From internationally renowned museums to obscure independent galleries, there’s a space dedicated to just about every genre and medium of visual art.  But it’s not only in galleries that masterpieces can be found in the Korean capital.

Urban art, also known as street art, is becoming more common throughout university neighborhoods like Hongdae and Shinchon.  Many of the murals that can be found in these areas are expressive and offer insight into Korean culture.  Still, few of these art spaces are as unique and aesthetic as those in Naksan Park in northern Seoul.

Nak Mountain, or Naksan, was one of the mountains that guarded the eastern boundary of Seoul during the Joseon Dynasty.  Much of the mountain was demolished during Japanese rule and later became a residential area for the working class of Seoul.  By the 1970s, factories and shacks began to pop up throughout the area, turning it into nothing more than an eyesore.  Fortunately enough, the Ministry of Culture and Tourism recognized the potential of the neighborhoods surrounding Naksan and began efforts in 2006 to transform them into cultural art spaces. 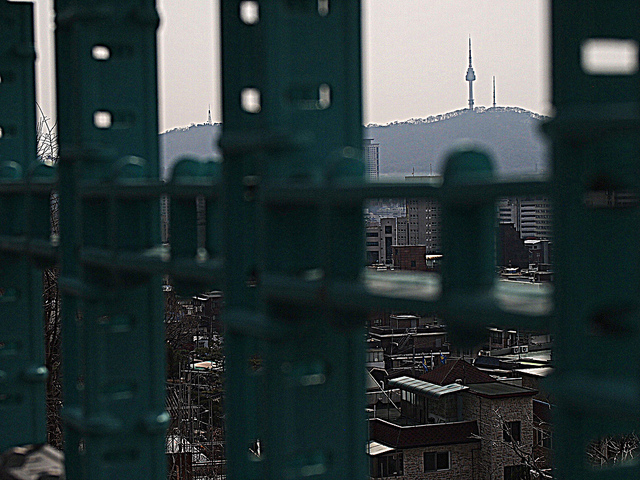 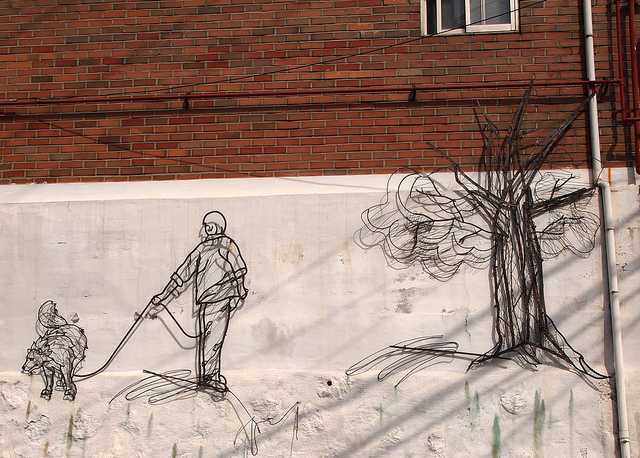 I took advantage of the recent warmer temperatures and headed up to Naksan Park last weekend to get a breath of fresh air, after having hibernated indoors for the past few months.  There were a number of maps posted on the routes leading up to the park, but I found that the best way to see the area was by wandering aimlessly.

Along the streets that wind through the somewhat still-dilapidated homes are a collection of art instillation, sculptures, murals, and signboards created by over seventy different artists.  There were some rather creative pieces strewn throughout the park’s footpaths, and while some of them were in plain sight, I found delight in noticing the more obscure ones that required a bit of effort to find.  I particularly liked the sculptures that looked out over the city.  Their silhouettes set against the skyline of Seoul was art within art… really something to see. 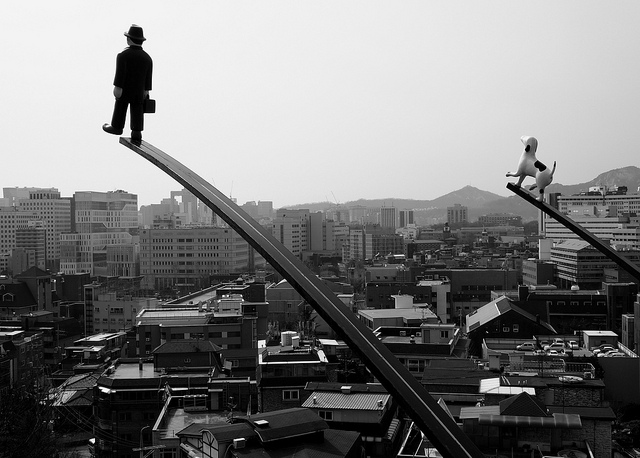 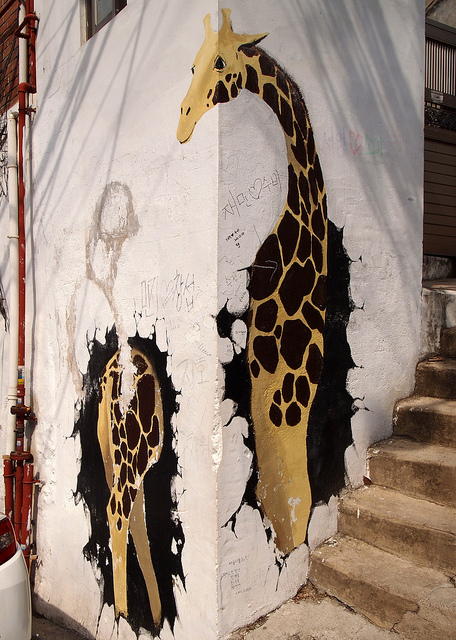 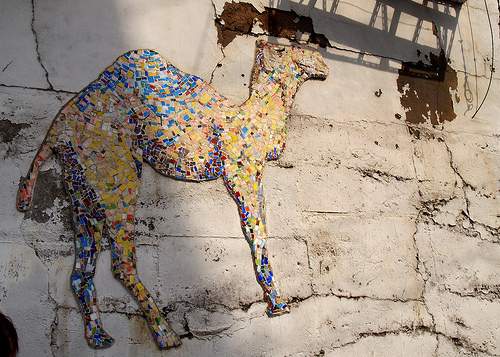 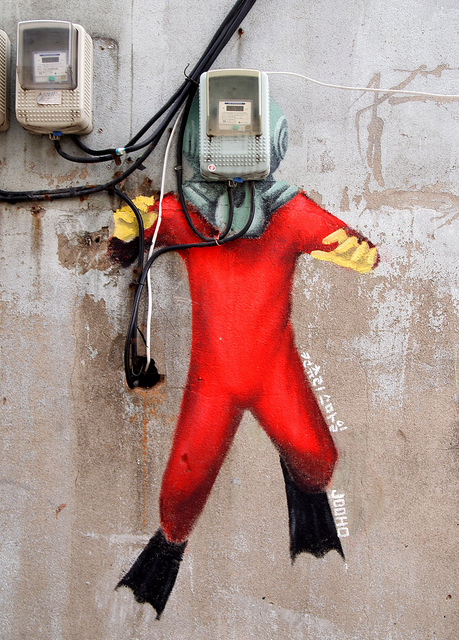 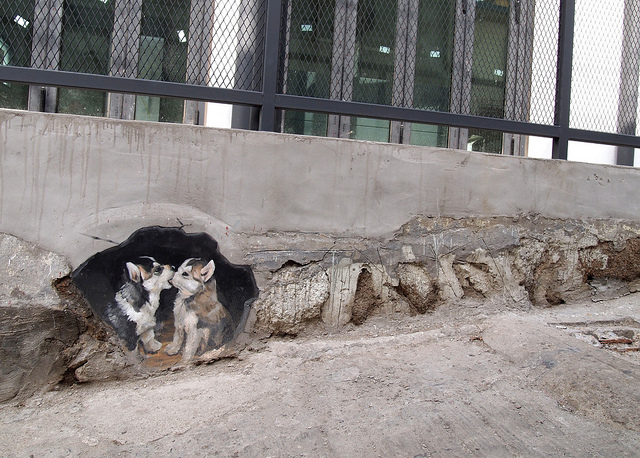 Although the beautification efforts have brightened up the area, it is obvious that the neighborhood is still a bit run down.  I, however, find this aspect about Naksan (and adjacent Ihwa-dong) charming.  While walking through the streets, I imagined that what I was seeing was what Seoul must have looked like during the 70s.  Power lines criss-crossed dangerously from one house to another.  Kimchi pots sat on chipped tiled roofs.  Toothless grandmothers haggled over the price of a bunch of garlic.  Yes, this was the real Seoul, with a touch of modern urban art. 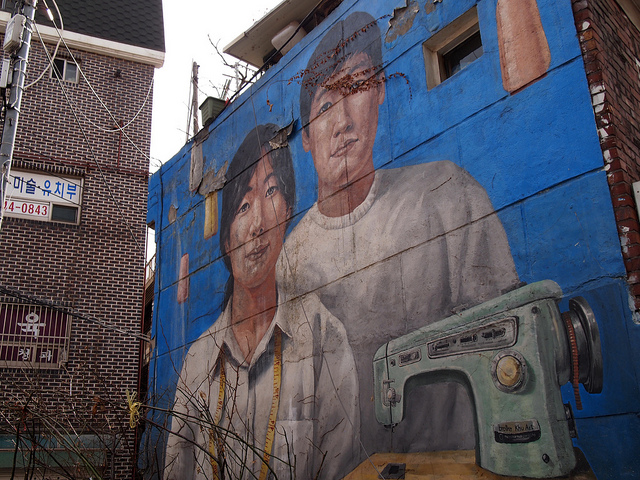 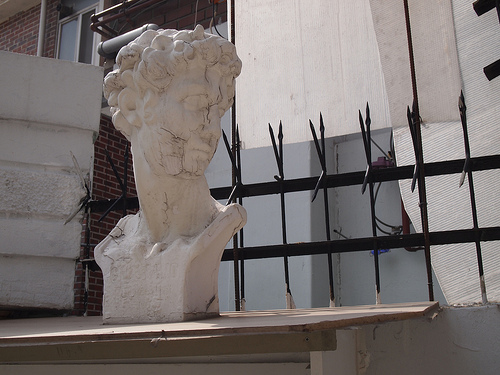 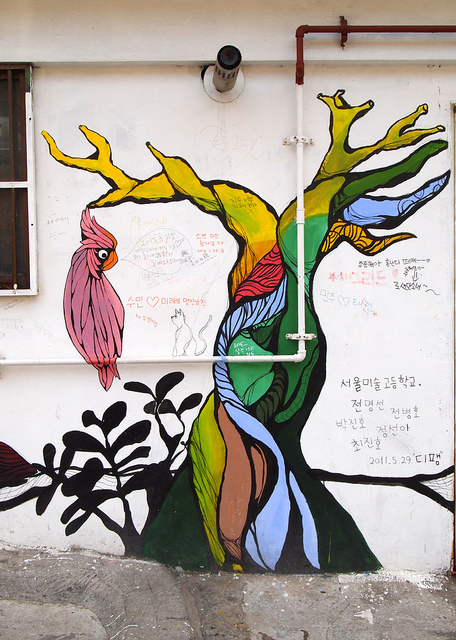 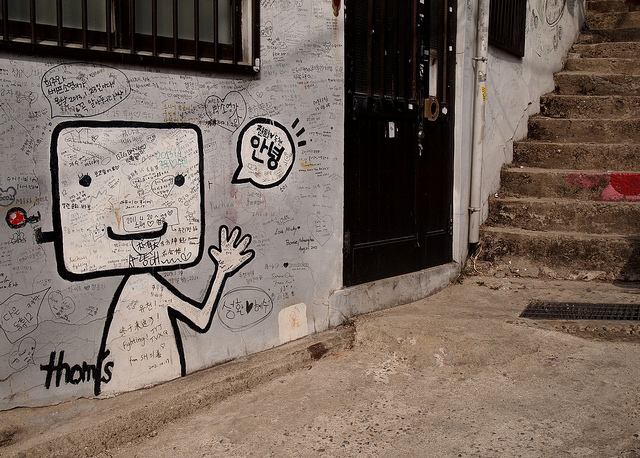 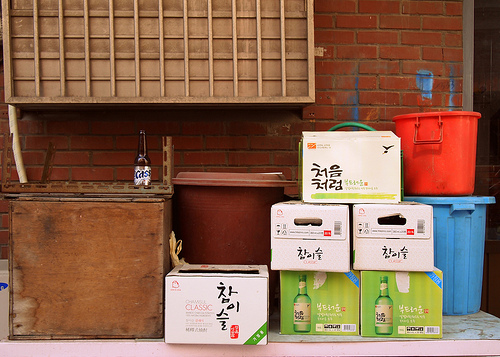 After getting my fill of street art, I claimed a spot on the Seoul Fortress Wall and hung out there for a while, taking in the hazy but breathtaking views of the city.  Who knew that fresh air could be had right in the middle of Seoul?

A trip to Naksan is many things.  A getaway from the hustle and bustle of Seoul.  An open-air urban art experience.  And, best of all, a trip back in time.

To Get There:  From Hyehwa Station (Seoul Subway Line 4, Exit 2), go straight for 200 meters.  Turn left onto Dongsung-gil Street.  Walk straight for about another 200 meters until you reach the Lock Museum.  Follow the mural for 50 meters and turn right onto Naksan Gongson-gil Street.  Walk straight up the hill to Naksan Park.  [There are many signs that will point you in the right direction.]

All photos and words by Mimsie Ladner of Seoul Searching. Content may not be reproduced unless authorized.