After much anticipation, I have finally made it to Korea. The past week has undoubtedly been a whirlwind of chaos, but everything seems to be falling into place. Mom and I went to Houston last Tuesday for my interview with the Korean consulate, and picked up my visa later that afternoon. Upon our return on Wednesday, I continued the packing that I had started previously, and have found that this was the most difficult of the entire moving abroad process. In the end, my two suitcases and carry on met the maximum allowance, so I was happy. Flew out of New Orleans, transferred in Atlanta for the 16 hour flight to Seoul. My plan to not sleep to avoid jetlag ended up working flawlessly, though I was so exhausted by the time that I arrived, I could have easily been mistaken as a drunk wandering the streets.

At this point, I had been so busy taking care of my to-do list, I literally had no time to think about what was going on, or to let the reality of it all set in.

I picked up my 150 pounds of belongings and thought that I was getting it all too easy when my taxi driver ended up speaking some English as he met me by the airport exit. The drive from Incheon to Seoul was a long one, especially with the Saturday evening traffic. The city was certainly a sight. Seoul has a hilly-mountainous terrain, so it is even more obvious how buildings and homes are all built on top of each other. Just when you think that you are getting out the main part of the city, it continues to stretch and extend. Forget Europe… Mexico… New Orleans, even… these drivers are flat out insane. I found it easier not to look around me for the entirety of the trip.

Seoul is such a big city that people who have lived there for their entire lives still don’t know where the majority of streets and landmarks are, so all have GPS built into their cars. This was the also the case for my driver. As he pulled up to the building to drop me off, I thought to myself that it didn’t look anything like the school that I had researched on the internet. Still, dazed, I got out, collected by baggage and roamed in, only to have about ten people in wheelchairs looking at me. There were no signs. No phones. No English speaking people. This was my “what-in-the-hell-have-you-gotten-yourself-into” moment, that I had figured was inevitable at some point on this moving to Asia scheme. As it turned out, I was in a rehabilitation center, which explained some of the odd looks I was getting. Dragging my luggage down the street, I came across two Korean men who were able to interpret the Korean directions I was given by my employer. Fortunately, they helped me find my way to the school, where I was greeted by yet more Korean-speaking guards who brought me to my apartment. Finally… I made it up the numerous hills and stairs and passed out. Though my mattress is reminiscent of what Fred Flinstone might have slept on, I had a terrific sleep.

When I woke up, I walked around the campus and realized that not a single person was around. Instead of sitting around watching Korean soap operas, I decided to venture out. I hopped on a bus, not knowing where I was going and set off. It was not long before I realized that I was the obvious minority, which is an extremely odd feeling if you’ve never experienced it. A young girl stood about a foot away from my face and stared at me, mumbling things in Korean, until I exited. Uncomfortable, but apparently not uncommon. I found a market where I was able to perform enough charades to find coca-cola, which led me to do some grocery shopping. One thing I learned is that wondering through the markets at 9 in the morning doesn’t do great things for the stomach. The scents are many and often unidentifiable, though I was able to pick out a lot of kimchi (fermented cabbage in chilli sauce) and seafood, including live octopus and eel. Next to such a vendor, you can find high end-clothing, while on the other side, an assortment of brooms, plates, toothbrushes, and belts. Very random. 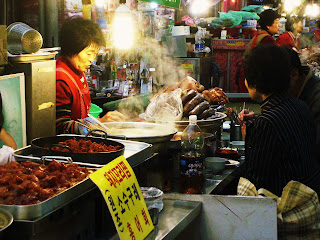 At this point, I found myself experiencing a bit of sensory overload, which I later recognized as culture shock, so when I stumbled upon a French bakery, I grabbed a ham croissant and gelato for lunch. Which, ended up not being ham and cheese, but some other mystery meat and sauce. I still don’t know what I’m eating half the time, but I guess it’s better that way.

Yesterday, I walked out of my apartment to meet another new teacher from Ireland, so many of my anxieties were eased knowing I was not the only one who didn’t know what was going on. We found our recruiter, and received an orientation. I got a bank account set up and I was then brought to a hospital to have a full workup, as required by the Korean government. I’m not going to lie- I was a bit nervous in this hospital. I’m thinking that Korea doesn’t place even a third of the emphasis that the States does on sanitation and infection control. I tried to ignore this fact. Grabbed a cheeseburger at McDonalds (only because I could point to a picture), and noticed that the McDonalds here has a bike delivery service. 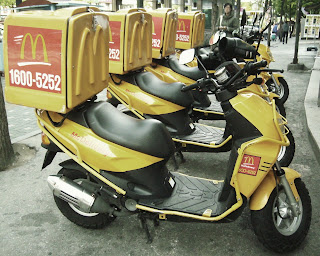 I found this pretty amusing. Just as amusing as the shrimp burger on the menu. 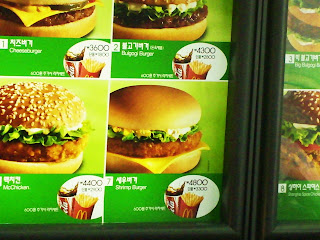 I walked around some markets, and marveled at the multiple 20-something story department stores in this area of Seoul. The weather was bad, but I will without a doubt be returning to explore these.

I continued to meet more co-workers throughout the day who have continued to be incredibly welcoming and hospitable. There are American, Canadian, Irish, Australian, Scottish, and English foreign teachers and English speaking Koreans who all seem to be very laid back and helpful people.

Tonight I went out with a group of the foreign teachers for my first traditional Korean meal, and I have to say, I was highly impressed. As with most restaurants in Korea, you must take your shoes off at the door and sit on the floor around the table. At this particular restaurant, there are gas stoves in the middle of the tables and the waitresses boil chicken, potatoes, and rice cakes in a tasty broth while you concoct your appetizer of fresh cabbage, garlic, chilies, hot mustard, and soy sauce. Korea is very big on their side dishes. Next, noodles are added with some greens to create the Korean chicken noodle soup. The food is amazing, but what is even greater that all of this plus a drink is about $6. We walked around Suyu (the neighborhood where I live) and I was able to see it for the first time at night. It looks and feels like Times Square, covered in neon. I’m interested to see what the “busy” part of Seoul looks like. Things really get hopping in the evening. From what I’ve heard, people do their shopping, eating, drinking, kareoking, and eating again in the later hours of the evening. 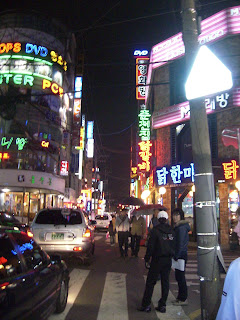 My first street food encounter was excellent, considering it was dessert. I tried Hoddeok, which are sweet pancakes stuffed with ooey-gooey goodness of cinnamon and brown sugar- I think. I hate to say it, but they top benigets. 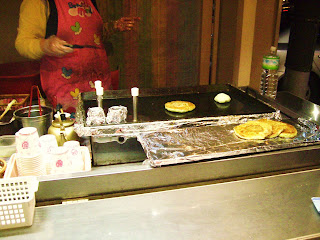 It’s all starting to hit that I am living in Asia, but the transition is becoming quite easy and I am already starting to feel comfortable. I’ve found that knowing a few words in Korean goes a long way, so I hope to continue to learn.

I promise not to keep my blogs this long, so I will be updating more often. Hope everyone is well!