By Mimsie Ladner on Saturday, August 3, 2013
N’Seoul Tower. Gyeongbokgung. Myeongdong. Garuso-gil.  Very few tourists come to Seoul without these must-see attractions at the top of their to-do lists.  And for good reason, as each offers a unique insight into Korea’s capital city.  However, there is a different Seoul waiting to be explored by the more curious traveler.  In fact, there is a myriad of destinations perfect for the adventurer looking to venture a bit further off the beaten path. Read below for a list of my favorite places to experience Undiscovered Seoul.

10.  Namseong Market: Although Seoul is packed with obscure traditional markets waiting to be discovered, Namseong Market near Isu Station is totally off the radar to most.  Because of its small size, it doesn’t take long to explore, but its limited amount of space demands a kind of intimacy and crampedness that creates a unique market atmosphere.  Here, pig heads hang from butchery windows, elderly women arrange towers of Tupperware in their storefronts, and clamorous salesmen compete for customers at their vegetable stalls.  There is even a shop that offers live turtles and eels that swim freely in tubs, tempting passerby with more adventurous tastes.  Be sure to visit the market around 6PM for the full effect.  (Get There: From Chongshin University [Isu] Station, Exit 14, make a U-turn and take the first right.)

9. Pyeongchang-dong: Nestled amongst hills in northern Seoul sits Pyeongchang-dong, a mostly-residential neighborhood shrouded in nature.  Pyeongchang-dong is home to some of the city’s wealthiest citizens from dignitaries to celebrities and the exquisite Western-style mansions in the area make this obvious.  So much so, in fact, that many dramas and films have been set and/or filmed here for effect (Secret Garden, Coffee Prince, and The Greatest Love to name a few).  In addition to boasting luxurious homes of the rich and famous, the neighborhood is dotted with a number of art galleries and high-end cafes.  (Get There: From Exit 3 of Gyeongbokgung Station, take bus 1711 or 1020 to Pyeongchang-dong Samsung Apartments.) 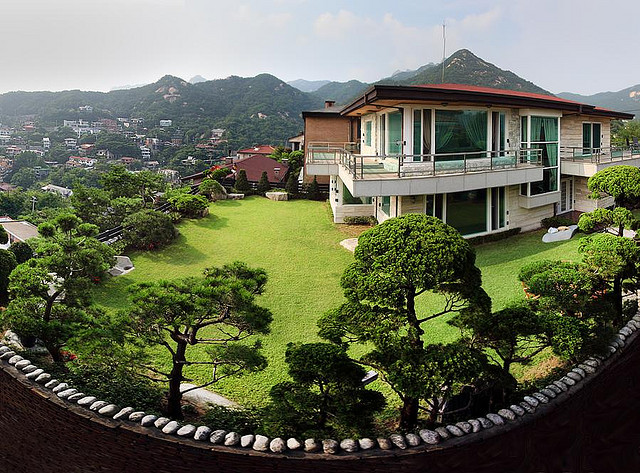 Pyeongchangdong is one of the few neighborhoods where Western-style villas stand in place of high-rise concrete apartment buildings. [Photo: Sam Wigginton]

8.  Seogyo-dong:  Visiting Hongdae, the youth district of Seoul, is an absolute must when traveling in Korea.  Many flock to the area for its street art, funky fashions, and outstanding nightlife.  What many don’t realize, however, is that Seogyo-dong, an adjacent neighborhood, is equally as impressive.  Although it may be Hongdae’s calmer, more mature neighbor, it’s vintage boutiques, cozy cafes, and classy restaurants appeal to all ages.  Recommended spots are Cafe Ronin, a quaint coffee shop and wine bar that screens silent black and white films and Sukkara, a Japanese-inspired all-organic eatery that’s constantly packed with an eclectic mix of the city’s vegans and bohemians. (Get There: From Hongik University Station, take a right from exit 8.)

7.  Central Asia District:  In the late 1980s, Russian clothing traders began setting up shop in the neighborhood of Gwanghui-dong to have easy access to the fabric and textile markets of Dongdaemun.  Nowadays, the area is home to thousands of natives of Russia and neighboring post-Soviet states.  The streets of the district are saturated in Cyrillic signage and boast a number of Russian-style karaoke bars and bakeries.  Visit one of the many Russian or Uzbek restaurants to sample savory borsch, honey-smothered pancakes, and of course, vodka.  Lots of vodka. (Get There: Walk straight from Dongdaemun History and Culture Park Station, Exit 7.) 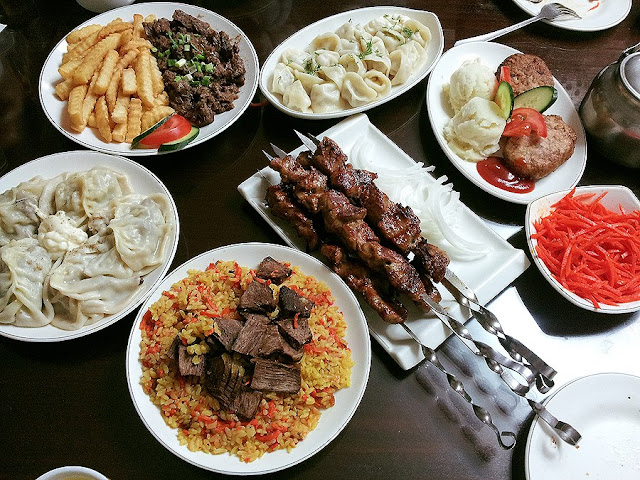 A spread of traditional Russian fare at a restaurant in Seoul’s Central Asia Village. [Photo: Lacrymamosa]
6.  Nodeul Station:  Just a short stroll from the Noryangjin Fisheries Market is Nodeul, another neighborhood unknown to most visitors and locals.  Because of its proximity to the Han River, scenic views of the 63 Building and the city’s skyline are plentiful in the area.  Sayuksin Park is a quiet, peaceful green space made up of historical tombs, small walking paths, picnic tables, and the obligatory Korean workout equipment.  A path down the Hangang Bridge will lead to Nodeul Island, where farmers and beekeepers can be found working hard to create a new culture of urban agriculture.  (Get There: Walk straight for five minutes from Nodeul Station, Exit 1.)

5.  Ihwa Art Village: During Japanese colonial rule, much of the area of Ihwa-dong on Naksan Mountain was demolished and later became a residence for Seoul’s working class.  It continued to fall into shambles until 2006 when the city government began beautification initiatives to improve residents’ quality of life.  Nowadays, along the streets that wind through the somewhat still-dilapidated homes of the neighborhood are a collection of creative art instillations, sculptures, murals, and signboards created by over seventy different artists.  There are also some incredible views of Namsan Mountain, N’Seoul Tower, and the surrounding downtown area. (Get There: Hyehwa Station, Exit 2.) 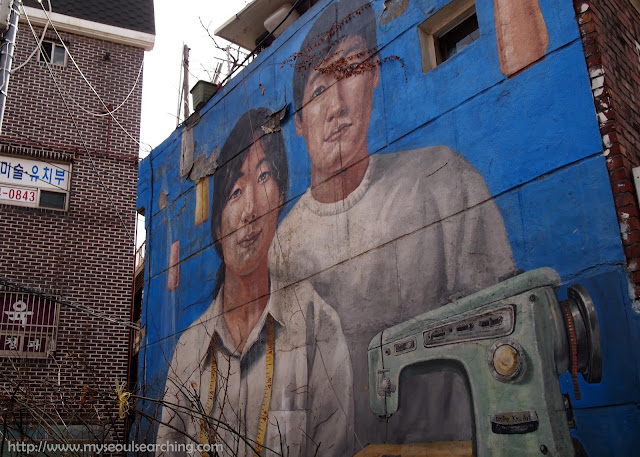 A wall mural in the rustic Ihwa Art Village.

4.  Euljiro 4-ga Station: See the gritty, gasoline-glazed side of Seoul by exploring the market streets of the Euljro district.  From lighting fixture stores to welding workshops, visitors to this area can experience what Seoul was like in the 1970s.  Also located in the area is Gwangjang Shijang; although not unfamiliar to tourists, its back alley restaurants are often only visited by those with a great deal of culinary curiosity.  If you’re feeling brave, dine in the market’s Yukhoe Alley which boasts a small cluster of raw beef specialty restaurants. (Get There: Euljiro 4-ga Station, Exit 4.)

3.  Suyu-dong:  Like Euljiro 4-ga, the neighborhood of Suyu offers its visitors a bit of something more difficult to find in the southern districts of the city: authenticity.  Get a feel for old Seoul in Suyu’s traditional markets or in one of the area’s many mom-and-pop restaurants.  Or, for the more introspective, seek inner peace on a temple stay or meditation retreat at Hwagye Temple, home of orthodox Zen Buddhism.  The temple offers flexible temple stays in both English and Korean in a peaceful setting with beautiful views of Seoul’s mountains. (Get There: Suyu Station, Exit 3.)

2.  Konkuk University (Keondae): There’s always a party going on in Seoul and while many flock to areas like Gangnam or Itaewon to find it, most often overlook the city’s up-and-coming nightlife spot: Keondae.  This university neighborhood is essentially street after street of affordable restaurants, cheap clothing boutiques, and quirky bars.  For unique experiences in the area, dine in darkness at Blind Art Restaurant, or sip beers at Ssukee Maekju (쑥이맥주), a nostalgic bar in the form of an old-fashioned Korean bus.  (Get There: Konkuk University Station, Exit 2.) 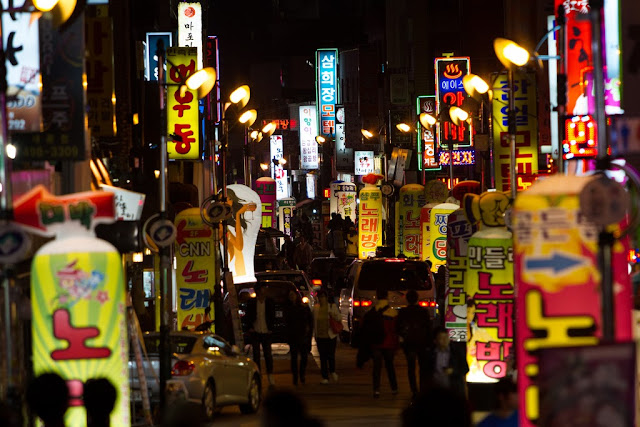 1.  Inwangsan: Few places in Seoul combine elements of nature, history, culture, and religion as well as Inwang Mountain.  Situated in northern Seoul, the mountain is made up of some impressive trails, many of which follow along the Seoul Fortress Wall.  Also scattered throughout the mountain are Buddhist temples and sobering shamanistic shrines where exorcism rites and healing services are still held today.   The shamans’ spiritual chants create an eerie mood, as do the giant rock formations that resemble skulls and goblin teeth.  Despite the otherworldly atmosphere the mountain embodies, the views of the city are breathtaking and are a reminder that visitors to Inwangsan are in fact in the middle of one of the world’s biggest cities. (Get There: Follow the signs from Dongnimmun Station, Exit 2.) 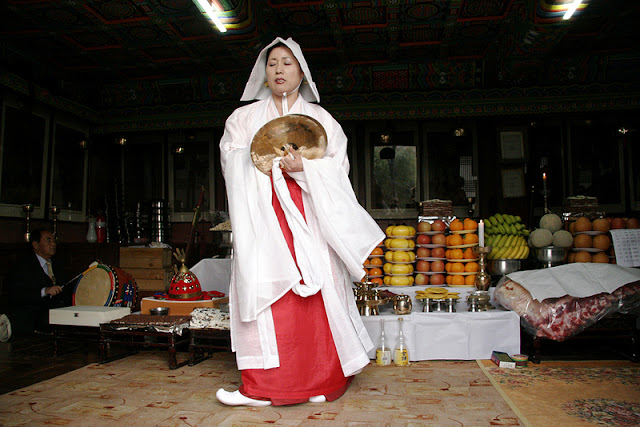 A shaman performs a ritual on Inwangsan. [Photo: Gemma Thorpe]

Now that you know where to go, what are you waiting for?  Get out there and start Seoul Searching… off the beaten path!

Words by Mimsie Ladner of Seoul Searching.  Photos have been credited to the owners.  Content may not be republished unless authorized.