Nice Day for a Korean Wedding

Standing in line for lunch, a younger student saw my Mignon Faget ring that I wear daily and asked me, “Teacher, are you married?” This didn’t surprise me, as I get this question a lot from the students. “No,” I replied casually. “Well, do you have a boyfriend?” “Nope,” I continued. “Teacher, why? When do you want to get married?” I did not tell her that I have no intention of getting married anytime soon, because I knew her response would be something along the lines of, “Teacher, that’s crazy.” Instead, I pointed to the Cinderella sticker on my nametag and asked her if she knew the story. “When I find my own prince,” I told her. She smiled and said, “Teacher, my brother is 24. You can marry him.”

For Koreans, marriage is not a question of “if,” but rather,”when.” In fact, almost all Koreans live with their parents until they are married. (Love motels are institutions that have been created for this very reason, but that’s a future blog post.) Even after this, parents will often times move in with the eldest son and his wife. There’s much pressure from parents to wed, as marriage is not only a ceremony of love, but is an institution which has financial and social networking benefits for both sides of the family. Marriages are no longer arranged in most parts of Korea, but familial approval is highly influential in the final say so. In addition to this, it is not uncommon for couples to be wed within a few months of meeting each other, usually on a blind date set up by friends or family members.

For an interesting look into the process of this matrimonial transaction, if you will, check this out.

I was fortunate enough and honored to be invited to a Korean co-worker’s wedding this weekend. It was quite different than Western ceremonies, but was interesting, nonetheless. Most weddings, like the one I attended, are held at wedding halls. The room in which the ceremony took place was nicely decorated, with lights overhead that changed from blues to greens to purples at any given time. Many attendants were dressed in hanboks, traditional Korean clothing. Despite this, the wedding had a very informal feeling to it, as some people were on their cell phones or chatting throughout the entire event. 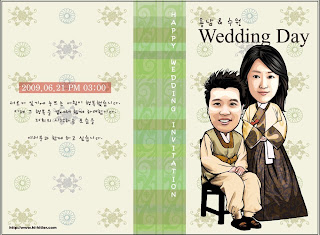 The wedding invitation: including a “cartoonized” picture of the bride and groom. So cool! 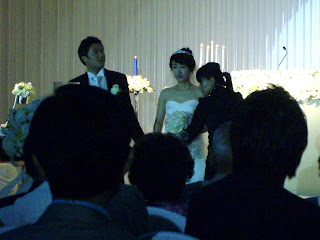 The groom, bride, and the primper.

My co-worker, Winnie, the bride, walked down the aisle with her groom in modern wedding attire. Once they made their way to the front, a slideshow of pictures was played while a gentleman narrarated on a microphone. While these are common during a reception or rehearsal dinner in the West, I was surprised to see them during the actual wedding. There was no bridal party, but there were people on the stage tugging wrinkles out of Winnie’s dress or patting the forehead of the groom with a makeup sponge through the entirety of the wedding. This was quite unusual compared to the formality of the matrimonial ceremony that I have grown so accustomed to and a bit annoying if I might say so.

I didn’t know what was going on during most of the ceremony, as it was in Korean. At one point, men walked up to the stage to bring single red roses to Winnie. Another time, the bride and groom presented gifts to their parents, initiating the formal bow that is associated with special events and holidays in Korean culture. The bride and groom shared a dance to “How Do I Live?” by Leann Rimes. Classic. There was even a time when the groom played the piano, serenading his new wife. It was quite cute. My favorite part of the wedding ceremony was when the groom and some of his friends, I assume, took the stage in sunglasses and performed a dance for Winnie. 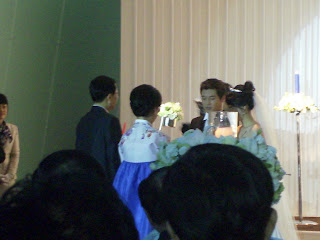 The bride and groom bow and present a gift to the groom’s parents.

Afterward, we signed our names in the guestbook and presented our gift. Here, wedding gifts are usually cold, hard cash in a white envelope. We then attended a buffet banquet of everything from sushi to casseroles to cheesecake. Guests eat even before the bride and groom arrive, and leave when they must. Winnie and her husband visited each table dressed in hanboks and bowed to their guests. This concluded the event. It’s a wham-bam-thank-you-ma’am event, but Koreans are very busy people. 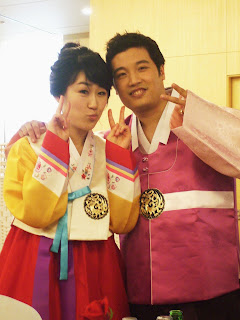 The newlyweds dressed in their hanboks at the banquet. 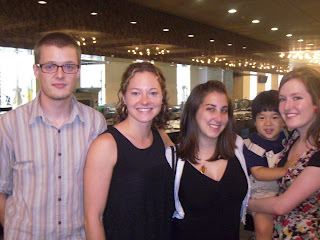 Like I said… it was very different than any wedding I’ve ever been to, but it was very nice. I’m hoping that during my future months I will be lucky enough to have the Korean wedding experience again.

The groom and his friends perform for the bride. (I apologize for the head that continuously pops up in the film.)
2
Previous Post
Next Post