Twice a week, my school holds a graduation ceremony to celebrate the students’ completion of the 3 or 5 day program and to celebrate their hard “work” and “studying” efforts. Sitting through numerous graduations proves to be monotonous after a while, as the dialogue is always the same. “Congratulations” by Cliff Richard is played on loop as the Excellent Student award is presented to the best English speaking kid oneach team (and as I am tortured by this extremely cheesy song.) The headache gets worse as a slideshow of pictures plays and hundreds of children scream whenever they see an image of him/herself, a friend, or a close-up shot of classmates shoving spoonfuls of the mystery lunch meat into their mouths.

Just as I regret not taking a Tylenol prophylacticly, I remember what comes next. The dance competition that follows makes the throbbing headache bearable- takes it away, even. The kids are invited to the stage to dance off to popular Korean songs, usually one from a girlband and the other a boyband. Each time I witness ten year old girls performing the borderline racy choreographed moves, or the boys’ serious faces as they risk losing their dignity, I cannot help to think back to my teeny-booper days of highschool-er, junior highschool. But surely I’m not the only one. Everyone knew the Britney Spears’s “Baby One More Time” dance, right??Unfortunately, America has seen the phenomenon of bubblegum pop fade over time.

K-pop, or Korean popular music, unlike its American counterpart continues to dominate the music scene here. While there are similarities to the USA’s genre, Korea takes it to the extreme. Boybands and girlbands are the top-sellers here and their songs are played from the streets to the grocery stores to the post office. Big Bang is hands down the most popular ensemble and is currently trying to break through to the American audience. Considering their English is close to flawless, and their music is heavily influenced by hip-hop, I think they will be successful in doing so. About 80% of my conversations with my students involve Big Bang; every girl wants to date G-Dragon (the frontman) and every boy wants to be him.

The Wonder Girls, though starting to lose their popularity, are the female equivalent to Big Bang. Their hit song “Nobody” is one of the catchiest, and I found myself singing singing along to it only two weeks after being in Korea. I even know the dance, as sad as I am to admit it, but my kids think I’m cool, so whatev. 🙂 Check the video out here… it’s my favorite.

Speaking of extreme, the second most popular boyband, Super Junior, is composed of 13 members, making them the largest boyband in the world. I’m not even making this up. Their song “Sorry” is undoubtedly a favorite of my male Korean students. Girl Generation, a nine member girl group, made it big with “Gee”. This is also an extremely catchy song with a fun dance, but the translation makes me laugh a bit. It’s a song about a girl who first falls in love and how “her cute heart reacts to it.” “Gee” is a Korean expression similar to “Ohmigod!” but literally means “Jesus!” Like other K-pop songs, they have different music videos for the same song, with some versions making it easier for the viewers to learn the dance.
Various markets and products have seen the impact of these bands on Koreans, and have thus used musicians such as Big Bang to advertise their products. Hite Beer jumped on this train, and there are even pictures of the boys on beer cans. I feel that if a posing N*SYNC had ever graced the label of a Budweiser bottle, any self-respecting man would have switched to Coors, but it works here. 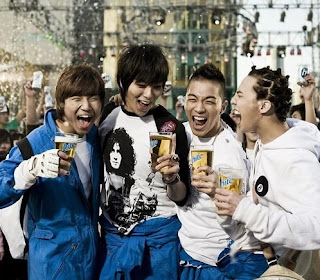 The opening line of the commercial’s song is “Everybody get drunk and party…” Keep in mind, most of these guys are barely of the legal drinking age. Oh, Korea and their love for drunkeness.
A phone company even released a new cell phone called “Lollipop” after the title hit song by Big Bang and 2NE1. They must have known what they were doing, because they have sold like hotcakes. I’m even seeing posters around Dongdaemun, Seoul’s premier shopping area, advertising summer fashion styles closely resembling those of the “Lollipop” video. I have even fallen victim to the every-other-fingernail-is-a-different-color trend. What? It’s cute. And very Korean. 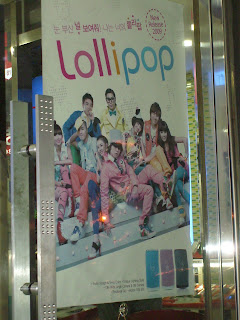 These posters of Big Bang and 2NE1 cover every window of cell phone stores, which are everywhere.

The impact of K-pop on Korean culture and way of life is undeniable. It certainly shows no signs of fading away anytime soon… or leaving my iPod playlist, for that matter.

To experience K-Pop for yourself, click the links in the above post for music videos of the mentioned songs.