By Mimsie Ladner on Monday, July 6, 2009
How does an American celebrate Independence Day in Korea? By eating food and lighting things on fire, of course. What else?
After having to cancel our scheduled cook out (mostly because Itaewon left us all in conditions not able to do anything useful with ourselves), we decided to venture out to Apgujeong for much sought over hamburgers. Koreans know all too well that the meal is an American icon. I had students in my culture class write Happy 4th of July cards to the American teachers, using icons, and every one of them had a hamburger on the cover. So much for lady liberty and purple mountain majesty. Now, we’re just land of the McDonald’s.
After the hour long bus ride, we managed to find our way through the streets to Smokey Saloon, a cute little joint that is highly underrated amongst foodies’ blogs. There are so many interesting combinations of burgers including: “The Ambulance”, “The Pavarotti”, and “The Big Islander”. There’s definitely something for everyone. Having gone once before, I knew that I wanted to try the “Kiss Me Later” burger. 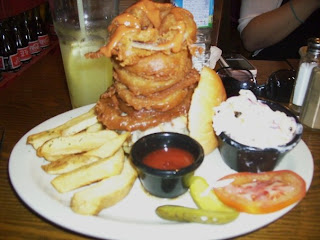 The “Kiss Me Later” burger from Smokey Saloon gives my hometown’s Mugshots a run for their money.

Though I had seen it before, I became wide-eyed as the waitress made her way to our table, plated burgers on hand. My stomach turned in knots as I caught a whiff of the delictableness that lay in front of me: a beef patty smothered with garlic chips and pepper jack cheese, piled high with sweet breaded onion rings, and topped with an amazingly tasty “kiss me later” sauce. I washed down the fries, burgers, and coleslaw with a genuine Country Time lemonade (which set me back $4 by the way, but what’s the 4th without lemonade?), and immediately felt the red, white, and blue running through my veins. Thankfully, I had Pepto and Tums on hand by the end of the night.

Stuffed, we managed to find our way to a nearby park on the Han River. The sight of the city’s skyline set on the sparkling river was absolutely beautiful. Bridges lit up in changing colors. Koreans lined the lawn, sipping wine and soju and chatting delightfully. Families played soccer nearby. Then, we saw the children with sparklers in hand and became excited to learn that we could purchase our very own fireworks at the on-site 7 Eleven. 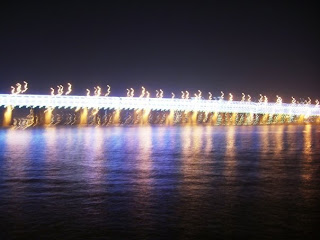 The Han River at night is absolutely gorgeous! 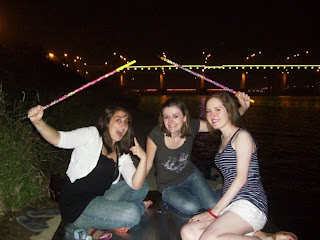 Posing with the Roman Candles. 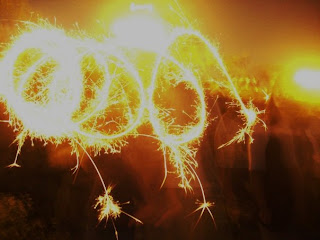 The sparklers on firework function.

I felt the kid inside of me come out as we played with the Roman Candles and traced our names with the sparklers. I felt like I had years before, celebrating the 4th with friends and family on the beaches of Bay St. Louis. The only thing that was missing were the mosquitoes and the blanketing humidity.

Who knew such feelings of patriotism could exist halfway around the world, even for an ex-patriot?

Six Things You Need for a Korean Picnic