By Mimsie Ladner on Wednesday, July 8, 2009
Lonely Planet: Korea gives short summaries of the palaces of Seoul and notes that it is quite unnecessary to see more than one. Similarly, many bloggers note that if you’ve seen one palace, you’ve seen them all. Despite the similarities, I, on the other hand, completely disagree with the aforementioned notions. In fact, visiting the palaces has been one of my favorite leisure activities thus far.
I visited Changgyeonggung (“gung” meaning “palace” in Korean, FYI) on a sunny afternoon in May. I did not know what to expect, as it was the first palace I was visiting, but I soon found myself wandering the grounds for a good three and a half hours, hypnotized by the colors of the gates, halls, and living quarters and the beauty of the palace layout. Although I was upset that there were no tours available, the pamphlet I received contained a map and a good history and description of each building. I was surprised to find that I was allowed to walk around inside the living quarters of the previous queens. As far as I know, this may be the only palace that offers such an opportunity. There was even a beautiful glass building, housing various Asian flowers and plants. Landmarks of the nearby area included an archery pavilion, a 7-story stone pagoda, and King Seongjong’s placenta chamber monument. Yes, you read that correctly: a placenta chamber monument.
The Chundangji pond was the most beautiful area of the grounds and I regretted not bringing a picnic lunch along, as so many Koreans had. Admission to Jongmyo shrine was also included. I found that the shrine wasn’t much to look at, but it’s history was interesting, as many important rituals took place at the site. By the end of my hours spent there, I was happy that I had roamed alone to get a more unique palace experience. 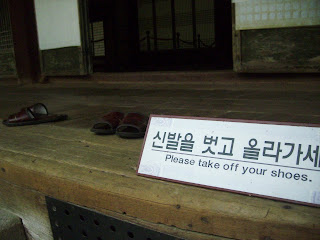 As with all places of importance in Korea, one must remove his or her shoes first. Why? Cleanliness is godliness, of course. 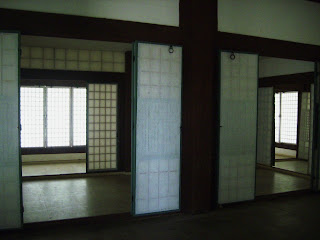 Inside the queen’s living quarters in Changgyeonggung. 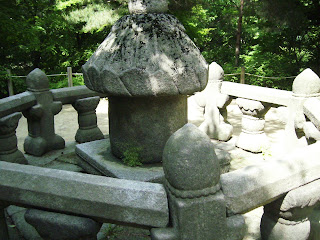 The famous monument in which King Seongjong’s (inventor of the Korean alphabet) placenta was stored for months after he was born at the palace.

Changdeokgung is one of the more famous palaces of Seoul; it was even added on the Unesco World Cultural Heritage list in 1997 for its historical significance and its undeniable beauty. One can only gain access to the palace by a tour, except on Thursdays, when you must pay 15,000 won ($15). The tour, though fast paced, provided an interesting outlook on palace life during the days of the Joseon dynasty. Only a very small percentage of the well known “Secret Garden” is available for viewing by the public. The part that I saw was beautiful and tranquil, no doubt a favorite resting area of the former royalty. We were told by our hanbok-wearing guide that the most exquisite areas were behind the walls, only accessible to “special people”. Thanks for the tease, woman. Next time, I’ll be visiting on a Thursday. 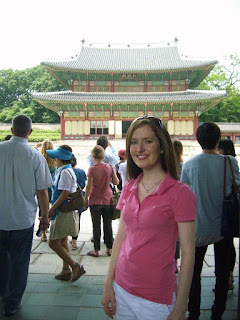 Me in front of Injeongjeon, the main throne hall of Changdeokgung. 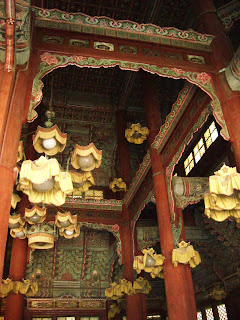 Chandeliers hang from the ceiling of the main throne hall. 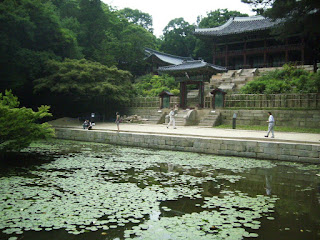 A view of one area of the Secret Garden.

Last weekend, on a whim, I stopped by Deoksugung in the City Hall area of Seoul. I made it just in time to witness the Changing of the Guard Ceremony reenactment, which proved to be entertaining, at least. Men with obviously fake samurai-ish facial hair proceeded past Dunkin Donuts to the palace gate carrying brightly colored banners and beating rhythmically on drums. The commentary was in Korean, but the process was pretty self-explanatory. Afterwards, I entered and stopped by the cafe to rehydrate. I ordered a cup of Sujunggwa (a.k.a. persimmon punch) and enjoyed the always refreshing Korean drink on the rear patio overlooking a sparkling pond, shaded by hanging trees. Deoksugung was very different than the previously visited palaces in that in addition to the traditional Korean-style buildings, the grounds contained Western palace buildings. The Western style architecture was an attempt by officials of the late 1800s to advertise their persistence and desire to modernize the city of Seoul. Today, there is a museum of contemporary art on the grounds. I will return when the Andy Warhol exhibit premiers in December (woo hoo!). 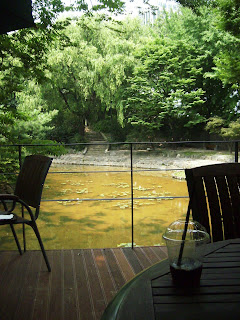 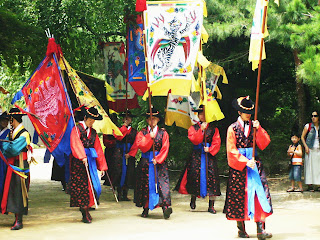 Changing of the Guard ceremony at Deoksugung. 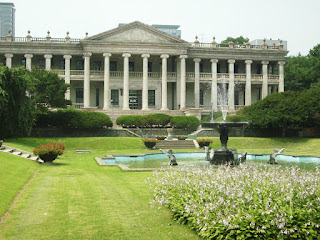 Though I am not completely knowledgeable about Korea’s past, visiting the palaces is a fantastic way to experience the rich history of its former rulers and the mostly humble lifestyles of royalty. Walking down the paths through the tranquil gardens or stepping into the once bedrooms of its most valued members of society can almost make you feel like you were there. (With the exception of the obviously present skyscrapers and honking cars in the surrounding boundaries.) The best part, however, is that each palace does in fact offer something different to sightseers. Koreans are well aware of this, as well, as they almost always outnumber foreign visitors. I still have a few more palaces to visit, and will undoubtedly re-visit the others. Even if one takes no interest in culture or history, a palace visit on a nice day will certainly be time well spent.