By Mimsie Ladner on Saturday, August 15, 2009
I consider myself to be an adventurous soul, always seeking a cheap thrill. So, when Sarah and Melissa agreed to join me on a trip to Lotte World, I knew it would be a memorable day in Korea.
We hopped on the subway in the morning after grabbing some McDonald’s breakfast and headed toward Jamsil. We were taken back by how dominated the stretch of highway was by Lotte; it seems that the area must be the official headquarters of the Lotte Company. (Melissa: have you wikipediaed if there is in fact an heir that one or all of us can chase after?) The buildings that seem to extend into the clouds are a combination of department stores, hotels, and entertainment venues including an ice skating rink and Korean folk museum all owned by the conglomerate. We continued to walk and I felt an urge of excitement as we entered the biggest indoor amusement park in the world.
The ceiling of the interior was a huge stretch of glass that covered the entirety of the room, allowing for natural light to permeate, but not interrupt the comfort of constant air conditioning. Intricately designed mechanical hot air balloons moved overhead, lights flashed all around us, the scent of cotton candy filled the air, and the sound of delightful screaming sounded nearby. It all felt so familiar, yet magical, and we were in such a trance that we didn’t know where to begin. 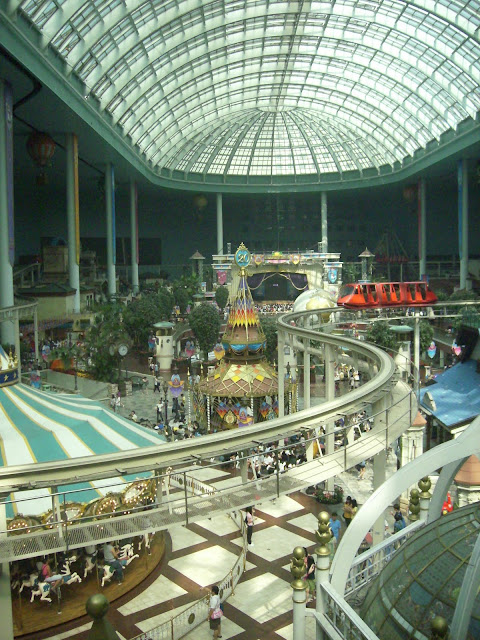 A view of the interior of Lotte World.
We went to the nearest attraction first. Desparados was an interactive attraction in which we mounted mechanical horses and positioned ourselves with guns ready. A cowboy like character appeared on the screen in front of us and though he spoke Korean, it was easy to understand the objective: shoot ’em up. We gained points for the number of targets hit and Melissa even won 3rd place. Next, we moved on to The Adventures of Sindbad (yes, Sindbad) and The Pharaoh’s Revenge.

While it would be wrong to compare Lotte World to Disney World, the similarities were undeniable. With it’s mechanical human-like robots and sudden drops in darkness on a water track, Sindbad was a replica of Pirates of the Carribean, add sultans and genies. The vehicle that we rode in on Pharaoh was identical to that of Disney’s Dinosaur, and the effects were of the same caliber. As we rode through a cave and saw spiders covering the walls, we suddenly felt them moving at our feet, the same way one might experience a 4D movie. It was quite unexpected and extremely funny. It was a shame that the snap-shot cameras did not capture our faces at this point in the ride. 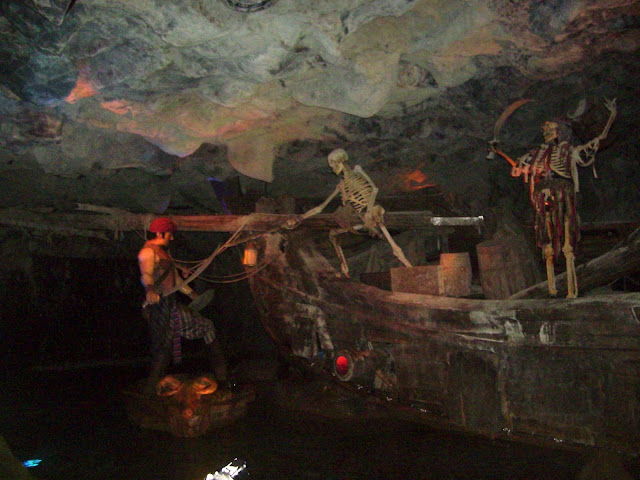 On the Sindbad ride… seeming extremely familar at this point. 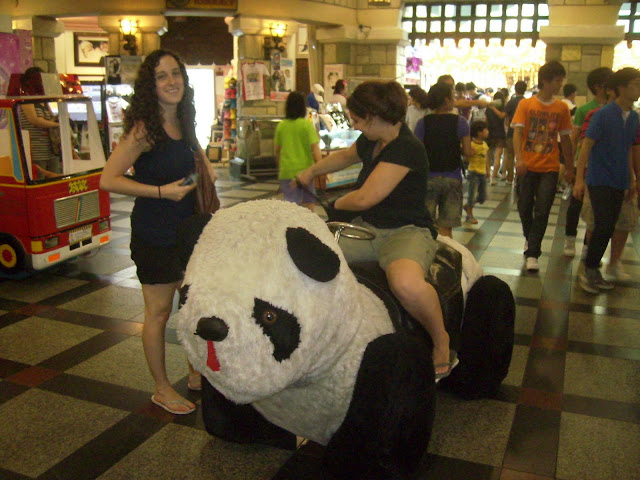 Bali, bali, mechanically operated panda! Melissa riding alongside a two year old certainly turned some heads.
I was happy to learn that concessions were not outrageously priced like they are in American parks, but rather quite cheap. I contemplated the peanut buttered roasted squid, but figured it wouldn’t settle well after a few coasters, so I settled for a hotdog (mustard, relish, and onions- just the way I like it.)
There were tons of shows and character parades going on throughout the day, including a Brazilian mamba dance performance complete with South Americans dressed the part. We had our minds focused on the rides, though, and continued to Magic Island, the outdoor section of the park, settled on a beautiful lake. We were sadly unable to locate how to board the monorail which links the two sectors. Soon, the Lotte Castle came into view, complete with a Cinderellaesque design. 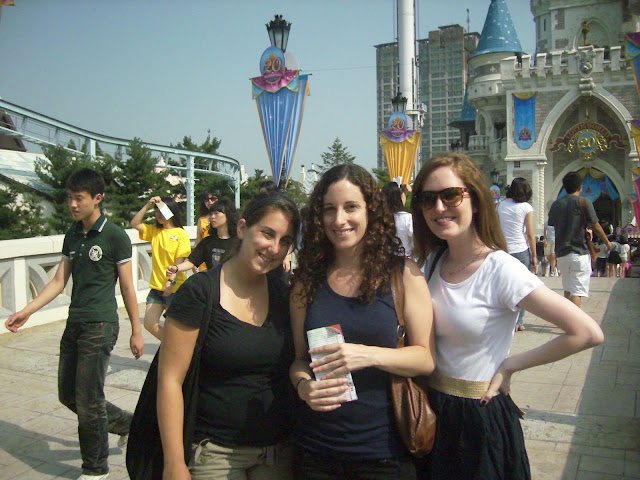 The girls and I in front of Lotte World Castle
We got in the hour long line for the Atlantis Adventure, a high speed coaster that begins in a really gorgeous building adjacent to the lake. It had a “0 to 60 in 3 seconds” like start and only became more exciting with every twist and turn. Feeling adrenaline ignite in one’s veins is so exhilarating and Atlantis had my flight or fight chemicals going crazy long after the ride was over. There is a height requirement, however, because a tall foreigner was said to be decapitated a few years back. Not sure if that’s true or not… but still, this is a must-ride attraction and was certainly the highlight of our day. 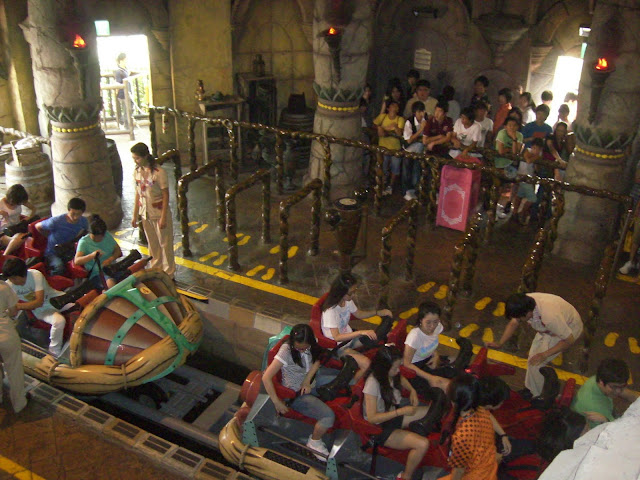 Passengers boarding Atlantis Adventure
After snapping some pictures of the almost eerie “royal” characters, chowing down on fruit drinks and churros, and having some laughs over the many Koreans (guys included) wearing oversized sparkly bows and rabbit ear headbands, it was time for us to use our Magic Passes (the Lotte equivalent to the Fast Pass) for the Flume Coaster. We jumped in the log flume and were taken up and down tracks that had us close to being covered with water… sound familiar? 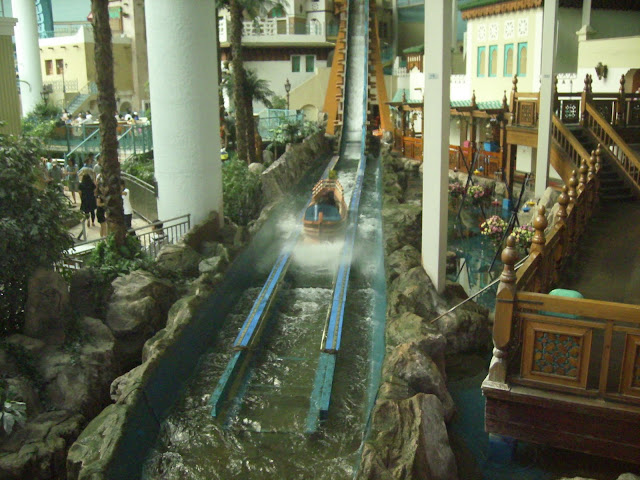 I fortunately managed to keep my hair dry 🙂 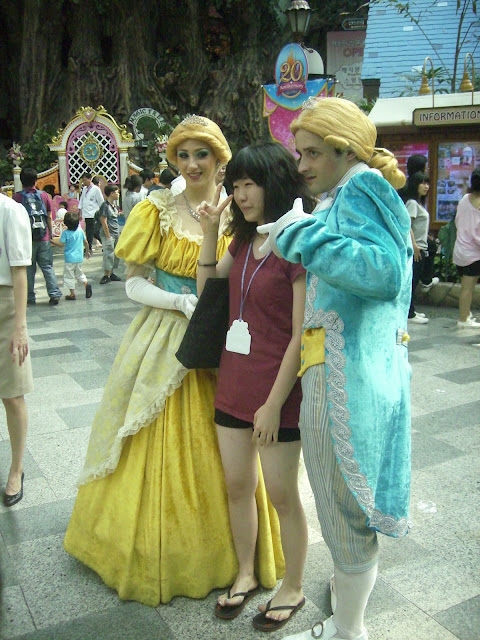 Since when has Prince Charming been ganster… or looked so creepy?

The lines, too, were like Disney: long. We were only able to cover about half of the park in the entire day. Kids are still on summer vacation, so we figured that may have had something to do with the extended wait times. Nevertheless, it was a fantastic day. I’ve decided to purchase the annual pass, as I know I will be back here again and again, if only to try the Gyro Drop and the twisting swing thing that promises to make you lose your lunch. What else is a better indication of a successful day at an amusement park?

*Note: This post was written in 2009.  Some of the rides may have since changed but the following information is accurate as of August 2013.

To get there:  Take the Seoul subway to Jamsil Station (Lines 2&8, Exit 4).  Follow the signs leading to Lotte World, which is attached to the station.