By Mimsie Ladner on Thursday, August 27, 2009
After having lived in a country of open spaces and big houses, it’s difficult to fathom how one might live in a crammed, upward built nation. Once a small town girl like myself has witnessed Seoul, it becomes more apparent, but the sight is quite overwhelming.

Due to the lack of living space in Korea, Seoul has been forced to expand outward to accommodate an increasing population (16,700 people are living per square kilometer). There are even cities and communities on the outskirts of the city which have been built solely for the purpose of accommodating these people. Though Seoul is growing in all directions, the most noticeable growth is skyward. Riding on the subways south of the Han River or to the east of the city, there are areas in which the train moves on exterior tracks, allowing passengers to have great views of the passing neighborhoods.

While at nighttime, the neon facades of multi-level department stores and the glowing red crosses of churches are visible as far as the distant horizon, the most noticeable landmarks during the day are the gigantic apartment complexes spread throughout the city. The majority of citizens live in very modest apartments, extremely close to neighbors. While such an environment may be a catalyst of crime in the States, its solely a source of community here in Korea. They may seem like an eyesore, but most Koreans I’ve talked to consider these modern apartments to be the best housing option in the city. 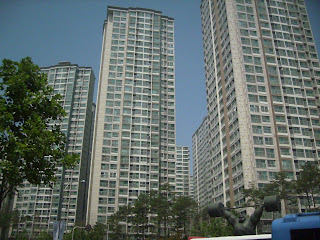 Apartment complexes, like this one in Jamsil near Lotte World, are built ridiculously high in Korea, as there is no threat of earthquakes.

On the contrast, there are still a few hanoks, traditional Korean houses, dotted throughout the country. These beautifully designed houses are built in an “L”, “I”, or square shape, depending on the region in which they are built. These different shapes allow wind to be circulated or blocked. The ondol flooring, warmed by heated stones, kept these traditional homes warm in the winter. A daecheong, or front porch, and shutter-like windows that opened the house kept residents cool in the scorching heat of summer. Hanoks with straw roofs belonged to commoners while the royalty owned beautifully tiled-roofed hanoks.
One of my favorite tourist destinations to visit in Seoul is the Namsangol Hanok Village, located on the site of a Joseon-era (Korean royalty) summer resort. The landscaping, especially the traditional Korean garden and pond, is absolutely breathtaking and I have easily spent entire days wandering around here. The preserved hanoks have been furnished to appear as they did during the Joseon period. Some of these rooms include drawing rooms, kitchens, and bedrooms. In addition to admiring these beautiful homes, one can play traditional Korean games and watch reenactments, like a wedding ceremony, take place on the grounds. I even had my picture taken in a hanbok in one of the hanoks here. Yes, I know. I am a dork. But, I am perfectly okay with that. 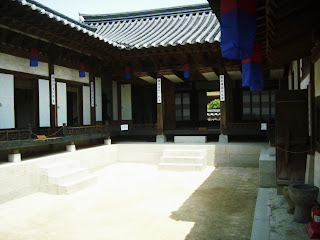 One of the square shaped hanoks, predominant in the northern region, built to block cold winter winds. 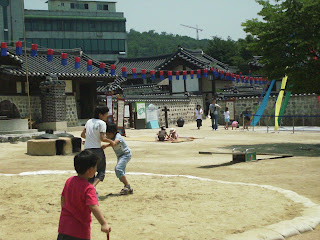 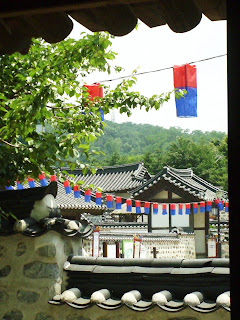 Hanoks at the Hanok Village.

While Seoul is far too large for hanoks to be the first choice for residents looking for living quarters today, modernized apartments seem to be just as accommodating. Koreans place high emphasis on friendship, and such a community is formed and fostered in these complexes. In fact, there was a recent article about a group of Koreans who immigrated to New Zealand. Not before long, they returned to the apartment complexes of Seoul, stating that living in New Zealand was too peaceful, and thus, too monotonus. Maybe it’s true after all: there’s no place like home, wherever in the world home may be.