By Mimsie Ladner on Saturday, January 1, 2011
It’s holiday time across the world and people everywhere are celebrating. Including Korea. It’s my second holiday season in Seoul and I’m once again finding ways to incorporate traditions which I’ve grown up with into the practices and customs here. I’m not alone, either. In fact, the expat group here in Seoul is quite tight-knit and each year, some motivated individuals make the effort to ensure that all foreigners and locals alike can celebrate Christmastime as it should be celebrated.

One of the most well-known events amongst us waegookens (foreigners) is SantaCon, an event held in big cities across the world in which participants dress up as ole Saint Nick and spread the Christmas joy throughout the streets. This is done by singing Christmas carols, distributing candy to children, and sharing a hearty “Ho, ho, ho” with fellow Santas while parading through the streets, confusing the hell out of those not in the know. I feel that SantaCon is considered particularly unusual in Confucian Korea, but there’s no doubt that bystanders get a kick out of seeing a sea of red float down the streets of Sinchon/Hongdae, neighborhoods most known for their kick ass nightlife, in which the event is held.

A favorite memory from SantaCon was getting stuck in the automatic doors of the subway last year trying to catch the train with Aaron, my SantaCon BFF. Donned in full-on Santa gear, we got some surprising looks from the crotchety old ajusshis. While I didn’t get to celebrate SantaCon this year from the beginning of the event due to my being at a school dinner, I was lucky enough to catch a glimpse of the giant Red Rover game held in the crosswalks and signaled by the streetlights. There was also a headphone concert in the Hongdae park which was pretty entertaining, as well. As the large group of Santas separated as the night progressed, alcohol consumption increased, so you can imagine the sight of hundreds of staggering Santas; yet, all were merry as Santa should be. SantaCon is an event that should not be missed by any foreigner (or for any local wanting to let out their inner-Santa) living in Seoul during Christmas. 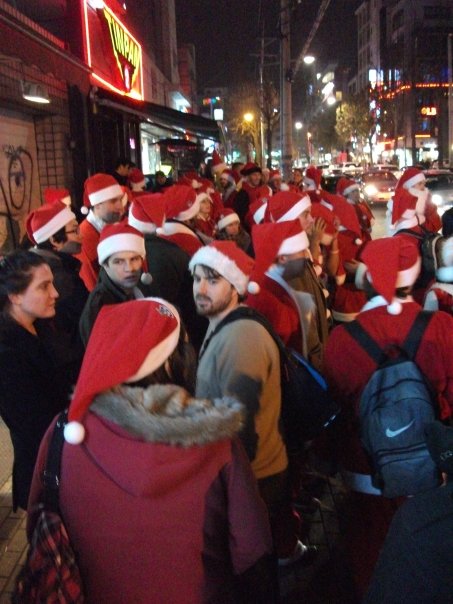 Santas gather outside Tinpan during SantaCon 2009.
And, if you were wondering, Santa does visit Seoul. I believe it’s a more recent tradition, but kids are fully aware that they better watch out cause You-Know-Who is coming to town. I totally took advantage of this awareness the entire month of December to correct the behavioral issues of my naughtier students. They were not so knowledgable, however, about the logisitcs of Santa: where he lives, how his elves help out, and the flying reindeer that take him from one house… or apartment building… to the next. I had a field day telling them all about Santa, though I of course had to improvise here and there, seeing as there aren’t chimneys in Seoul and whatnot. I was also happy to learn that Santa brings each child only ONE present- not the sack-full that Americans get. My students were happy to receive a diary or a basketball, which was refreshing from the selfish mindset that Western kids usually approach Christmas with. 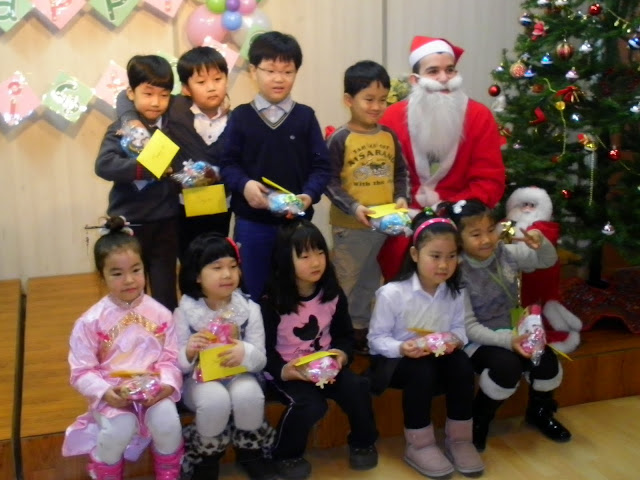 My students were visited by Santa. One student explained that he knew it wasn’t the real Santa. How did he know? The chest hair was the same as their former teacher, Roderick.

One should also know that Christmas in Korea doesn’t even really have the same significance as it does in the West. It’s primarily a couple holiday rather than a time spent with family. There are special couple sets at various places like ice skating rinks and amusement parks for Christmastime, because let’s face it, what would Korea be without couple sets? Still, the holiday is not nearly as commercialized as it is in the West, which is a nice change. You won’t really find Christmas sales and the like, but the city center is transformed into a Winter Wonderland, complete with tasteful decorations and lots and lots of lights. Admiring the beauty is a great way to spend an evening, if you can tolerate the freezing cold weather and ice-slicked streets. 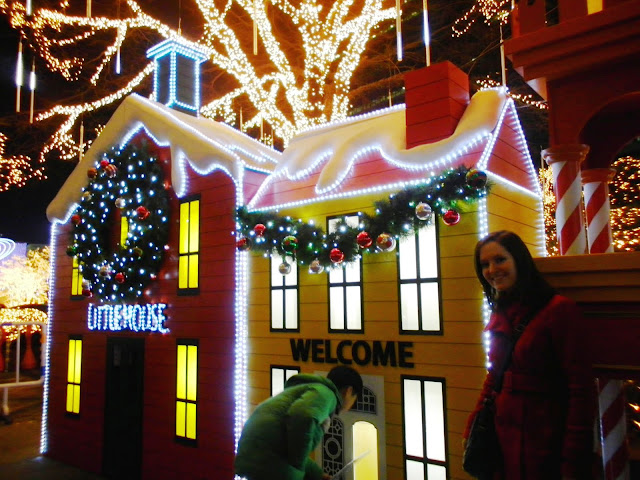 Me in front of “Little House” decorations near Lotte Hotel in downtown Seoul. 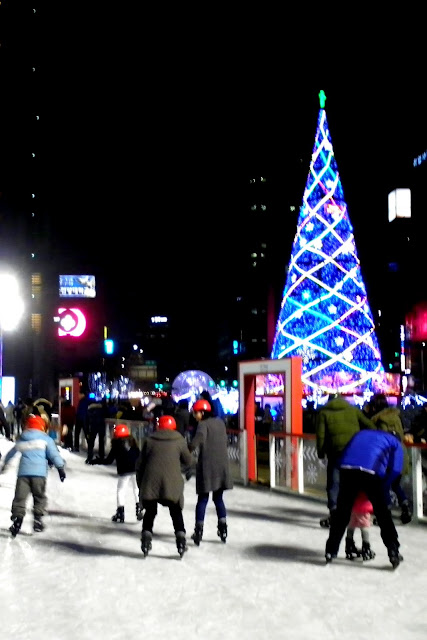 I spent Christmas morning going to church at the Myeongdong Cathedral with a co-worker. It was the first time I had been to church in a while, so it was nice to have that tradition from home to make it feel more Christmasy. We also took some nice pictures of the big nativity scene outside, complete with kimchi pots lined up next to Jesus’s manger. Who would have known Jesus was a kimchi eater? Not me!

That evening, I took my manfriend out for his first traditional American Christmas dinner at Chef Meili’s in Itaewon. We were treated to a four course dinner of salad, beet soup with horseradish, turkey, stuffing, vegetables, and pumpkin pie. I knew it would be good, since I had gone the year before for Thanksgiving, and once again, I was pleased by the Austrian owner’s culinary skills. I’ve never eaten from the regular menu, but I’d highly recommend the holiday dinners for all of you Seoulites out there. Dinner was a real treat and a great way to end Christmas. 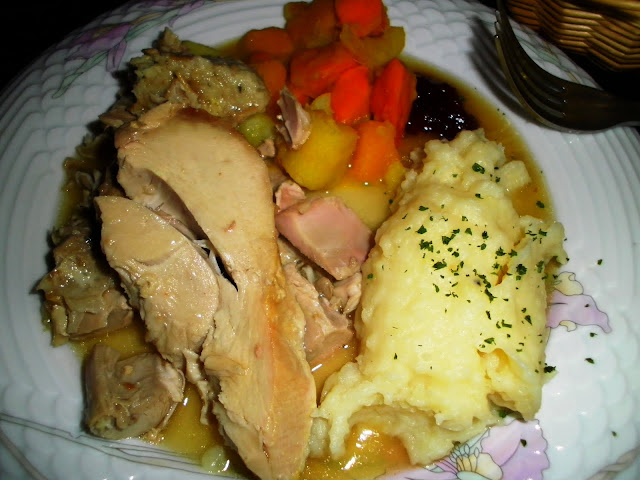 The main course of Chef Meili’s holiday dinner: turkey and all the trimmings.

New Year’s was just as pleasant. Though I often celebrate NYE by getting intoxicated in a bar with friends and making up memorable songs (don’t ask… it just happens), I took it down a notch this year and shared the evening with Emily and Saemi, two Korean friends who I’ve really come to know and love. Emily’s mom made me a homemade Korean dinner and afterward, we counted down to 2011 at Saemi’s with her parents. We watched the annual ringing of the Boshingak bell in Jongro on television and were happy we were nice and warm inside rather than being a part of the 80,000 that parked it outside in the cold. After gambe (“cheers”) and champagne, the three of us stayed up until the early morning chatting about life and love and all the good and bad that comes with it. 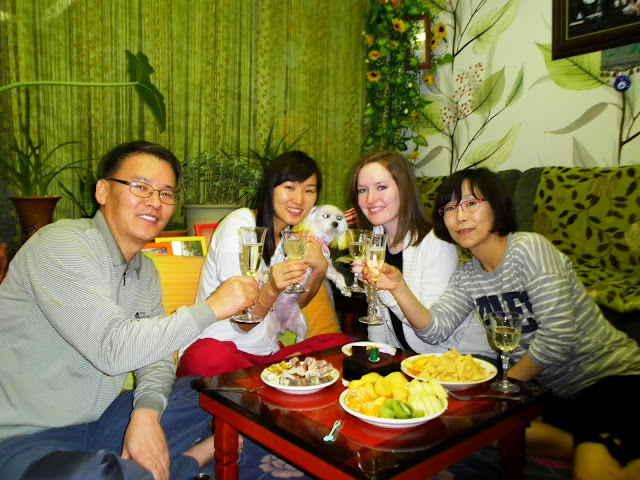 Saemi, her family, me, and Arong, her fashionable pup enjoying champagne as the clock striked 12.

We woke up to dine on ddeokguk (rice cake soup), the Korean equivalent to America’s black eyed peas, an essential food for New Year’s Day. Koreans all turn one year older on New Year’s Day and it is said that this actually happens when you finish your bowl of ddeokguk. We all had two bowls, so I guess we each aged 2 years. Gosh, I really can’t keep track of my age anymore in this country. Despite my dislike for now being 26 (rather than my real age of 24), the food was delicious and the company comforting. It’s nice to know that so far away from home I have friends to confide in and share my holidays with.

Though it would’ve been ideal for me to spend the holidays at home, it was still a special time for me in a place that has become a second home with a second family. From putting on the famous red suit, to laughing at clumsy folks falling down at the ice rink, to searching endlessly through black markets for eggnog, to slurping down rice cake soup as 2011 rolled in, I’ve enjoyed practicing my own holiday traditions as well as gaining insight to some new ones. I can only hope that with the new year, I’ll continue to gain more experiences and cherished memories such as these.