Global warming and climate change are issues that we hear about everyday. It seems that we are constantly bombarded with suggestions on how to change our lifestyles so that we can help the environment by decreasing our carbon footprint. Al Gore has no doubt instilled fear into all of our minds, what with predictions of flooding coastal cities and melting glaciers. Despite our anxieties about the future, how many of us have actually made a change in our daily lives to do our part to make a difference?

Last month, in an effort to cut down on energy consumption (and electricity costs), Korea’s president, Lee Myung Bak demanded that all government buildings (and encouraged the nation’s citizens) to keep the temperature at 18 degrees Celsius. He also called for a limit in the use of personal electric heaters and also to switch heaters off from 11 a.m. to midday, and then again from 5 p.m. until 6 p.m. I found it surprising that residents, in general, did in fact follow the requests. Had this been a mandate announced on prime time news by Obama himself, I feel that it would have gone in one ear and out the other of American viewers. Yet, Koreans seem to be much more responsible in regard to the environment than their Western counterparts.

I remember when I first arrived in Seoul, I spent a lot of time in fast food restaurants and run-of-the-mill cafes like Starbucks, as their menus were in English and the food was familiar. Yet, when it came time to dump my trash and head out, familiarity was out the window. This confusion arose mostly because the garbage receptacles are arranged so that every item on one’s tray has a proper place to go so that it may be recycled accordingly. In other words, liquids are to be emptied from cups before the paper cup is put in one bin and the the plastic lid and straw into another. There’s also a bin for food waste and one for paper products. Also, in most places, if you are dining in in you will receive a plastic cup or ceramic mug (in cafes), so that it may be washed and reused once you are finished. It’s all quite efficient and no doubt ensures that recycling is carried out effectively. 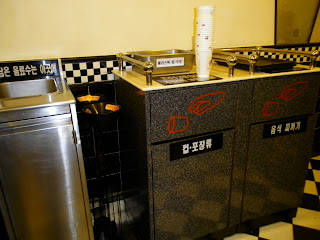 Trash cans at Burger King have a place for everything: food waste, liquids, cups, plastic, and paper products.

These recycling habits aren’t limited to restaurants. In fact, there are strict regulations about what is to be separated in one’s home. There are even special garbage bags for food waste that one must buy from the grocery stores that are specific to his or her district to store food scraps in. Recyclables are to be put in clear bags, also separate from general waste. I must confess that it has taken me a while to catch on to these rules, especially since my apartment does not permit room for multiple garbage cans, but I’m getting better with each day. While I may be the somewhat ignorant foreigner, I really respect that the Koreans are habitual about separating their garbage. I found a fact that in 2003, nearly three-quarters of all waste was recycled; I have no doubt that that percentage has only gone up since then.

One habit that I have been very good about is bringing along my own bag when I make grocery shopping trips. If one doesn’t have a bag for bought items, he or she must pay for a plastic bag. While the fee is small (maybe the equivalent of 10 cents or so), I’ve noticed that most shoppers carry out their buys in a reusable bag. This, no doubt, helps out the environment a lot. I had been wondering what Americans would do if Wal-Mart suddenly started charging for plastic bags, so I Googled the subject and found that some California branches had initiated a plastic bag ban as a test to see how its patrons would respond. There was the expected negativity but after a while, shoppers generally began to respond positively. Hopefully other states will follow, as it’s a small but easy way to better our recycling habits.

The Korean government continues to make strong efforts to make its country as green as it can be. In addition to recycling and reduced energy mandates, new buildings are eco-friendly and there are big plans to utilize solar and wind energy. In fact, 2% of Korea’s national GDP is budgeted to go toward the green sector over the next 5 years. There’s no doubt that this nation is a great role model for others looking to decrease their carbon footprint.

It does seem, however, that the younger generation (teenagers and under) are less motivated about going green than their elders. I’ve seen many youngsters tossing candy wrappers on the ground or being careless with garbage separation. Now, if only Korea could find a way to encourage these kids to follow the older generations, they would really have no worries about their future. My suggestion? Plant subliminal “Go Green” and environmentalist messages into the oh-so-popular Starcraft games. Problem solved.