I don’t consider myself a high maintenance kind of girl when it comes to most things, but if there is one thing that makes me cringe, it is the seemingly medieval plumbing fixture known to the Westerner as the squatty potty.

These waste receptacles are not unique to Korea and can be found all over Asia and probably the world. I have particularly bad memories having to use them in India- the smells were almost un-human. But for your sake, I won’t elaborate on that. Anyway, spend enough time in Korea and you will have to use one eventually. I’ve had to use them on many occasions, quite unhappily I may add, but I have yet to adjust to them, mostly because I don’t understand why they still exist. Of course I get why they are still used in undeveloped countries, but not a clue as to the reasoning behind their continued use in technologically advanced Korea. 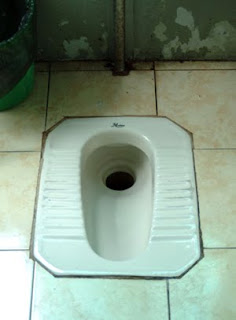 The squatty potty in all its glory.
These ceramic holes in the floor are mostly found in public areas from large office buildings to subway stations. Yet, the strangest thing about larger public restrooms is that there are multiple stalls and not all of them will contain the squat toilets. In fact, there is almost always a sign on the door of the stall indicating whether or not it houses a squatter or a “Western toilet.” These Western toilets are usually equipped with about 100 buttons, each offering its user a different function to be performed while occupying the machine; functions include everything from seat warming for those cold winter days to a bidet wash.

Why? Why, why, WHY do some squatters still exist in some stalls while the next stall’s squatter has been replaced by amenities that even the Jetsons wouldn’t have been able to think up? Maybe there’s some water-saving purpose behind it all… or possibly older generations prefer to squat to take care of their business but I just don’t get it and probably won’t until someone explains it to me. Please, if you know the answer, leave a comment and settle my curiosity!

While I HATE squatty potties, there is one thing I love about Korean bathrooms. Most newer restroom stalls are equipped with etiquette bells. When the button is pushed, a loud flushing noise is sounded through a speaker as to hide any other less polite noises that you wouldn’t want your neighbor to hear. That, my friends, is a landmark in bathroom technology. 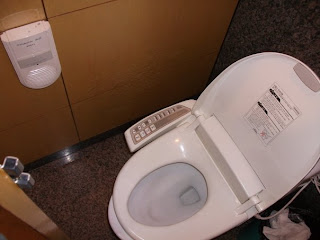 In contrast to the squatter, Western toilets offer an array of options, like a seat warmer, to make your time in the stall enjoyable. Mounted on the wall is the etiquette bell.

Might I add here that I’ve also visited the coolest bathroom I’ve ever seen in my life in Korea. For those of you interested in toilet tourism, be sure not to miss the facilities atop the N Seoul Tower. Not only are the toilet designs award worthy (no squatters here) but the view of the city is breathtaking. 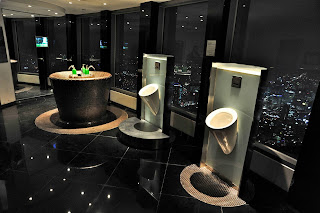 Beatifully designed urinals in the men’s restroom overlook the city of Seoul at the top of N Seoul Tower. (Photo credit: Luther Ladner, my dad)

Don’t get me wrong. Korean bathrooms are usually clean and serve their purpose well enough. (Though I could go on about the bar soap shared by anyone using the sink… talk about a swine flu vector!) But, I guess no matter how long one lives in a country, there are certain aspects which remain a mystery.