I love Seoul. I really do. But I’ve gotten to the point where I’ve started to find myself doing the same things over the past few months. I’ve always been adamant about using my time here in Korea to see all there is to see, but as far as Seoul is concerned, I’m running out of things to do. Now, don’t get me wrong. I’m sure there are plenty of wonderful neighborhoods that I’ve yet to discover, but the adventurous side of me desires something more than the same ol’ scenery. So, recently, I decided to take a day trip out of Seoul to see what the outskirts of the city had to offer.

Incheon. For international travelers, it is the port of arrival in Korea, as it is the home of the “world’s best airport.” For history buffs, it is a city of great importance in the American/UN victory of the Battle of Incheon in the Korean War. For me, I guess it is both of these things, but it is also the landmark I use to determine which direction I need to go when accessing line 1 on the subway. Seeing as it is at the very end of the line, it takes a while to get to, and as I boarded the train one early morning, I hoped I would be able to find the city worth the long trip.

After walking out the station’s only exit, I immediately spotted the large, characteristically Chinese gateway into Korea’s only Chinatown. In the 1940s, many Chinese immigrated to Incheon during a boom in trade of chinaware, medicinal herbs, and silk. While the area became much smaller after the war, it still draws large crowds during the weekends. This neighborhood is what originally drew me to Incheon so I was eager to explore it. I was first greeted by merchants waving me into their shops; their wares included everything from traditional Chinese dresses to Chinese liquor to small marble figurines of happy Budais. Most of it was cheap souvenirsy paraphernalia, but the stores were fun to browse. 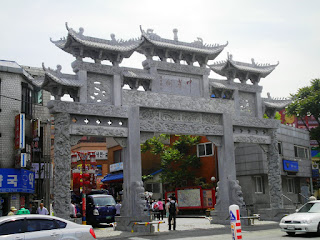 This extravagant gateway to Chinatown can be seen upon exiting Incheon Station.

Unlike many Chinatowns that I’ve been to, this one was especially clean and it was obvious someone had put a lot of effort into the aesthetics of the district. Red lanterns hung from above. Walls were painted with murals of mysterious oriental women holding parasols or vicious dragons keeping watchful eyes on the streets. Further up the hill from the entrance, I even found a cool temple amidst some winding alleys. I’ve never been to China, but I imagine that it would look something like what I was seeing. 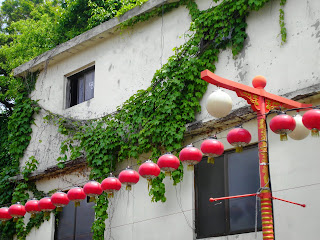 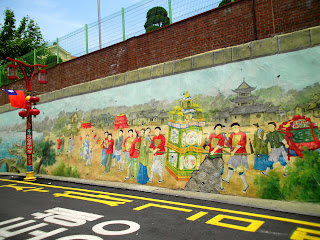 Murals depicting various historical scenes create a vibrant atmosphere in Chinatown.
Chinese restaurants were plentiful and I was eager to find a good one. Many of them serve up jajangmyeon, which is actually a Korean fusion dish of noodles and black bean sauce. I’m not a fan and despite the fact that Incheon was the city in which this beloved dish was created, I decided I would find some authentic dumplings instead. I let my Lonely Planet guide direct me to Wonbo where I had a large portion of pork-filled dumplings for just a few bucks. Koreans are not big on dessert, so I figured it would be the same for the Chinese. I was wrong. I loaded up on traditional Chinese moon cakes filled with various dried fruits and nuts and some other fried, crunchy goodies from street vendors and snack shops as I wandered the streets. 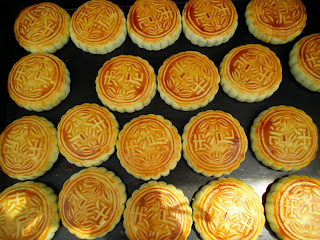 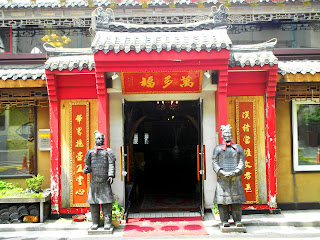 Eventually, the lantern-lined streets came to an end and I found myself entering Jayu Park, or “Freedom” Park. One striking asset to the park is the very modern Centennial Monument, built to commemorate 100 years of friendly relations between Korea and the US. Coincidently, it was Memorial Day and I saw tons of elderly men walking around the area, wearing hats noting their veteran status; I couldn’t help but wonder how many of them were near this spot during the war. I soon found myself at a point overlooking the port of Incheon. Nearby, in a garden filled with colorful flowers, a regal statue of MacArthur also looked out over the port, offering his own protection of this important city. 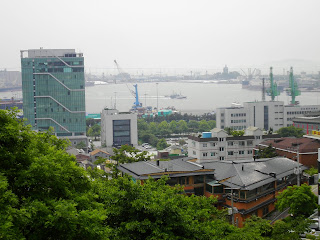 Goods views of the port of Incheon can be seen from Freedom Park.

I headed back to the station to hop on a bus that took me to Wolmido. I could hear them before I could see them. Hundreds of adrenaline-hungry couples, families, and friends screamed as an assortment of carnival rides dipped, swung, and dropped. This permanent carnival was just a few steps away from the boardwalk, which was my destination. I was shocked that I hadn’t heard of this place that so resembled Coney Island. There were all of your typical boardwalk games, offering oversized stuffed animals as prizes and stalls selling cotton candy, sodas, and dried squid (which I’m guessing cannot be found on Coney Island.) There was an amusement park and plenty of entertainment stages, some of which featuring troupes of dancers and singers well past their prime. I found a nice table outside a café and parked it there. While sipping on lemonade, I watched the people pass by happily and the boats drift along in the background. 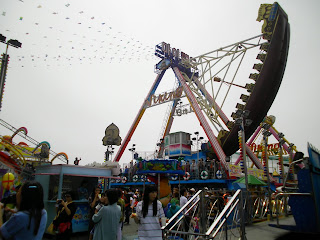 A Viking Ship rocks back and forth at the permanent carnival in Wolmido. 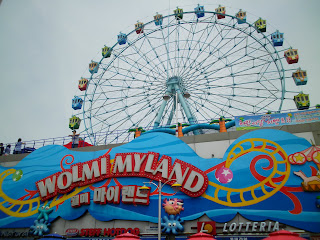 What would a boardwalk be without a giant ferris wheel?

With my quest for finding a new place a successful one, I felt that all I had seen in Incheon was well worth the hour long trip. Korea is often coined “Dynamic Korea” in tourism ads and as I continue to see more of Korea, I can understand why. Incheon is not far from Seoul, but it offers visitors something that can’t be found within the city limits. I headed toward the subway station, ready to get back to familiarity, but not before just one more moon cake. Or two.