By Mimsie Ladner on Thursday, August 11, 2011
Rain, rain, go away. The downpours have been non-stop since the beginning of June and by the end of July, I thought I was going to go crazy if I had to stay indoors any longer. I was eagerly looking forward to my vacation in Jeju-do, Korea’s own subtropical island, but was a bit upset by the weather forecast predicted for the week I’d be there. In fact, as I headed to the airport for my flight, a landslide was about to occur in Seoul just a few hours later. The deadly weather would end up killing over 30 that day, in addition to causing severe damage to one of the ritziest areas of Seoul. So, when I landed at the Jeju airport to be greeted by sunshine and blue skies, I felt a bit guilty. But, this was my vacation and I was determined to enjoy the nice weather. Yes, I deserved it.

I spent five days on the island with my good friend Tira. I usually like traveling alone but she was a great travel buddy and I was really blessed she was there. Jeju itself is actually quite big and while it is accommodating to foreigners, there is a lot of effort involved in getting around if you can’t speak Korean. So, thanks to her, my time there was more of a vacation and less of a headache. We spent a lot of time on the palm-lined beaches, cooling off in the clear, emerald water when it got too hot. We snapped photos with the iconic harubong. We ate well. Really well. Jeju’s famous black pork was almost worth the trip and I also got to try some new dishes, such as cold cactus naengmyeon (noodles) and raw fish bibimbap. We managed to get ourselves up at 4:30AM for a breathtaking sunrise on Seongsan Sunrise Peak. Yet, the highlight of my trip was learning about and getting the opportunity to meet real Korean mermaids- minus the gills and all- known to the locals as haenyeo.

The word haenyeo literally means “sea woman” and this title appropriately defines their lives. These women make a living by making daily diving trips into the sea to gather seaweed, clams, and abalone. Using no special diving equipment, they’re able to hold their breaths for up two minutes while collecting the seafood. Maybe these sea women have gills after all. In the old days, it was common for haenyeo to begin this job at the tender age of 10 and even today, it is generally an occupation that runs in the family. Women worked for 6 or 7 hours a day, not including additional hours spent on the farm. Unlike on the mainland, families in Jeju desired baby girls, as they ensured livelihood. Despite the Confucius values of Korea, women were not only the heads of their families but they also held a special place in society. So much so that they were recognized for leading the anti-Japanese campaign and protecting the haenyo culture during the occupation. 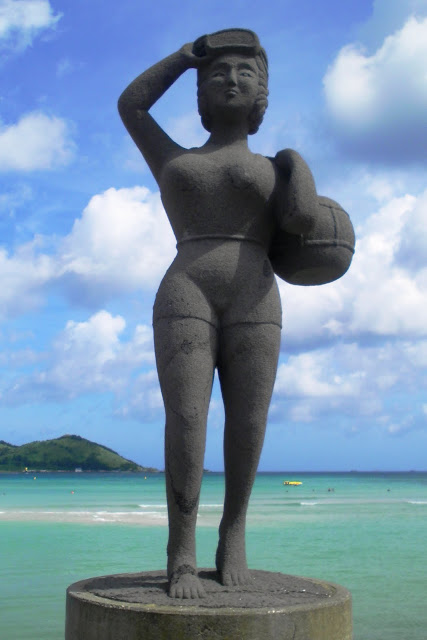 Statues of haenyeo can be found all over Jeju Island. 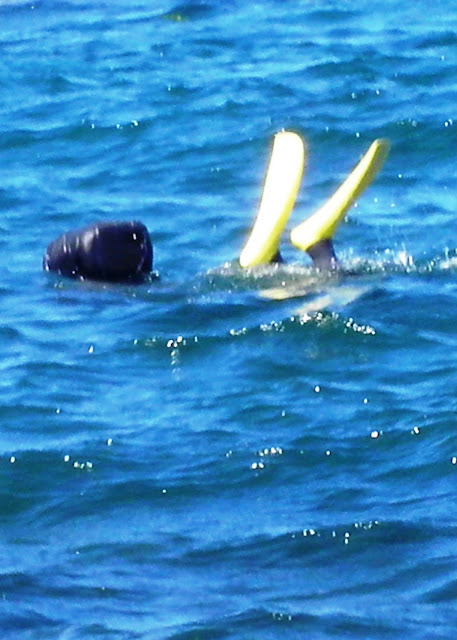 Many haenyeo can be spotted diving just off the coast while walking on the Olle-gil.

During the 1970s, there was a big boom in the seafood export business to Japan. As a result, haenyeo started raking in the big bucks. We learned on our trip that if a man married into a family with at least one haenyeo (even if she was the grandmother), he did not have to work. Seriously. Jeju women were wearing the pants well and were able to provide for their families without financial worries and began to send their daughters to college. Perhaps it was at this point that would-be haenyeo had a taste of the sweet city life and started to focus their career ambitions elsewhere. Whatever the reason, the number of haenyeo has been declining rapidly since then. In the 1960s, there were 30,000 of these women. In 2003, there were less than 6,000. A big portion of the remaining haenyeo are over 60. 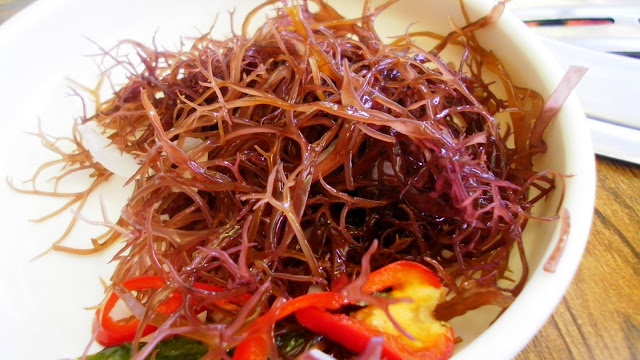 This unique seaweed is one of the wares of Jeju haenyeo. It was often banchon (a side dish) at many of the restaurants where we ate on the island.
Tira and I were waiting for our hop-on-hop-off sightseeing bus on Udo Island when I spotted two halmonis (grandmothers) donned in the signature black wetsuit. I got excited and Tira agreed to come with me to chat with them. Welcoming us with big smiles, they exuded a friendliness that only elderly women can. With Tira translating, I curiously inquired about their age. When they replied that they were in their 80s and had been haenyeo since their early teens, my mouth about dropped to the floor. I joked with them and mentioned that most American women their age could barely get around without a cane. I asked if they had daughters who had also joined the profession. “No,” they replied, “we wouldn’t wish this job on our daughters or any of our family.” As Tira helped them up and assisted them in zipping up their suits, I could see what they meant. Though they continue to do their jobs, their hard work has taken a toll on their bodies. They walked slowly, hunched over with knees bent. Being a haenyeo is no doubt an honored profession, but it’s a lot of work. As our driver signaled for us to board, we snapped photos with the lovely women and exchanged bows of respect. As Tira and I headed off to explore the island, they no doubt looked for morsels of the sea, as they had done everyday for the past 60-something years. 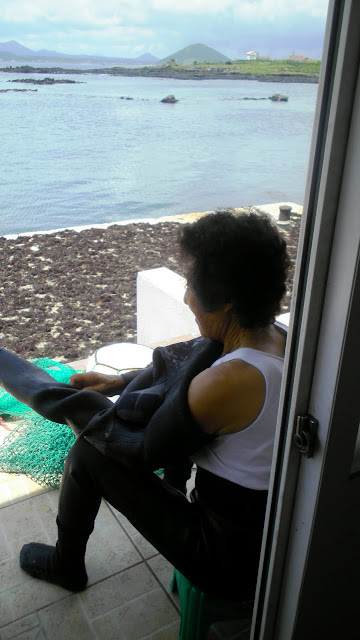 Haenyeo prepare for a dive on Udo Island. 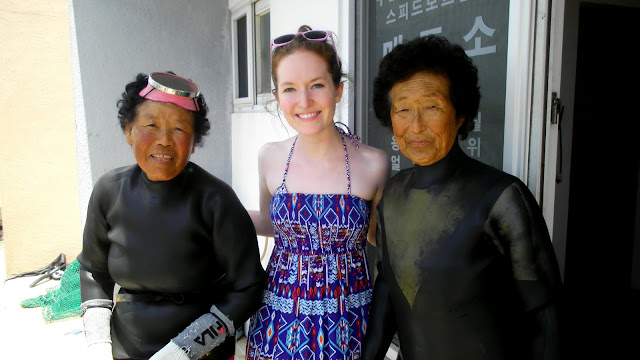 Meeting these lovely “mermaids” was a highlight of my trip to Jeju.

During my trip to Jeju, I almost forgot that I was in Korea. The pace is a bit slower, the air is fresh, and the vibe is purely tropical. Yet, in other ways, it felt much more culturally Korean than the mainland. Houses are still made of stone and the inhabitants embrace tradition. The haenyeo are truly a cultural treasure of Jeju. Yet, I suppose that in a country that is so apt to rapid change, traditions such as the jobs of these amazing women will one day fade away. But some things, like legacies, never die. I like to think that the stories of these women of the sea will continue on and inspire their listeners. Korea is a man’s country after all, but lest anyone forget that on a charming island off the southern coast of Korea, women once ran the show.