It seems that you, too, enjoy learning about all the things that make Korea… different. I had a lot of responses and clicks to my original post, Not-So-Normal Norms, so I’ve decided to make it into a segment. Every so often, I’ll post some things that I’ve observed to be unique about this great country.

1. Umbrella use: During the monsoon season, umbrella vendors can be seen everywhere, for obvious reasons. Storms can be pretty intense and a good, sturdy umbrella is a necessity. However, it seems that a lot of Koreans think that the rain is dangerous due to the pollution (and it may well be) so they continue to use their umbrellas when there’s a light drizzle or even a mist. The same goes for sleet, snow, or any form of precipitation. Yes, I’ve even seen citizens carrying them in the fog. Perhaps it is not only the water they fear, but also the possibility of their hair messing up.

On sunny days, Koreans tote them around to avoid the rays that threaten to darken or wrinkle their skin. As I’ve mentioned before, Asians in general are obsessed with having white skin, so obviously the sun is their number one enemy. Some older women wear Darth Vader-like visors but it seems that the umbrella is still a tried and true method of sun protection. 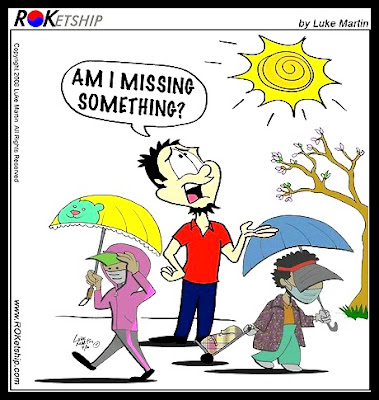 An expat-illustrated cartoon depicts the differences in umbrella norms in Korea. (Photo: ROKetship.com) 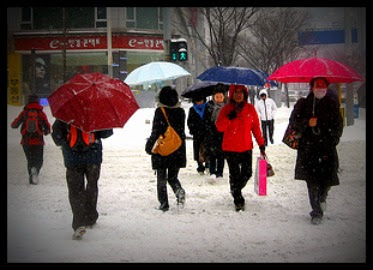 It’s obvious Koreans are not a fan of precipitation.

2. Bowing mannequins: I mentioned in my last not-so-normal norms post that advertising methods in Korea can be quite strange to non-citizens. From furry mascots to scantily dressed girls, I thought I had seen everything. Until, that is, when I passed a cell phone shop one evening last year and had the pleasure of being greeted by a hanbok-wearing, bowing, talking robotic mannequin. Without realizing it, I stumbled backward in shock, almost falling into oncoming traffic. Yes, the robot got my attention, that’s for sure. But it wasn’t in a good way. Perhaps mannequins don’t have the creepy factor in Asia like they do in the West, but I think it would be hard for anyone to say- even Koreans- that those mannequins are not strange. Yes, I said it. Strange. Call me ethnocentric, but there’s just no other way of putting it. These new, creepy methods of advertisement aren’t common… yet. Hopefully they won’t be anytime soon. 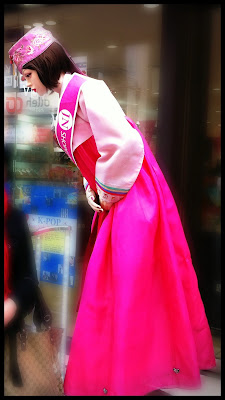 Even the mannequins are technologically advanced in Korea. (Photo: Myfatpocket.com)

3. Coffee straws: Go to any coffee shop in the West and you will almost always find the essentials for enhancing your beverage: sugar, cream, stirrers. So, when I came to Korea and was automatically given a plastic stirrer without any other coffee condiments, I was a bit confused. Green tea lattes and hot chocolate don’t really need additional stirring, after all. It took me a while to catch on until I started watching the locals consume their drinks. Instead of drinking from the appropriate slot in the lid, they were sipping it through the coffee stirrers like a straw. I could maybe understand this logic if the drinks were iced or cold but it seems that temperature doesn’t matter. Of course, not every Korean drinks in this manner, but it is fairly common. I just haven’t figured out why yet. Sanitary reasons? The celebrities do it this way? A method to prevent teeth staining? Who knows? 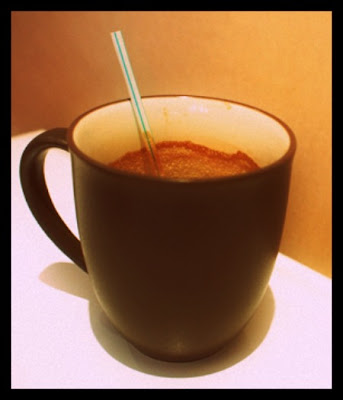 Coffee is served hot in Korea, and with a straw.

4. Construction dummies: Speaking of inanimate objects representing people, another interesting sight in Korea is that of the construction dummy. These dummies, dressed in bright yellows and reflector tape, can be seen in areas of road work and construction. The first time I saw one of these Lego-like guys, I giggled when I realized it was not a real person. It seemed a bit weird, but practical at the same time. In America, empty police cars are often placed along the highway to defer speeding. Sometimes, cardboard cutouts will be placed in the car to make them look as if they are manned. So, the concept of the construction dummy is similar. It works in the same way and seems to be effective in slowing drivers down, all the while saving the government money. 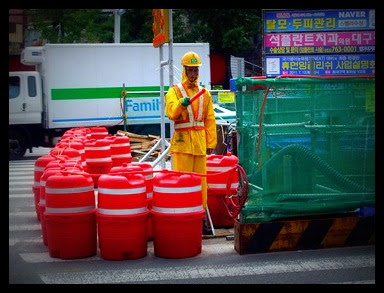 Drivers tend to slow when they see these dummies throughout areas of construction in Korea.

5. Toothbrush sanitizers: Koreans brush their teeth wayyyy more than us Westerns typically do. They are adamant about brushing immediately after every meal. Many of my Korean friends tote a toothbrush and toothpaste around in their bags and it is not uncommon to see people brushing away in public places, from the movie theater to the amusement park to the club. American dentists would be proud. So, what’s weird about consistent brushing? Nothing, of course. But, what is a bit atypical is the instillation of toothbrush sanitizers in schools.

Every day after lunch, my students brush their teeth and are then instructed to place their toothbrushes in one of these sanitizers. When the door is closed, a buzzing noise and a UV light indicate that the disinfecting process is underway. I’m not sure how efficient these things are or even how they work. I mean, God knows that toothbrushes are pretty much blanketed with germs. Plus, the toothbrushes are all placed extremely close together in these box-like devices. Not a good set-up when ailments like foot-and-mouth disease are prevalent and highly contagious. But, I’m no scientist. Perhaps the technology does work. I highly doubt that these devices would ever find their way into American schools, but they have become quite the norm here in Korea. 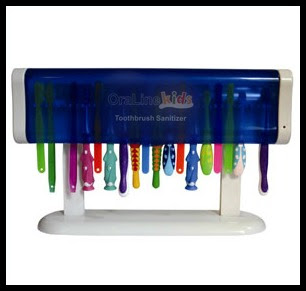 Toothbrush sanitizers are all the range in Korea, particularly in kindergartens.

I once read a quote from Lost Horizon by James Hilton. He wrote, “There came a time, he realized, when the strangeness of everything made it increasingly difficult to realize the strangeness of anything.” I’m finding that this is becoming truer the longer I live here in Korea. Still, it’s always fun to look around and realize that some things will always stand out as different (and sometimes in a good way), no matter how long I live here.
1
Previous Post
Next Post