Vying for the Vote

I love this time of year. No, not spring. Not Easter, either. It’s election time in Korea!!

Two hundred ninety-nine new assembly members will be elected this upcoming Wednesday for a four year term. New members will come from one of the many parties established in Korea’s multi-party system. Currently, conservative parties dominate the assembly, which isn’t really surprising considering the conservative nature of the country.

Now, I’ll be the first to admit that I know close to nothing about Korean politics. In fact, I hate politics in general. So, what makes me like this time of year, other than the fact that I get a day off of work? (Yes, it’s a national holiday in Korea!) Well, simply put, it’s entertaining.

I asked a Korean friend if mudslinging TV ads were allowed in Korea like they were in the States. She said that in general they were not, unless they were very inconspicuous. So, how do election hopefuls get ahead in the race? Let’s just say that campaigning techniques used in Korea are a bit more animated than those used in the West.

Everyday this past week, I’ve been stirred by the noise of loudspeakers blaring from cars passing my apartment and classroom. Not until looking out my window and seeing trucks lit up and covered with larger-than-life-sized photos of election candidates did I realize what all the ruckus was about. From the morning to the late evening, these trucks can be seen and heard all over the city. 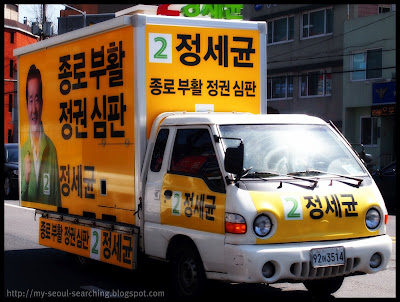 A campaigning truck in Jongro-gu, Korea. This guy’s face is all over the place!

In addition to the trucks, candidate supporters gather in groups, doned in that candidate’s color, displaying that candidate’s number. They bow in unison, greet passerby, and sometimes even sing. Yes, sing. I guess there are about ten or so candidates for each district but it has become obvious that some have a bigger following than others.

Still, the best campaign technique I’ve seen are the performances. When I was walking around in Hongdae this weekend, I noticed a large group of people dancing about with central focus on a young guy wearing an over-sized bow in his hair and strumming on a guitar. It wasn’t difficult to figure out that this act was a campaigning strategy but what really surprised me was that the guy singing was actually the candidate. Even though his commitment was admirable, it didn’t beat the troupe of middle aged supporters performing a choreographed dance number like this one I witnessed a couple years ago during a local election. 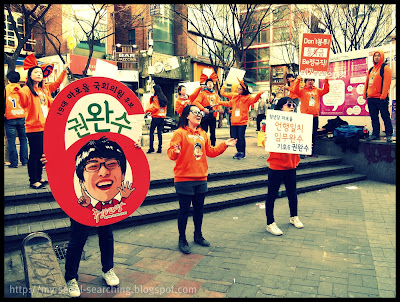 An election candidate and his supporters perform for potential voters in Hongdae. 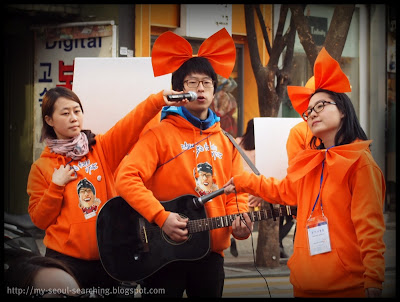 If his lawmaking abilities are anything like his singing talent, Korea will be in good hands with this guy.

I’m sure that there is some controversy involved in Korean elections, as there is in elections all around the world, but I have to say that I much prefer to watch candidates dancing for voting support rather than publicly bashing their opponents like we often do in the West. Sure, dancing isn’t the most conventional tactic, but it’s fun nonetheless, even if it has little influence on voters. Whether the strategies work or not, the results on Wednesday will no doubt determine the country’s future for the next four years. Let’s hope the right people win.