I’ve decided to continue sharing my observations of Korean cultural norms with a “Not-So-Normal Norms” segment. As noted in parts one and two, these posts are in no way intended to degrade Korean customs or offend the people that live there. These are simply my observations on cultural practices that do not exist in the Western world that I have had to adapt to during my time here in Korea.

1. Hangover drinks: It’s no secret that Koreans like to drink. A lot. In fact, just a few weeks ago, it was declared that Jinro soju is the most sold liquor in the world. Considering only a small portion of the world’s population consumes the drink, that’s big news. Even those that don’t enjoy drinking have to learn how to consume soju, as there are established rules and etiquette that must be followed by all. Drinking plays an important role in the workplace, as well, and in some places it is understood that an employee must engage in all-night drinking binges in order to be promoted. So, how does one function after said all-nighters? Hangover drinks, of course.

Dawn 808, Condition Power, and Morning Care are a few of the big name hangover drinks that are sold in convenience stores all over Korea. I’ve seen some pretty comical commercials advertising them, usually featuring themes of beer goggles or business men falling asleep on the sidewalks (which is another norm). These drinks are said to contain certain ingredients that decompose the alcohol in one’s system. I’ve never tried any of them so I can’t personally vouch for their effectiveness. I have met people, however, that swear by them. 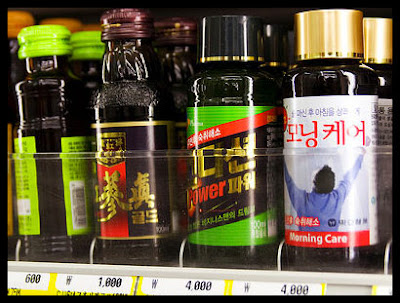 Hangover drinks are a staple in Korean convenience stores as well as businessmen’s diets.

2. Toilet paper economics: I’ve blogged about my personal experiences regarding Korean bathrooms and my hatred of the squatty potty. One bathroom-related practice I’ve also had to adopt is carrying around tissue wherever I go. Though most bathrooms usually have toilet paper available in each stall, others only have one common roll near the sink or entrance. Still others have none at all. Still, what makes the toilet paper deficit in bathrooms strange is the toilet paper surplus is restaurants.

At many inexpensive restaurant chains and street food stalls in Korea, napkins are non-existent. At times, small paper-thin napkin-wannabes sit in holders on tabletops. They’re efficient enough and didn’t really seem odd when I first arrived. What did seem strange, though, were the rolls of toilet paper hanging on the walls. I followed the locals’ leads in taking a few sheets when needed, but remained surprised. I still buy napkins for use in my apartment but these days I don’t think twice when using TP at a local eatery. 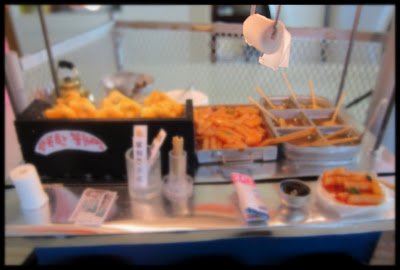 Toilet paper is used in place of napkins in cheap eateries, like this street food stall. (Photo: KoreaBridge)

3. Mirror, mirror: I won’t say that Koreans are vain. I will note, however, that personal image is of great importance in Korea, especially in Seoul. Koreans love to look at or snap photos of themselves many times throughout the day. It’s very common to see girls in public places engaging in “self-ca” photo shoots making a variety of different facial expressions and hand gestures. I once watched a twenty-something female go through an album of at least 100 or so photos of herself on her phone, pausing periodically to examine herself. Yes, I was being nosy, but couldn’t help but be a bit shocked. If she had been in America, those around her would no doubt label her a narcissistic whacko. 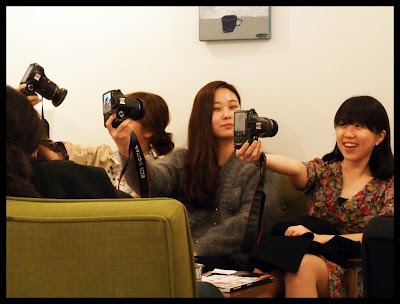 Because of the looks-are-everything cultural mindset, mirrors can be found just about anywhere in the city. Public bathrooms have areas dedicated to mirrors and the lines to check out one’s reflection are usually longer than those for the toilets. Some bathrooms have tried to better serve their visitors by placing mirrors in the stalls. Strange, yes. Frustrating, even more so. Said mirrors encourage girls to think it’s okay to spend 30 minutes primping while others wait outside for their turn. Yet, the most bizarre place I have seen a mirror was in Apgujeong, a neighborhood known for its plastic surgery clinics and high end fashion scene. I stopped in a coffee shop for a latte when I noticed something a bit out of place. Lined up along a wall were makeup mirrors… in the middle of the cafe! Strangely enough, I wasn’t too surprised by the sight. It is Korea, after all. 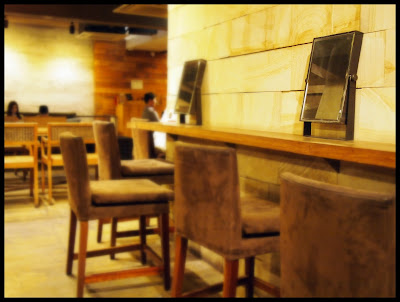 Makeup mirrors in the middle of a coffee shop? Only in Korea!

4. Table buzzers: When I went home in December, I was reminded how obnoxious it can be to be bothered by waitstaff again and again during a meal at a restaurant. Yes, it is their job to check on customers, but their unwanted presence can ruin the mood of a nice meal. Such interruptions do not exist in Korea, as customers generally shout at the waiters to get their attention (it’s totally polite). At some restaurants, buttons are installed in the tables. Upon being pressed, they signal the waiters with the corresponding table number and immediately reply to the customers’ requests. Table buzzers are one of those not-so-normal norms that are so-totally-awesome. 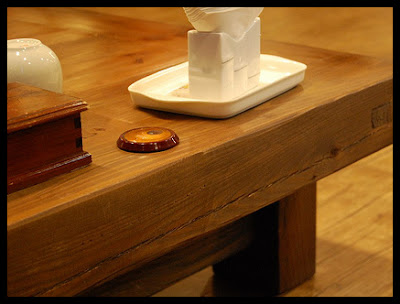 Table buzzers are efficient and convenient, especially when restaurants are packed. (Photo: Jbrieu.info)

I’ve come to embrace these cultural differences, which is half the battle of overcoming culture shock when living abroad. Sure, it’s not always comfortable and I’ll always find some things that bother me. Still, exploring the more bizarre cultural practices is one of the things that makes living in Korea so enjoyable.