By Mimsie Ladner on Sunday, October 21, 2012
It’s time for more not-so-normal norms!  This time, I talk about the Korean version of a milkman, cell phone accessories, personal space, and movie theater culture.  Please remember that this segment has been written to point out differences that I’ve noticed in cultural norms between my home country, America, and my new home, Korea.  My comments are in no way intended to degrade Korean culture or Korean people.

1.  Yogurt ladies:  Before my time, Americans enjoyed the convenience of having their milk delivered to their doorsteps by the friendly neighborhood milk man.  Then, the refrigerator became a common household appliance and the milkman died.  Interestingly enough, he still exists in Korea.  In the form of a curly haired, cart-toting older woman, that is.  Yogurt ajummas– I’m unsure of their official title in Korean- can be found just about anywhere in Korea and are easily recognized by their light yellow uniforms and signature hats.  They do make morning deliveries but they also sell individual cups of yogurt and mini bottles of ridiculously sweet drinking yogurt to passerby on the street.

What’s strange about the institution of the yogurt lady is that the majority of Koreans do have refrigerators (two of them, actually) and dairy is not exactly a component of the traditional Korean diet.  I’m not sure when yogurt became so popular, but for whatever reason, Koreans love it.  Especially kids.  Nevertheless, the yogurt ajummas satisfy the cravings of Korean yogurt lovers all over the nation on a daily basis. 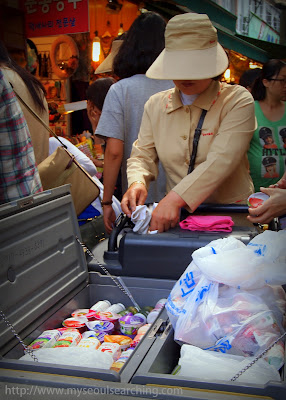 A yogurt ajumma sells yogurt cups to customers in an outdoor market in Busan, Korea.

2.  Cell phone bling:  When I first arrived in Korea back in 2009, the hot cell phone accessory was the cell phone charm.  Even I fell for the cutesy, glitzy, and sometimes comical charms sold in accessory shops throughout Seoul.  Since then, smart phones have basically replaced the classic flip and slider phones that everyone owned just a few years ago.  Seeing as most of these newer, fancier mobile appliances lack the spot to put a charm, Koreans have had to look elsewhere to customize their phones.

Enter cell phone cases. “What’s not-so-normal about that?” you ask.  In Korea, cell phone cases warrant their own fashion week.  From ears that stick out to furry cotton ball tails and quarter-sized rhinestones to obnoxiously bright colors, Korean phone cases make a statement. 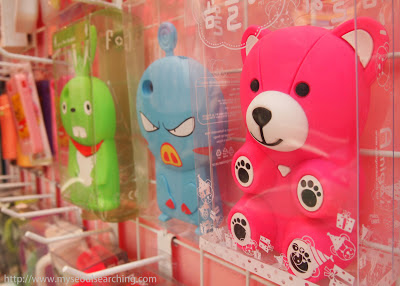 In Korea, cell phone cases take the form of colorful, cute animals with ears and tails that stick out.

3.  Get outta my bubble!: America is a big country as far as land area is concerned.  There, we have the space to move around freely and expect each other to stay within his or her own personal bubble.  Korea, on the other hand, is about the same size as Indiana and has about ten times the amount of people.  So, in Korea, particularly in the bigger cities like Seoul, there is simply no room for a bubble.  This has been probably the most difficult norm to adjust to while living here and I still find myself frustrated being bumped into or stepped on all the time without being acknowledged.

Public transportation is an area where this aspect of the culture is magnified.  In addition to being cramped, the placement of people on the subways is a bit strange to me.  In America, if we are not seated on buses or subways, we hold on and face sideways, whereas, in Korea, passengers stand facing those seated.  Although I don’t notice it anymore, it felt extremely awkward at first to have someone stand in front of me so closely face to… crotch. 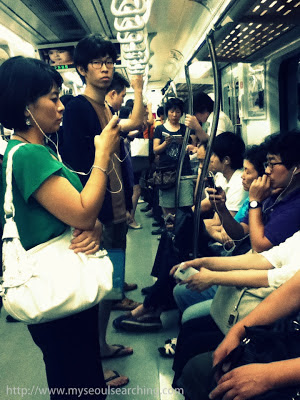 4.  Popcorn, Coke, and squid:  Going to the movies is always a fun outing in any country.  In addition to Korean films, subtitled American movies are common at CGV, Cinus, Lotte, and other big movie theaters in urban areas (find theaters in Seoul and English movie times here).  One thing I found really cool about going to the movies in Korea is that you can reserve specific seats when purchasing your tickets.  It’s great because you don’t have to rush to the theater early to get your desired seat.  As long as you book ahead of time (which is super easy thanks to the internet and smart phone apps) you won’t be cross-eyed in the front or stuck with high school couples making out in the back.  Though, in some theaters, there are “couple’s seats” like CGV’s SweetBox seats which offer move privacy for this purpose, though they can be pricey.

Movie theater concessions are also a bit different than in the West.  First of all, they are extremely cheaper and are often sold in sets.  For about $8, you can get two drinks and a large popcorn (butter, caramel, or onion flavored), which is a steal if you ask me.  In addition, movie goers can also purchase beer, choco pies (a popular snack amongst kids) and… wait for it… bags of peanut buttered dried squid.  Yes, it sounds repulsive, but don’t knock it until you try it. 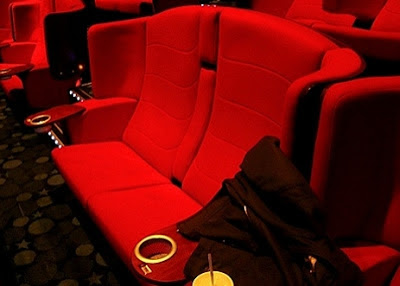 Do you have milkmen in your country? How does personal space affect those where you come from? What do you eat when you go to the movies in your hometown? Please share your own cultural norms in the comments box below.

Be sure to check out Part 1, Part 2, and Part 3 of Not-So-Normal-Norms to learn even more about Korean cultural norms.