Exploring Korea on the K-Shuttle

By Mimsie Ladner on Saturday, December 21, 2013
Seoul, South Korea is slowly but surely becoming recognized as a favorite tourism destination among travelers for its diverse neighborhoods, mouth watering cuisine and exceptional shopping facilities.  In addition, Seoul is constantly making efforts to better cater to the religious, dietary, and medical needs of its international visitors while signage in English, Japanese, and Chinese makes the city easy to navigate.

What most tourists do not realize, however, is that Seoul is merely a piece of the big picture and there are a number of other cities that are well worth a visit, especially for those eager to experience the “real Korea.” Many visitors are interested in exploring other regions around the country but often feel intimidated by the language barrier; just the thought of having to plan transportation, book accommodations, and research sightseeing destinations is so overwhelming that most prefer to avoid it all together.

That is, until now.

Enter the K-Shuttle, Korea’s newest tour bus that allows travelers to conveniently and comfortably visit the very best the country has to offer in a single trip.  Interpreters of all major languages are with the group at all times and ensure that every aspect of the tour runs smoothly.  Yet, the best thing about the K-Shuttle is that there is no need to worry about planning; tour participants need only to show up, sit back, and enjoy the ride. 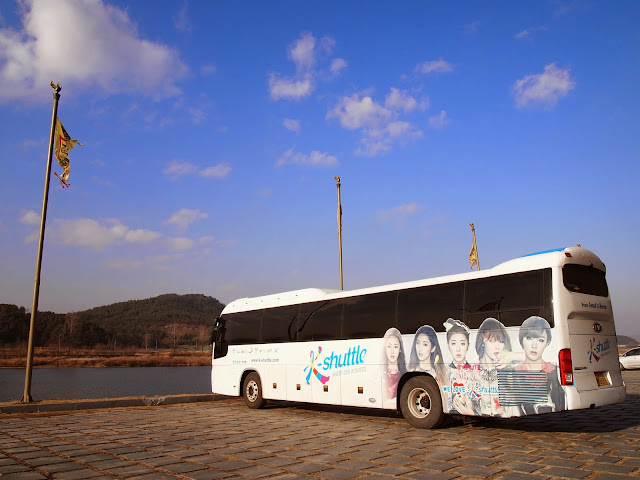 Earlier this month, I hopped aboard the K-Shuttle for their two night/ three day excursion which brought me to a number of cities dotted throughout the Western and Southern regions of the country.  I saw a lot.  I ate a lot. I took far too many pictures.  So, for your sake, I’ll simply include the highlights to keep the dozing off at a minimum.

It took a few hours to reach Gongju from Gwanghwamun Plaza in Seoul.  Our trip would begin with a history lesson of sorts and a glimpse into the royal lifestyles of the Baekje Dynasty at the Tomb of King Muryeong.  Discovered by accident in 1971, King Muryeong’s tomb is significant because it was the first of its kind to record the status and date of death of the deceased.  Although the real tomb is off-limits to visitors due to preservation efforts, the tomb replicas are quite exquisite and almost don’t even seem Korean. Reproductions of found artifacts- jewelry, swords, shoes- add a nice touch to the nearby museum.

Mr. Kim, our charming English guide, attempted to talk the museum’s staff into letting us peek into the interior of the tombs, but was unsuccessful.  Still, I appreciated his devotion to ensuring that we have a memorable experience. 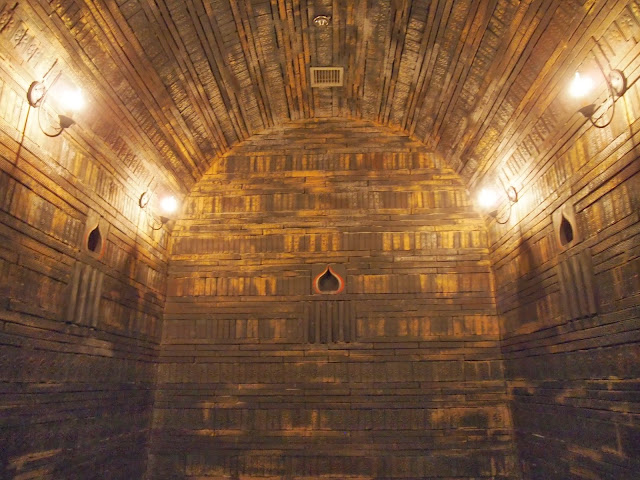 We ventured onward to Gongju Gongsanseong, a mountainside fortress with impressive views of the city before having lunch at Jangsu Goeul.  Marinated grilled pork, vegetable side dishes and noorungji, an interesting (and fun to make) soup of burned rice.  For me, food is always a highlight during my travels and lunch in Gongju would be the first of many impressive meals during the trip.  Although lunch and dinner are not included in the tour price, visitors can rest easy knowing they will eat well at quality restaurants. 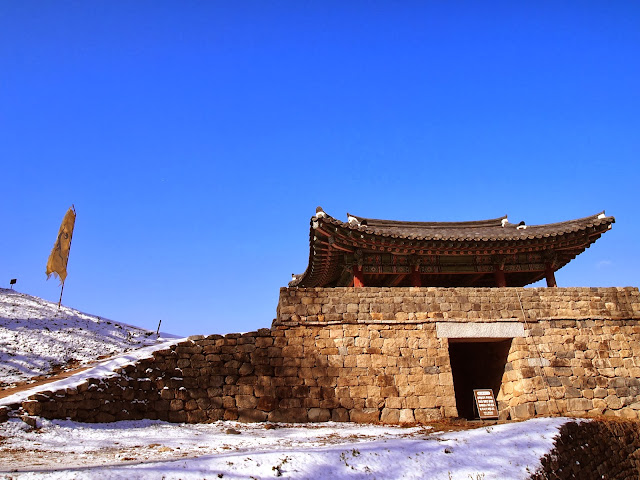 Baekje Cultural Land in the city of Buyeo was our next stop and just as we arrived, it began snowing, making the already picturesque replica folk village and palace structures even more striking.  This cultural amusement park, if you will, is a place I could spend an entire afternoon.  The buildings and their furnishings are designed to appear just as they did during the Baekje dynasty and there’s even a hologram king who talks about the geography of the ancient capital in four different languages.  Cheesy?  Sure, but also entertaining. 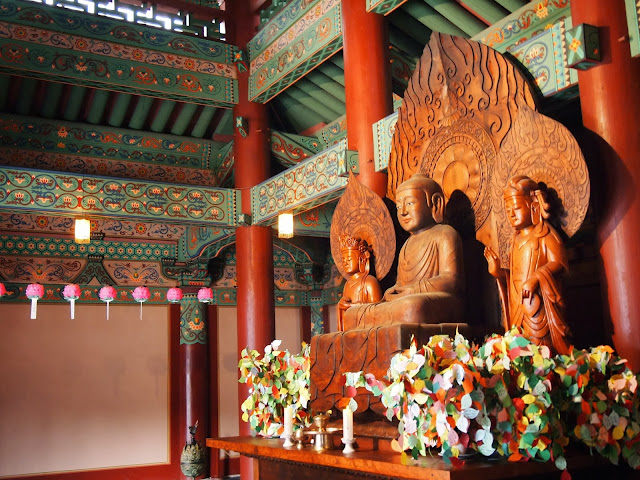 Across the city, we started on a trek at Busosanseong, a mud fortress located on top of Buso Mountain. Busosan, which was once deemed the guardian mountain of the city is home to many historical landmarks. Walking along the mountain paths gave us an usual but pretty view of fresh snow and autumn foliage, not yet ready to fall.  The trek was a reminder that no matter where I travel in Korea, spectacular nature walks abound. 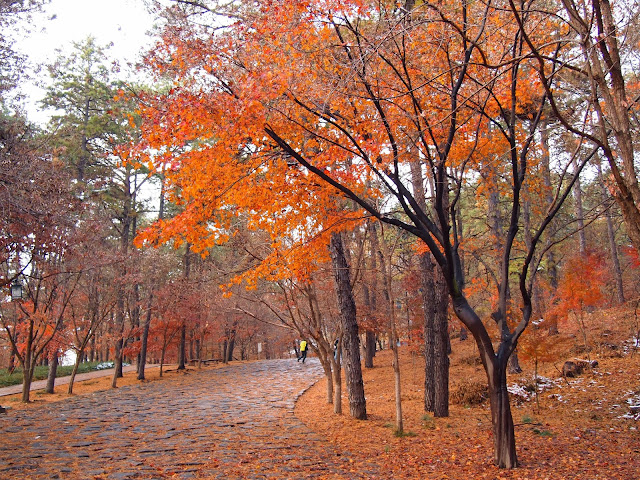 At the end of the trail was Nakhwam Goran Temple, a religious site the boasts the area’s most famous water spring.  It is said that whoever drinks this miraculous water will look three years younger.  I had high hopes but walked away disappointed, looking just as I did that morning.  Fortunately, a ferry ride back to bus was enough to lift my spirits and had me ready for Jeonju, one of my favorite Korean cities.

We were each given a map and were allowed to wander Jeonju’s Hanok Village.  I disregarded the map and decided to get lost in the neighborhood’s alleys instead.  I happened upon some quaint traditional homes and gorged on walnut cakes, yeot (taffy) and picked up a few bottles of makgeolli (rice wine) for the road. 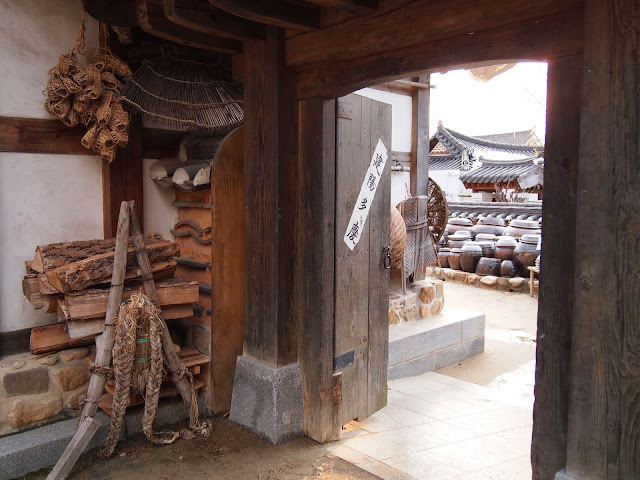 After a full day, my tour mates and I passed out early at the Prado Hotel in Gwangju, our stopover for the night.  Morning came much too soon and we were off again to the Gwangju Folk Village.  We were guided by a volunteer group of elderly men, long-time residents of the city with a palpable passion for their country’s history and culture.  I spotted tools and clothing I recognized but also learned about some traditions I had never heard of before. The gentlemen were eager to answer my questions and talk about their childhoods.

We headed south to the city of Suncheon’s Songgwangsa, a Buddhist temple most famous for producing some of the country’s highest-ranking monks.  The architecture here was splendid and unlike anything else I’ve seen in Korea.  Monks walked the premises quietly but were quick to greet us warmly as we crossed paths.  As we snapped photos of the exquisite gardens and temple buildings, I made a mental note to return here in the spring or fall, when, I imagine, it is even more impressive. 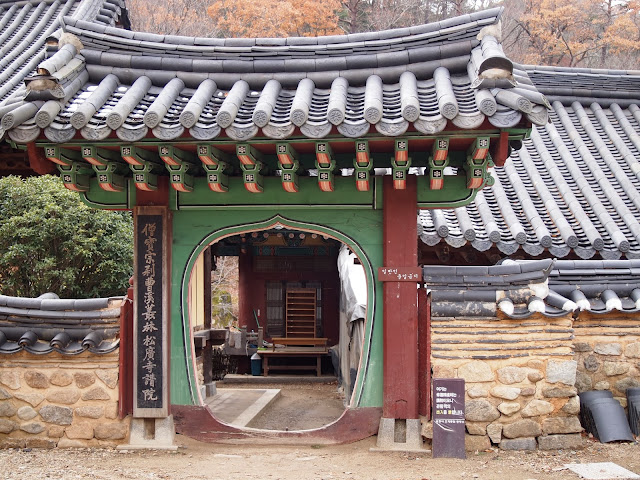 As the sun lowered in the sky, we made our way to Suncheon Bay Ecological Park, an important wetland home to diverse plants and wildlife.  Following the walking paths, we found ourselves in a sea of reeds which resembled waves as the wind blew softly through them.  It is said that of all the world’s wetlands, Suncheon Bay attracts the largest number of rare birds and we were fortunate to catch a glimpse of a few, seemingly heading south for the winter.  The ecological park ended up being one of my favorite stops on the tour, not only because it was so picturesque but also because I had never seen anything like it in Korea. 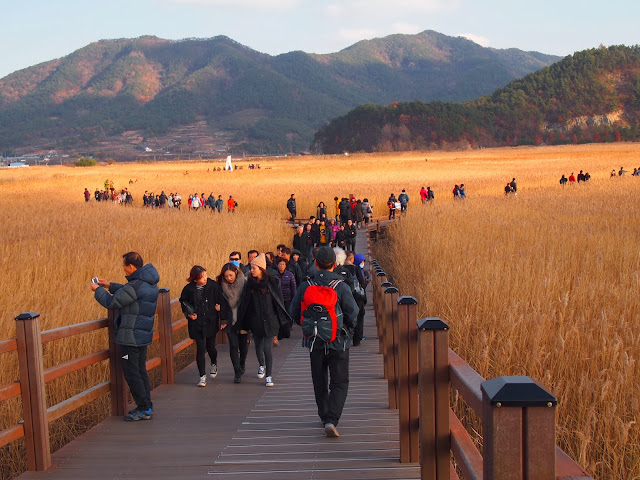 It didn’t take long to arrive in Yeosu, a city on the southern coast I had visited just a year ago for the 2012 World Expo.  The expo grounds were eerily quiet, especially compared to the chaos I had previously experienced there, but I welcomed the calm.  The city has attempted to utilize the abandoned buildings as a tourism destination with ziplines, kayaks and entertainment stages but the climax of our visit here was dinner.

After popping into a tiny mom-and-pop joint not far from the city’s fisheries market, we didn’t waste any time ordering haemultang, a hot pot of octopus, crabs, mussels and other goodies from the sea.  The seafood was so fresh that it was still moving when it arrived at our table, adding to the novelty of the dish.  We threw back a few glasses of soju and dug into sides of gejang, fermented crabs.  The attentive ajumma running the restaurant made sure that our plates were always full and wished us well and we boarded the bus to the Yeosu Ocean Hotel. 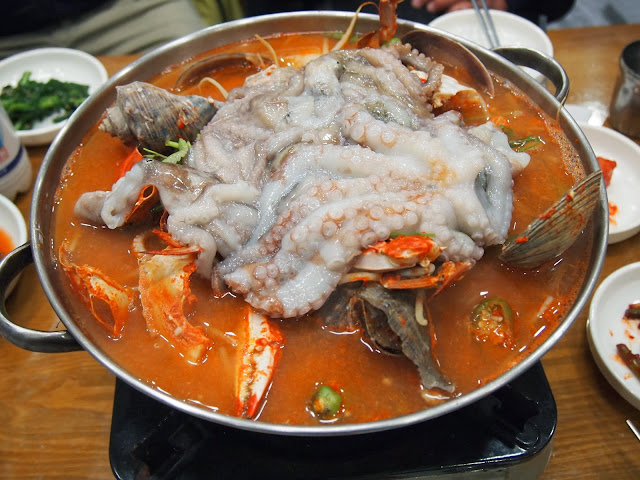 I slept well in my comfortable and toasty room and set my alarm to catch the sunrise.  Fortunately, the window of my room provided an incredible view of the ocean so I stayed tucked in bed and sipped hot green tea as I watched a blazing red sun arise from mountains dotting the distant horizon.  I would have been happy spending all afternoon in my room or in the gorgeous spa the hotel boasts but it was on to Jinju, so I packed up my bags, gorged on a tasty Western breakfast, and said goodbye to Yeosu. 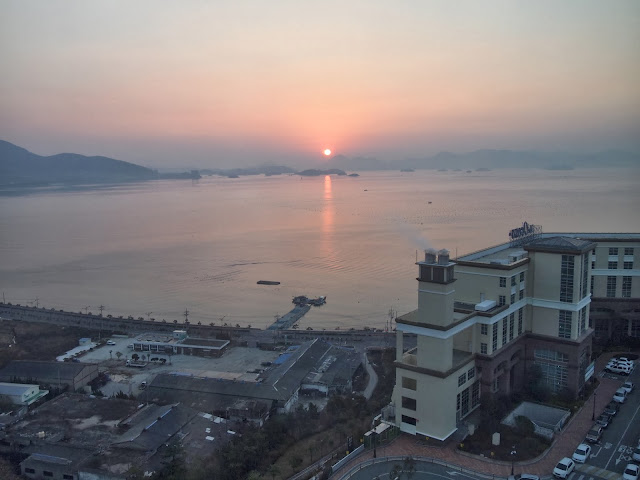 The Jinjuseong Castle, a fortress used during the Japanese invasions of the 14th and 16th centuries, proved to be as aesthetic as it is historical.  One of the more interesting moments was learning about and visiting the shrine of Nongae, a gisaeng (Korean version of geisha) who proved her loyalty to her country when she seduced a notable Japanese general to a cliff and hurled herself into the river, bringing him along with her.  The fortress is the perfect place to enjoy a nice quiet afternoon and an oasis of green, right in the middle of the city. 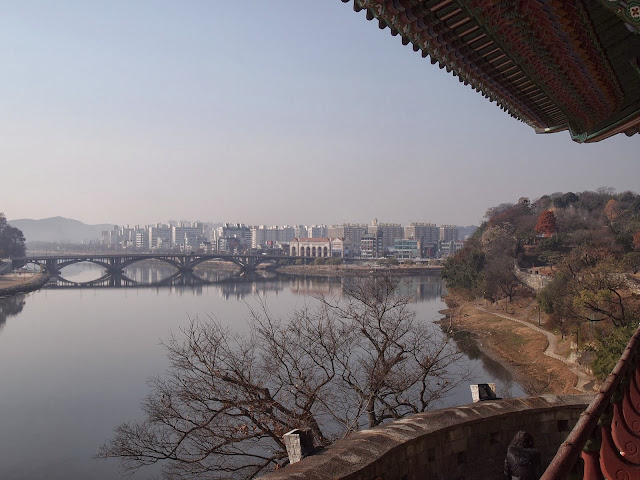 Busan was our last stop on the tour.  Usually, the K-Shuttle brings participants to Haeundae Beach, but we didn’t have much time to look around so we only briefly enjoyed the sights and sounds and tastes of Korea’s second largest city before boarding the bus back to Seoul.  It would have been nice to see the north and south eastern routes the K-Shuttle takes on the 4 and 5 day tours but I was exhausted from a weekend of traveling and decided those cities would just have to wait until next time.

I expected to see more or less of what I’ve experienced in my travels here over the past 4 years but I ended up being pleasantly surprised.  In the end, I was able to see parts of Korea I never even knew existed and probably wouldn’t have been able to find on my town without the help of the K-Shuttle.

Like any good sampler platter or tasting event, there were parts of the trip that left me wanting more of some destinations and less of others.  But, because of time constraints, we moved along quite quickly from one place to the next.  Although this route was rushed, it is an ideal tour for those traveling in Korea wanting to see a lot with a limited amount of time or for those desiring a stress-free affordable excursion around the peninsula.

K-Shuttle trips depart from the Donghwa Duty Free Shop in Seoul’s Gwanghwamun Plaza.  Reservations must be made 5 days prior to the desired departure date.  Reservation is on a first-come, first-served basis and is only possible when seats are available.   Reservations can be made at the K-Shuttle website.

For more information including alternate routes and route itineraries, click here.  For video clips from the tour, visit this website.

*Although this post is partially sponsored by K-Shuttle, the opinions are, of course, my own.