By Mimsie Ladner on Tuesday, November 12, 2013
It’s rare, if not impossible, that you will find yourself having a bad Korean meal in Korea.  It just doesn’t happen.  But every so often, usually when it’s least expected, you will experience culinary nirvana.  It will be a meal that proves to be unique from any other you’ve had in the past, one that changes you, one that finds you awake the following morning wondering if it was all just a dream.

It might be a plate of steaming mandu made with fresh kimchi at a street stall on a frigid winter day. Or a perfectly cooked jeon, served up with a bowl of homemade makgeolli in a back-alley hangout.  It might be consumed alone, with a new lover, or a group of old friends.  The meal might be a new gastronomical concept, unfamiliar and exciting, or may be Grandma’s secret recipe, instantly recognizable and comforting.

My most recent encounter with food bliss was in Jeonju, capital of North Jeolla Province, and UNESCO’s 2012 City of Gastronomy.  My dining experience was both new (at least for me) and old- so old, in fact, that it gives a whole new meaning to family recipe.

Of course, I knew I was in good hands when I boarded the bus in Seoul with O’ngo Food Communications.  I had traveled to Andong with them last year and was not let down, so my expectations were high, aware of the fact that we were traveling to the food capital of Korea.  What I didn’t know, however, was just how much of a treat I was in for.

After crossing the threshold of our destination, the well-concealed Hakindang House, it became apparent why this special place is often considered the most well-known traditional house in Jeonju’s Hanok Village. Perhaps it was the time of day, or the crisp air and autumn temperatures, but everything about this place seemed special.  We were promptly greeted by Seo Hwa-soon, the proprietor and lady of the house, who gave us a brief history of her home. 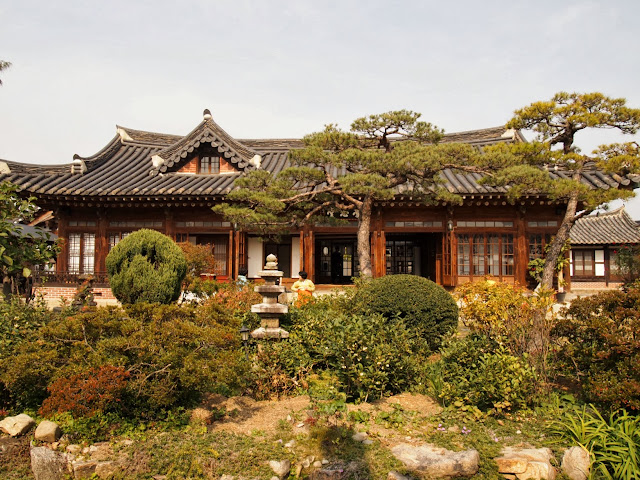 Constructed in 1908, Hankindang was originally commissioned by Baek Nak-jung, a high ranking official during the reign of King Gojong.  Since then, it has been renovated and has decreased in size, but it still reflects the traditional architecture of the Joseon Dynasty, the era in which it was built.  The home has remained in the family since and has been preserved beautifully thanks to the efforts of the Seos over the years.

But it’s not just the beauty of the architecture that inspires the family to maintain the home.  The Seo (pronounced “Saw”) family is considered a jong-ga, a household descended from a distinguished ancestor through the eldest son of each generation.

These households, though not as common as they once were, generally have more than 500 years of history, carrying on their ancestor’s traditions that follow the neo-Confucian ideals of the late Joseon Dynasty.  To this day, these families still practice ancestral worship and highly value scholarship, ethics, and family relationships, the foundation of Confucianism.  In a country where everyone is focused on tomorrow, the Seos are unique in that they are constantly looking to the past to learn how to live in the present and preserve what they feel is a necessary cultural asset to the survival of Korean society.

As she explained the rich history of the home, I couldn’t help but be in awe of the perfectly manicured garden, which, unlike most gardens in Korean homes, sat in front of the main building. Adjacent to a lotus-adorned pond was a well that had apparently been there since the house was first built and was used over the years as a storage area to keep kimchi and gochujang cool.

The main building of the house was originally designed for pansori, a traditional Korean musical performance, and was the first opera theater constructed in Korea.  Mrs. Seo led us into the main room where we were seated on plush cushions and were entertained by local musicians.  Dressed in colorful hanbok, the performers encouraged us to participate with energetic shouts of encouragement:  Eolssigu! Jota! Geureotchi!  I had seen pansori before, but experiencing it in its birthplace was incredibly special. 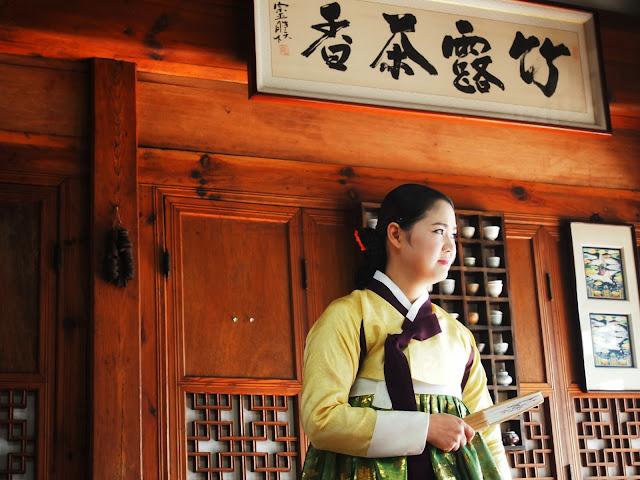 The heartfelt Jindo Arirang, or unofficial national anthem of the region, was the perfect interlude to what would be the focus of the day: lunch.

My tour mates and I shot each other surprised looks and mouthed Wows! when the staff brought out small individual tables topped with fancy brass bowls and covered dishes and a menu that had us as giddy as kids in a candy shop.  We each sat at our own table and were informed that we would be dining just as Korea’s aristocrats did during dynastic times.

We lifted the lids of the dishes one by one to reveal a variety of banchan (side dishes), all of which were presented beautifully.  I recognized a few: braised anchovy, cabbage kimchi, julienned radish. But there were still others that were unknown to me.  Fortunately, Jia Choi, adjunct professor of Korean food culture at Yonsei University, was there to explain in detail every morsel we sampled and each traditional beverage we sipped.  The staff continued to bring out course after course with each dish being more impressive than the previous and I began to worry that I wouldn’t be able to finish it all.  I savored each bite of the short ribs, pan-fried clams, and grilled song-i mushrooms until I couldn’t eat any more. 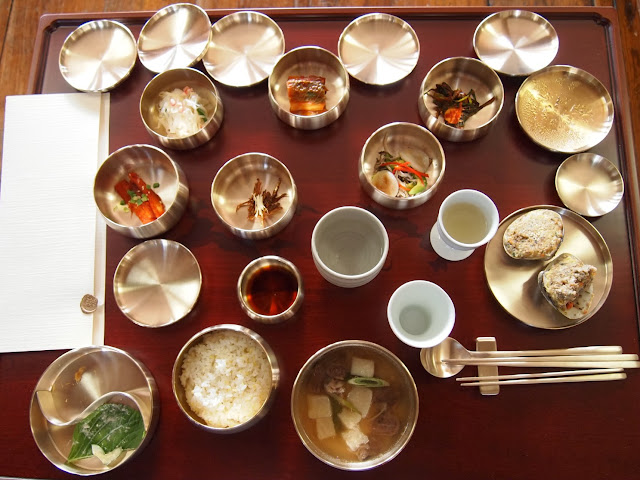 The flavors of the meal were good.  Very good.  But, perhaps what made the meal even more memorable was knowing that this wasn’t just Grandma’s recipe.  These very meals had been served up using the same ingredients and cooking methods for the past century.  As with many jong-ga homes, meals are prepared using the traditional ways to maintain the flavors of the past; this is particularly important during ancestor memorial ceremonies, when it is believed that the spirits of ancestors return to the home to “eat” the meals they most enjoyed during their time in the living world. 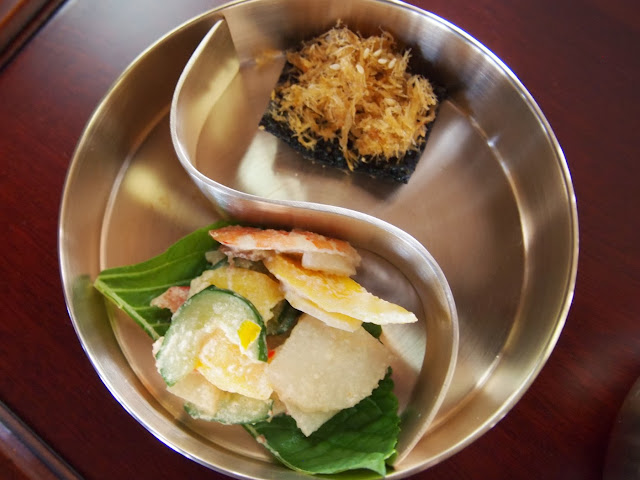 As an intermission between lunch and dessert, Mrs. Seo gave us a tour of the main building.  She explained the architecture and the scientific reasoning behind it before bringing us into the attic, a room usually off-limits to the public.  For the first time since my arrival in Korea, I was able to see an ancestral tablet in a family home.  Above it hung the portraits of the first born sons of the family for the past five generations.  Also pointed out were the incense holders and dishes used in jesa, ancestral rites, and bundles of hanji, handmade paper, used to insulate the walls and doors of hanok during the colder months. 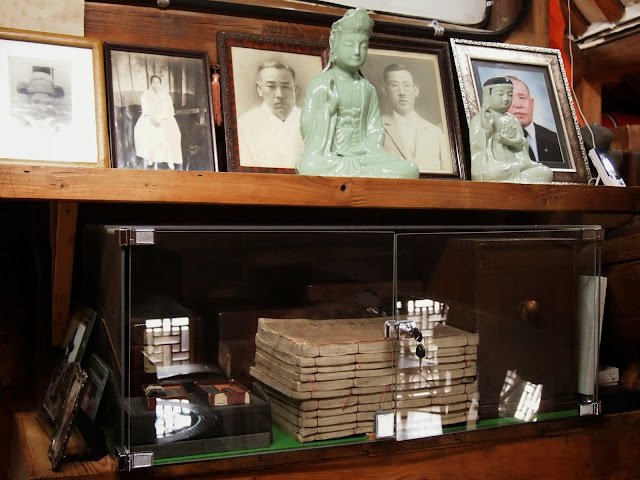 Mrs. Seo continued on, pointing out the chest presented to the her family at the time of her marriage proposal; traditionally, these chests contained gifts of jewelry and fine silk used to make the bridal gown.  She also mentioned that her son had just been married at Hakindang.  I suppose the use of the more modern wedding halls would be blasphemy for a jong-ga family like the Seos, so a traditional matrimony service at a beautiful hanok would only make sense, and would be my choice, too. 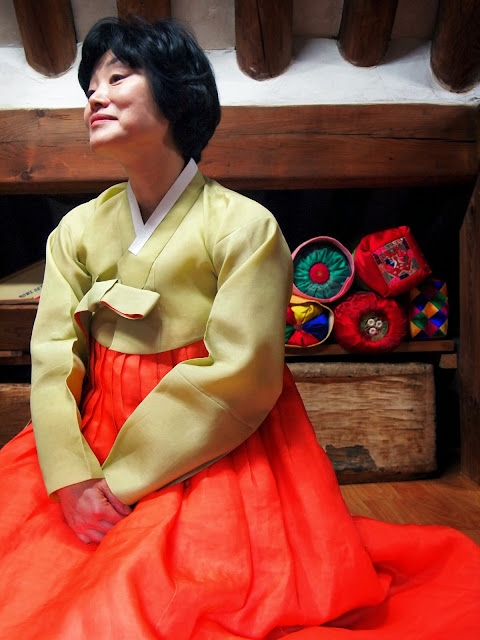 I wanted to stay in that little room all afternoon.  I felt like each candlestick, each book, each photo had a story to tell and I wanted to know them all.  But, our time was limited and Mrs. Seo wanted to offer us a final act of hospitality before we headed back to Seoul.

We were gathered a final time in the main room for a hot cup of tea.  Again, I was surprised by the uniqueness of this seemingly common afternoon tradition.  Setting a large bowl on the floor, we all took a look at the gigantic white lotus flower whose flawless petals floated gently on the water.  The flower, that was picked from the home’s pond, gave the tea a fragrant but not overpowering aroma. We sipped it as instructed, snacking on the traditional tea snacks that had been set out for us. 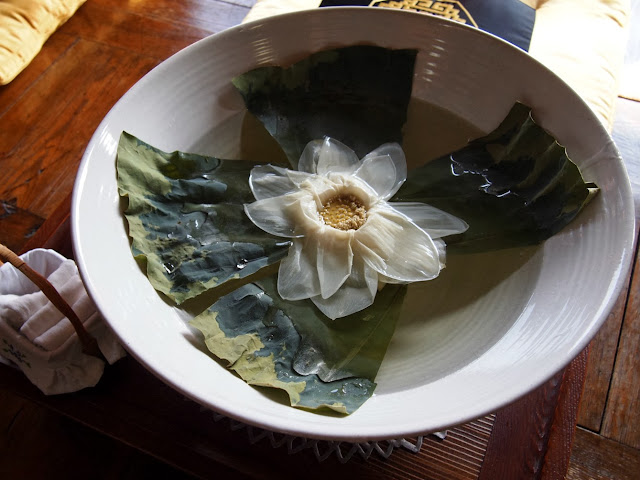 My afternoon at Hakindang House was lovely but far too short.  I wasn’t even close to being ready to leave after having such a unique experience and a fantastic meal.  Still, I took comfort in the fact that I could always go back.  And, because of the Seo’s jong-ga roots, I can expect to find the food, the traditions, and the hospitality exactly as I experienced them on that day.  In a country where change is constant, this makes the Hakindang House is a truly special place indeed.

The Hakindang House is in the process of developing the experience above as a regular tour for visitors. Until then, it will continue to function as a guesthouse and offers cultural programs including tea ceremony and pansori music lessons.