What to Do, See and Eat at Gangnam Station

By Mimsie Ladner on Wednesday, October 19, 2016
The Gangnam Station area (yes, that Gangnam) stretches from the subway station of the same name to the northern end of Sinnonhyeon Station and is a place where Korea’s education, youth and corporate cultures converge simultaneously.

Its electric streets really come alive at night, when businessmen and career women descend from the modern office buildings that tower high above the commerce district, which is home to the headquarters of Samsung Electronics.

At the same time, uniformed high school students weave in and out of alleys, where the city’s major concentration of cram schools keep zombie-faced teenagers locked within their walls until the late hours of the night reviewing practice questions for suneung, a standardized test required by Korean universities.

As a transportation hub, the neighborhood—particularly the main strip—remains constantly abuzz with commuters, only verifying the fact that Gangnam Station might just be the epicenter of the rat race that is Seoul.

Although Gangnam makes it clear that Koreans work hard, it is just as obvious that they play hard, too.

Chock full of entertainment venues ranging from hofs (Korean bars) to some of the city’s biggest dance clubs, it’s a place where hard-working college students and corporate suits go to let off a bit of steam, or to go hunting, a Konglish term meaning to pick up men or women.

Gangnam Station is a great spot to experience Korean nightlife, but also offers some interesting things to see and do before the sun goes down. Explore them all by following the guide below.

A Glimpse into Future Korea

Arriving at Gangnam Station can be a bit of an overwhelming experience, to say the least, due to its sheer size. But for shoppers, it can be a trip highlight. Here, hundreds of tiny clothing, accessory, cosmetics and telecommunication shops are conveniently lined up one after the other, making it easy for shoppers to compare prices and quality before making a purchase.

Additionally, the Sinbundang Line Underground Shopping Center, which is attached to Gangnam Station, boasts an endless number of low- to mid-priced clothing stores and coffee shops, making it a nice alternative to other shopping districts in less-than-favorable weather.

Attached to the station is Samsung d’light, a museum of sorts that takes its name from “digital” and “light,” and aims to be a “guiding light to the digital world,” all the while functioning as a beacon to lead consumers to an entirely new way of life made possible by digital technology. But rather than simply showcasing how its products convey its vision, Samsung lets visitors experience how its devices and solutions are molding our future through a series of immersive activities.

Visitors embark on a digital journey to the future on the first floor, where they use a chip-enabled bracelet to participate in an interactive experience to determine their digital personalities. Upstairs, guests explore the homes, classrooms and cafes of the future. 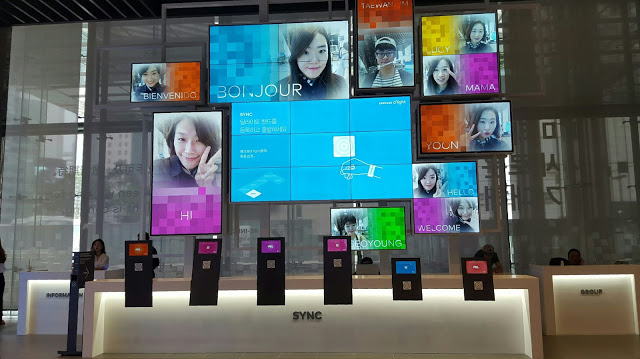 Through augmented reality, visitors can get a glimpse at how the Internet of Things communicates between smart devices like the refrigerator, the television and even the bathroom mirror, to make life more convenient and connected. The d’light shop in the basement is a one-stop shop for all of Samsung’s latest electronic gadgets.

But Samsung isn’t the only one exploring the digital frontier. In fact, as soon as you make your way to the thick of Gangnam Station along the main street, you’ll soon notice towering media poles that create a futuristic vibe.

The poles are said to be some of the most advanced digital signage systems in the world and were installed by the Seoul government in hopes to make Gangnam a sort of digital testing lab. The signs function as wifi hot spots and enable passersby to take pictures, play games, search for traffic information and get detailed map information. Go on, touch the future!

High Kicks and Ovens That Are Brick

While Gangnam most certainly exudes a futuristic air, touches of tradition can be experienced here as well. Kukkiwon, although a bit of a walk from the station, is one place to see this cultural side. Originally founded to be a center of Taekwondo, Korea’s national sport, it is now the venue of the World Taekwondo Championships, as well as other various national competitions.

For those looking to add some “kick” to their Gangnam tour, Kukkiwon operates the Taekwondo Experience Program to allow tourists and international visitors to experience Taekwondo. The program is held three times a day from Tuesday to Sunday and introduces basic Taekwondo techniques such as self-defense and breaking.

For lunch, fill your belly with the mouthwatering pizzas of Brick Oven New York Pizzeria. Owned and operated by James Yu, a culinary enthusiast who spent years in New York mastering the art of the city’s signature dish, the restaurant has tossed, baked and served up some of the tastiest pizzas in Seoul over the past few years. Although on the pricier side, the ingredients used at BONY are of the highest quality, while the crust is thin, but strong and comes out the oven perfectly golden.

The menu varies from classic pepperoni to The Godfather—a fantastic concoction of homemade Italian sausage, ground beef, pepperoni, and BONY’s special Diavlo sauce that would make any mobster drool. Can’t decide on which of the pizzeria’s signature pies to order? Pick the half-and-half option to try two and don’t pass up the crispy Garlic Romano fries which are served with a side of ranch.

After lunch, continue along Gangnam’s main strip to marvel at some of the neighborhood’s stunning modern architecture. Standing over central Gangnam like a giant cheese grater, Urban Hive is one of the more memorable buildings south of the Han River. Having been erected one floor at a time and entirely from concrete rather than with interior columns or a steel-framed foundation, the building set a new precedent for skyscraper construction in Korea.

The architect, Kim In-chul, also placed much emphasis on the human element when planning the Urban Hive. Included in his award-winning design are a rooftop garden and 3,371 window-like holes that each offer a unique view of the cityscape. Although there’s not much for tourists to do inside, it’s worth stopping by to marvel at its structure.

While pet cafes are becoming increasingly more common throughout the city, no one quite compares to Puppy Spoon. As it name suggests, this dog cafe is full of adorable pups that are eager to cuddle with the cafe’s patrons.

What makes this place different than the rest is the fact that the dogs are incredibly talented and can perform a series of tricks. In fact, when there are at least 10 people in attendance, the dogs hold a show in which they spin, shake and even skateboard. Yes, skateboard!

Although things never seem to slow down in Gangnam, Polaris Spa is a hidden slice of serenity, particularly for couples. The staff has taken great care to ensure that every detail—from the tea candles that spell out “I LOVE YOU” to the gorgeous city views—creates the perfect environment for a romantic and memorable date.

The couple program consists of a foot soak, jacuzzi bath with wine and cheese, back massage, brief nap and paraffin hand treatment. Throughout the duration of the program, couples are encouraged to participate in fun games and write sweet messages to each other to fully get the intended romantic effect, at least one that is quintessentially Korean. Bonus points if you and your partner wear matching undies.

Embrace your inner Rastafarian at Rainbow Hookah Bar, a basement bar that instantly transports visitors to the Caribbean. A colorful, cozy and borderline trippy setup of low tables and cushion seating creates the ideal atmosphere for live music on the weekends.

The place is at once relaxing and energetic, and the menu, which features a variety of cocktails and super-sized bucket drinks (meant to shared) demonstrates that this is a place to get the party started. The hookah options are just as varied, with flavors such as cardamom and rose.

Grab a bite at Oktoberfest, Korea’s first German-style brewery pub which was established long before the craft beer trend took over the city a few years back. In addition to serving hearty entrees of German fare such as sausages and pork knuckle, Oktoberfest makes its own beer and has four varieties on the menu, each of which is served up with warm breadsticks that are ridiculously addicting. To complete the German vibe, waitresses are dressed as German bier frauleins.

Keep your night going by exploring the soju tents and hofs that dot the streets of the Gangnam Station area. Or, if you’re in the mood for dancing, grab a spot in line at Club Mass, the premier electronic house music club in Seoul. As the city’s only club to be open 365 days a year, it is the go-to spot for twenty- and thirty-somethings looking to party the night (and morning) away, on any day of the week.

Two levels are filled with multiple performance stages, dance floors orchestrated by world-class DJs and a VIP lounge, which is available for group bookings.

Although considerably more sterile than Seoul’s northern districts, Gangnam is the place to experience the hubbub of the city and to get a glimpse of where the rest of Korea might just be headed in the very near future.

To Get There: Take the Seoul subway to Gangnam Station (Line 2).

While the above information was accurate at the time of publishing, always be sure to double check for updated addresses, prices and business hours.

Words by Mimsie Ladner of Seoul Searching. Photos credited to the source. Content may not be reproduced unless authorized.