By Mimsie Ladner on Wednesday, November 30, 2016
Nicky Kim is a Korean-Brit freelance writer based in Seoul. In addition to having been featured in various publications and tbs eFM, Nicky shares her own observations about Korean culture on her blog Neon But More. Ranging from issues such tiger parenting to youth culture to diet trends, her posts are as diverse as the country itself.

She’s also a fan of exploring the city she now calls home and after a recent girls’ night out, she is sharing some of her new favorite cocktail spots with Seoul Searching readers. Check out her guest post below.

Each district of Seoul has its own characteristic nightlife. Hongdae is young, creative, and lively; Itaewon is free and fun; and Gangnam is all about high-end class and style.

But even Gangnam’s neighborhoods were not created equal. Cheongdam-dong—the most expensive and extravagant of them all—is home to the hottest bars where celebrities, socialites and heirs to corporate titans come out to play. After all, its nickname is Asia’s Champ-Elysees.

Recently, my friend and I boozed at three of Cheongdam’s swankiest and most lustrous locations to see if it was all worth the hype.

Right in the center of Cheongdam, Kuanxi sky lounge bar is a gorgeous hang out for Gangnam locals.

As it’s on the tenth floor, it was quite difficult to find. In fact, there are no signs at all, apart from a small valet parking tent near the entrance of the building marked “Kuanxi.” It was cold and we had nearly lost hope, but eventually found our way thanks to our GPS and a helpful passerby. 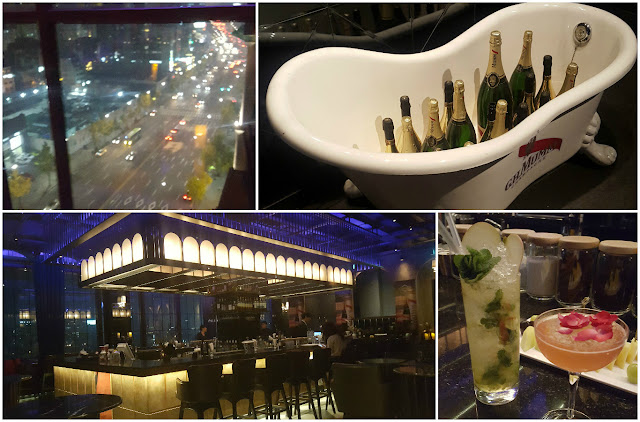 As soon as you step in, this place screams luxury. The high ceiling and tall windows allow you to admire the Gangnam skyline, and the decor is very modern. The long bar in the center glows, while the comfy sofas and low tables around the windows are quite dimly lit. As I walked around, I realized that it’s surprisingly large with two floors.

Chill pop and electropop music played at a medium volume so you could talk easily, but it still had a fun energy. It seemed like a great place for parties.

All the staff were men dressed sharply in suits. They all seemed deliberately friendly and flirty, and would often come over to chat. They checked up on us often and seemed nice.

The Apple Mojito (Apple Bacardi, apple syrup, lime juice, mint; ₩20,000) seemed to be the most Instagrammed, so we gave it a shot and weren’t disappointed! It was delicious with a distinct sweet apple flavor, and perfect if you don’t like the bitter aftertaste of alcohol.

I’ve never tasted rose in alcoholic form, so I was surprised to try the Rosequartz (₩20,000)—rose vodka liqueur, rose syrup, grapefruit syrup, lime juice and peach liqueur, decorated with real pink rose petals! It was so delicious and genuinely tasted like the scent of a rose. It was served in an adorable mini martini glass and I recommend it to people who like sweet drinks. The ultimate girly and beautiful drink!

Our second destination was also very difficult to find. Not only did we have to walk up a hill, but Twelve ended up being located on an empty street. Finally we found a door with a small golden ‘XII.’ I learned Roman numerals at school, but my friend had never seen them in her life, as they don’t teach Latin in Korea. I can imagine a lot of people would have a hard time finding this place.

The door leads to a flight of stairs and upon descending them, we found nothing. It was only when I approached the brown wall did it suddenly slide open. This place was so hard to find. We think it was done deliberately to keep it exclusive, but, boy oh boy, the trek is worth it! 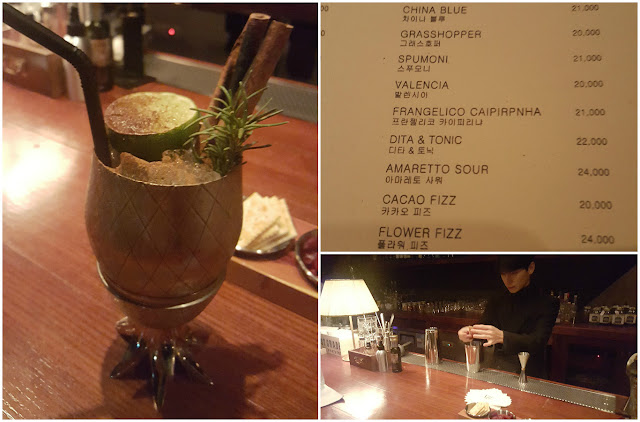 The aesthetic at this bar is breathtaking! The wall slid open to reveal a cozy lounge bar with a wooden and golden interior, leather sofas and a crackling fireplace. It was like stepping into a speakeasy movie set. Every single piece of furniture and cutlery had been carefully picked to create a wonderful, classic theme.

The music ranged from vintage French to acoustic. Overall it was slow, relaxing and brooding. The music was also played at a very low volume, making Twelve a great place to chat without having to shout. Because it’s so laid back and quiet, Twelve would be a great location for a first date.

The staff wore smart black clothes and every party seemed to have their own bartender. They were very elegant and spoke in gently hushed tones. We chatted with a bilingual bartender who explained that the bar is called Twelve because there are twelve seats at the bar. When the seat is occupied, the Roman numeral above the seat lights up! She also told us that Twelve is a franchise with mini versions in Haebangchon and Gyeongridan.

Before we tasted the Frangelico (hazelnut liqueur, absinthe soaked lime, rosemary, cinnamon; ₩21,000), we took a few minutes to admire its look and smell. It was served in an exotic metal pineapple with crushed ice and real cinnamon sticks.

The bartender lit the absinthe on the lime so for a split second the glass lit up with a blue flame. The initial flavor is very sweet and earthy. We thought we tasted chocolate, but learned it was actually the cinnamon and hazelnut. The aftertaste has a sour lime zing, so it was actually quite refreshing.

Here’s something that you need to know about me. My favorite spirit is gin, and I am a stereotypical tea-loving Brit with an Earl Grey tea obsession. When I had my first sip of the Earl Grey Sour (homemade 8 hour Earl Grey tea infused gin, whipped egg white, lemon juice, syrup; ₩22,000), I went nuts.

It had such a deep and authentic herby Earl Grey scent and flavor, while the egg white made it creamy and smooth. I learned that the owner studied the recipe in Hong Kong and brewed the gin himself. Both our drinks seemed to be perfect for the autumn season, and put me in a lovely, Christmassy mood.

I saved the best for last! I heard that Y1975 is the biggest and most well-known lounge bar in Cheongdam, and I now understand why. As we left the quiet side of Cheongdam, we could hear the booming bass and revving of cars as we approached Y1975. This bar is by far the largest of the three, and has a glamorous exterior with white walls and neon lights. 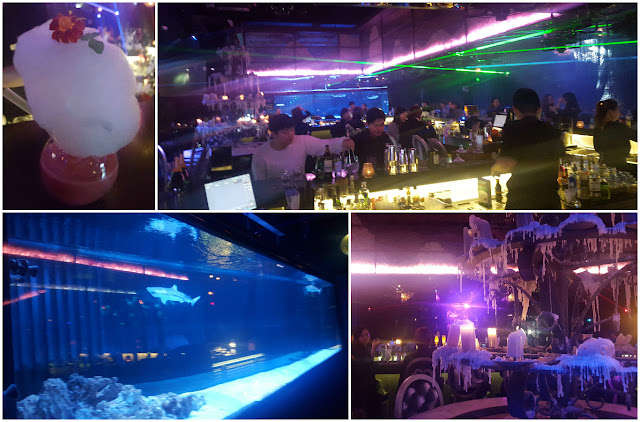 As soon as the doors open, we were greeted by a massive blue tank with three baby sharks swimming around. Yes, real sharks! I had never seen baby sharks so close up, and it definitely made a good first impression.

There was so much for my eyes to take in. Above the bar, confetti whizzed around in glass boxes and there was a huge melted candle chandelier. Despite the extravagant decor, everyone seemed to be wearing casual clothes, so the atmosphere still felt quite laid back.

The music alone made Y1975 seem more like a club than a bar. Everything from pop and dance to house music was played at an ear-splitting volume. This place seemed to be a great spot to get our drink on and dance, but forget trying to make yourself heard. By the time we left, the floor was slightly vibrating because of the music. I have no idea how the sharks can bear this every day.

The bar staff were very busy. Service was fast and slightly impersonal. It’s definitely not a place to chat with the bartender. We tried to ask one of them what was in the drinks, but none of them seemed to have a moment to talk.

Can you go wrong with Sangria (₩20,000)?This fruity red wine is refreshing and stronger than it looks. It was the simplest drink we tried during the night, and not very spectacular.

The frozen Strawberry Pina Colada (₩20,000) was fresh and delicious, and tasted more like a smoothie than a cocktail. A huge, pink wisp of grape-flavoured cotton candy rested on the top of the globe glass. It was a fantastic novelty drink that grabbed everyone’s attention.

Whatever you’re looking to have a quiet evening with a date or a wild night out with the girls, Cheongdam has something for everyone. Just be ready to empty our your wallet.

Words and photos by Nicky Kim of Neon But More for Seoul Searching. Content may not be reproduced unless authorized.