The Terrifying Tale of the Cheonggyechon Tomb Bridge

But Joe McPherson, creator of popular food blog ZenKimchi, has invested much of his time – years, in fact – into unearthing the more sinister stories of the city’s dark past.

He tells these captivating tales on his Dark Side of Seoul Tour, a captivating walk through the historic neighborhoods of South Korea’s capital. The tour is jam-packed with narratives that are equally scary and fascinating, and have yet to make the pages of guidebooks and travel brochures.

In the spirit of Halloween, he shares with Seoul Searching readers the story of The Tomb Bridge. 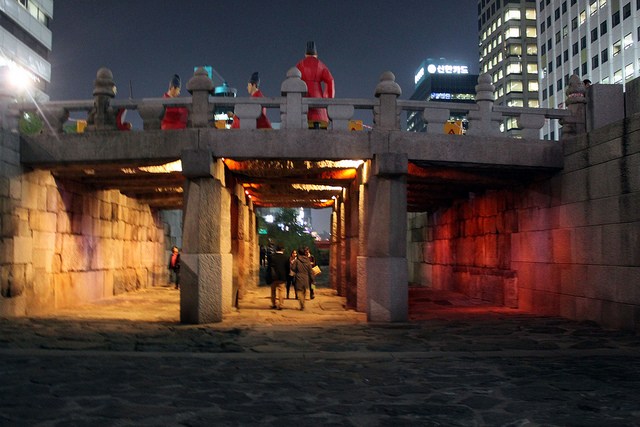 Ever walked along the Cheonggyechon with your lover?

Then perhaps you will enjoy this little love story about the founder of the Joseon Dynasty, Yi Seong-gye, and his second queen, Sindeok.

Back then, the king had two queens: a queen from Jeonju – the Jeonju Queen – and a queen from Seoul – the Seoul Queen. Sindeok was the latter. She and the king were very much in love.

However, there were a handful individuals who were not so fond of her, including the sons of the Jeonju Queen. Their disdain for her was the result of Sindeok promoting her own sons to be ahead of them in line for the throne.

One day, Queen Sindeok suddenly became ill and not long after passed away. The king was so heartbroken that he built an elaborate tomb for her on the palace grounds, not far from the site where the British embassy stands today. This was highly unusual for the time.

The king was so horrified that he abdicated the throne and gave it to the oldest heir of the Jeonju Queen. The fifth son, who was the ambitious and crafty one, somehow convinced his older brother to let him have the throne.

After he took over the throne, a flood hit Seoul, washing out Gwangtonggyo Bridge on the Cheonggyecheon Stream. The king hated Queen Sindeok so much that one of his first acts as the new ruler was to dismantle her tomb and use the stones, placed upside-down (indicating serious blasphemy), to rebuild the bridge so that people would forever walk on top of her grave. 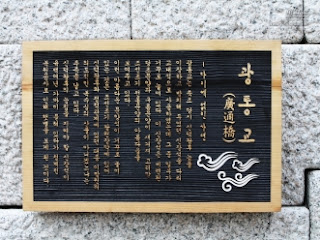 In 2004, the bridge was moved to its current location, about 70 meters east of the original site, as it was decided it was not able to accommodate today’s foot traffic.

To this day, tourists, couples and families walk over it without ever knowing its grim history.

There are, in fact, two plaques located at the site that tell the story, but describe Sindeok as a concubine rather than a queen. Nevertheless, these often go unread, like many of Seoul’s historic sites.

For more interesting stories about the darker side of Korean history, click here. Also, be sure to reserve a spot on the Dark Side of Seoul, which runs on Tuesdays, Thursdays, Fridays, Saturdays, and Sundays at 8pm in October.

Story submitted to Seoul Searching by Joe McPherson. Content may not be reproduced unless authorized.