By Mimsie Ladner on Tuesday, June 7, 2011
When thinking of ways to best describe Korea, multicultural isn’t exactly the first adjective one conjures up.

In fact, Korea has always been known to be a homogeneous society whose citizens take great pride in their seemingly pure ethnic roots. In doing research previous to my arrival in Korea, I found that many foreigners had complaints of racism that they had experienced while living here; such rants identified the nation as a xenophobic one. Perhaps older generations may have been hesitant of foreigners living in their homeland in previous times (and who can blame them after being colonized by the Mongol invasions and Japanese colonization), but I have yet to experience what these former expats had described on the internet.

Though I haven’t exactly felt as if I fit in as one of their own, I have been greeted and treated as a very welcomed guest with utmost hospitality since my arrival in the Land of the Morning Calm. While Koreans may come off as a bit cold at first (especially on the subway), they are truly wonderful people once you enter their Confucian bubble.

The number of foreigners living in Korea seems to be increasing on a daily basis; 2.2% of the nation’s population is non-Korean, most of whom are migrant workers. This may seem like a small number compared to other melting pot nations, but it’s significantly bigger than it was just a few years ago.

It’s no wonder, though, that these foreign minorities tend to band together, as they share a common culture, language and historical background. Living in Seoul has given me wonderful opportunities to learn about other cultures and I’ve so enjoyed exploring the various ethnic enclaves of the city.

Hyehwa, or Daehangro, is located near Seoul’s city center and is often described as the theater district of the city. While it is frequented by college students, hipsters, jazz musicians and street performers, it is also the area in which Filipino residents congregate on the weekends, mainly because there is a rather large Catholic church near the rotary that has services in Tagalog on Sunday afternoons. After mass, attendants flock to the small but welcoming market just around the corner. 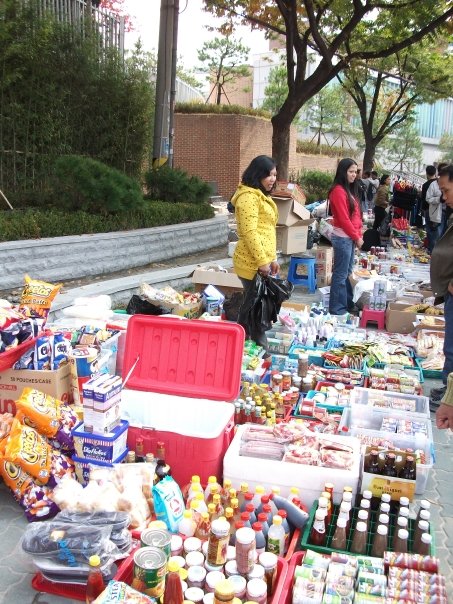 Though small in size, the Filipino Sunday Market in Daehangro offers a variety of goodies.
Wares at the market include a bit of everything from okra to phone cards to wind up toys. A lot of the food products are imports and items that you can’t easily find in Korea. Yet, my favorite aspect of the market is the food.

Vendors set up tables and cook all of the Filipino specialties. I’d be lying if I said I could list all the names of the cuisine available, but I can say with certainty that everything I’ve tried is delicious. For around 5,000 won (less that $5), one can get a tray of rice and his or her choice of main dishes. I almost always grab a cold bottle of San Miguel to accompany my meal and fried bananas on a stick for dessert before grabbing a seat at shared tables, where strangers gather around and chat over a tasty lunch.

Communal dining between strangers is not common in Korean culture so it’s a nice chance to meet different people and hear their stories about their lives in the Philippines. At one point, I made visiting the market a weekly tradition and developed a mother-daughter relationship with one specific vendor. She would get quite excited to see me, then hand-feed me her latest specialty, like the empanadas which she took great pride in. 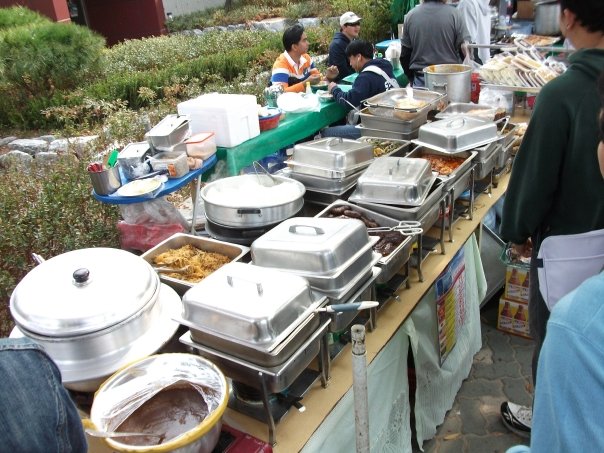 Food vendors sell a variety of mouthwatering Filipino foods, like the classic adobo. 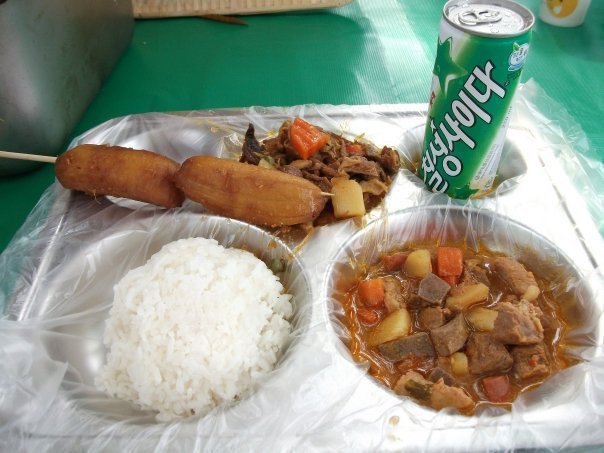 The lunch sets are cheap, delicious, and served up at common tables on the streets of Hyewah just a few blocks outside Exit 1.
In the southern part of the city, near the glitz of Gangnam, lies Seorae Village, an upscale neighborhood in which the majority of Korea’s French population lives.

The district is home to the city’s only French international school, which explains why most of the French families live in the area. Dotted along the main street are impressive French restaurants (crepes, quiche, and baguettes… oh my!), brilliant boutiques and ritzy wine bars. Oh, and did I mention the bakeries? Ooh la la!

French flags hang next to the taeguki and many road names in the area are of French origin. There’s even Montmartre Park, a small but nice green space for soaking up some sun while enjoying your take out coffee from one of the nearby cafes. The people watching is especially great (when in Petite France, do as the French do) and hearing those around you chattering away in French makes you feel as if you are in Paris… well, almost anyway. 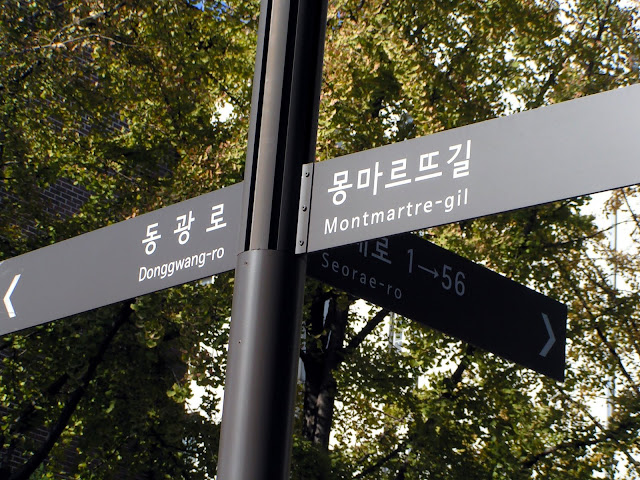 Montmartre-gil (street) won’t necessarily lead you to Sacre-Coeur but it may guide you to a nice Bordeaux. (Photo credit: Aelle)
Across the river reside a large population of Indian and Russian immigrants.

Alleys of genuine Indian restaurants (no Korean fusion here!) can be found near Dongdaemun Station. (Don’t miss Everest just outside of Exit 3!)

Not far away, at Dongdaemun History and Culture Park is what has been nicknamed Little Russia. With signage made up of Cyrillic script, it can be a bit difficult to tell what the businesses are from the outside, but in a way, it makes exploring the area a lot more fun.

I recently wandered past a slew of Russian karaoke bars into a small market and had the granny shop keeper trying to converse with me in Russian all the while pushing traditional desserts at me to sample. Markets like this one sell Russian food, but it seems that vodka is the best seller, as it is in the neighborhood’s Russian restaurants, as well.

I had never tried Russian food before my arrival in Korea but now, I’m hooked. The food is best enjoyed with company so I was happy to be invited to share a table with a Russian family on my last visit. A random Saturday afternoon turned into an evening of borsch, kebabs and vodka shots. Oh, how I love the unpredictability of this city. 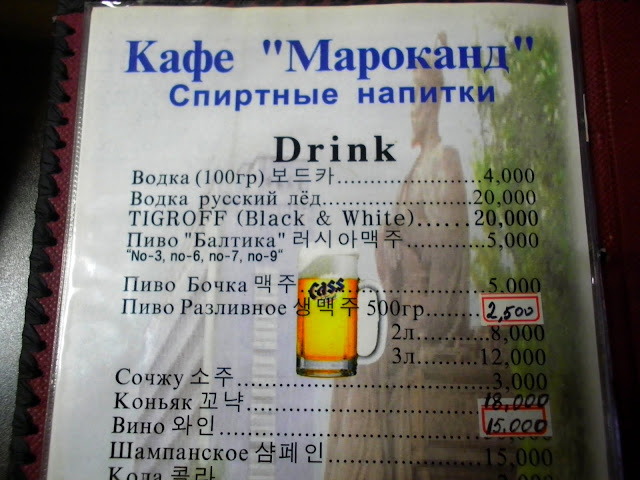 While there may not be much English on the drink menu at the restaurants in Little Russia, you can assume that vodka will be at the top of the list, as it is here. 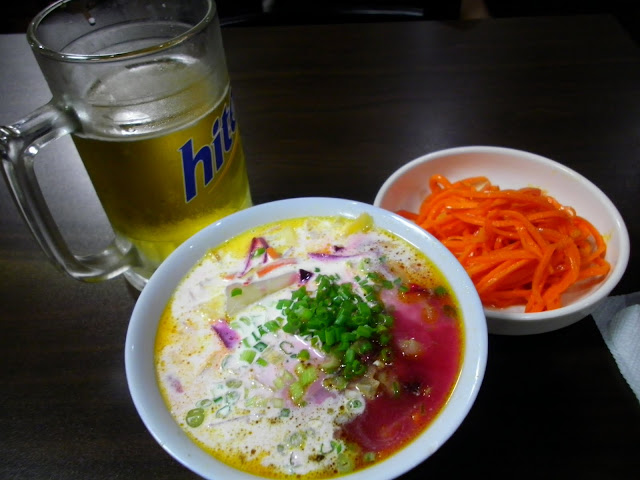 I refused to try anything other than borsch as my first Russian meal. I was pleased to say the least.

These small enclaves provide for an experience of individual nations, but the multicultural headquarters of Korea is, without a doubt, Itaewon.

Seoul’s own mixing pot of a neighborhood is home to expats of multiple nations; walk from one side of the main strip to the other and you’ll pass more foreigners than Koreans and hear more languages than you can count.

I once considered Itaewon to be the armpit of Seoul for the longest time, but I’ve finally started to appreciate it for what it is, despite it’s unkempt appearance and over-abundance of rowdy American soldiers prowling the infamous “hooker hill.”

Itaewon is also a treasure trove of ethnic restaurants and cultural landmarks.

Seoul’s only mosque is located in the neighborhood, which attracts those of Arab, Indian, Pakistani, and Turkish backgrounds. Whereas The Wolfhound, a genuine Irish bar, has become one of my go-tos, as there’s plenty of Guinness and traditional Irish food to be had there. Other favorites are Copacabana Brazilian steakhouse, an all-the-meat-you-can-eat gem, La Bocca, the perfect place for a genuine Italian panini, and Santorini, which features Greek cuisine.

Other foods found in Itaewon include French, Bulgarian, German, Indian, Chinese, Mexican, American, Japanese, and Italian, just to name a few. Some love the place, others can’t stand it, but I don’t think anyone can argue with the fact that it is the definition of multiculturalism in Seoul. 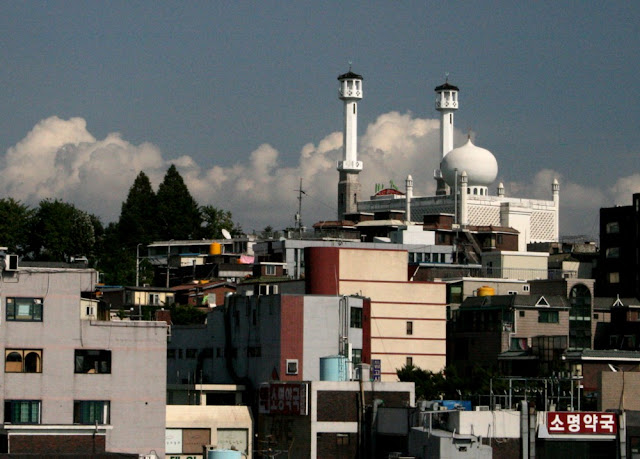 The Seoul Central Mosque is symbolic of the multiculturalism of Itaewon. (Photo credit: Wikipedia)

As Korea continues to become a big player in global affairs, its international community will no doubt expand.

The ethnic enclaves of Seoul, no matter their size, will provide the comforts of home to those who settle or visit here and give the opportunity for curious people like myself to get a taste of what those cultures are like.