In 2008, Seoul was the second biggest city in the world with a population of 23,800,000 people. Despite it’s size, it’s crime rate is extremely low, thus being one of the safest places to travel. For one, no one is allowed to own a gun. Most police do not carry guns, or so I have been informed, and those that do carry the equivalent of a BB gun. When the rare crime does occur, serious measures are taken to ensure justice. It is the norm to see children walking the streets during the later hours of the evening, snacking at food stands or goofing off at a playground, unaccompanied by an adult. I’ve spent quite a few evenings walking throughout my neighborhood and have not once felt anything to be unsafe.

There is one neighborhood, however, that is extremely dangerous. Especially after receiving a paycheck. Meyongdong. Though Seoul is known for its numerous shopping districts, this one takes the cake. Street after street is lined with well known stores from Louis Vuitton to Chanel to stalls selling handbags and shoes for dirt cheap. Carts of knock off goods like those found in the dodgy basements of Chinatown in New York are displayed in the middle of the street here. It seems that Korea doesn’t give a damn about copyright laws. Food vendors are everywhere and the aromas of Belgium waffles and potato tornadoes seem to lead every unsuspecting boy and girl from one fabulously fashionable street to the next. 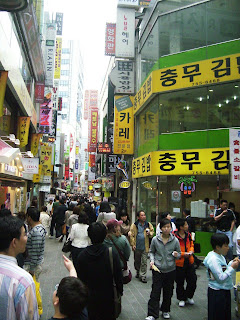 Luckily, I was able to avoid the crowds of the evening, as Meyongdong shopping continues until 5am. 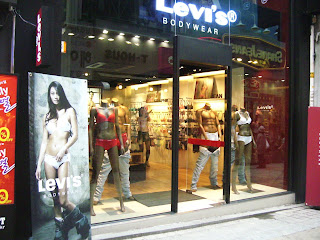 As conservative as Korea is, I was somewhat surprised to see this “pants down” floorset at Levi’s. 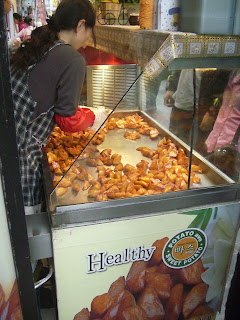 I don’t know what is with Koreans and their sweet potatoes.

I felt very out of place in my jeans alongside girls sporting four inch heels and the very latest trends, including graphic shirts with English seriously lacking good translations. It’s no doubt that those who wear them have no idea what they say. I’m going to get a pictures of these said shirts very soon. I felt even more unfashionable standing next to the many guys shopping. I have never in my life seen a population of people that are so well dressed, with New York and Rome both considered. Many guys here look like gay cartoon characters, which is Korea’s perception of what a handsome man is. I will admit, they are pretty: girl jeans ironed, nails manicured, and man purse in tow. Keep in mind, though, that they are not gay. Really. I will save this for a later blog. 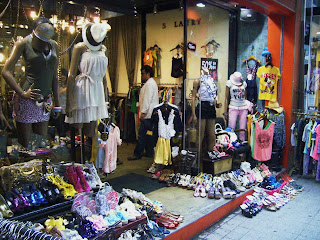 Every girl’s dream… except when you have a 9.5 sized foot in a country of 6 sized feet.

Needless to say, I found one bargain after the next, taking note of the styles of those shopping around me. My favorite steals were a $4 floral skirt, a $10 dress/belt set, and multiple pairs of $1 earrings. I also enjoyed my hour spent in the three-story Forever 21. And my delicious chicken galbi fried rice. Though the streets and stores were more crowded than Macy’s in NYC on Christmas Eve (seriously), I was in pure bliss. So much so that I literally walked around this neighborhood for five hours, before I dragged myself away. There’s always next paycheck… 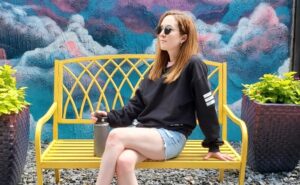