In the past, I’ve heard people say many things about how to know a country’s culture. One of these said ways is to play their sport (“Dhani Tackles the Globe“). For anyone who knows me, they would say that this would be a joke for me, as I do not have an athletic bone in my body. Still, I am a huge fan of attending sports games, so I tagged along to a baseball game this past weekend. And let me just say- don’t mess with Korean baseball fans.

While we were purchasing our tickets for the game, I noticed the numerous stands at the gates selling food. On closer inspection, I noticed these were no hotdog and popcorn vendors, but rather sellers of dried squid, seaweed, and other interesting gourmet stadium treats. I figured I’d better settle for Burger King this time around. Walking in to find our tickets, I found that people were bringing in boxes of fried chicken and six packs of beer. I find it refreshing that spectators are allowed to bring in small ice chests, not to mention their own alcohol and food. I guess not everything here is about making a buck. 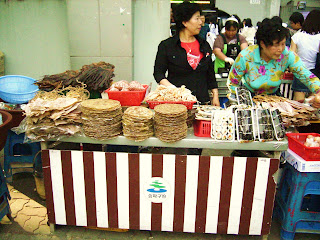 While the only consecutive six seats available were in the outfield (seats are general admission), we were still able to have a good view of all the action. Immediately, I felt that I was in an American football game, as the energy and chanting was to the max. We had decided to cheer for the Hanwha Eagles (Eagles…to the top!) and were welcomed by fans waving huge flags, drumming, and screaming “Geta A Homeruna!” [Koreans attach an ‘a’ sound to the end of most English words.] It was comical, but we joined in, knocking our lightning sticks. We watched as cheerleaders continued to lead the crowds in cheers throughout the game. 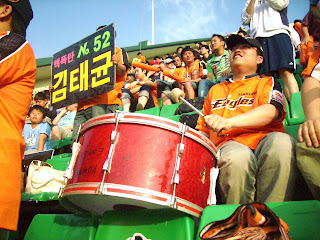 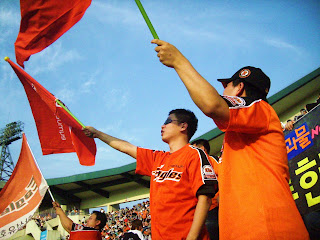 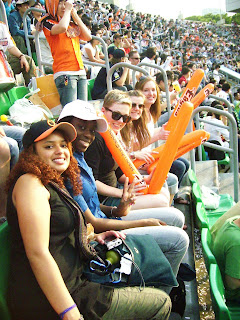 At one point in the game, a player hit the ball over the fence, and it headed straight to us. Thinking we were dunzo, we started to freak out (which all the men thought was quite hilairious, no doubt) but a man sitting next to us whipped out his glove and caught the ball. His kids were so proud the rest of the game… it was quite cute. 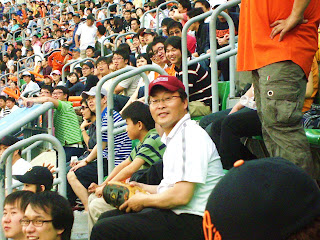 The man sitting next to us who caught the ball… everyone in the background is watching the great re-play on the screen.

One thing that I found interesting is that many of the players were so young. As their stats were displayed on the screen, I saw that many of them were born after 1985. Perhaps I am accustomed to seeing older players on American teams, but it took me by surprise.

Overall, it was a fantastic day of baseball and further exploring the culture of these great people. 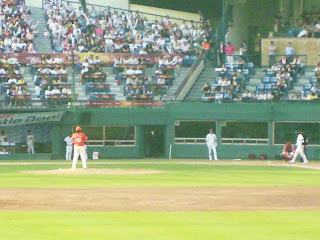