By Mimsie Ladner on Monday, November 23, 2009
Growing up, I heard horror story after horror story from my mother about her teaching profession and all the problems that went along with it. Overall, I think she cherished her experiences as a teacher, but there were some things that came with the job that would make even the sanest person a bit mad. Every once in a while, I would spend an afternoon in her classroom and was able to witness first hand the fighting, nagging, whining, and complaining she endured on a daily basis. I swore that I would NEVER, ever become a teacher. As fate would have it, teaching is now my primary occupation.

You May Also Like: Generate QR Code for Google Review

Though I have no teaching experience in the US, I have right to believe that teaching Korean children is not at all like teaching Americans. For the most part, Koreans are honest, reasonable, and respectful students, most likely a result of the ideals and values placed on them by both their nation and family. That, in addition to, the wonderful game of “rock, paper, scissors.”

Never do I ever have students fight over who gets to erase the board, or go first in a game. While two Western female students might fight over the seat farthest from the nearest boy, it doesn’t happen here. This is all a result of the popular hand game that is no doubt the universal and ultimate decider in Korea. Whenever a minor dispute arises amongst two or more people, it is automatically assumed that these said people should play a game of 가외 바위 보, or “kai, bai, bo.” “Kai” means scissors, “bai” is rock, and “bo” is cloth, a slight variation of the westernized game. Despite the small difference, the rules of the game are the same, and the result is final. The game ultimately decides a winner and settles any dispute; when I say any, I mean it.

I have seen people of all ages play this game throughout the entirety of my stay in Seoul. I once witnessed a group of young guys at a restaurant play to decide who would get to eat the last piece of barbecued meat off the grill. Another time, I saw the game played between two girls on a bus over the last vacant seat. The most memorable game I came across- not to mention the cutest- was in the subway. A middle aged couple was sitting on the seats and their child, about 3 years old, was in a stroller in front of them trying with great effort to get out. After a few attempts to pacify the child, the child was reluctant to stop his attempts. The dad eventually gave in to a game of kai, bai, bo. The kid won, and because one cannot argue the outcome of the game, the dad took his son out of the stroller and set him on his lap. Needless to say, the kid looked pretty proud of himself. 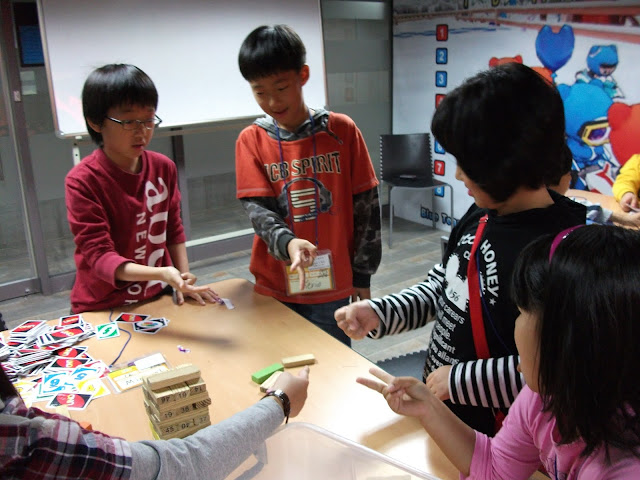 My students play “kai, bai, bo” in game room class to see who will pull out the first Jenga block.
I was surprised by how many people play this game, but I recently learned that it was probably invented in Asia, most likely Japan or China, about two thousand years ago. Since then, it has spread across borders, but seems to have become especially influential in Korea. It’s no wonder that arguments are so easily settled in Korea. Or that the crime rate is close to zilch. Maybe it’s just a coincidence, but doesn’t most person-on-person crime usually result from an escalating, unsettled disagreement?
I asked a Korean friend if she had ever used the game in resolving disputes. She told me that once she and a few of her friends had gone to a bar and all had an eye for the same guy. Partly as a joke, they played the game. Sure enough, the winner of the game had the right to approach him without any interference from her friends. Sure, this may seem a bit crazy, but think about all the cat fights a little game of rock, paper, scissors could solve in Girl World! Not to mention, it would surely save teachers from consuming excessive amounts of Tylenol…or soju cocktails, for that matter.
0
Previous Post
Next Post