By Mimsie Ladner on Friday, January 22, 2010
Since I’ve been in Korea, I’ve managed to keep up with celebrity gossip. I don’t intentionally seek out such news, but since my arrival in Seoul, I’ve watched Leno and Letterman on a daily basis, thus making it hard to keep my celebrity obsession at bay. During one of my lunch breaks recently, I was chowing down on some Special K while watching Access Hollywood. They showed a picture of three-year-old Suri Cruise sporting high heels walking around with her mom, Katie Holmes. Apparently there has been controversy surrounding the issue that she’s being dressed beyond her age. People have been vocal about the subject in polls and on message boards, but I can’t help but wonder what they would think about the situation in Korea that seems to have been going on for quite some time.

This week, we’ve had a slew of kids attending our winter camp. Two of them stand out in my mind particularly, neither of which I actually taught. They’re simply so memorable because of their appearance. These two 5th/6th grade girls approached me to say hello and although their orangey-hued hair stuck out, I was taken aback even moreso by their blue eyes. If you have never seen an Asian with bright blues eyes and orange hair, it’s creepy. And completely unnatural looking. So much so that you can’t help but stare like you were looking at some oddity of an creature at a circus. On closer inspection, it appeared as though they had already had the cosmetic eye surgery so many Koreans get upon high school graduation. I’ve previously mentioned the importance of appearance in Korea (up to 70% of Korean women in their 20s and 30s have had plastic surgery), but to me, this is crossing the line; though it’s an extreme case, it’s not uncommon to see children with an altered physical appearance.

I’ve found it to be commonplace to walk down the street, peer into one of the numerous “hair shops” of Seoul, only to see a seated, draped child with foil in his or her hair. It’s popular for young children to have their hair dyed; it seems the most recent trend is to have a solid chunk of hair highlighted an orange-brown or dirty blonde hue. Note, though, that 20 years or so ago, it was illegal for anyone in Korea to be on television with dyed hair. It has been explained to me by my Korean friends that most people in older generations feel that it is rude, or bad manners, to have dyed hair of any unnatural color. Which, for all Asians, is anything other than black. Still, it doesn’t seem to stop younger generations, or their mothers in this case, from doing so.
Still, by far, it is much more common to see young boys with altered hair colors and styles than girls. The perm, a look popularized by Gu Jun Pyo, a hunky character on a Korean drama, is the hottest kiddy look these days. Watch any commercial (like this precious Baskin Robbins ad) or spot any printed advertisement; if there is a young boy in the ad, he will almost always have a perm. I do feel that mothers changing their young children’s appearances sends a bad message, but I have to admit that the little boy perm is freaking adorable. Seriously. 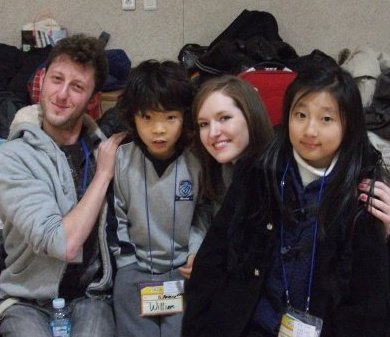 Aaron, a fellow teacher, and I with two of our favorite students. Note the cute little boy’s amazing perm.

It does seem, however, that Korea is not the only country that has an obsession with this trend. Chris Rock’s recent documentary, Good Hair, follows African American women and highlights their obsession with having good hair, no matter the price. The documentary also exhibits the controversy over the kiddy perm. It seems that it’s just as common in America as it is here in Korea, though some are taking a stand against it. I had to giggle a bit when I came across NappyKitchen.com, a blog that uses “humor to encourage [African American] moms to embrace their daughter’s wonderfully nappy, napptural, natural hair.” I guess even the most bizarre cultural phenomenons, such as the kiddy perm, can cross borders.

Yet, let me assure you, my friends, that such “dolling up” doesn’t stop at the human level. In Korea, they are just as obsessed with dressing up and beautifying their pets. Yes, appearance is that important. Due to the small apartments in which most Koreans live, their choice of house pets is basically limited to small dogs, which they often treat as family members. Small businesses that specialize in dog clothing and grooming have no doubt banked on this obsession. Walk down any busy street in Seoul and you will be sure to find an assortment of doggie costumes, hats, and shoes… yes, shoes. Still, I had seen this before my big move to Asia, so with the exception of the popularity of it all, it seemed pretty normal. One thing I had not seen, however, was the oddity of doggie hair dye. The most fashionable doggies have both their ears and their tail dyed. It seems that the season’s hottest colors include neon orange and fluorescent green. Think I’m kidding? 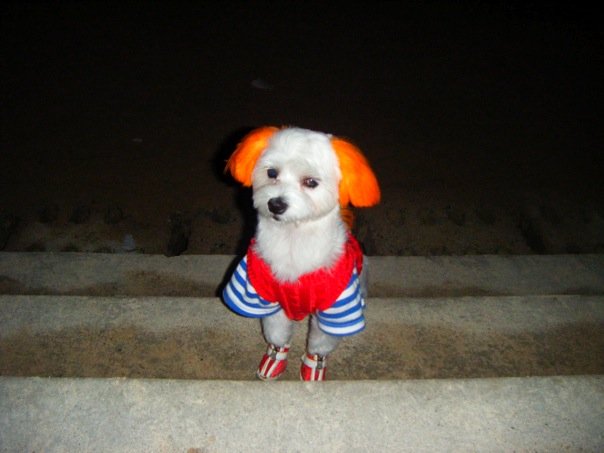 This is my Korean friend, Saemi’s, pet dog, Arong. It is a bit odd, but kinda cute at the same time, right?

I never cease to be amazed at the lengths these people go through to look good. Some experts predict that Seoul will soon rank among Milan, Paris, and New York as a fashion capital of the world. I can’t help but wonder if kids and pets will help sway the votes….
1
Previous Post
Next Post