The Art of Ice Fishing

By Mimsie Ladner on Wednesday, January 27, 2010
Of the many things I’ve been learning during my time here in Korea, adaptability ranks at the top. I’ve adapted quite well to many things, with the weather being one of them. I had been told by many that Korean winters are harsh and unbearable and that I would no doubt be cooped up in my apartment throughout the duration of the coldest days of December-February. I dreaded the season, especially considering the fact that I’ve grown up with humid, mild winters in Mississippi. I cannot say that this adaptation was easy- the first couple weeks were brutal, in fact. Still, it didn’t take long for me to get used to the frosty chill, or to embrace it even. Soon, after learning how to properly layer, I found myself growing fond of the cold weather, especially with the first snowfall, which immediately brought a bit of excitement into my life.

The snow also does wonders for making the most ordinary scenes look like a postcard. And I certainly proved the theory about my staying cooped up wrong; I spend just as much time out of my apartment as I did before the cold came in. So, when my friend Aaron stated a desire to go ice-fishing, I agreed we shouldn’t pass up such an unusual opportunity.

A Korean friend agreed to tag along and took care of our transportation planning. 7AM came early on a Sunday, but we made it to the train station just in time to take a nice, scenic ride through the snow-covered Korean countryside. The small homes and open fields were a welcomed sight as we ventured out of Seoul. After a two hour train ride, a quick transfer, and another hour and a half on a bus, we made our way to Hwacheon, just a few kilometers south of the DMZ (where South Korea borders North Korea). It didn’t take us long to locate the grounds of the Hwacheon Ice Fishing festival, as we followed the surprisingly large crowds. I was taken back by the sheer size of the festival grounds, in addition to the thousands of people covering the area.
As we got closer, I couldn’t help but laugh at what I was seeing. Crowds of people were standing over holes of ice, flicking poles that closely resembled fly swatters, in zombie-like states. It was all very bizarre. We were disappointed to be turned away from the ice; they had reached a maximum limit of participants. So, we decided to grab a bite to eat, and kept our hopes high that we would get to try again later. We soon learned that this ice fishing festival was so much more that what it’s name implied. There were what can only be described as fields of ice, stretching over large areas, set up for various purposes: ice skating, sledding, ice soccer, snow tubing, and even ice bumper cars. There were areas promoting credit cards and soju brands and endless tents of food, glorious food.
Well, it smelled glorious, anyway. We took a seat in a tent where our token Korean ordered us a plate of fish. The plate of small, grilled fish, with their mouths open in scary grimaces, would have scared me away eight months previous to the day. Since then, I’ve eaten everything from chicken anus to live octopus, so this looked quite appetizing. That is, until we opened them with our chopsticks to find hundreds of eggs and very little meat. We tried again by ordering a bigger grilled fish, which fortunately was very tasty. We concluded our meal with some odd bird-like creature grilled and served with a side of salt for dipping. After this experience, we were able to finally register for a ticket to get on the ice. 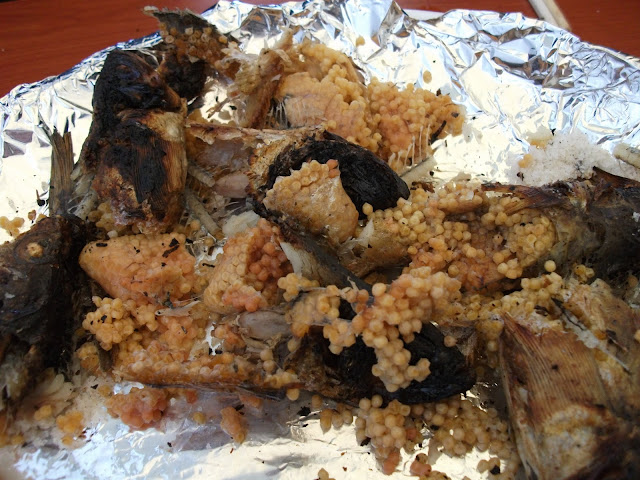 Our egg-filled fish lunch. None of us had the stomach for this.
I was surprised we found a few holes in the ice that were all in close proximity to one another, as there were so many people. It seems that this festival, since its founding in 2003, has brought in over six million people from all over Asia, all of whom have high hopes for catching the famous Sancheoneo, the native freshwater trout. We were told that these fish were constantly released into the frozen lake throughout the day, so we tried to be optimistic about catching one. We waited… and waited… and waited, flicking our wrists, wondering if our technique would bring in a big one. It was cold and a bit awkward, but we stayed entertained by the group of college kids next to us having competitions to see who could hold their hands in the water the longest. One guy had the balls to have his friend time how long he could stick his head in the water. Yes, I admit this was ballsy, but as ballsy as the people in the “hands on” area of the festival. Some, who must have been slightly insane, took the challenge of jumping in the water and attempting to catch the fish by hand. 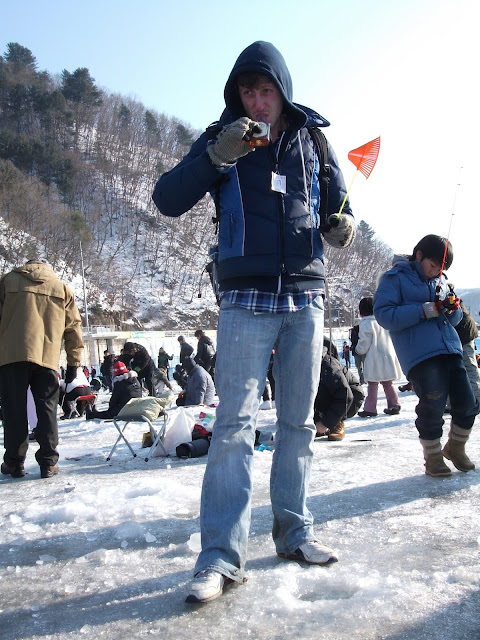 What would ice fishing be without pocket whiskey to keep ya warm? 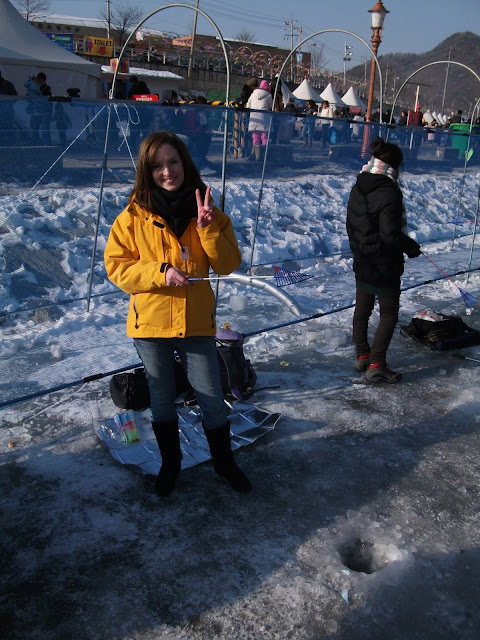 Apparently I was not born to fish. 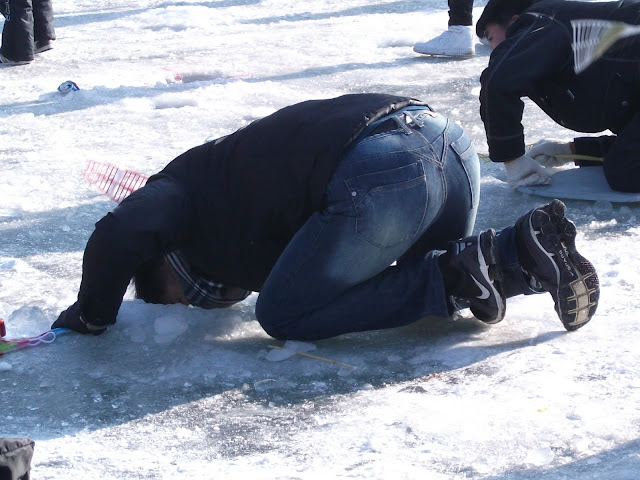 Some people took the ice fishing very seriously, like this guy keeping an eye out for one to snag.

Just as we started doubting that fish were in fact being released into the water, an older woman, clad in high heels and texting on her “hand pone” (as they say in Konglish) next to us pulled up a nice sized trout. Upon closer inspection, I noticed that the hook was not in the fish’s mouth, but rather in its side. As more people around us began reel fish out of the holes, I saw that all of these fish were caught by being snagged. It was the most bizarre thing. The three of us were pretty quiet, and slightly pissed that we weren’t bringing in anything.

The old ajhussi near us must have sensed our sadness, as he brought us a gift- his most recent catch. This raised our spirits and we soon became determined to catch at least one. With the sun beginning to set, the air growing colder, and Aaron’s line broken by what must have been a really big one, we tried and tried. I almost caught one as I caught sight of it in the crystal clear water, but almost was not good enough (I think it may have been dead). The kind old man brought us another one- a bigger one- and we decided this was enough for dinner.

We located a tent where a man scaled and wrapped our fish in foil. We found a BBQ grill and cooked our dinner out in the clean, brisk air next to the frozen lake. It felt a bit surreal, but it was the highlight of the day. As the sun finally went down for the evening, thousands of multi-colored fish-shaped lanterns lit up as far as the eye could see. These lanterns are apparently made by the small town’s grandparents throughout the year and this year, Hwacheon attempted to set a Guinness World record. The fish were good, the atmosphere was inviting, and the families and friends that surrounded us were happy. It was one of those really cool moments that makes sitting out in the cold really worth it. 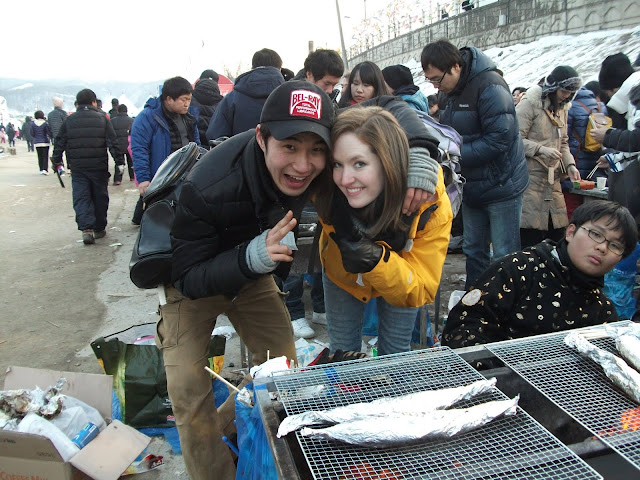 Hyun-su and I grilling our catch- well, sort of our catch- on the DIY BBQ pits.
We found a great little restaurant for a second dinner. I suppose it was because we were in the country, but we got more stares that usual. Children looked at us surprisingly and people went out of their way to please us. A table of young guys next to us were celebrating a birthday and offered us a plate of cake. After a round of sake at a nearby bar, we decided we needed a place to stay for the evening, and the waiter personally walked us to a nearby minbak, where we turned in for the evening. There’s nothing like the hospitality of people from the country. It kind of made me miss home a little.

We made our way back to Seoul the next morning, still full from the night before, not needing to eat any more fish for a while. I did have high hopes of catching something, as I’ve never managed to catch a single fish EVER in my life, but I suppose catch or no catch, it was a great experience, one not to be forgotten. No doubt I’ll be returning to Hwacheon, as I hear they have a pretty crazy tomato-throwing festival in the summer. Oh, Korea.

And to further witness my ice fishing experience, check out the short video below…
7
Previous Post
Next Post