You ever have that dream…

…where you’re walking naked down the street, and everyone just stares?

In America, the whole being in front of a crowd in your underwear- or even naked- situation would definitely rank in the nightmare classification of dreams. In Korea, however, public nakedness is not only a reality, it’s a lifestyle. Jimjilbangs, or public bath houses, can be found virtually on every block of the vibrant city of Seoul, most of which open 24/7. Though they are most often visited on weekends by families wishing to spend quality time together, they are frequented daily by anyone needing to wind down and relax. Considering Koreans are some of the hardest working people I’ve ever encountered, this would be the majority of them. Jimjilbangs are such a big part of Korean culture that there’s even a popular television talk show that takes place entirely in the sauna.

For the past ten months, I’ve been saying repeatedly that I’ve wanted to get to one of these quintessentially Korean establishments, but I was always scared to go by myself, as I was unaware of the proper procedure of the whole thing, as there is a certain process necessitated on a visit. On the other hand, I didn’t want to go with a close friend, as it’s in my cultural makeup to be modest and I would no doubt feel uncomfortable in my birthday suit with a co-worker.

This past week, I was finally talked in to going by a Korean boy and figured this would be the easiest way to work myself into the process. When we arrived, we paid our 6,000won (about $5) admission and were given locker keys, towels, and hospital scrub-like pajamas. Mine were an attractive salmon and his grey, as males and females are segregated, thus needing different colored attire. After being given the step-by-step instructions, I made my way to the female section of the sauna, put my things away in my locker, changed into my PJs and met Hyun-su on the co-ed floor of the jimjilbang. The co-ed area is the main part of the jimjilbang and features everything from a station where you can use the computer to a mini restaurant to sleeping quarters where you can actually stay overnight. 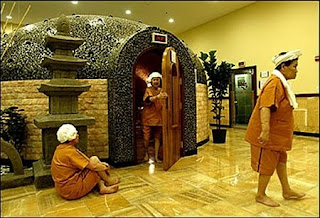 We headed to the first sauna in which we laid down on straw mats over heated pebbles. It made me feel as if I were at home on the hottest of summer days, but it was relaxing at the same time. Afterwards, we tried out two additional saunas whose interior makeup varied from coal to mud. The third could be described as igloo-shaped industrial sized oven, as the heat was so unbearable I could only last a hot 3 minutes before my skin felt as if it was burning off. I dipped out early and headed to the ice room, which cooled me down fast. After chilling out, we grabbed a seat on the heated floor in front of the big screen playing a Korean drama with a handful of other Koreans. We quickly devoured some jimjilbang essentials: salted hard boiled eggs and shikhye, a refreshing iced rice drink with a hint of sweetness. As odd of a combination as it seemed, it cooled us down instantly and proved to be damn delicious. 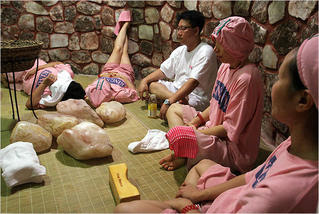 People taking the heat inside the saunas. 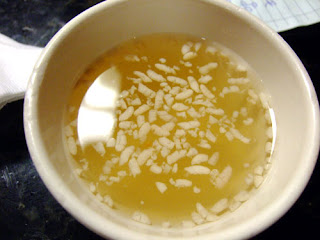 Shikhye, a traditional Korean rice drink, is served on ice in large tupperware canisters in the jimjilbang.

I couldn’t pass up the massage chairs before heading to the sex-segregated shower area. Having to strip down was hands down the most uncomfortable part but once I realized I wasn’t being stared at as much as I had expected, I warmed up to the whole embracing nature concept. It’s required that you take a shower before entering the public tubs, each of which a different temperature ranging from cold to hot-as-hell. It was extremely relaxing, but I found it easiest to avoid eye contact with anyone around me. I tried to look straight ahead, but I couldn’t help but notice the old women clad in bras and panties offering the most famous Korean method of skin exfoliation in which one lies naked on a flat platform and is scrubbed vigorously until they turn various shades of red. As strange as it sounds, I’ve heard it does wonders for your skin. Other jimjilbang services include haircuts and massages. Or, you can do as most Koreans do and scrub down your best friend for the free in the vanity area near the tubs. 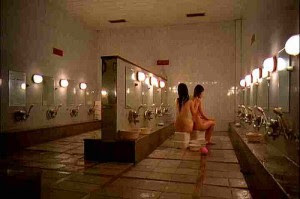 Friendly scrub downs are common in the gender-segregated bathing areas of the jimjilbang.

Overall, it was not as awkward or as uncomfortable as I had expected. Sure, it was a bit unnatural socializing with complete strangers in my birthday suit, but it was one of the more invigorating experiences I’ve had since I’ve been in Korea and yet another opportunity to embrace the country’s unique culture. Jimjilbang will surely be a new weekly tradition; now, if only I could master the Princess Laya hair towel fashion that people of all ages love to sport, I could really fit in.

**Note: I wouldn’t dare take out a camera in a jimjilbang; therefore, all of the images on this post have been retrieved from Google Images.