In life, there are some things that simply cannot be expressed in words. Thankfully, today’s technology gives us the resources to go beyond using simple prose to communicate. Skype, for instance, allows real-time video messaging with friends and loved ones at the click of a button from anywhere in the world. Such an invention has no doubt allowed me to keep from getting too homesick while living across the world. New technology has also actually allowed for the creation of a new language. Jargon like “Tag me!” or “I totally defriended him.” carries certain significance that has no application outside of social networking websites, yet this language is used quite often and is easily understood by all.

Another language that has developed since the introduction of cell phones and text messaging is that of emoticons. Seeing as tone is almost impossible to detect through a written message, smileys let the sender add a certain human element to the otherwise robotic communication. When I first arrived in Korea and started using a cell phone, I found myself often confused by the indecipherable symbols contained in the texts my Korean friends were sending me. I soon learned that Korea had their own emoticons, quite different than the ones I was used to sending stateside. In fact, Koreans use emoticons more often than your typical American and there are even emoticon menus, stocked with hundreds of smileys, built into message settings to let the sender extend to the receiver his or her most accurate feelings.

As if understanding Korean isn’t difficult enough, I still find myself trying to decode certain emoticons I receive. Unfortunately, there’s not an emoticon dictionary installed in my phone to allow for easy translation. Sometimes I just guess what the mean. Nevertheless, I have been able to correctly learn a few. Below are a list of said emoticons, which are the most commonly used amongst Koreans…

^^ This is probably the most common emoticon and is the Korean equivalent to 🙂 It is a basic smile and represents happy eyes. They also draw smiley faces using these eyes. Variations of this emoticon include: (^_^) and ^_^

^o^ This emoticon represents a laughing face. It may be accompanied by…

ㅋㅋㅋ The “ㅋㅋㅋ“character makes a similar sound to the English “K” so Koreans may sometime change the emoticon to KKK. I assure you not to worry friends; Koreans are in no way associated with the klan. It’s actually supposed to convey the “kuh-kuh-kuh” sound one makes when making a throaty laugh. I’ve also seen “ㅎㅎㅎ ” (H-H-H) or “하하하” (HA-HA-HA). All of these, if you haven’t caught on, express laughter.

ㅠ.ㅠ Also, ㅜ.ㅜ or ㅜㅜ, are supposed to take the form of crying eyes. I guess the double arm/tears coming from the eyes convey more sadness than the single arm.

o.O This symbol reminds me of old hag with a crazy eye, but it actually conveys surprise or shock.

Finally, what would couple obsessed Korea be without love smileys like this one (>^_^)> <(^_^<) (2 hugging emoticons) or ^3^ (kissing)? Still, my favorite is the emoiticon with the “V for victory” fingers, the Korean go-to pose for taking pictures: v(^_^)v As I said, certain things can’t always be expressed in words. This is especially true when you are living in a country that doesn’t speak your language. In this case, emoticons are a handy communication tool. AND… you won’t find yourself embarrassed;;; messing up the pronunciation. ^.~ 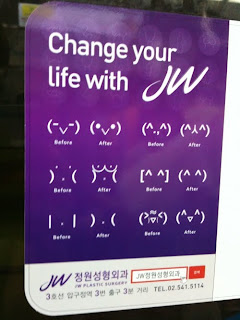 In an effort to set themselves a part from the many other facilities, this Seoul plastic surgery center got creative using ’emoticons’ in their adverts. Before and after shots advertise services available including eyelid surgery, rhinoplasty, and brow lift. (Photo credit: http://blameitonthevoices.com)
3
Previous Post
Next Post