Over the past few weekends, I’ve done a lot of fun things here in Seoul with great friends. These range from a fun night of cosmic bowling to a girl’s night bar hopping in Itaewon to seeing my idol, Taylor Swift, in concert. I’m not sure why, but although I’ve been doing such things, I’ve felt very strange lately, particularly toward Korea. Almost two years ago, it seemed as if adventure was constantly running through my veins. I was comfortably lost in an unfamiliar, strange land. There was something new and exciting waiting for me at every corner I turned and the element of surprise was at its greatest each day.

While I am still enjoying my life here, the excitement has died down- seemingly overnight- and things suddenly feel normal. Perhaps this is why it all suddenly feels strange. I can read restaurant menus, know the best cobbler to repair my broken heels, take transportation shortcuts, and I have a network of friends all around the city. I’m not upset by this in the least… I’ve just finally crossed the bridge where the unusual has become mundane. I’ve fully assimilated to the culture. As normal as Seoul feels to me now, there are some things that remind me that I’m still not in Kansas (er… Mississippi) anymore. I am tempted to call these things weird, but that would be quite ethnocentric of me. Therefore, I give you a small list I’ve compiled of some noticeable differences between the USA and Korea I’ve observed over my time here.

1. No “right” way: Whether walking down a flight of stairs or meandering down the sidewalk, I’ve had plenty of those awkward encounters coming face-to-face with a fellow pedestrian, having to stop, and choosing which side to pass them on, all the while they are doing the same thing. Usually when this happens in the States, the individual almost always chooses right, but in Korea this is not the case. When I first arrived it seemed that people stayed to the left but after a while I realized my observations were just coincidental. In heavily trafficked areas, like in the subways during rush hour, things become a big tangled mess because no one stays to one side. Last year, Korea tried to implement a “stay to the right” campaign to discourage foreigners’ perceptions that Korean people are rude. “Stay right” stickers, written in Korean, of course, are even posted on staircases. People don’t seem to be catching on, however, so things remain as they had before the campaign… chaotic, to say the least. 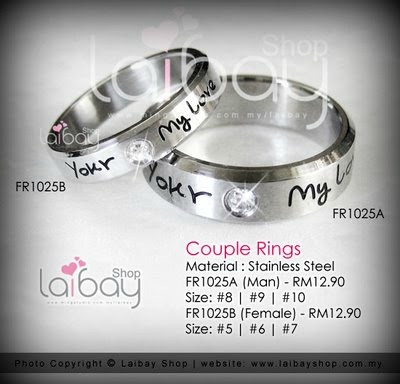 2. Couple rings: In America, it has been a trend recently for young men seriously in love to present their young girlfriends with promise rings, jewelry given as a gift with the promise for future marriage attached. Note that these rings do not come with a proposal for marriage, but are simply pre-engagement rings. I think promise rings are somewhat ridiculous, but to each his own. In Korea, rings are similarly involved but without any promises. Young women often expect their boyfriends to agree to exchanging couple rings, usually on their 100 day anniversary, a monumental date in Korean relationships (though I think moreso for girls than guys). There’s even a market for such rings and jewelry companies advertise with slogans like “Is it time for couple?”. What’s odd, though, is that when the actual marriage engagement happens, rings usually aren’t involved. There are exceptions, but it’s safe to say that the hype and demands made by American women for the perfect diamond ring ceases to exist here. Even after marriage, there are many couples who do not even wear wedding rings. If a man tried that one in the States, he’d be doing some serious time in the doghouse.

3. Advertising: I’ve mentioned it in posts before, but I’d guess that half or more of advertising in Korea features celebrities. I guess those tactics work since they are utilized so often. But, what I have yet to mention is how things are advertised outside the media, such as to lure passerbys into stores or to promote candidates for elections. I could go on and on about what I’ve seen but I’ll mention the most memorable cases. I was once walking down the street and glanced up at a Hi Mart, a multi-story electronics store. Just outside the entrance were young girls dressed in skimpy school uniforms dancing seductively to blaring music. A week later at the same store, a man in stilts dressed as a clown was juggling. Mascots of every shape, size, and creature parade around busy areas like Gangnam and Myeongdong advertising products from beer to restaurants. I found these tactics to be strangely surreal at first; nowadays, it’s just another normal occurrence that I see on a regular basis. 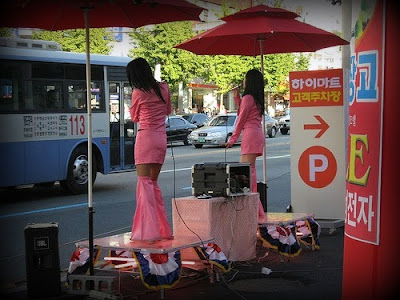 Blaring music seems to be used in most storefronts from cell phone shops to cosmetics stores, whether or not the store is actually open. In addition to the loud music, trucks can also been seen and heard passing through the streets, announcing a candidate in district or city elections. These trucks are also usually adored with bright lights. I guess in a city where one’s senses are constantly overloaded, advertisers have to use that much more volume to make an effect.

4. 귀엽다! (Cute!) Everything in this place is cute. From karaoke rooms furnished with teddy bear decor to detailed emoticons, Koreans love cuteness. There are even certain faces that girls make in pictures to exude an adorableness factor. These faces are achieved by puffing out the cheeks and squinting the eyes or holding up the hands in a surprised gesture. Girls also flirt by talking like a baby and guys eat it up. Yes, boys love cute here, too. I’ll never forget a man who walked on the subway, decked out in a shiny business suit with a serious look on his face. His phone rang and when he pulled it out of his pocket, I saw that a Winnie the Pooh phone charm adorned his mobile. Yes, everything is really cute. 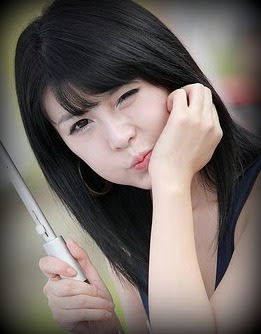 5. All Dolled Up: Koreans like cute but they love looking pretty. Cosmetic stores can be found on every block and it seems that individuals are usually pretty loyal to certain brands. This includes guys, too, and all these stores almost always carry men’s lines. Korean guys are quite intent on keeping their skin perfectly moisturized, making sure each piece of hair is properly in place, and their clothes match their shoes. I can appreciate this East-West difference, as American guys often ignore these details of their appearance, considering such aspects of grooming unmanly, thus looking unkempt and out-of-style.

Girls are often under a lot of societal pressure to look like dolls and as such they are constantly touching up their makeup. It’s not unusual to go into a public bathroom and find a line for the mirrors, not the toilets. From my social observations, it’s also acceptable to put on makeup, pick your teeth, and brush your hair in public. But, I still think the strangest of the cosmetic wonders I’ve witnessed is that of the pimple patch. Rather than walking around with a zit on display, some girls apply skin-colored stickers to cover the blemish. One isn’t so noticeable but I’ve seen as many as ten on a face, which often results in a somewhat paper mosaic appearance. Yet, this never seems to draw any unusual looks from passerbys.

6. A Love for Poo: Koreans love a lot of things, like pencil cases, photo stickers, and ramen noodles, but they also love poo. Yes, poo as in poo-poo, poop, crap. Call it what you will, but it is most referred to here as ddong and Koreans think it is cute, too. Not only do kids lovvvve to talk about it (as I guess American kids do, too) but various items are made in its image, usually as a swirly brown or sparkly gold mound. I’ve seen red-bean stuffed pastries made in the shape of ddong in Insadong along with keychains and stuffed toys sold in various locations. Yet, the most interesting aspect of poo culture is the ddongchim (roughly “poop needle”), the Korean equivalent of our wet willy, in which the ddongchimer (most often kids) clasps his or her hands together with pointer fingers out and sticks the dongchimee you know where. It’s is such a common occurrence that I’ve had to make a rule discouraging it in my class. 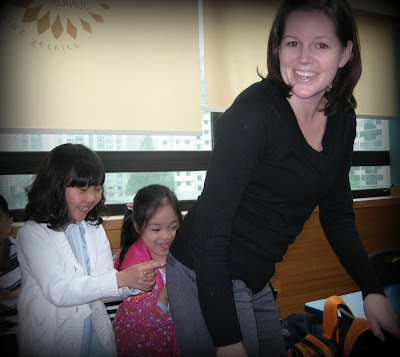 I do not look this happy when I am ddongchimed. (Photo: Google Images) 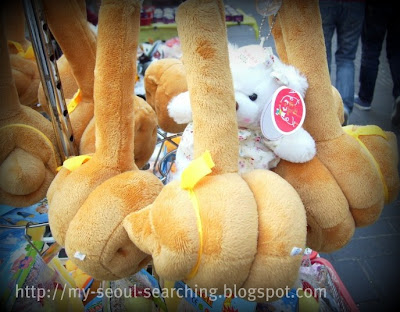 Ddong shaped stuffed toys on sale in Insadong. I’m guessing they’re used to hit people on the head, another thing Korean kids like to do.

As I said before, it would be wrong of me to call these things odd. They are, in fact, only different societal norms than those that I experienced growing up. Over the past two years, I’ve really grown to appreciate the differences in the two cultures. They are, in fact, what has made living abroad so much fun.