The House of Sharing

I had been putting it off for a while, so when I saw March’s visit advertised on the Korea4Expats website, I knew I couldn’t put it off anymore. With my time left in Korea getting shorter, I knew that it would be ignorant of me not to take advantage of the wonderful opportunity to visit the House of Sharing, both to see the halmoni while the remainder of them are still in good health and to educate myself on Korea’s darker past and on a human rights violation still prevalent in the world today.

So, I woke up early last Saturday to meet the group and board a bus to Gwangju, about an hour outside of Seoul. I was surprised to see such a large number of people- over 40- attending the tour. Upon our arrival, we were given an introduction to the House of Sharing by the international outreach team, composed of Koreans and foreigners alike. The House, as it is sometimes referred to, is both a human rights museum and a safe house for former “comfort women.” These women are survivors of sexual slavery who were kidnapped by or sold to the Japanese military during the Asia Pacific War in the 1930s and 40s.

After the introduction, we watched a documentary on Kang Deokgyung. Like many young women in Korea during the time, she was eager to make money to help her family during the rough economic era. She went to Japan to work for the Women’s Volunteer Labor Corp but had difficulty keeping up with the hard labor demands. During her attempt to escape, she was captured by the Japanese and brought to a comfort station where she was forced to sustain multiple rapes under terrible living conditions. After the war, she was finally able to make it back to Korea. She spent the remaining years of her life fighting for women’s rights. She was quite the activist, participating in public talks and even making trips to Japan to demand an apology from the government. On her deathbed, her main concern was if her lost passport had been found, as she was eager to make one last trip to Japan to make her story known.

After the documentary and a short lunch, we split up into groups and were led throughout the museum. Upon entering, there is a picture of the first woman to come out publicly about her experiences as a comfort woman and a quote which translates “We must record these things that have been forced upon us.” Though small in size, the museum provides for a profound experience telling these women’s stories. Most pictures and exhibits are explained in Korean but the team leaders did a great job explaining their meaning in English. 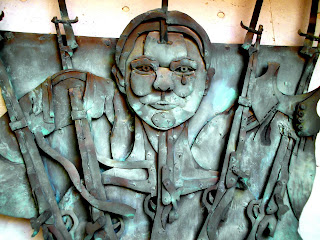 An iron sculpture depicts the Korean woman after taken to a comfort station. She is pierced with bayonets and has tears running down her face. This sculpture hangs opposite to one of the woman before her capture, sitting in harmony surrounded by dreams of children and peace.
One of the more memorable displays is a map of the locations of the comfort stations throughout Asia. It is estimated that over 200,000 women were forced into sexual slavery and about 80% of these women were Korean. It must be noted that these stations were set up by the Japanese military for purposes of controling STDS and protecting their own women (though many Japanese women were also forced into the stations). 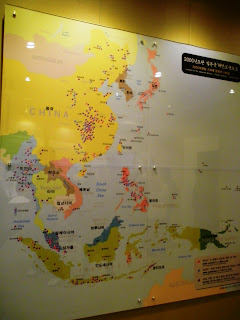 This dots on this map indicate the locations of the Japanese comfort stations throughout the Asian Pacific area.
When a woman was captured or lured into comfort stations thinking that they were going to be working as maids or in factories, she was given a medical examination to determine if she was a virgin or diseased. She was then raped by the medical examiner and sent to her station. Her identity was quickly stripped of her as she was given a Japanese flower name by the first person to rape her. The women’s names were written on wooden blocks and and hung up much like menus are at restaurants in Japan. If a woman was already in use by another soldier or she was sick, her block was turned over. If her block was face-up, she was “available for rape.” The price of a woman was determined by racial priority. Japanese women were the most expensive and women who looked Japanese or who had lighter skin followed. Soldiers were often given free coupons for use at comfort stations for good military service. A model room was on display for view at the museum; it really made me shudder to even think about how those young girls felt each time they heard the clanking of the soldiers’ boots on the wooden floor, headed toward their rooms. 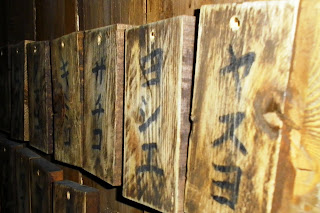 Wooden blocks display the comfort women’s Japanese names and indicate whether or not they are “available for rape.”
Young women (mostly in their teens) were raped by twenty to forty men per day; many of these women were subjected to these conditions for up to 7 years. Sometimes, they were given a single condom which had to be washed in between uses. Nevertheless, they often contracted venereal disease and were given injections of Mercury 606 as a cure; as a result, their internal organs were destroyed. Hysterectomies were necessary and many women died under the harsh physical conditions.

When the war ended, many of these women were stranded in the countries where they had been brought. They had no money and no knowledge of what home was like anymore. Over 70% of the women were killed before they could return to Korea, but even for those that were able to return, they were shunned by their family. Society identified these women as prostitutes rather than victims and little was done to help them. It wasn’t until 1991 that the first halmoni came out with her story and accusations against the Japanese government. Many followed suit, but the government identified these women as ill or as liars and accused them of making up stories. Two years later, Japan somewhat admitted to their involvement in the stations but failed to make any sort of apology and even to this day, has yet to do so. They base their reasoning behind all sorts of political and legislative bull crap.

Textbooks are also on display in the museum which exhibit the fact that most Koreans aren’t even educated on the issue of sexual slavery by the Japanese. Whether it’s to maintain positive relations with Japan, or if there is a bit of shame associated with issue, Korean textbooks contain only one sentence of the history of the comfort women. Pictures are also on display of the halmonis at their weekly protests at the Japanese embassy in Seoul. Rain or shine, sick or well, these women, now in their eighties and nineties, bring banners and sing songs demanding that the Japanese make an official apology, give monetary restitution, punish the war criminals (whose names are in fact on record), and teach their people about the tragic history so the mistake will not be made again.

In addition to the museum, there is a small gallery displaying pictures that the halmonis have created over the years after being instructed to paint as a means of psychological release. These works of art depict the emotions and thoughts of the former comfort women during their time at the comfort stations and have been displayed in galleries throughout the world. 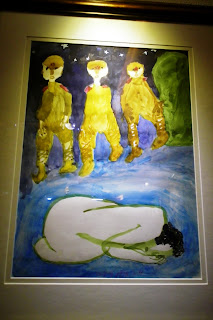 One of the halmoni’s paintings depicts how she felt after being placed in a comfort station.
After the tour, our group was engaged in a debriefing session in which we discussed the human rights violations at the time during the Japanese occupation and how the issues are still prevalent today. I will include what I learned in a future post but it’s safe to say that sometimes, despite the grim experiences of the past, we don’t always learn from the mistakes of others. Sexual slavery is still very prevalent in Korea and all over the world. 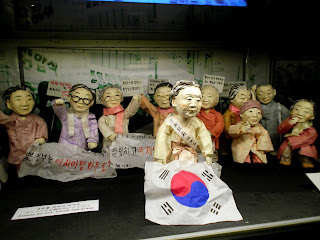 This hanji art depicts the weekly protest by the halmoni at the Japanese embassy in Seoul.
Today, some of the halmoni live together in the House of Sharing. Our day ended by visiting the women feeling well enough to come out and see visitors. They were nothing but smiles and were quite hospitable to have such a large group visiting their house. They don’t speak any English but the volunteers were more than happy to translate. I caught myself getting quite teary eyed thinking about what these women had to experience and the strength they’ve exhibited by staying active in the fight for justice. It was also touching to hear of one of the halmoni’s concern for the Japanese with the earthquake that had hit just a few days before. 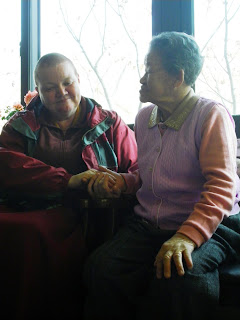 The final part of the tour was meeting the halmoni. We also somehow broke into a spontaneous sing-along to “You Are My Sunshine.” I’m pretty sure the halmoni appreciated it.
These days, it’s difficult to find living history and I feel so lucky to have been able to meet the incredible women residing at the House of Sharing. It was saddening to hear their tragic stories, but at the same time, I feel fortunate to have been exposed to an issue that wouldn’t have had such a profound effect on me if I had simply just read about it on the internet. It would be ignorant and wrong of me if I didn’t pass on what I learned at the museum and I’d strongly encourage anyone residing in Korea to take the opportunity to visit this inspiring museum. I can only hope that the halmoni have their demands met by the Japanese, if only so that they may leave this world feeling justified. But, if this is not the case, I pray that people can hear their stories and those that have the power to make a change do so that we don’t have to see similar institutions in the future.
1
Previous Post
Next Post