By Mimsie Ladner on Friday, April 22, 2011
I’ve really come to know and love Korean food. It took a while for me to acquire a taste for the distinct, bold flavors of Korean cuisine, but after two years of eating it, I now prefer it on any given day. Not only is it (generally) healthier as it’s packed with vegetables and nutrients but it also has far less preservatives and fat compared to what one would find in Western foods. Don’t get me wrong- there are plenty of fried foods easily attainable on the streets of Seoul and the red meat that’s so popular among nationals isn’t exactly fat-free, but those are the exceptions. Some Korean foods are borderline healthy, combining both flavor and nutrition; those are usually my go-tos.

It’s really hard to pick a favorite Korean food, but if I absolutely had to, it would be dalkgalbi. It was the first Korean food that I truly adored and I have since referred to it as Korean jambalaya when describing it to friends and family. Perhaps it was the fact that I found a food similar to one of my home that initiated my love interest with the dish, but even now I can’t help but to droll when I think about it.

While it’s name literally translates to chicken (dalk) meat around the ribs (galbi), the dish is much more than that.  Chicken is the main ingredient, but the combination of spices and vegetables really give it oomph. The dish is said to have originated in Chuncheon, a city about two hours east of Seoul. When I learned that the city is now connected to Seoul via the subway, I decided it would be a perfect day trip. Yes, I am totally the type of person who will travel two hours for good food.

After arriving at Chuncheon Station, I hopped in a taxi and headed to Myeongdong, a small replica of the neighborhood of the same name in Seoul. It’s heavily trafficked by fans of the uber famous Korean drama Winter Sonata, as the area was used as a filming location for the show. I was really shocked to see droves of Japanese tourists following their tour guides like packs of ducklings, as I hadn’t imagined Chuncheon to be a big tourist destination. But, that’s the power of the Korean wave for ya.

I quickly located Dalkgalbi Street and was again surprised by the lines of people waiting to get a table at one of the many restaurants there. It was already past lunch time and I worried that I wouldn’t be able to find a place that would serve me, as I was traveling solo for the day. Most of the establishments required two diners at minimum for each dish. Fortunately, I was shooed into a place that only had a few customers inside; I had my doubts that the food wouldn’t be good but I figured I’d give it a try. 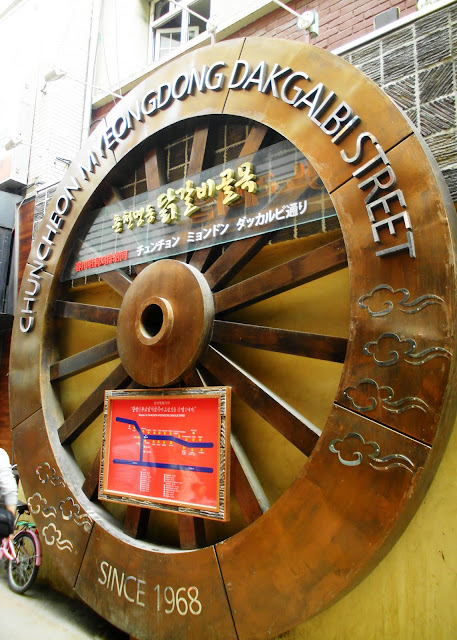 Dalkgalbi Street: a landmark of Chuncheon and one of the most aromatic alleys of Korea.
A plate of 300 grams of chicken breast marinated in deliciousness was promptly brought to my table along with all the fixins: chunks of sweet potatoes, chewy pressed rice cakes, cabbage, green onions, and lots of thick gochujang, Korean hot pepper paste. The waitress began to mix the ingredients on an oversized skillet that sat upon a gas range built into my table. As she cooked away, I enjoyed the freshly made varieties of kimchi. When the food was ready, I wasted no time in scooping generous spoonfuls onto lettuce leaves to make the typical Korean wrap. Despite the restaurant being empty- I think the other places were tourist traps anyway- the food was incredible. I inhaled both servings in pig-like fashion, thankful that no one else was there to watch me. 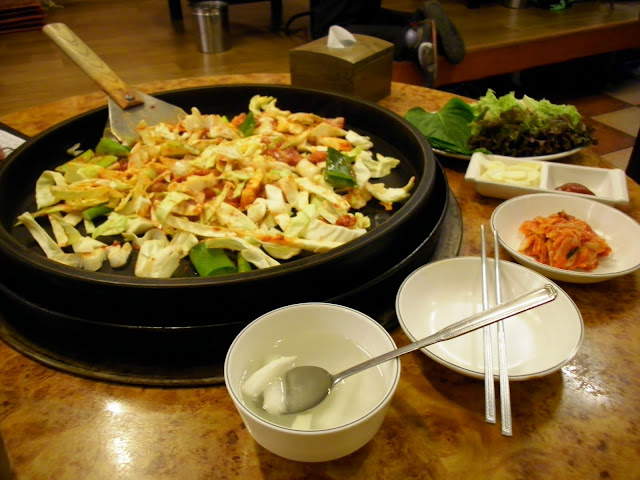 All the ingredients of dalkgalbi before being mixed together and cooked at the table.

Usually when I eat dalkgalbi with friends, we order rice to have it mixed in with the chicken toward the end of the meal, hence the jambalaya analogy. But, seeing as I had eaten 2 portions, I decided that ordering rice would be gluttonous of me. I paid my bill and decided some exercise was in order to work off those calories I had consumed. I hailed a cab and boarded a ferry to Jungdo Island. It wasn’t much more than a campsite for families but I was able to rent a bike and ride it around the practically empty bike trails circling the island. While I had hoped to find a few cafes there, I was quite content with the silence and serenity of biking alone, especially when I spend most of my time with kindergartners. 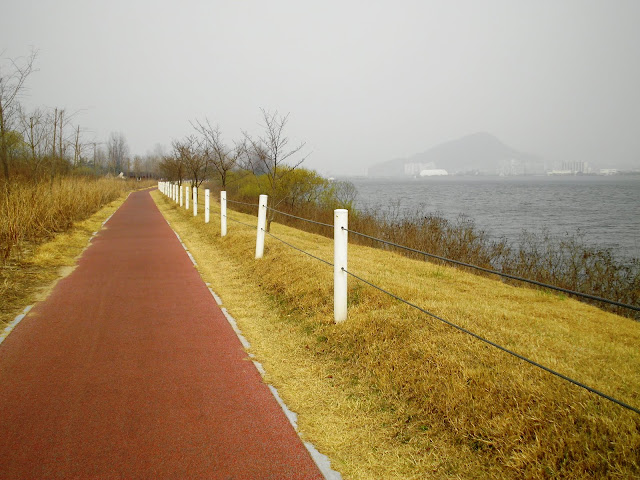 Heading back to the city, I found myself quite content with a belly full of yummy food and a clear mind. The two hour trip was definitely worth it, as the dalkgalbi of Chuncheon really is beyond comparison. Nevertheless, I’m determined to be able to cook up the dish myself. I have a few months left to perfect my cooking skills and master the recipe while in Seoul. Come November, I’ll round up the essential ingredients to bring home to family and friends some of the best flavors Korea has to offer; I have no doubts that dalkgalbi will be a favorite.

For more information on the attractions of Chuncheon, click here.  To get to there, follow these directions.