By Mimsie Ladner on Wednesday, April 6, 2011
I feel a bit ashamed at the fact that after living in Korea for two years, I can count on one hand the number of places I’ve been outside of Seoul. So, with the arrival of spring, I’ve made a resolution to get out of the city as often as I can.

This past weekend, I joined a trip organized by Discover Korea to Tongyeong, a city located on the southern coast of the Korean peninsula. After a less than sound sleep on the overnight bus, our group of 70 arrived at the city known as the “Napoli of Korea”. The sun hadn’t yet risen but I was quickly snapped out of my grogginess at the sight of the sea. The main attraction of the tour was a hike on Jagged Ridge Island, but the hiking itself looked pretty intense and I opted to take the route to So Mae Moor Do, an island known for its stunning views and natural beauty. Our group loaded up into taxis and boarded the ferry at the terminal. It was a bit too windy to ride on the deck, so we chatted and got to know one another on the hour and a half ride to the island from the inside. I had wanted to catch a glimpse of the islands as we boated through the Hallyeo National Marine Park, but I was enjoying meeting some new friends. It’s hard to find like-minded people here so I was glad to have the opportunity to do so.

Immediately upon docking at So Mae Moor Do, the winds took control of my hair and the aromas of gasoline and salty air captivated my senses. Sea gulls squawked overhead and sea spray splashed us as the waves crashed on nearby rocks. It was an environment I had been away from for far too long and I was loving it, though I could feel a tinge of homesickness bubbling up in my stomach. The island is basically inhabited by fishermen and there seemed to always be someone carrying around a net of the morning’s catch from here to there or a woman sitting on one of the small dusty roads selling a bundle of dried seaweed. Trying not to get blown a way, our group didn’t waste a minute to head up the mountain for better views. 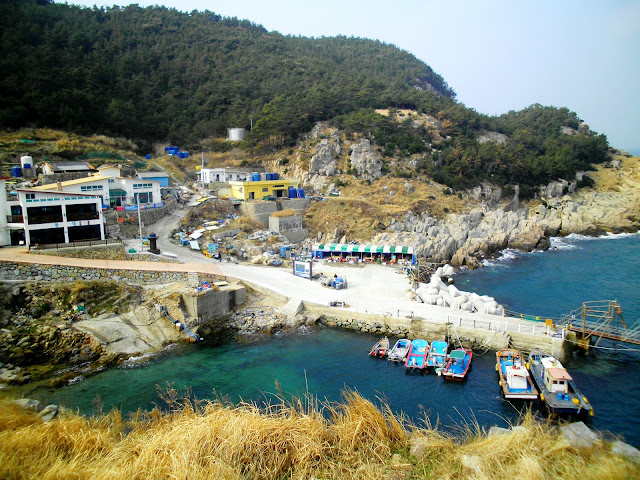 The harbor and wharf on So Mae Moor Do. 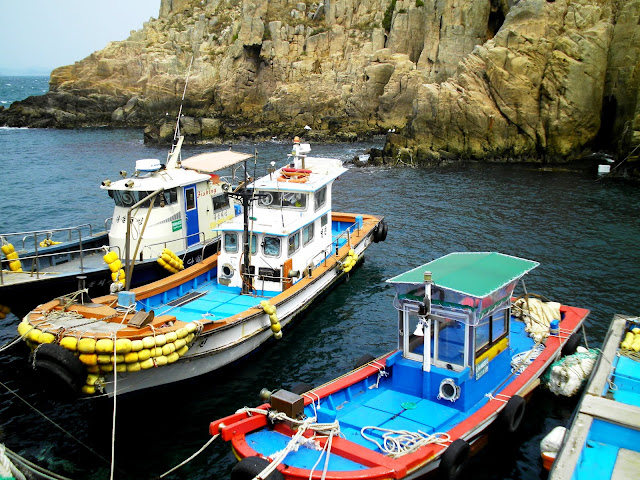 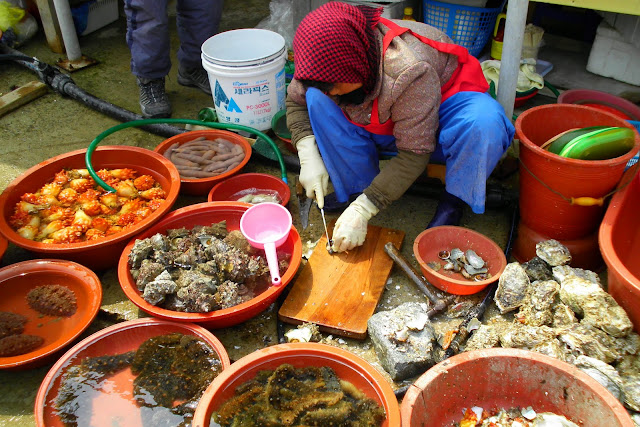 Women shucked oysters and other shellfish selling their catch to residents and visitors alike.

Following a trail that circled around the island, we were treated to stunning scenery at every turn. The higher we hiked, the more beautiful it became. It was a bit overcast and the winds were blowing with full gusto, but the weather made the views no less enjoyable. Cliffs jutted out in every which direction and from a distance, rock formations rose up from the waters resembling a spiked tail of some colossal sea monster. The highlight of our hike was seeing a picturesque hill of green set into the turquoise of the sea, topped with a quaint lighthouse. Many Koreans gathered in the area for picnics and makgeolli. After taking it in, we headed back toward the wharf for some lunch and a pre-noon beer in what seemed like the only restaurant on the island, set among the stone houses of the fishing village. I had some delicious fish and inhaled most of the banchon (side dishes) on the table. 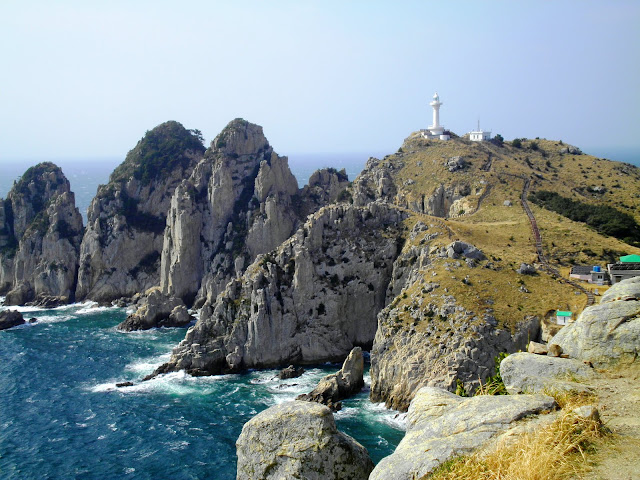 Stunning scenery… yes, this is Korea!
Exhaustion had started to take over when it was time to board the ferry back to Tongyeong. As is when entering a Korean home, we removed our shoes when we boarded the boat. To our surprise, the floors were padded and heated and a line of Koreans immediately layed down, in sardine fashion, on the floors. We recognized the strangeness of the sight but were quick to follow suit and were lulled to sleep by the hum of the engine and the rocking of the waves. After getting back to Tongyeong, we agreed that it was the most comfortable most of us had been in a few days. 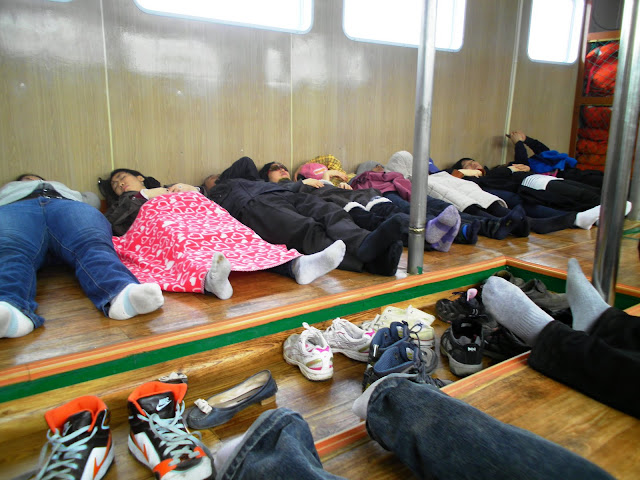 Sprawled out like sardines, we slept sooooo well on the ferry back to Tongyeong.


Five other girls and I snatched up a room overlooking a harbor and a couple of us went for a walk around the area. Seeing the humble, single-story homes was a nice change from the communist-like apartment buildings of Seoul. We also stopped a few elderly women in their tracks who offered us gracious smiles. I had forgotten what a slow pace felt like… and I was enjoying it. We got back to the pension (Korean version of a condo) and got ready for the barbecue. William, the organizer, did a good job of stockpiling pork- something like 40 pounds of it- and we made lettuce wraps with vegetables. He also cooked up a mean kimchi jiggae that was, simply put, the bomb.

Exhausted and tipsy, but satisfied with good food, good company, and an overall good day, I headed back to the room and crashed. It was an early morning and after a breakfast of egg and cheese sandwiches (oh, how I’ve missed them!) we headed to the harbor to see a replica of the famous turtle ships. Lee Sun Shin, a Korean naval commander during the 1500s, is known for being one of the best admirals in the country’s history, being victorious in almost every naval battle he commanded. He utilized turtle ships in his battles- vessels that had a top deck covered with an armored shell adorned with spikes to discourage the enemy from coming on board. Lee forever became a hero to Koreans when he defeated a Japanese attack of over 300 ships with just 13 turtle ships of his own. He was a pretty cool ass dude if I might say so myself, so it was cool to see the ships.

We took a different route back to Seoul to check out the Jinhae cherry blossom festival. With the weather still being a bit chilly, the flowers had only bloomed 20% but they were still quite beautiful. We walked along the city’s stream on the wooden bridge that stretched for some distance. As with all festivals, copious amounts of soju are involved and we had free entertainment from some old men who had had just a bit too much of the firewater. As they removed various items of clothing- a handkerchief here, a belt there- they used them to resemble instruments. Their violin-belt playing had us laughing and it was a good way to end the trip. 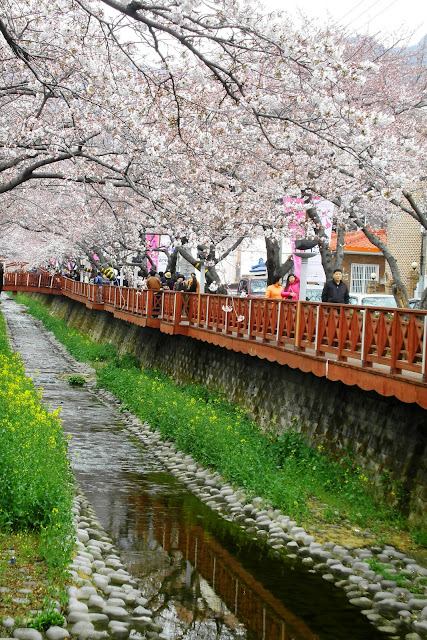 Cherry blossoms, not yet fully in bloom, canopy this walkway in Jinhae, Korea.

Although tired upon arriving back in Seoul, I was so happy that I had gone on the trip. I could really kick myself for waiting this long to start exploring the rest of Korea, but Tongyeong was a good place to start. It was a beautiful, friendly city and having cool people on the trip was a total bonus. The only problem now, however, is figuring out where to go next.