There’s a Korean expression that describes the latest cold snap: 꽃샘추위 or “Kkotsaemchuwi” literally meaning “the cold is jealous of the spring flowers.” Whenever the weather starts to get relatively pleasant here, there’s always a few cold snaps before spring can get the chance to really to set in. Despite winter’s jealousy issues, I’ve been happy with the nice weather over the past couple weeks. Being able to walk around outside without a jacket for the first time after having to bundle up in a clothing cocoon for the past few months is quite refreshing and I feel that it would really be a sin to waste away the wonderful weather indoors.

I took advantage of the nice weather last weekend to go on a hike up Inwang-san in the city center of Seoul. While the mountain is quite small, it provides for a really cool experience as it is considered to be quite a sacred site for Shamanists and is a center for folk-religious traditions. While most people in Korea are either Christian or Buddhist, shamans, or mudangs, are still quite common. Korean shamans are usually women and serve as an intermediary between humans and the heavenly gods and nature spirits. According to Wikipedia, Shamanist deities also include: spirits who inhabit trees, sacred caves, and piles of stones, as well as earth spirits, mischievous goblins, and the ghosts of persons who in many cases met tragic ends. Images depicting and stories describing these spirits can be seen in many aspects of Korean culture, from the gargoyle-like figures on the roofs of palace buildings meant to ward off evil goblins to traditional ink drawings and literature. Shamans hold gut, or traditional services, for various purposes, ranging from those that provide good luck to clients, cure illnesses, exorcise evil spirits, and guide the spirits of the recently deceased to heaven. All of said services are believed to be a type of magic or sorcery carried out with the shaman speaking in tongues in a trance state.

Shamans are often discriminated against in Korean society and during the 1980s, the Korean government attempted to eradicate the religion entirely and regarded it as backward and as mere superstition. Yet, as Korea quickly modernized, society clung tightly to its traditions and folklore, keeping the religion in practice. Today, tarot readings and fortune telling is a pretty big business in Korea and outlets for such services can be found all over Seoul. So, I assume that many mudangs make a living in these venues. I remember watching an episode of Grey’s Anatomy a few years back in which Meredith was taking care of an Asian patient (I can’t remember if she was Korean or not) whose father refused to let her have surgery until his shaman arrived to perform a ritual over her body. I take it people who have faith in shamans (including Korean Buddhists and Christians) are willing to pay a lot of money for their services.

Upon entering the main gate of Inwangsan, I immediately felt as if I were walking into a distant, spiritual world, far from the chaos of Seoul. Gentle winds rolled in as the sounds of chanting, gongs, and drums sounded from a close distance. While there aren’t many maps or signposts indicating a route on the mountain, I let my intuition guide me up a staircase past an impressive Buddhist bell where I found the source of the hypnotizing chanting: Guksadang. The temple did have a description (so I wasn’t totally lost) that noted it was built in the late Joseon period and was relocated in the 1920s; once used for exorcisms, it is now used for various Shamanist gut, including initiation rites. 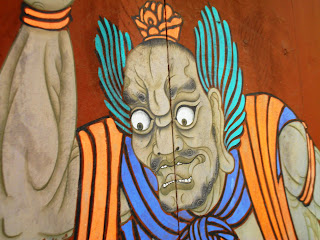 Buddhist iconography can be seen on various buildings on Inwangsan. Most Shamans are also Buddhists.
I felt fortunate enough to be there when a rite was being held. I didn’t want to come across as being disrespectful, so I stayed put and observed from the outside. I could see that there was an alter inside the temple, adorned with various food items and what I assumed to be religious idols. A man sat and kept a rhythm on his drum while a woman (the shaman, I assume) dressed in a brightly colored hanbok danced around with a large fan, chanting a song. There didn’t seem to be but a few people inside and none of them took notice of me. I noticed a huge pile of soju bottles outside the temple and assumed that the gods who received the sacrifice must have been pretty satisfied. Birds started circling overhead and I wondered if the shaman was communicating with their spirits. I quickly realized they were zooming in on the food scraps next to me. 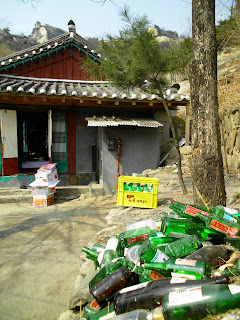 Soju bottles sit outside of Guksadang temple, no doubt used in a sacrifice to the spirits. 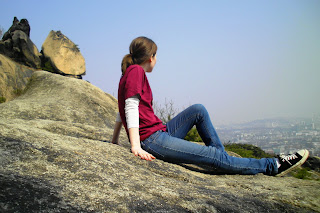 There are plenty of great places on Inwangsan to relax and get a great view of the city.
I went further up Inwangsan to find some awesomely eerie rock formations, including one that resembles a hooded monk and another aptly named (and translated to) “Skull Rock” as it looks like, well, a skull. There were many people sitting, quietly chanting prayers and others who smiled and greeted me as we crossed paths. One man had even snapped some photos of me and sent them to me later that night after getting my e-mail address. I often find myself losing my cool with impatient people on the streets or in subways but it seems that everyone is in a much better, less-rushed mood when they’re in the mountains. 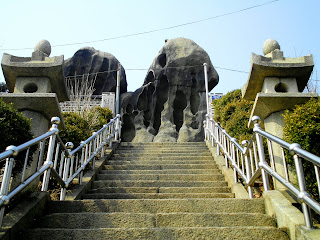 Interesting rock formations dot the cliffs of the mountain. Skull rock sits looking out toward Namsan Tower.
I found a seemingly uninterrupted boulder with a nice view of the city and parked it there for a while to soak up the sun and the natural beauty that encapsulated me. After saying my goodbyes to the mountain spirits, I walked alongside the fortress wall back toward Dongnimmun station feeling refreshed after my short, spiritual mini-getaway from Seoul.
3
Previous Post
Next Post