Pizza topped with corn. Pasta served with sweet pickles. Tacos drizzled with anti-sour cream. Korea has never really done western food well. In the past, one would have to travel all the way to Itaewon to get decent but overpriced European/American cuisine. Even then, the restaurants are mostly foreigner owned. Fortunately, things are changing.

Recently, western food has peaked the interest of those living in the land of kimchi. It’s certain that Seoul’s own Edward Kwon has had something to do with it. As the first celebrity chef of Korea, Kwon has created a food frenzy with his restaurants and culinary projects in the city. Having worked as a top chef in the ritziest hotels of America, Asia, and the Middle East, he has the knowledge and the passion to glamorize the food business and convert the average Kim into a bona fide foodie.

I had actually never heard of him until I got the opportunity to appear as a ‘guest judge’ on an episode of his television show, “Yes Chef.” The show is now in its second season on QTV and is very similar to America’s “Top Chef” in that it’s a cooking competition made up of high pressure challenges with a nice monetary prize for the winner. In the first season, Kwon quickly gained the reputation of being Korea’s own Gordon Ramsey with his bad temper and impossible-to-please attitude. There were about 30 other foreigners invited to participate in the filming and we caught our first glimpse of Kwon while waiting to be seated. “I’m sooo fucking tired!” were the first words he said as he pushed through the doors while passing to the kitchen where the two teams of chefs were preparing our meals. He was quick to shoot us a friendly a smile upon noticing us and threw in a bit of flattery, “Wow… look at all these beautiful women!” It was a good save; I’m sure he’s a charmer outside the kitchen. 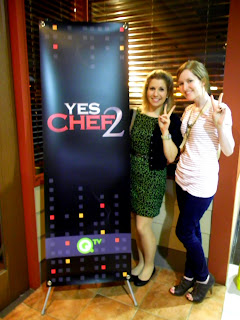 My friend Suzanne and I waiting to be seated as guest judges on Season 2 of “Yes Chef.”

We were able to chose from one of two menus which featured dishes using grapes as the main ingredient. Everyone at my table ordered the same meal: grape salsa with a barley nacho, 3 cheese risotto and grape salad, and a steak topped with Gorgonzola and blueberry. We were told to vote on whether or not we liked it. I found that while it wasn’t necessarily gourmet, it was pleasing to the palate so I voted in favor of the menu. Besides having cameras in my face as I scarfed down the food, it was a good experience. But, I was left curious about this Edward Kwon character and became eager to learn more. 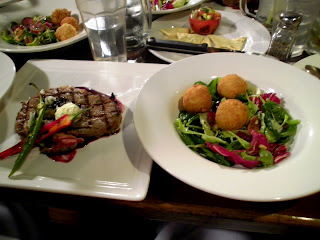 We chose the white team’s menu, featuring a grape salsa and risotto and grape salad. 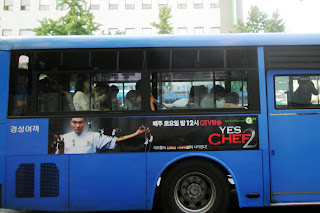 An advertisement for “Yes Chef” on a Seoul City bus announces the airing of the second season.
So, after Google stalking him and learning that in addition to his flair for western cuisine, he has also done well in his efforts to globalize Korean food. I also discovered that he has opened quite a few restaurants around Seoul. I decided to treat myself to dinner at Eddy’s Cafe, his casual dining project, located in the basement of the Shinsegae Department Store at the Express Bus Terminal near Gangnam. The first thing I noticed was the cool, modern interior but I was quickly distracted by the menu, which apparently changes every so often. Featuring sandwiches, salads, soups, and a few entrees, it was a bit limited but as I’ve learned, this aspect of a restaurant is almost always a sign of better quality food. The ingredients of the items also excited me as most of them, like fig, truffle, feta cheese, and mint, are rarely found in Korea. Yet the biggest surprise was the price; everything on the menu was under 15,000 won ($15).

I settled on the charcoal grill baby young chicken with mustard green, roast balsamic apple, and warm vinaigrette with a petit salad. The servers spoke English and the service was excellent but what really did it for me was the food. All of the flavors blended well together and the portion size was ridiculously large. It was the first time in a long time that I wasn’t able to finish my entire meal. I will be sure to return many times and have plans to check out his other restaurant, The Spice, a fine dining joint that is said to offer just as tasty course meals at a non-gourmet price. 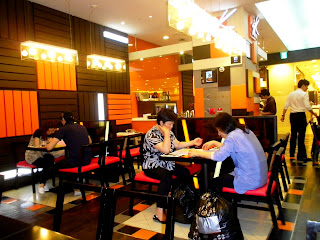 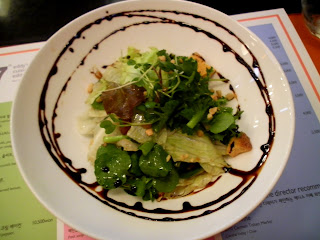 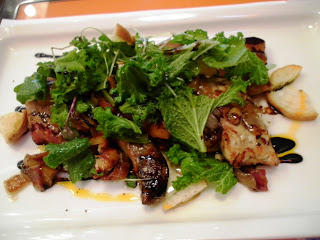 With a light charcoal flavor, the chicken pairs nicely with the soft, sweet balsamic apple.

As the foodie lifestyle continues to flourish in Seoul and the tastebuds of its citizens demand genuine Western cuisine, it’s certain that other Korean chefs will begin to take on a similar mission of Edward Kwon’s. I don’t think it will be long before specialty ingredients will line the shelves of grocery stores and Korean housewives will be experts at making pot roasts, pies, and pizzas- without the corn, of course.