Of my 25 birthdays, three of them stick out in my memory. My 16th: celebrated with an extravagant coming-of-age party with about 20 other girls from my class, it was a day that marked the beginning of freedom and the chance to finally drive without a parent in the car. My 18th: I officially became an adult and could legally go to a bar, vote, and buy cigarettes (the latter I’ve never even done but it was cool to know that I could). My 21st: I could finally buy alcohol without worrying about getting arrested or caught with my fake ID of a Mexican girl who clearly didn’t resemble me in the least.

In Western culture, we relish those birthdays in which we gain what we think is freedom, yet we are still young enough to not have to be fully responsible. It’s often thought that after 21, it’s all down-hill. Birthdays become less of a celebration and more of a reminder that our glory days are over. We start to lie about our age.

Yet, in Korea, the most celebrated birthdays are those in which the person is most vulnerable. Or, at least, when they used to be most vulnerable. For example, the 60th birthday is very important in Korean culture. By the time one reaches 60, he or she has lived through the entire cycle of the Chinese zodiac. Another reason this birthday is so important is that it used to be very uncommon that people lived this long. Nowadays, Koreans tend to celebrate this birthday at age 70 instead of 60, as life-expectancy has risen.

The best-known of Korean birthday celebrations, however, is the 1st birthday, or what Koreans call dol or doljanchi. As it was uncommon for a person to reach the age of 60, the death rate amongst infants was also very high. So, in the past, when a child reached the 1 year milestone, the entire village would rejoice with a big celebration. To this day, the tradition is still important to Koreans and there is a lot of money that goes into throwing one of these bashes.

Recently, I was invited to attend my co-worker’s daughter’s dol celebration. I was excited to see her baby girl, Yeh-ji, but was also looking forward to getting the opportunity to experience more of Korean culture. Upon entering the restaurant, I was given a number which I was to place in one of 6 or so cups. Considering I didn’t know what they were, I just tossed my number in a random one. I found my co-workers and we chatted as we ate and admired the colorful decorations.

Certain elements of the dol celebration have changed, but many of the traditions remain the same. In pre-modern times, shamanistic prayer ceremonies and sacrificial rituals were held on mountain tops; nowadays, families and friends gather to party in a local banquet hall, or in my co-worker’s case, Jessica’s Kitchen, an Italian buffet. There isn’t much shamanism that takes place, but a “prayer” table is still arranged with the customary sacrificial foods, such as rice, fruit, and rice cakes. (Upon closer inspection, I realized that all the food was plastic.) She admitted to me that she was not involved in the decoration- she paid the restaurant to take care of all of the formalities. And who can blame her- she’s a working mom after all. I’m guessing for a restaurant to even offer this service that the whole first birthday thing must be a pretty big business in Korea. 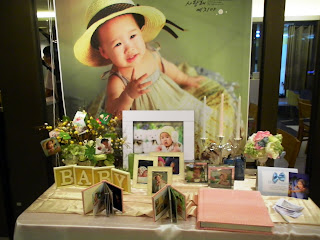 A table at the entrance of the restaurant displayed adorable pictures of baby Yeh-ji. 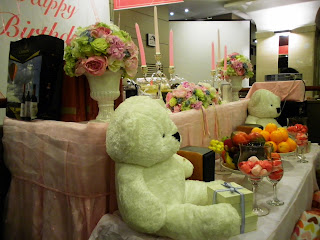 The “prayer table” displays some traditional sacrificial foods common at the first birthday party. I’m guessing that they didn’t use teddy bears back in the day.

As we were eating, my co-worker, Sue, her husband, and her baby, all dressed in hanbok and her baby wearing the special dol cap, a jobawi, walked around to greet their guests. Little Yeh-ji was just adorable and was hamming it up, as babies do so well. We watched a sideshow of videos and photos of the baby’s first year then the MC announced that we would be starting the fortune telling ritual common at most first birthdays. 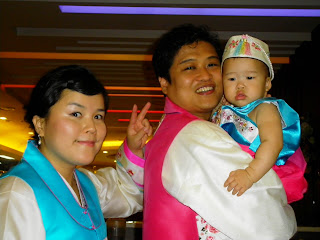 My co-worker, Sue, her husband, and her beautiful angel Yeh-ji dressed in hanbok.
As it turned out, those cups that I was to put my number in were each marked with different objects: pencil, rope, stethoscope, and money to name a few. The baby was seated and then presented with a box containing all of the said items. I was told by a co-worker that the item she picked would predict her future. If she chose the rope, she would have a long life. The pencil indicated she would be a scholarly academic. I guessed she would go for the easy-to-grasp stethoscope, symbolizing a future career as a doctor, but, like a good Korean girl, she went for the 50,000 won bill. Of course, everyone laughed at this. It was even funnier that over 20 minutes later, she was still waving around the money, wearing her newly acquired gold ring, a common gift given at the first birthday, and smiling from ear to ear. 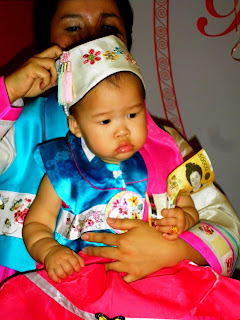 After choosing money from the fortune telling box, little Yeh-ji refused to let go of the 50,000 won bill. Smart girl.

There was another quick game in which guests had to guess the baby’s time of birth, weight at birth, and so on, followed by a speech from Sue. Seeing as I was the only foreigner in attendance, I felt especially honored when Sue turned to me and spoke a brief thank you message in English so that I could understand what she was saying. It’s such small gestures that remind me of how warm Koreans can be.

Though malnutrition and disease amongst children in Korea has drastically decreased in modern times, the first birthday isn’t any less important. Sure, it may be a bit more commercialized and slightly less traditional, but it’s the mark of the beginning of life. And what’s more beautiful than than that?