It would be wrong in every sense of the word to maintain this blog without writing an entry dedicated entirely to Korea’s national dish, kimchi. It would be like leaving out the Eiffel Tower in a travel guide to Paris, or ignoring the conical hats in a description of Vietnam. So much of Korean life- both in the past and present- revolves around the famous spicy food. It can be found in just about every restaurant in the country. There’s a museum dedicated to the stuff at COEX mall in Seoul. Koreans even say “kimchi” in place of “cheese” when being photographed.

Yet, contrary to what many Westerners think, kimchi is not actually a single dish. While baechu kimchi, made with cabbage happens to be what most people picture when they think of kimchi, there are over 180 varieties of the fermented foodstuff, each containing a different main ingredient and each originating from a different location of the country. Regardless of the type, kimchi is generally made the same way. The central ingredient is usually a vegetable which is salted and then mixed with various condiments, such as red pepper, fish sauce, garlic, and/or brine. For most families, there are two big kimchi-making days a year and both mom and kids alike are involved in the process. 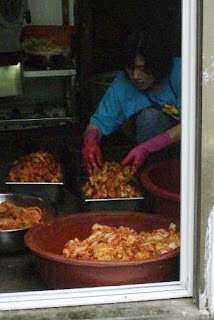 A woman prepares kimchi to serve at her restaurant. 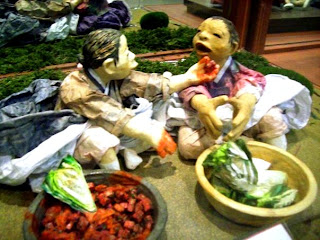 In the past, kimchi was placed in large pots that were then buried in the ground to allow the dish to ferment. It was just a couple decades ago that refrigeration became widespread, which clearly made the kimchi-making process much easier. Now, it’s possible to consume the stuff without waiting forever for it to ferment, though I must say that like wine, kimchi is better with age. Most families have two refrigerators in their homes: one for regular food products and the other for kimchi. Actually, there are refrigerators made specifically for the purpose of keeping kimchi; they keep the pungent smells from contaminating other foods… and household items. I once had a lady make me two huge bags of it as a gift. I had already been warned that if not careful, the smells would infuse everything in my apartment. I made sure to triple-bag it before putting it in sealed Tupperware inside my refrigerator. It was only two days before my bed and clothes stunk of the stuff. Even after human consumption, the heady odors are released through the pores; this is especially evident on hot days when sweating is inevitable. Needless to say, the subways are not the most pleasant places to be during the dog days of summer. 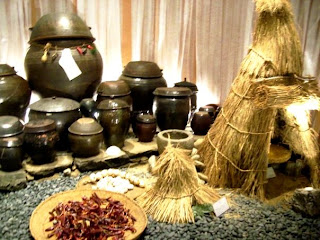 An exhibit at the Kimchi Field Museum in Seoul displays traditional methods for making and storing kimchi. 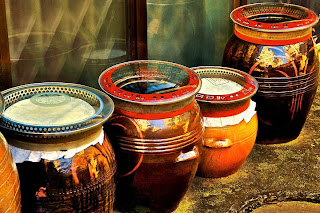 While kimchi pots are used for fermentation, they are also a beautiful icon of Korea. (Photo credit: Luther Ladner)

Despite the strong smell, kimchi is quite delicious. Some may argue that westerns have to acquire a taste for the dish to truly enjoy it. For me, it was love at first bite. I’m not completely certain how many types of kimchi I’ve tried, but considering all the banchan (side dishes) that are served up with Korean cuisine, I’m guessing it’s a lot. I have my favorites and I fervently stand behind my claim that the following are the best kimchis to be found in Korea:

4. Baechu (Cabbage) Kimchi: The most common kimchi makes my list of the best, as it is what I have grown most accustomed to. I like it when it’s really packed with red pepper powder. The rich red color lets me know it’s going to be spicy, but delicious.

3. Kkakugi (Radish) Kimchi: This kimchi has all the ingredients of normal kimchi, but instead of cabbage, it’s main ingredient is daikon, or white raddish. The radish is usually cut into cubes and mixed with salt, red chili powder, and ginger to produce a crunchy kimchi that pairs well with meaty soups. It’s said to help aid in digestion, as most kimchi does.

2. Mool (Water) Kimchi: I have really started to like cold soups and mul kimchi falls under that category. While green onion, radish, and garlic are used to make this kimchi, it is mostly water, as it’s name implies and is eaten with a spoon. It’s especially refreshing in the summer, as it is light and taste.

1. Oisobagi (Stuffed Cucumber) Kimchi: Another kimchi that’s popular in the summer, oisobagi kimchi uses all the main ingredients of the kimchis listed above, but with cucumbers as the central ingredient. It almost tastes like spicy pickles. If you haven’t caught on, I’m really fond of light, crunchy foods and this one tops my list.

And the worst kimchi…

Kimchi Chocolate: Okay, so it’s technically not kimchi but I had to mention it. It’s mostly sold as a souvenir and the majority of Koreans have never even tried it. All I’ll say is that both the idea, as well as the taste of it are just wrong in so many ways. 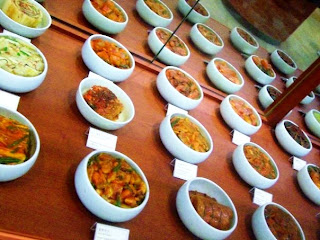 With over 180 varieties of kimchi, there’s a flavor for everyone.

The best thing about kimchi is that it has been classified as one of the few superfoods of the world. Known for being packed with vitamins and antioxidants, it’s said to prevent anything from cancer to SARS. It’s believed, even amongst the scientific population, that kimchi kept SARS from affecting Korea during the Asian outbreak of the disease in 2003. Move over, Superman, Superkimchi is here to save the world. And, it is in fact now being imported all throughout the world as Korean cookery becomes a trend amongst foodies. So, to all those needing a nutritional boost, grab your chopsticks and head to the nearest Korean restaurant or Asian market to sample the nation’s culture in culinary form. I promise you’ll be asking for seconds.