Well, it has finally arrived. The Expo, that is. Koreans have been anticipating this event like crazy and it seems that planning has been going on forever. When I first heard of it, I didn’t quite know what to expect. Of course I had heard of expos before, but wasn’t exactly sure what a world expo really was. Last weekend, I was fortunate enough to find out first hand with fellow K-Performance Supporters on the Expo Road Mission sponsored by the Korean Tourism Organization.

Our bus departed early from Seoul and headed south toward Yeosu, a small coastal city in southern Jeollanam province. While the area has generally been associated more with agriculture and less with tourism, it has seen its fair share of development since winning the bid for the 2012 Expo.

When we arrived, I was immediately impressed by the grand scale of it all. Immense modern structures towered high in the sky next to interesting contemporary buildings constructed on or near the water. Crowds had already lined up for many of the attractions (particularly the aquarium) and there was a festive feeling in the air.

We had been partnered off into teams to accomplish various “missions”- mostly taking photographs with different things at the expo- but my teammate, Marie, and I decided food was our first priority. We headed in the direction of the international pavilion after watching a mime performance and quickly located the food court. We were a bit let down by the selection offered and settled on a pre-made bento box. We later regretted our choice when we learned that some of the countries’ pavilions, including Singapore, India, and Turkey, sold food items. 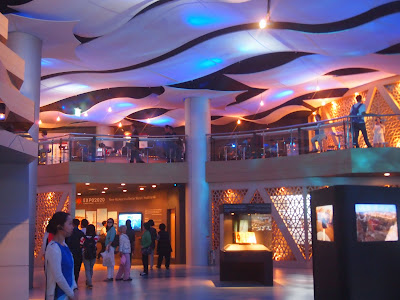 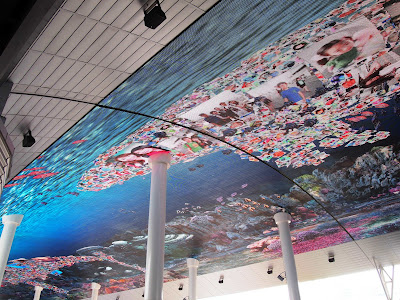 A huge LCD screen covered the entirety of this walkway. On it, a mosaic image of a whale made up of pictures of expo visitors swam across the screen.

After lunch, I wasn’t feeling very well so we explored at a slower pace. It was really cool to see the various booths constructed by many of the participating countries. Each pavilion kept with the theme of this year’s expo, “The Living Ocean and Coast,” to promote protection and sustainability of the world’s water systems. Many of the countries presented videos based on these themes while others held performances of their own cultural dances and music.

We noticed large crowds gathering by the “Big O” and decided to check it out. A water show had begun by the time we arrived. Water shot out of the monstrous O shaped steel structure while stuntmen performed tricks on jet skis and a man came out of no where on a water powered jet pack. It was all very futuristic and entertaining. We were amused. 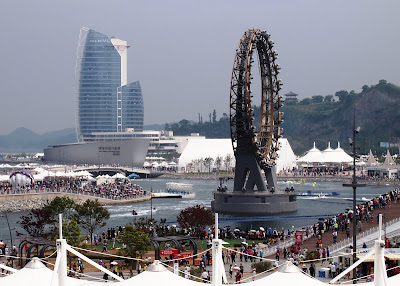 The “Big O” was the centerpiece of the impressive architectural structures at the expo. 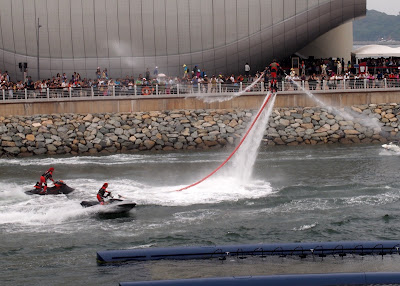 We caught a few more performances, including jultagi, a traditional Korean tightrope act. We had our names written in Arabic by a representative at the Yemen booth, tried some rum with a friendly citizen of Guyana, and snapped a photo with a man donned in a peacock costume near Cambodia before meeting up with the rest of the K-Supporters for the K-pop concert. 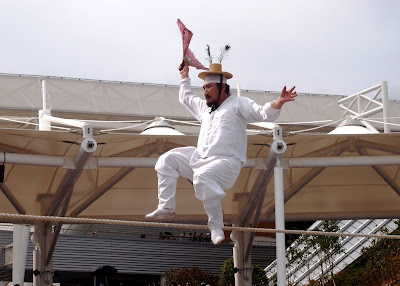 A jultagi performer bounces on the tightrope. 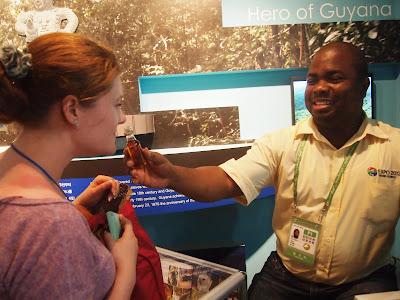 A representative from Guyana lets us try his nation’s rum.

We were lucky to have front row seats for the show, which was held on the stage just below the Big O. The dancers of the non-verbal performance Sachoom opened the show while fangirls grew impatient waiting for their favorite acts. It wasn’t long before Jay Park took the stage with “Know Your Name” and a great cover of B.O.B.’s “Nothing On You.” The crowd grew excited as B2B, 4 Minute, and Beast followed. Unfortunately, Marie and I missed the Big O Show, one of the main draws of the expo, due to my being sick and our fears of not being able to get a taxi home. Nevertheless, the K-pop show was a good end to a fun-filled day at the expo. 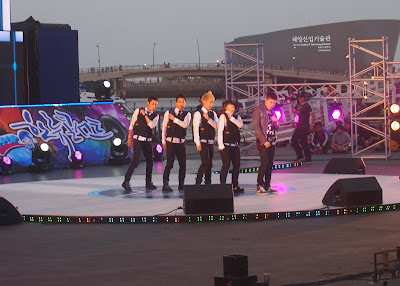 Jay Park and his backup dancers were great.

The 2012 Yeosu Expo was definitely worth checking out and offers visitors all sorts of fun in one location. As it was a bit hectic during the weekend, it is recommended that visitors plan their trip during the week. Two days is the recommended time to see the expo, as there is really so much to do and experience. For more information, check out this website.