Although the expo is the main draw of Yeosu, it’s not the only attraction worth checking out.

Before there was any talk of an expo, Yeosu was most famous for its natural beauty. As Yeosu sits on the southern coast of the peninsula, stunning ocean views are plentiful. Some of the more magnificent scenery can be witnessed on Odong-do, or Odong Island. Once a navy base for Yi Sun-shin during the Japanese invasion in the 1500s, Odong-do is now a destination for tourists and nature-lovers alike.

The K-Performance Supporters were treated to a tour before we departed Yeosu on our recent expo road mission. We boarded a small tractor train that transported us the length of the breakwater that connects the island to the shoreline. When we arrived, we were quickly met by our tour guide that led us around a path that gave us a glimpse of Odong-do. 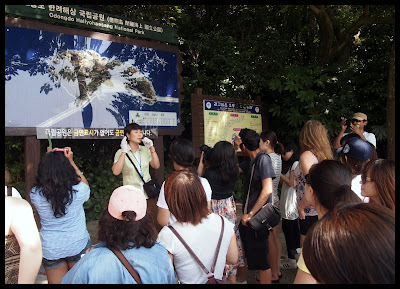 The K-Performance Supporters were given a nice tour of Odong island.

I had been feeling a bit ill, but immediately felt a bit better when we entered the bamboo forest. It was lush and tranquil and offered some much-needed shade. The salty sea air offered a treat for my senses and just the right amount of energy to continue on with our tour. We were able to catch a few views of the water, though I have been assured that what we saw was only the tip of the iceberg. The real views were not accessible from the path we were on. Still, it was all very beautiful. 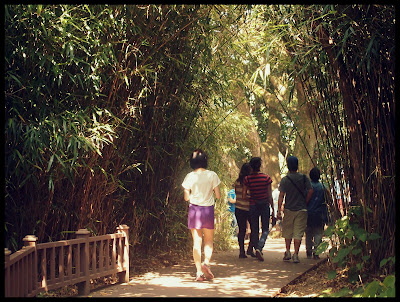 Walking through the bamboo forest. 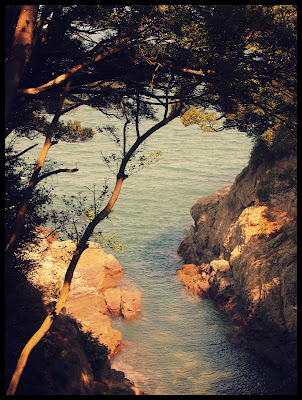 Though we didn’t get the chance to see the ‘real’ views, we had some nice glimpses of the water.

We continued on and reached a lighthouse. Fortunately, there was an elevator that brought us to the observation deck as none of us were feeling the stairs. Finally! Some unobstructed scenery. We were able to make out certain structures at the expo, like the Big O and the theme pavilion. In the opposite direction, boats zoomed around and mountains towered over them majestically. 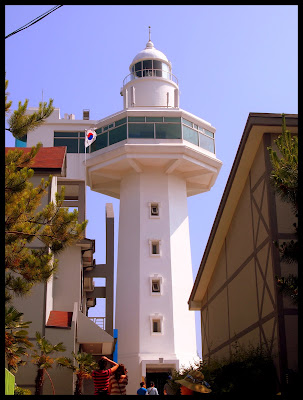 The lighthouse on Odong-do offered a 360 degree view of the island the Yeosu coast.

Before we knew it, our watered-down but pleasant tour was over and we were off to Seoul after snapping a group photo. There was a lot we weren’t able to see, like the famous camellias that bloom from November to April or the locally owned and operated seafood restaurants. I guess I’ll just have to wait until next time.

It’s always nice to be able to experience a dynamic Korea. It’s not everywhere where one can dance along with futuristic robots one minute and be in a lighthouse overlooking a fish farm the next. The expo is highly recommended, but Odong Island is just as worthy.

For more information on visiting Yeosu and Odong-do, click here.