I won’t try to pretend that I’m an art enthusiast.  I’m not.  Sure, I enjoy going to museums and looking at paintings and sculptures and photographs, but I’ve always been the type of person that is entertained by these types of art rather than moved or inspired by them.  I wish I could say that a splatter of paint is enough to make me contemplate the complexities of life, but it isn’t.  Which is why I was incredibly surprised to find myself deep in thought at the Spell On You exhibit at the Seoul Museum of Art this past weekend.

Spell On You is the seventh edition of the Seoul International Media Biennale and this year’s exhibit attempts to show off a variety of contemporary media art.  Works on display are contributions of over fifty artists from around the world and each demonstrates how new technology and social media have shifted human communication and social interaction as we know it. 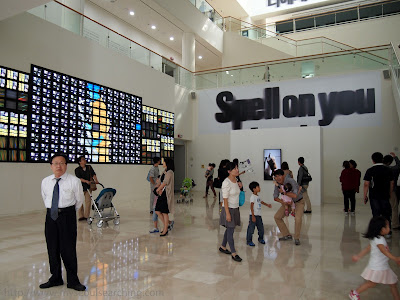 Spell on You is a unique exhibit now showing at the Seoul Museum of Art.

Recently, I’ve found myself unable to get through an hour of the day without checking my Facebook, Instagram, Twitter, and Kakao Story accounts.  I’m very much addicted to social networking so many of the exhibits had me thinking about how my life has become affected by and dependent upon such technology.  There were a number of works that were particularly thought provoking:

“Fly Tweet” by David Bowen:   This mixed media piece is essentially a plastic cage housing living houseflies and a keyboard.  The flies move around freely, monitored by a video camera.  Whenever a fly lands on a letter of the keyboard, the corresponding character is entered into a Twitter text box.  After 140 characters have been entered, the message is posted to the internet.  Follow the flies: @flycolony. 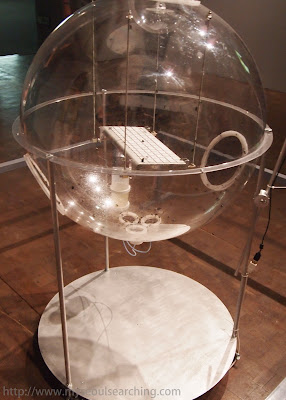 “DesktopBAM” by exonemo:  In this piece, mediums of automated mouse cursor, projection, and sound are utilized to allow a computer to act as an entertainer.  As the cursor moves automatically around the screen, it activates various sound and video files in unique sequences.  The screen is designed to look like a human face while the cursor is symbolic of human hands which move quickly to manipulate endless amounts of information. 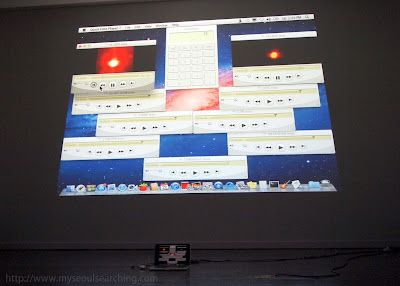 “Default to Public” by Jens Wunderling:  This work touches on themes of self-exposure and privacy by using a projector to display Tweets gathered randomly that are composed near the instillation site.  Transmitting the Tweets from a seemingly private space to one that is unintended and very public. 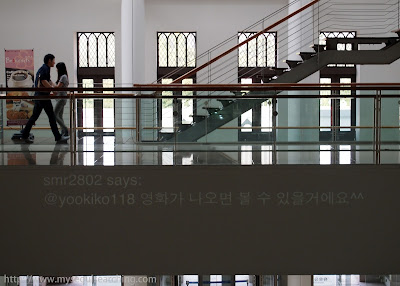 “37 56.4242’N, 126 97.4414’E” by Jae-eun Choi:  This project creates multiple snapshots of the sky seen from the roof of the Seoul Museum of Art.  As the photographs are printed in real-time, they are scattered across the gallery floor, creating an abstract collection of time and space. 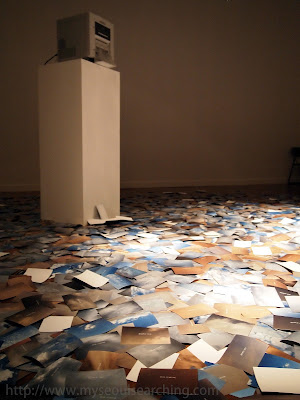 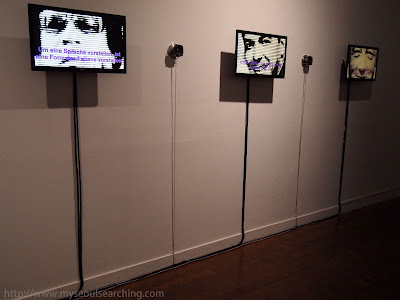 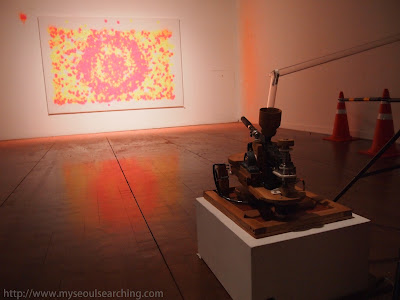 A paintball gun is programmed by a computer to create a painting, removing the human element from the artistic process.

As our methods of communication and social interaction continue to change, so will art as we know it.  Spell on You is an excellent demonstration of evolving artistic medium and the social philosophy of which it represents.

Spell on You will run until November 4, 2012 at the Seoul Museum of Art (see map).  Admission is free.  Make sure to pick up a brochure at the information desk, which explains each work in Korean and in English.