By Mimsie Ladner on Sunday, December 2, 2012
Last week, Korea welcomed its ten millionth tourist with a ceremony at Incheon International Airport.  Tourism in Korea has grown exponentially in recent years, partly due to the improvement of tourism policies and the measures taken by the government to make travel around the peninsula more convenient for foreigners.  Still, there’s a more obvious catalyst for the sudden boom in tourism: Hallyu, a combination of soap operas, movies, and, of course, K-pop.

To celebrate the arrival of the ten millionth tourist, Inkigayo (인기가요), one of Korea’s most popular weekly music TV shows, held a special episode.  I was invited, along with other foreigners from the Korean Tourism Organization’s K-Performance Supporters Team, to be a part of the studio audience during the live filming of the show at SBS Studios.  Although I wouldn’t consider myself a “fangirl” of K-pop, I have grown to like the catchiness of many of the songs and there are a couple artists that I do enjoy listening to.  I’ve also had some pretty cool K-pop related experiences since I’ve been in Korea so I was excited to be able to add this one to the list.

I headed out to SBS Studios at Prism Tower near Digital Media City Station last Sunday to find crowds of teenage girls. Apparently they arrive at daybreak whenever there’s a show with high hopes of getting a ticket or catching a glimpse of their favorite stars arriving in boxey white vans (the preferred method of transport of Korean  stars).  After picking up my own ticket from the KTO reps, I decided to grab a coffee from the cafe in the building.  As it turns out, The Coffee Bean in Prism Tower is the perfect place for celeb spotting, as I saw a few of them while waiting in line, including actor Lee Jong Suk and INFINITE member Sunggyu. Keep that in mind, all you Hallyu fans looking to stalk your K-pop crushes on your next visit to Seoul.

I met some of the other K-Performance Supporters and waited with them in line before entering the studio.  I was surprised to see how small the studio was, with only a few hundred seats and a tiny standing room area around the stage, which seemed to be reserved for the die-hard fans.  It wasn’t long before the MCs, Lee Jong Suk, IU, and Kwanghee, welcomed us.  IU was cool and collected in her cute red dress, despite her recent Twitter “scandal” .  She was quite adorable, singing along to the other artists’ songs throughout the show off on the side stage. 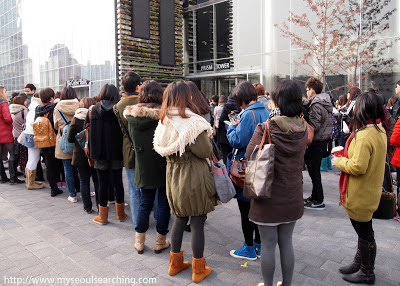 Waiting to be let into the studios. 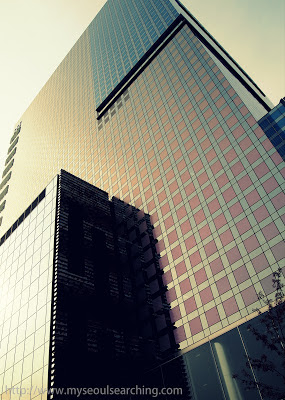 I never realized how much work it took to produce a live show.  There were cameras everywhere- on tracks, in the air, on the stage- and each angle was scripted.  It was also strange to me that only 50% of the “live” show was actually live.  Many of the performances had been pre-recorded; still, the artists came out on stage and performed anyways.  A few of them acted totally different from their usual on-screen selves knowing that their actions wouldn’t be aired.   It was cool to see Hyuna (aka Psy’s love interest in the “Gangnam Style” video) goofing off with the audience, shedding her sultry and seductive stereotype. 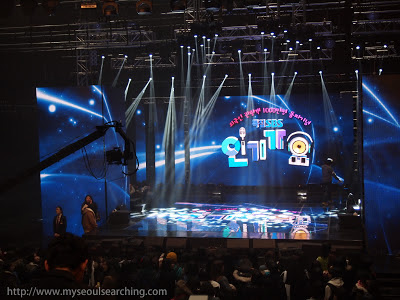 Inside the studio… wasn’t allowed to take photos once the show began. 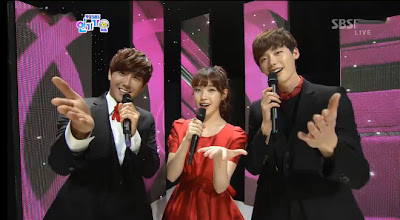 The MCs of the show pose for the cameras. (Photo: SBS)

Many people think K-pop is only cheesy boybands and outrageous outfits, and while some of that is true, there were quite a few performances which proved that there is more to K-pop than people think.  Lee Hi, a newcomer on the scene under YG management, performed “1,2,3,4” with an incredibly powerful and soulful voice (even if it was lip-synched for the show).  Epik High, another YG group, gave the best performance of the evening with “Don’t Hate Me.”  Truly unique artists and excellent performers, these guys definitely have the potential to be the next big Korean act in the West.

Parts of the episode were filmed in Gwanghwamun Plaza and included performances from B1A4, Sistar, and Boyfriend.  It was a cool way to tie tourism into the episode, as many of the bystanders were obviously tourists.  There were also a few videos played in between acts that featured different regions of Korea as well as attractions and food.  Smart marketing technique on SBS’s part, as this episode will no doubt be watched by millions throughout Asia. 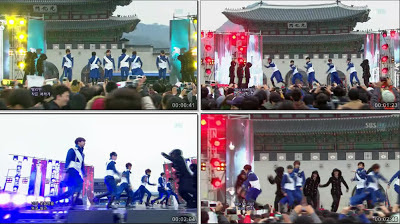 It was a fun day and a cool way to experience Korea’s growing industry of popular culture.  I was appreciative of the Korean Tourism Organization for giving me another great opportunity and for making it so easy to attend the show.  Although it may take a bit more effort, music shows like Inkigayo can be attended by anyone through lotteries and ticket registration via the shows’ websites.  Most of the websites are in Korean, but fortunately, the KTO offers clear directions how to apply for tickets to Inkigayo, Music Bank, and M.net M! Countdown.  Click here for more information on how to register and, while you’re at it, make a sign board and practice the fan chants.  You’ll need it to outshine all those other hardcore fangirls and fanboys.