By Mimsie Ladner on Wednesday, March 26, 2014
If you haven’t heard yet, Ironman, Captain America and The Hulk are headed to Seoul, South Korea. Contrary to what you might think, their visit has less to do with battling trigger-happy Kim Jeong-un and more to do with their filming “Avengers: Age of Ultron,” the sequel to the 2012 Hollywood blockbuster.  It’s rumored that the city will be featured for about fifteen minutes in the film and was chosen for its futuristic architecture and beautiful cityscapes.

Locals were ecstatic upon learning the news that the likes of Scarlett Johansson, Chris Hemsworth and Robert Downey Jr. among others will be filmed in the Korean capital.  There has also been much excitement about the inclusion of local starlet Kim Soo-hyun.  The excitement has been a catalyst for a number of photoshopped images cropping up on the internet which include the costumed cast dining at Kimbap Cheonguk (Korea’s version of fast food), sipping makgeolli and flying over the Cheongyechon. 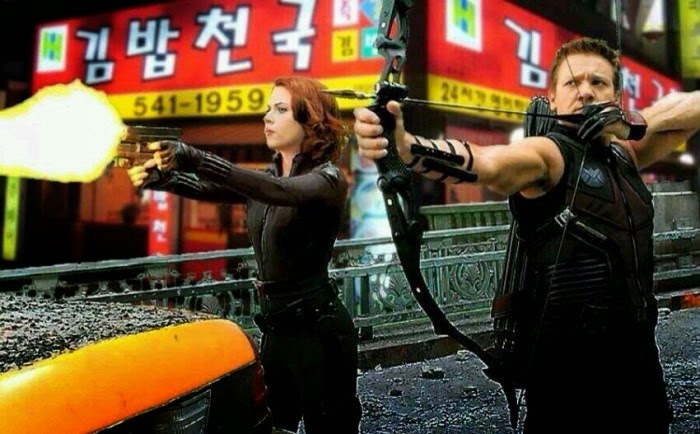 Though it’s doubtful we’ll see Black Widow chomping down on tteokbokki in the final cut, a number of the filming locations have been released, along with the dates the scenes will be filmed there. Check out the list below for where and when to spot your favorite Avenger superheroes.

The Mapo Bridge, one of the 25 bridges that stretches across Seoul’s Han River, connects Yonggang-dong and Yeouido-dong and is 1,400m long and 25m wide.  The landmark, nicknamed “The Bridge of Life,” has become a recent tourist destination of sorts for a rather tragic reason.  Over a hundred people have attempted suicide on this bridge in the past five years and in an effort to combat the problem, the city began posting psychiatrist-created inspirational messages on the bridge’s handrails. Said messages, along with photos of happy families and comfort food, are illuminated at night. Unfortunately, the facelift has failed to prevent the suicide rates from rising.

To get there:  Take the Seoul subway to Mapo Station (Line 5). From Exit 1, walk straight.

Located in Sangam-dong, Digital Media City is an immense innovative digital media entertainment compound. Attractions and facilities include the DMC Promotion Room, DMS (Digital Media Street), DMC Artpia, Digital Pavilion and the Korean Movie Museum.  The complex is still under construction and is expected to be completed in 2015.

To get there: Take the Seoul subway to Digital Media City Station (Line 6). From just outside exit 2, transfer to Bus 7711 or 7730. Get off at the Nuridream Square bus stop or DMC Gallery bus stop (4 bus stops). The venue will be on the left.

Another bridge to be featured in the Avengers sequel is the Cheongdam Bridge which carries a section of Line 7 of the Seoul Subway, and stretches between Cheongdam Station and Ttukseom Resort Station.  Nearby Cheongdam-dong is an upscale neighborhood of boutiques, gourmet restaurants and some of the most expensive real estate in the country.  On the northern end of the bridge is Ttukseom Resort Park, a greenspace of music fountains, a riverside square, a rose garden, playground and a nature learning center.

To get there: Take the Seoul subway to Ttukseom-Resort Station (Seoul Subway Line 7), Exit 2 or 3.

The trendy neighborhood made famous by Psy will also be featured in the film, specifically Gangnam-daero, the main strip of restaurants, cafes, dance clubs and clothing stores.  This particular location might be your best bet for star spotting, as there are plenty of second and third floor cafes that overlook the district’s central street, perfect spots to stake out Hollywood’s finest.

To get there:  Take the Seoul subway to Gangnam Station (line 2), Exit 10.

Kaywon School of Art & Design is a school of arts and design located in Uiwang. The school is known for its creative student body that has received many awards for film and animation production.  Uiwang is quiet, peaceful town surrounded by many mountains and forests, making it a great day trip destination from the Korean capital.

To get there:  Take the Seoul subway to Uiwang Station (line 1), then hail a taxi to the school.

Keep in mind, Marvel fans, that the traffic will be intense and buses and taxis will be rerouted, so consider taking the subway to avoid the chaos.  Also, if you happen to spot any Avengers wandering the streets, feel free to post your pics on Seoul Searching’s Facebook page.  Happy superhero spotting, guys!

Update April 29, 2015: Avengers: Age of Ultron has officially been released here in Korea! Did you spot any of the scenes mentioned above? Also… did you know Korea has its own Avengers? Find out who they are here.