By Mimsie Ladner on Saturday, March 22, 2014
I had been meaning to make it out to Herb Island for quite some time.  The photographs intrigued me.  The images I came across on the internet portrayed the theme park (which, confusingly, is not an island at all) to be the home of enchanting guesthouses, colorful gardens, charming decor and beautiful mountain scenery, seemingly emulated from the pages of a Hans Christian Andersen fairy tale.

I finally got around to making the trek out Pocheon, a city located about an hour northeast of Seoul, last autumn.  Immediately upon my arrival to the park, I felt a sense of eeriness come over me.  Perhaps it was the sight of the armed soldiers and military vehicles on the bus ride over- Pocheon is just a few miles from the North Korean border- or the creepy music box-like melodies looping over the loudspeakers or the sheer lack of people.  I refused to turn around after an almost two hour trip, however, and ventured further into the park.

I walked through a dying garden and past an legless Pinocchio and dilapidated mushroom house, certain some mythical creature was going to jump out and attack me at any moment. 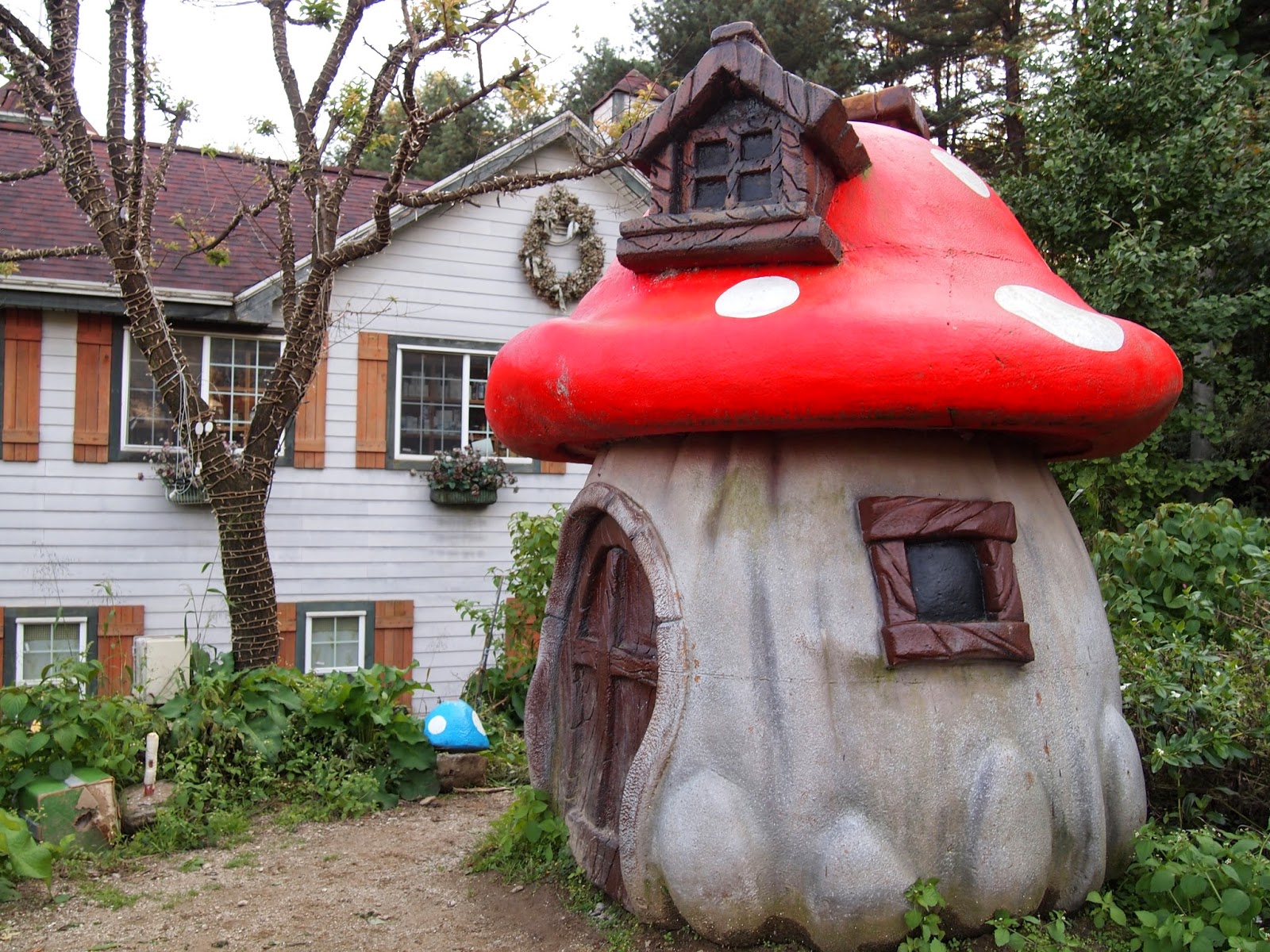 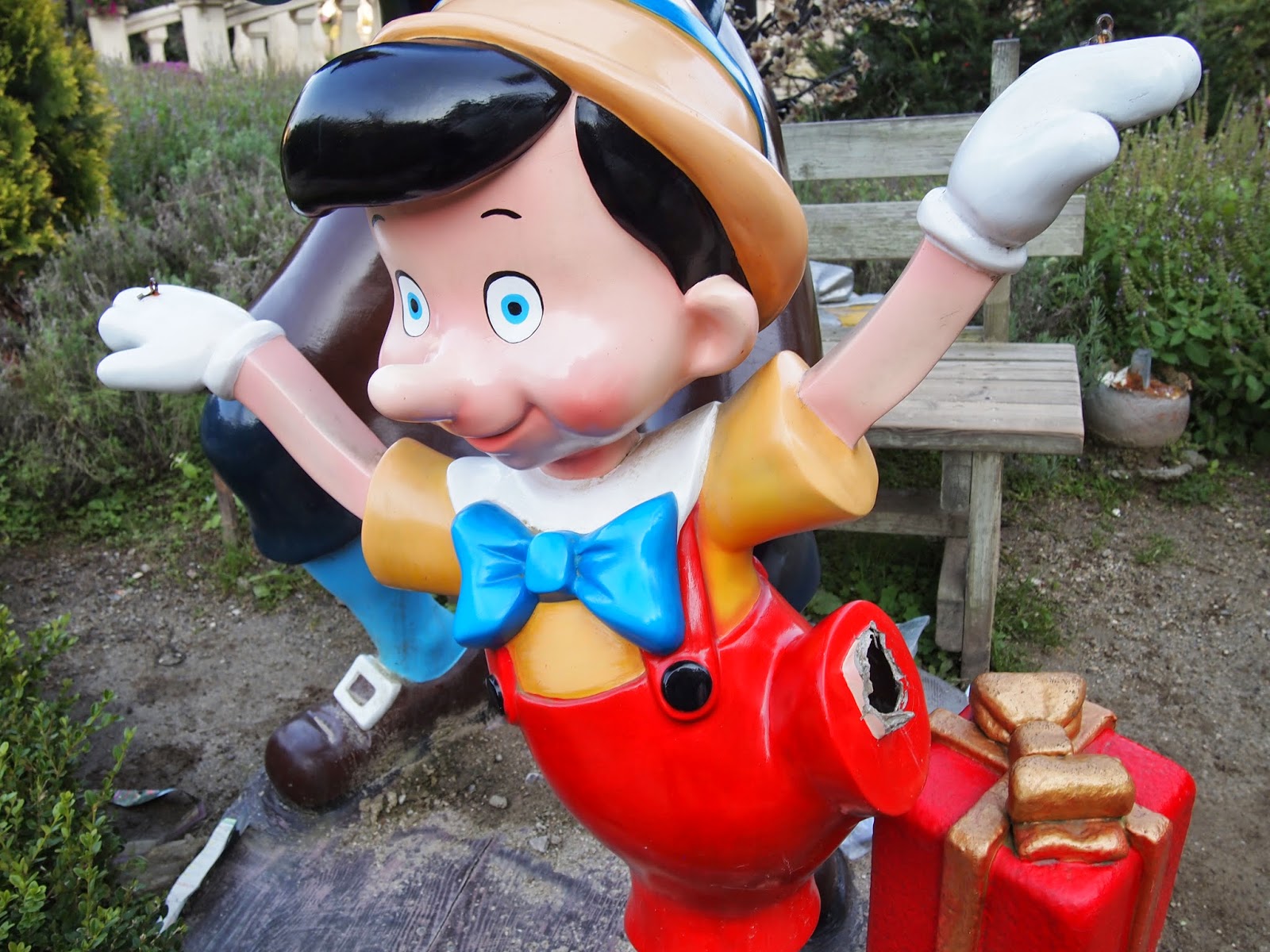 Figuring a bite to eat would settle my nerves, I ducked into the Herb Galbi Restaurant, one of the park’s eateries that features fresh ingredients grown on Herb Island.  The restaurant, blanketed in silk flowers and Tiffany lamps, attempted to mimic a classic European restaurant.  Yet, despite its efforts, which also included waitresses donned in beer wench dresses, felt unnatural and awkward.  Still, the ddukbaegi bulgogi (beef stew) was good and the banchan (side dishes) were fantastic, particularly the pickled chili peppers.  Other items on the menu included herb bibimbap, herb galbi (ribs) and herb salads.  All meals are served with a calming cup of herbal tea.  So calming, in fact, that I was ready to explore more of the park after lunch. 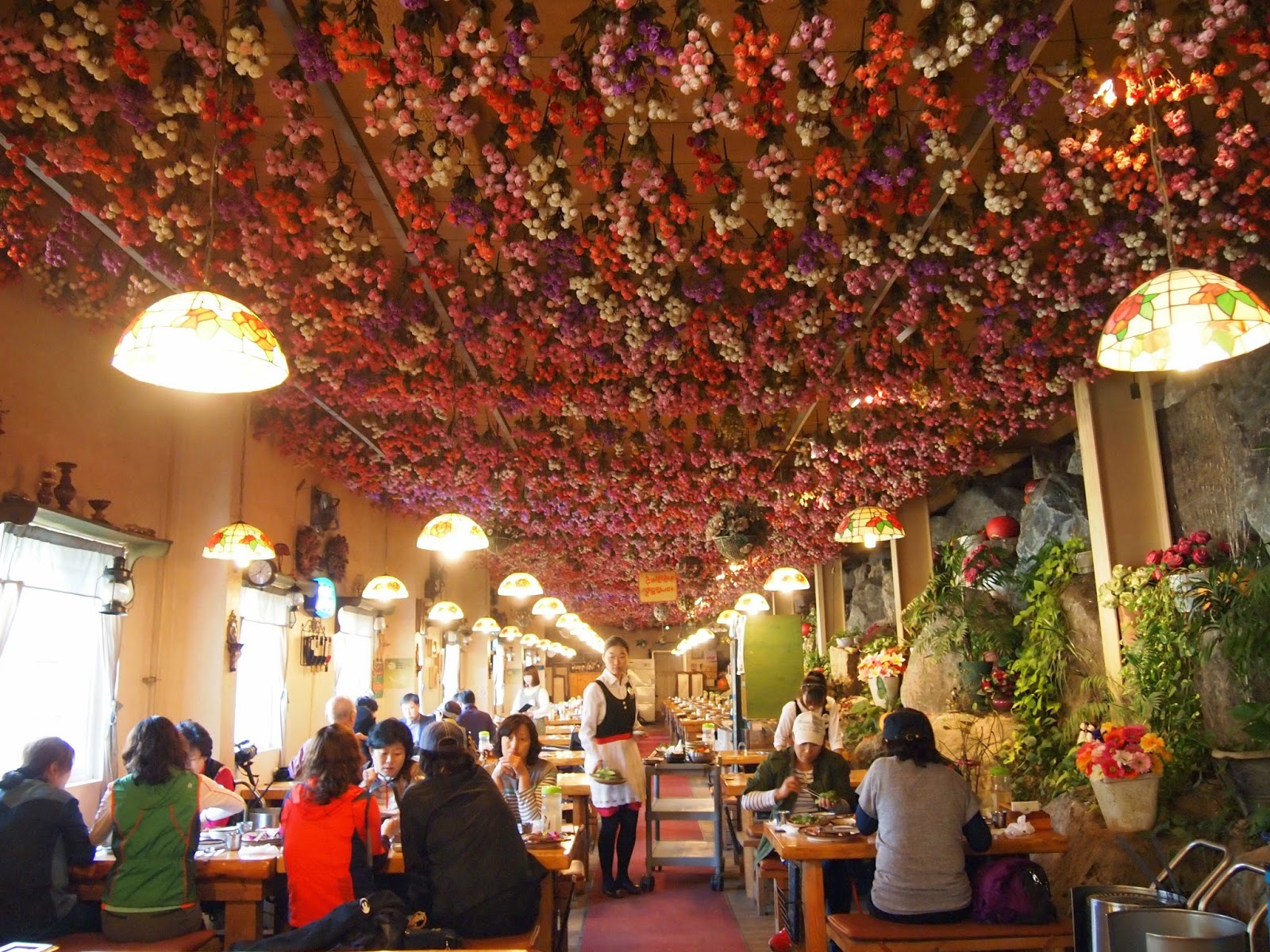 I let my senses guide me to an impressive European style building which functions as a hotel and luxury spa. It was off-limits to non-guests like myself but the lobby was pretty, complete with Romanesque statues and a colorful ceiling fresco.  The herbal products used in the spa services are also apparently grown on the “island.” There were a number of gingerbread-like guesthouses and a fancy Mediterranean-themed wedding hall nearby. 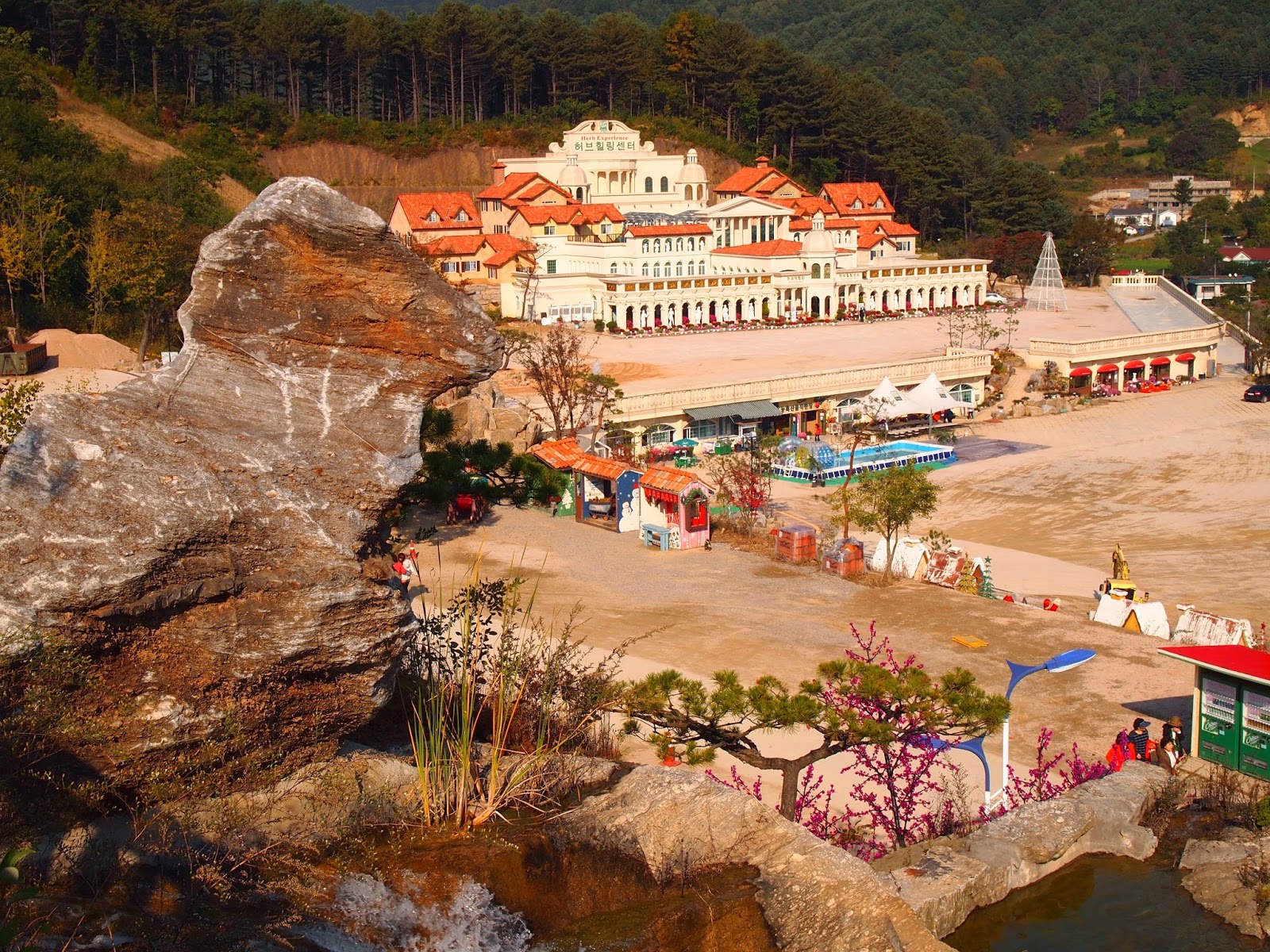 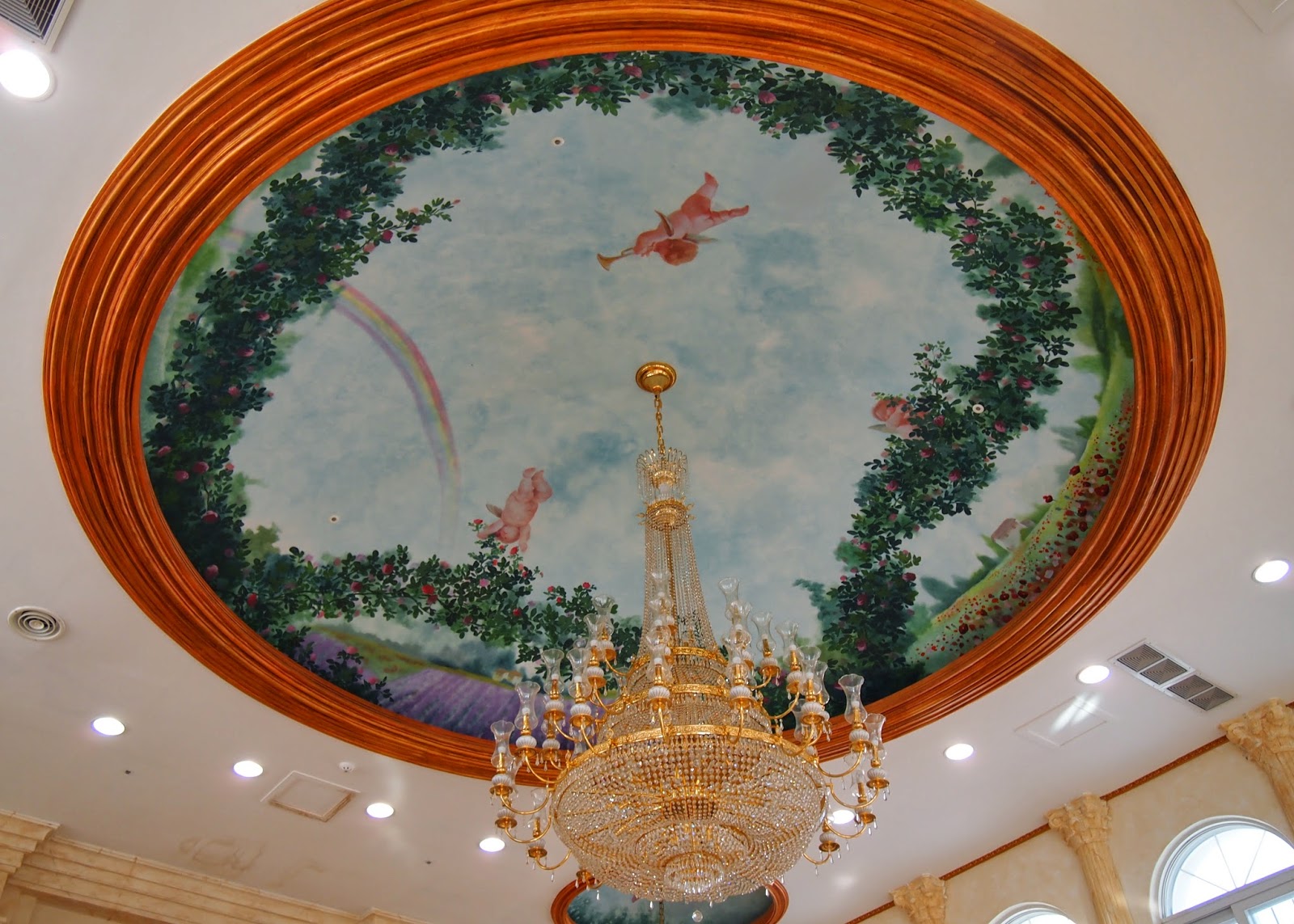 Although I was visiting during the off-season, I was told that there are many entertaining performances at the “Venice” district in the warmer months.  The area’s gondola is also popular with children.  Attached to the circular waterway are a number of towers to be explored, including a witch’s lair and makeup room, both of which exist solely for photo ops.  The workshops attached to the towers, however, were more interesting.  Here, locals make a number of products using herbs, and visitors can also try their hand at crafting some of the goods. 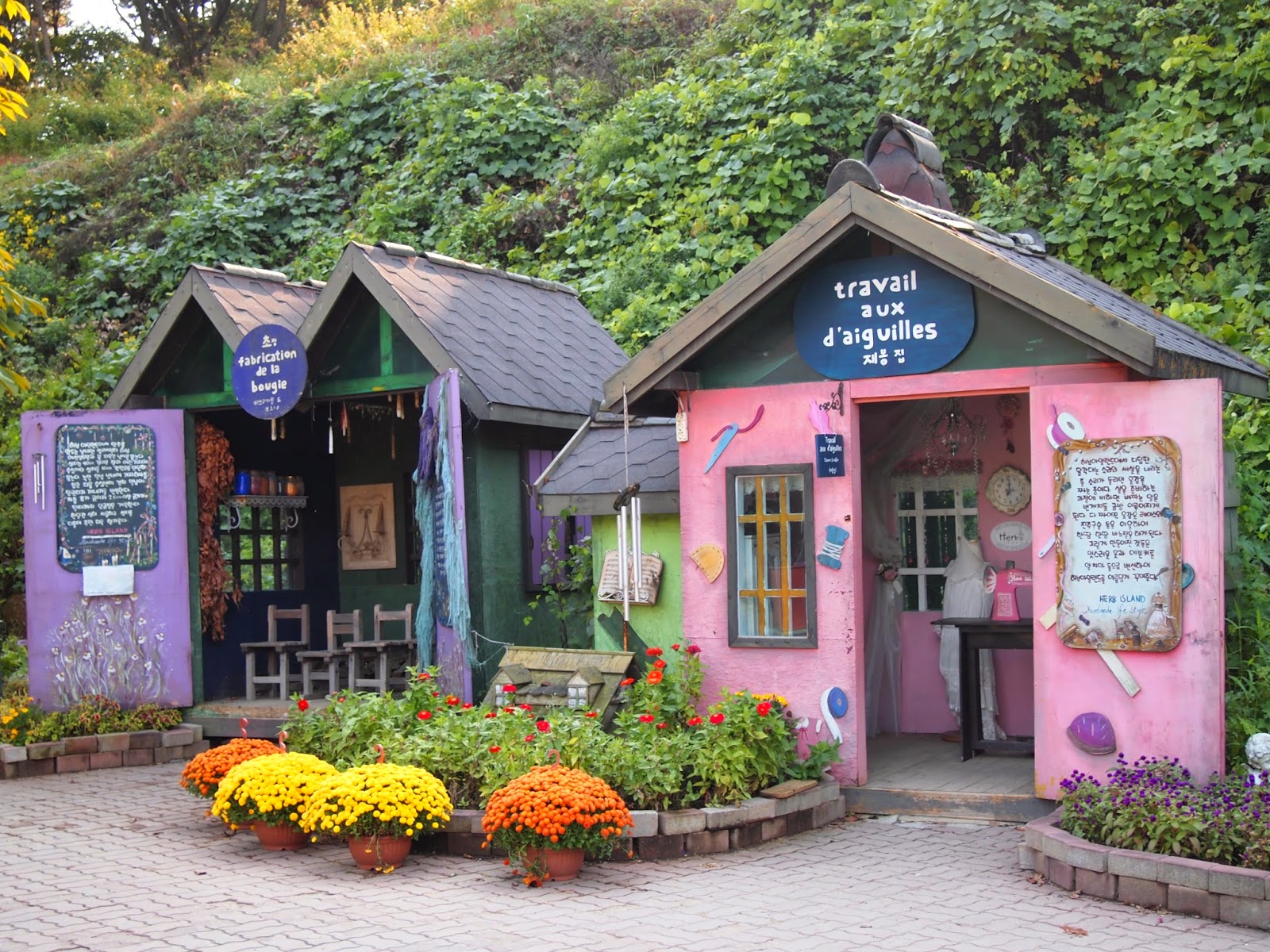 The highlight of the park, in my opinion, is the greenhouse, which boasts a plethora of plants, herbs, flowers and trees.  The bright colors, sweet aroma of the flowers and the sound of rushing water from the fountains made it the most relaxing and enchanting destination of Herb Island.  Although not all the plants were in bloom, I imagine the greenhouse is especially impressive in the spring.  Keep an eye out for a strange looking creature buzzing about the flowers.  I can only describe it as a flying shrimp with wings so fast they can’t even be seen. The Koreans seemed to be just as mystified as I was with this little thing… still not quite sure what it was exactly. 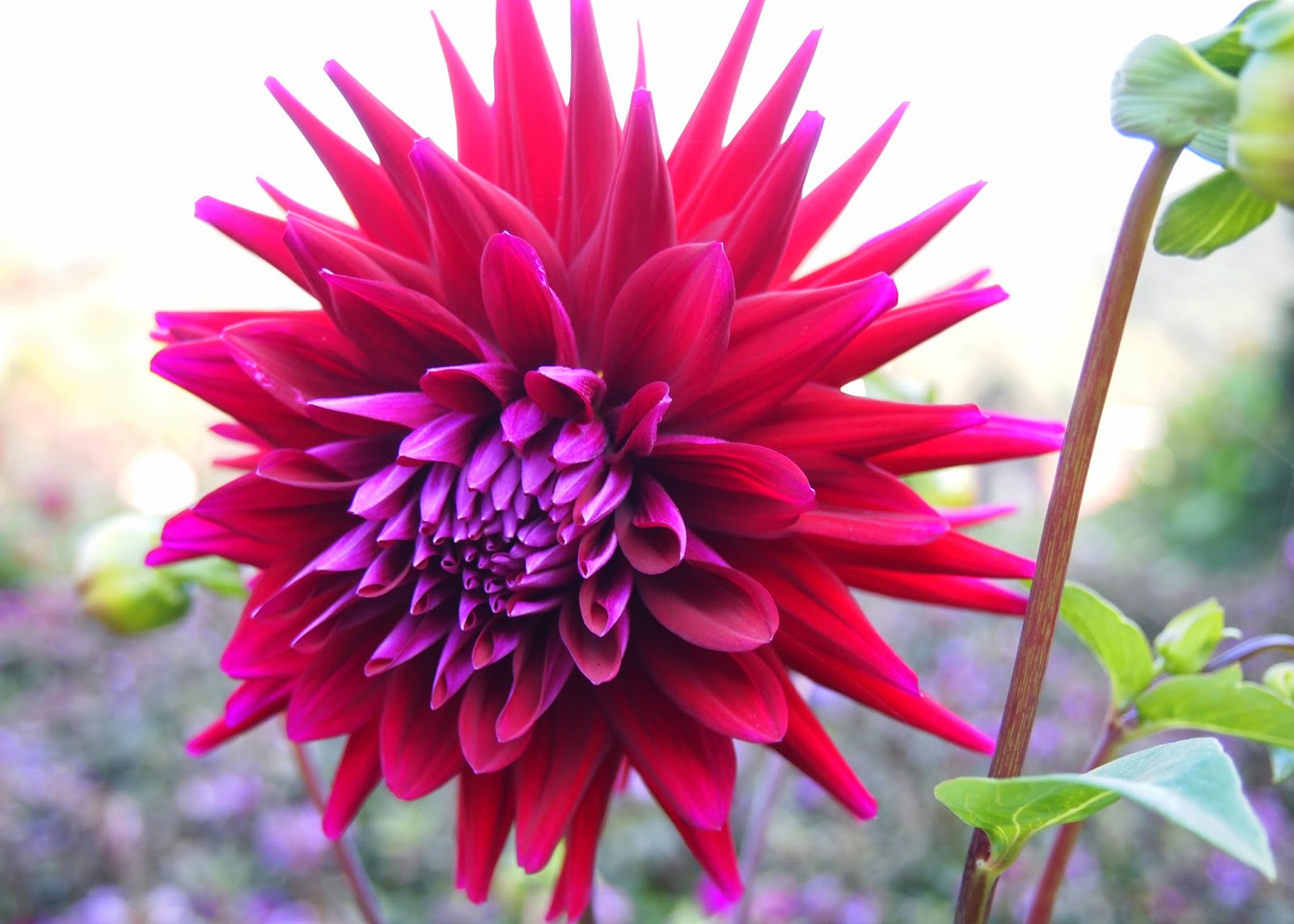 Just as I was beginning to develop a fondness for the place, I found a door that led behind the greenhouse into Santa Land, hands down the strangest part of Herb Island.  Hundreds of neglected Santa statues stood in different poses along a barren path.  A few of them appeared to have had too much soju, as their clothes had fallen off and menacing smiles stretched across their faces. 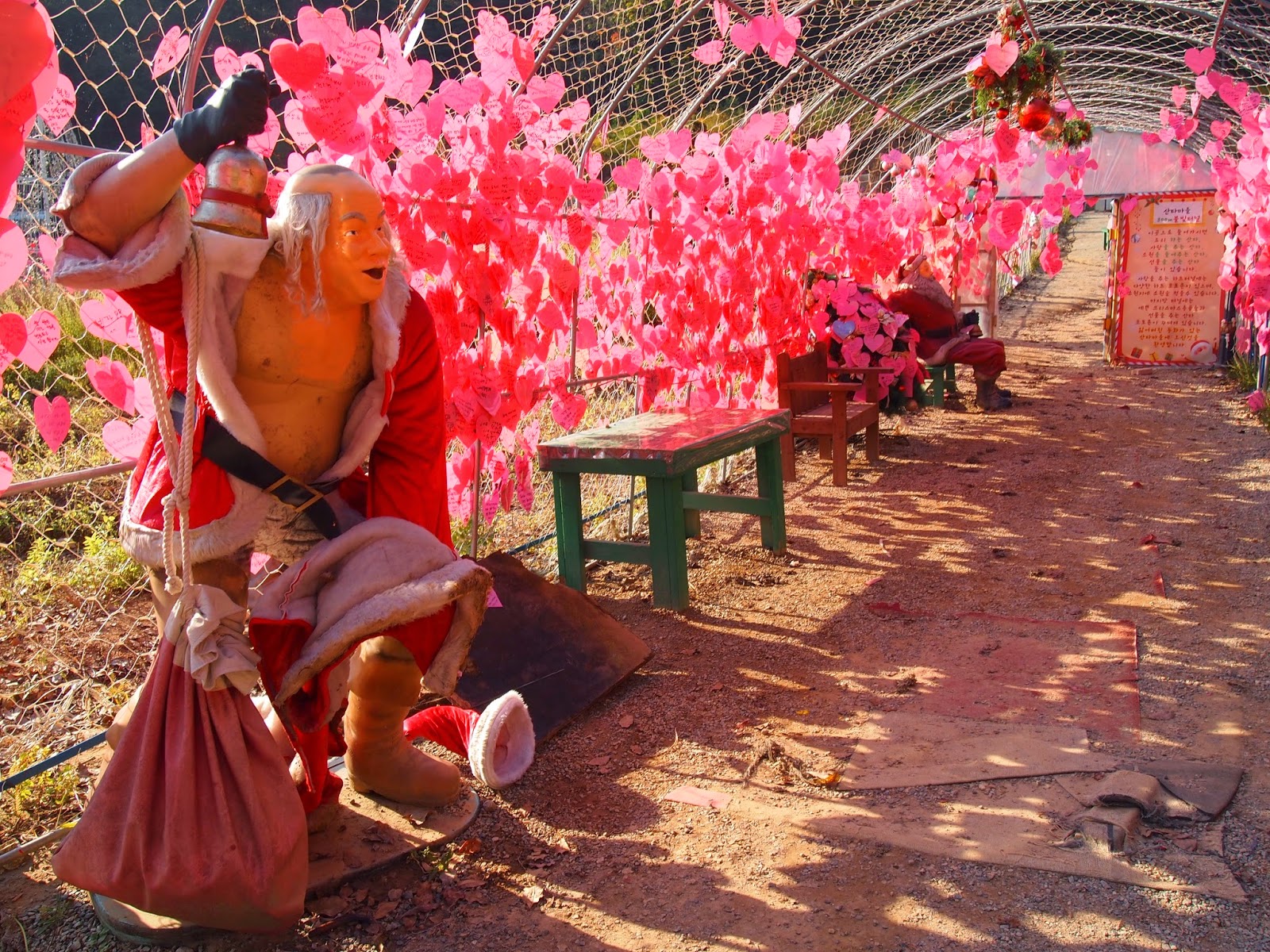 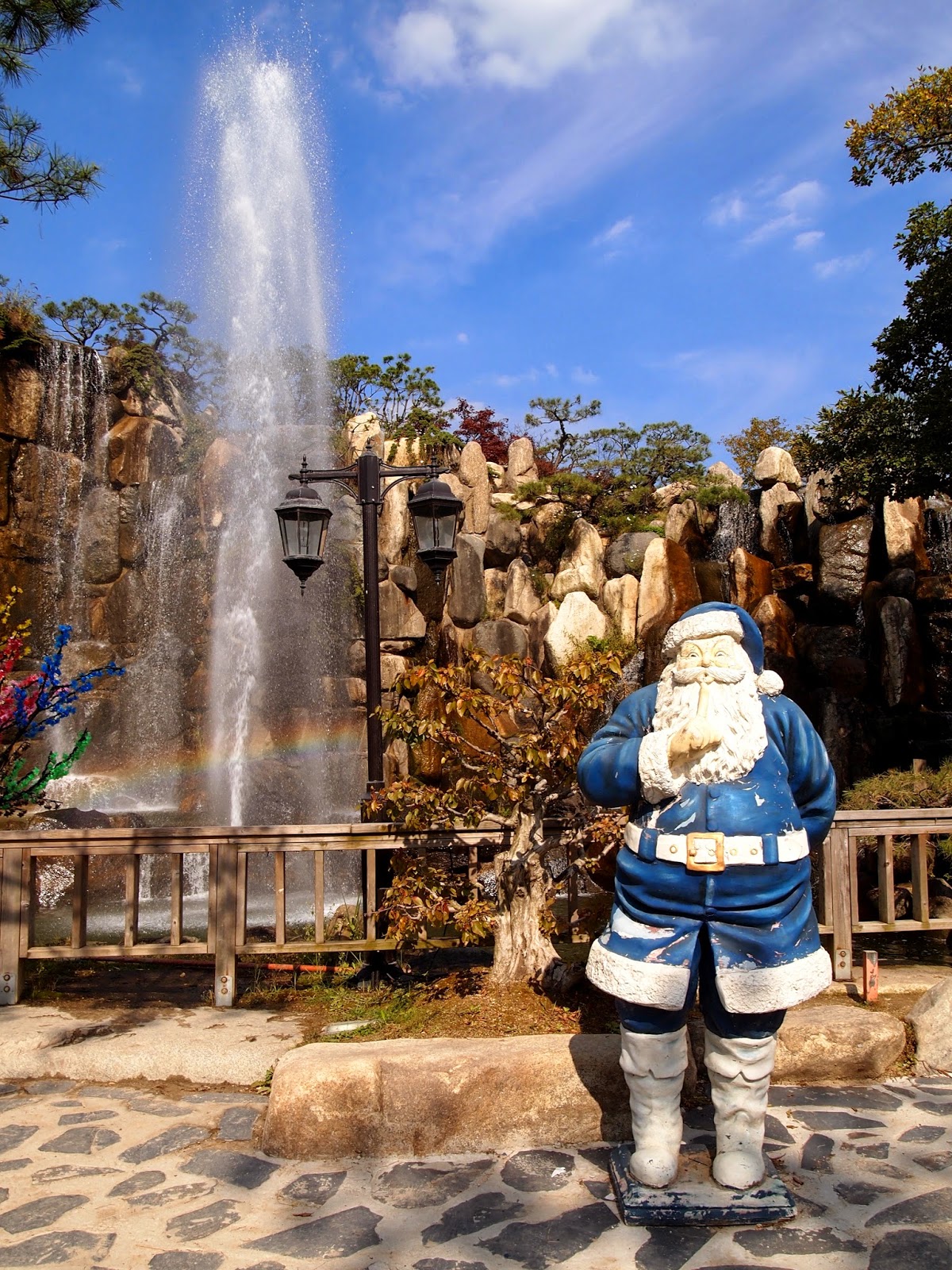 After the Santa encounter, I decided it was time to head back to Seoul, but not before sampling the bread at the Herb Bakery and perusing the park’s gift shops, which were surprisingly nice and not overly expensive.

I’m still a bit confused as to what Herb Island actually is.  The concept is inconsistent, the park itself is in need of some major renovations and the general vibe is a bit creepy.  Still, the air is fresh and the flowers pretty. For those that have exhausted their day trip options (Heyri Art Village, Nami Island, Incheon) and are looking for an interesting (or creepy) experience, Herb Island is worth checking out.  Especially when visited after the nearby Sansawon Alcohol Museum, which offers unlimited free samples of traditional booze. Or before a soak at the Sinbuk Oncheon, where you can use all those herbal products from the park for one of the best baths of your life.  Whichever itinerary you chose, have fun and enjoy the warm weather! Winter’s over!

Get There:  Take the Seoul subway to Soyosan Station (last stop on line 1). From the station (there’s only one exit), walk to the opposite side of the road and wait for Bus 57. Get off the bus at Samjeong-ri.  You will a sign “Herb Island 300m”. From there, follow the sign, walking straight for about five minutes, passing Samjeong Elementary School. You will find the entrance at the bottom of a hill on your left.

Tip:  Bus 57 runs from the station to Herb Island (and back) once an hour.  Be sure to check the time table at the bus station.