By Mimsie Ladner on Monday, January 29, 2018
After the end of the Korean war, Seoul, like many Korean cities, was left in shambles. Reasonably so, rebuilding efforts were focused more on practicality than aesthetics to reconstruct the city quickly and efficiently.

These days, however, Seoul’s skyline is an eclectic mishmash of contemporary architecture, from towering cement apartment complexes to eye-catching glass and steel marvels. Impressive modern buildings can be found just about anywhere in Seoul, a UNESCO City of Design, but there are a certain few that I think visitors should keep an eye out for while exploring the city. Check them out below.

As one of Seoul’s most eccentric modern architectural complexes, the Dongdaemun Design Plaza (DDP) is without question the heart of all things design in South Korea. Designed by the late architect Zaha Hadid, the building takes on flowing forms with dynamic lines of light and a distinct Hadid style.

Appealing to young trendsetters with its wide range of attractions, the neo-futuristic structure is a one-stop-shop for food, shopping, and entertainment. The DDP hosts international events such as the bi-annual Seoul Fashion Week; showcases of renowned fashion brands such as Louis Vuitton and Chanel; and art exhibitions featuring the works of Alessandro Mendini, Paik Nam-June and Kim Young-Won, among others.

From above, it’s difficult to distinguish just what Ewha Womans University’s ECC actually is. This is because the ingenious complex designed by French architect Dominique Perrault is mostly underground. Despite this, the entire interior of the building is spacious and full of light. Merging architecture with landscape, Perrault created a functional yet tranquil space to study. Or to enjoy one of the many facilities the building has to offer: an indie cinema, a fitness center, cafes, and boutiques.

Get There: Ewha Womans University Station, Exits 2 and 3. 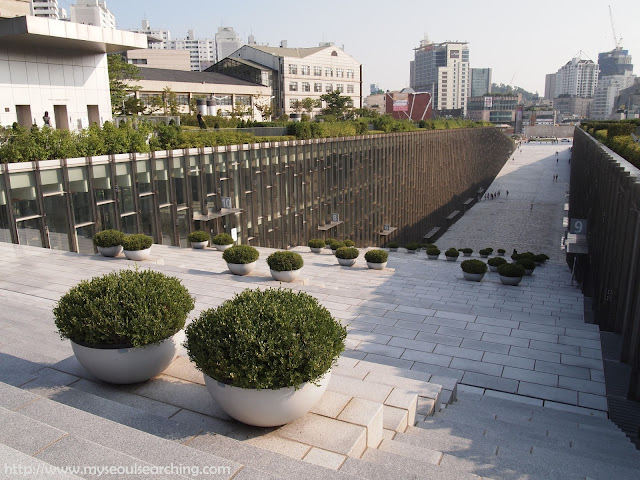 As the tallest building in Korea – and one of the top 10 tallest in the world – the 555-meter-tall Lotte World Tower is a monument to Seoul’s skyline. The sleek tapered form of the 123-story building stands out from the Korean capital’s rocky mountainous topography, and is organized around a stacked mixed-use program, housing retail, office and residence facilities along with a 7-star luxury hotel.

The design of the structure marries a modern aesthetic with forms inspired by traditional Korean ceramics, porcelain and calligraphy. Incorporated into the design are a number of sustainable design strategies such as photo-voltaic panels, wind turbines, external shading devices and water harvesting systems.

The tower is also home to a skywalk and an observation deck, making it one of the best spots to take in the stunning view of Seoul’s vibrant city lights. 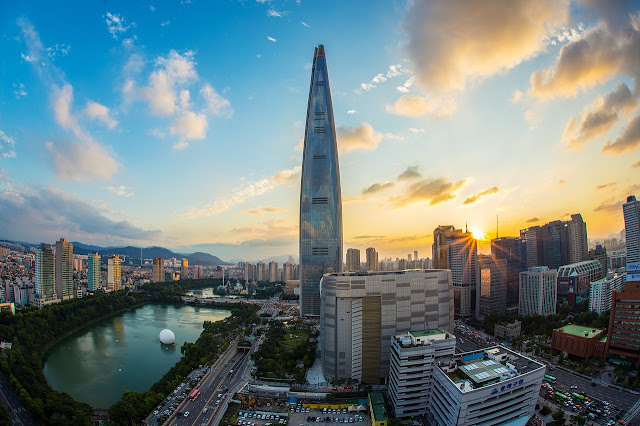 The Seoul Central Post Office, also known as Post Tower, was designed by the Space Group, Korea’s leading modern architectural firm. Resembling a giant unzipped zipper, it’s an unusual contrast to the European-style water fountain and Bank of Korea building that stand directly across from it. Post Tower is especially impressive at night, when it is illuminated in lights of every color.

Undoubtedly the most famous private art gallery in Korea’s capital, the Leeum Samsung Museum is a must-visit for all art aficionados.

Museum 1 was designed by Maria Botta, who incorporated patterns of traditional Korean architecture into the building’s design. The citadel-esque structure secures some of Korea’s most prized works, including Buddhist art, paintings, metalwork and calligraphy. The works are centered around an eye-catching rotunda that emulates Korean pottery while soft lighting adds a sense of sacredness to the collection.

With its glass walls, blocky structure and rusted stainless-steel materials, Jean Nouvel’s Museum 2 anticipates the contemporary pieces housed inside it. A more generous use of natural light complements the modern distinctiveness of the permanent exhibits. Both international and Korean contemporary works are displayed.

Initiated by the Seoul Metropolitan Government, Some Sevit (aka Floating Islands) are part of the city’s “Han River Renaissance,” a scheme intended to stimulate Seoul’s water landscape.

New York’s H Architecture and Seoul’s Haeahn Architecture collaborated and won a design competition to create the floating islands that have since their construction become a cultural icon of the Korean capital.

The design concept of the islands represents the stages of a blooming flower: a seed, bud and blossom. Each structure takes on the form of one of these stages, manifesting as delicate yet eye-striking formation of glass, wood and steel. The islands contain several cultural, educational and recreational functions, and are a popular venue for many featured events in the city. 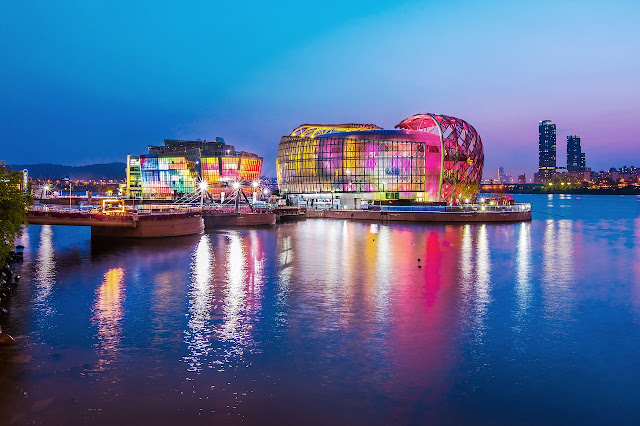 Standing over central Gangnam like a giant cheese grater, the “Urban Hive” is one of the more memorable buildings south of the Han River. Having been erected one floor at a time and entirely from concrete rather than with interior columns or a steel-framed foundation, the building set a new precedent for skyscraper construction in Korea.

The architect, Kim In-chul, also placed much emphasis on the human element when planning the Urban Hive. Included in his award-winning design are a rooftop garden and 3,371 window-like holes that each offer a unique view of the cityscape.

Get There: Sinnonhyeon Station, Exit 3

Completed in 2012, Seoul City Hall is arguably one of the most futuristic buildings on this list. Situated just behind the former Japanese-constructed City Hall and overlooking Seoul Plaza, the building’s facade, made of solar panels and special UV filtering glass, appears as a tsunami-like wave. Despite the controversy this coincidence created in regards to Korean-Japanese relations, it’s unquestionable that the building’s design and functionality are extraordinary. 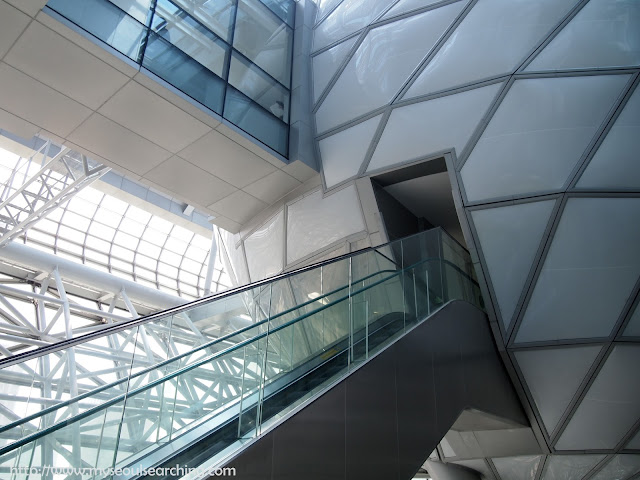 The building’s interior is an interesting and somewhat mind-boggling combination of jungle and outer-space. Escalators ascend into spaceship-like pods, installation art pieces of plastic tubing and balloons hang from the ceilings and live plants crawl up the walls.
Get There: City Hall Station, Exit 5 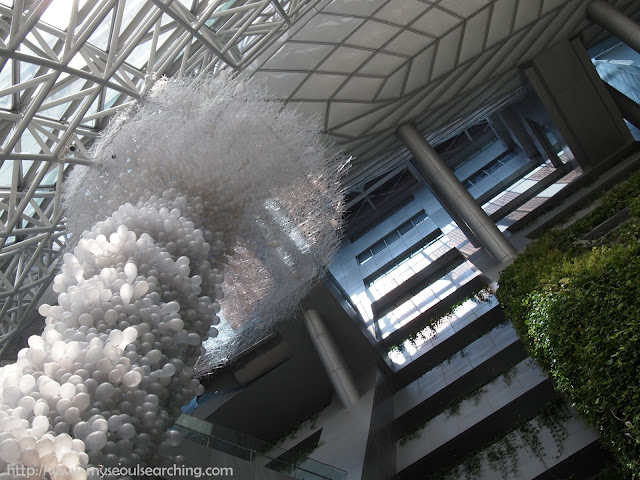 Located near Hongik University, one of Seoul’s top design schools, Sangsangmadang is an intriguing building that entices passersby with its imaginative facade: a curvy steel frame over an 11-story glass structure.

Although this building is impossible to miss from the outside, many often don’t realize that it’s interior is also worth checking out. The unique complex houses a cinema, a performance hall, a contemporary art gallery and a shop that sells fun and funky products designed by Korean artists.

Get There: Hongik University, Exit 9.

Built in 1999, the Jongno Tower isn’t the newest building on this list, but it is certainly one of the most recognizable. Towering 433 feet over downtown Seoul, the structure resembles a hovering UFO more so than what it actually is: a 33-story office building. Situated on its top floor is Top Cloud, an upscale restaurant and bar that offers diners a spectacular 360-degree view of the city in addition to live musical performances.

Get There: Jonggak Station, Exit 3 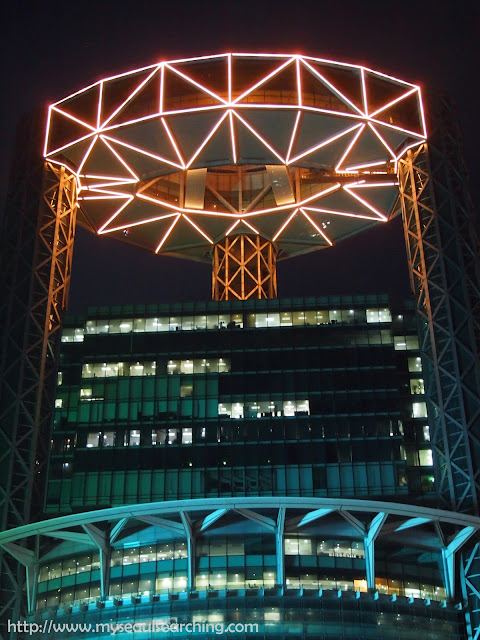 Words by Mimsie Ladner of Seoul Searching. Content may not be republished unless authorized.