A Luxurious Staycation at Conrad Seoul

By Mimsie Ladner on Friday, October 24, 2014
In recent years, Seoul has seen a dramatic increase in the number of accommodations offered throughout the city. With so many choices, finding the right place to stay can seem daunting to tourists, business travelers and even expats. For those seeking opulence without compromising location, Conrad Seoul, the luxury brand of Hilton Worldwide, is the perfect choice.

Although not a tourist, I occasionally treat myself to a staycation in the city- an opportunity to escape the monotony of everyday life and to recharge my batteries. After a recent chaotic week of work and ridiculously long hours, I knew one was in order and the rave reviews of the Conrad had me curious. As I took the short drive from the center of the city toward the Yeouido business district, the mere sight of the hotel’s gleaming black exterior towering over the Han River put me at ease.

Upon entering the lobby, it was easy to see that even after two years, the Conrad had maintained that just-opened feel. The first thing I noticed was the ginkgo leaf motif- a symbol I’ve come to associate with autumn in Korea. I would continue to notice the leaf integrated into the hotel’s design, from the golden sculptures hanging from the lobby’s high ceilings to the embossed designs of the restaurants’ menus to the subtle patterns in the carpet. This delicate incorporation of nature into a very modern structure with impressive views of the sprawling Seoul metropolis was a nice balance. 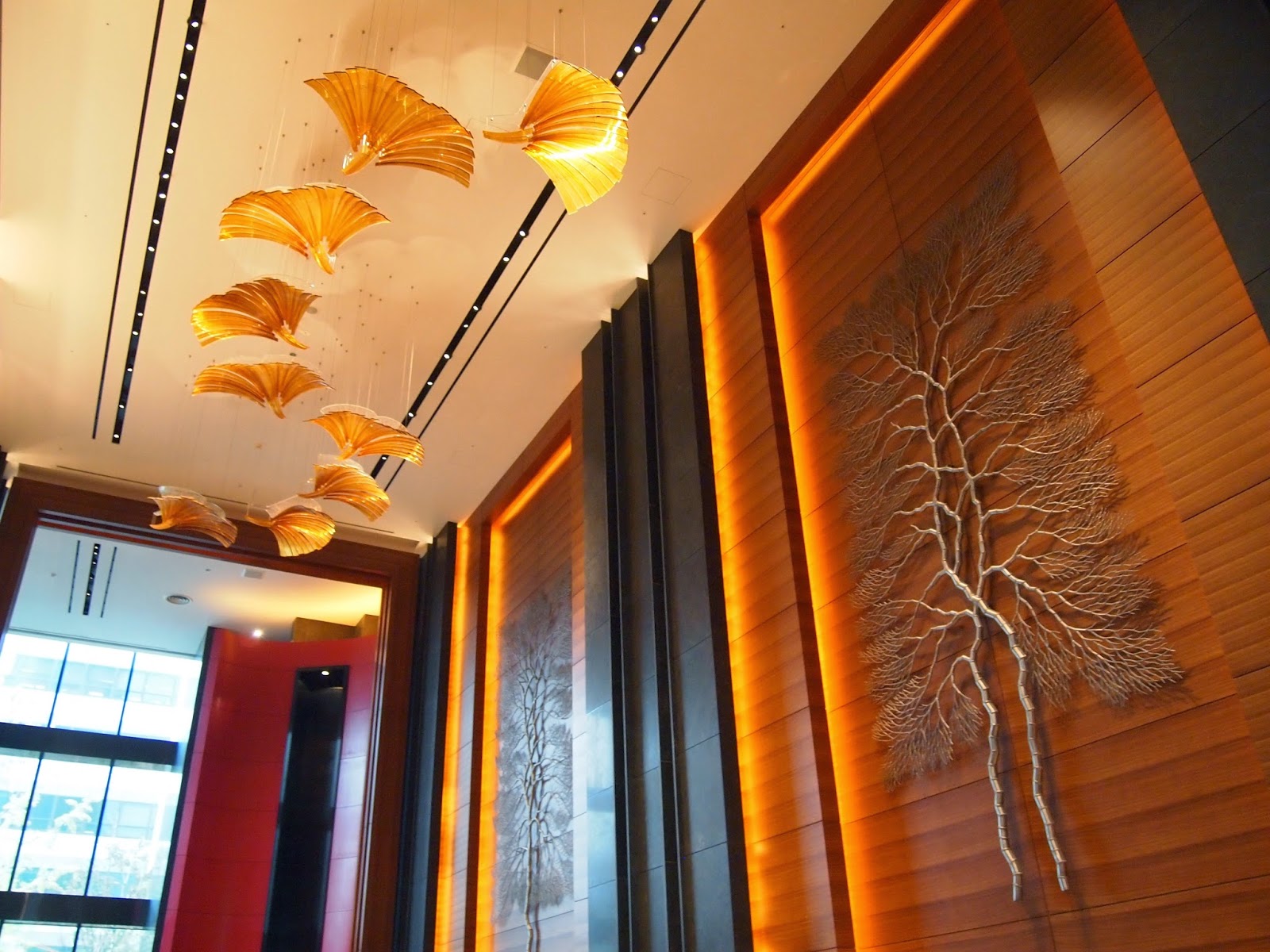 I was greeted kindly by the hospitable receptionist and after checking in, took the elevator to my deluxe room on the 17th floor. And deluxe it was. I was greeted by a great view of the Han River, which looked stunning even under a gray sky. The room, with its warm earth tones and soft lighting, created an atmosphere of undeniable comfort, certain to ease the minds of the weariest of guests.

What really struck me as impressive was the technological flair the room possessed. My favorite object was the touchpad control within arm’s reach from the two queen beds on either side of it. Here, guests can change the room’s temperature, adjust the lighting and control the blinds with a touch of a button. Which worked in my favor, considering how much effort it took me to pull myself up from the lavish bed and 300 thread count sheets. 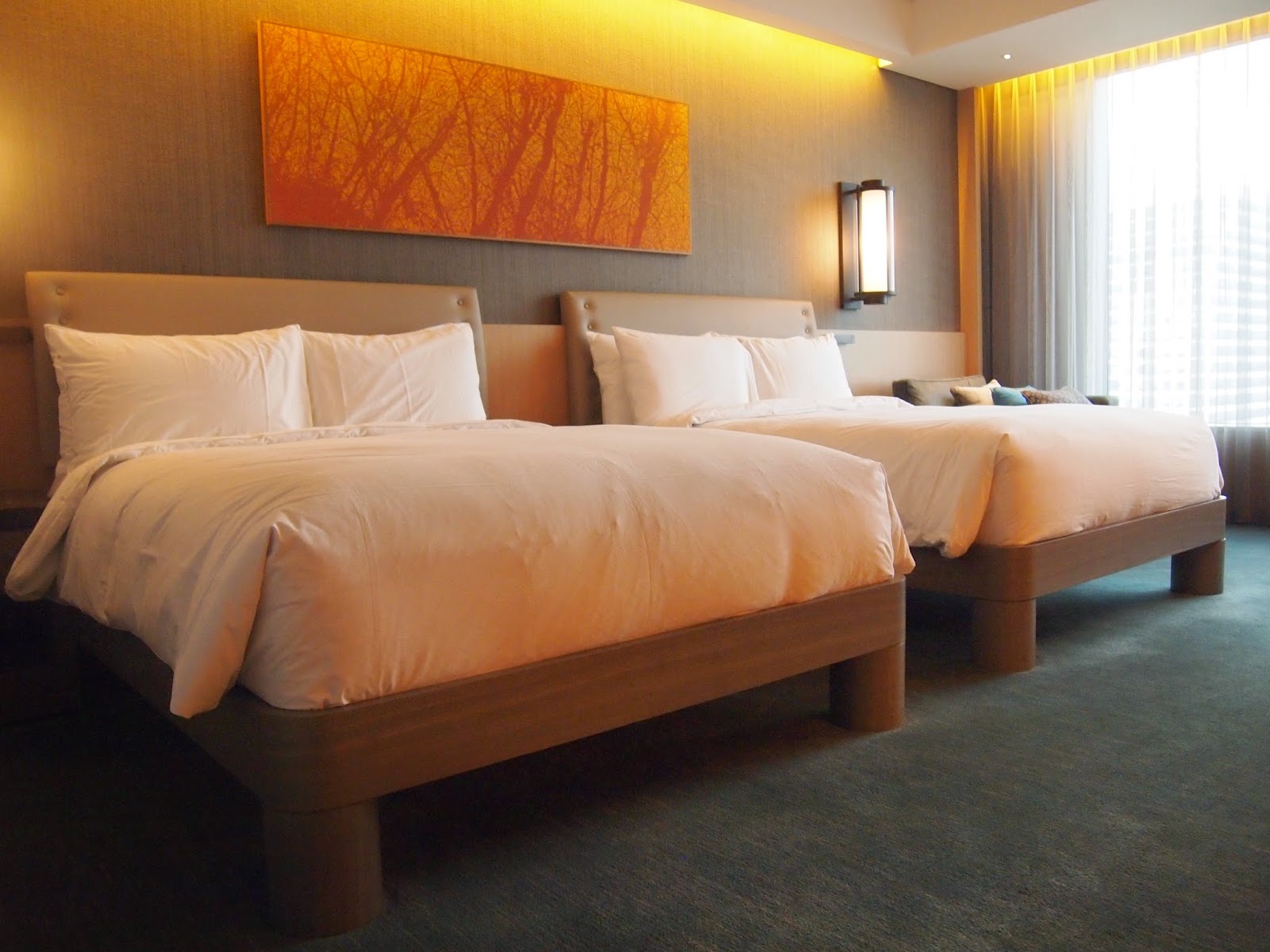 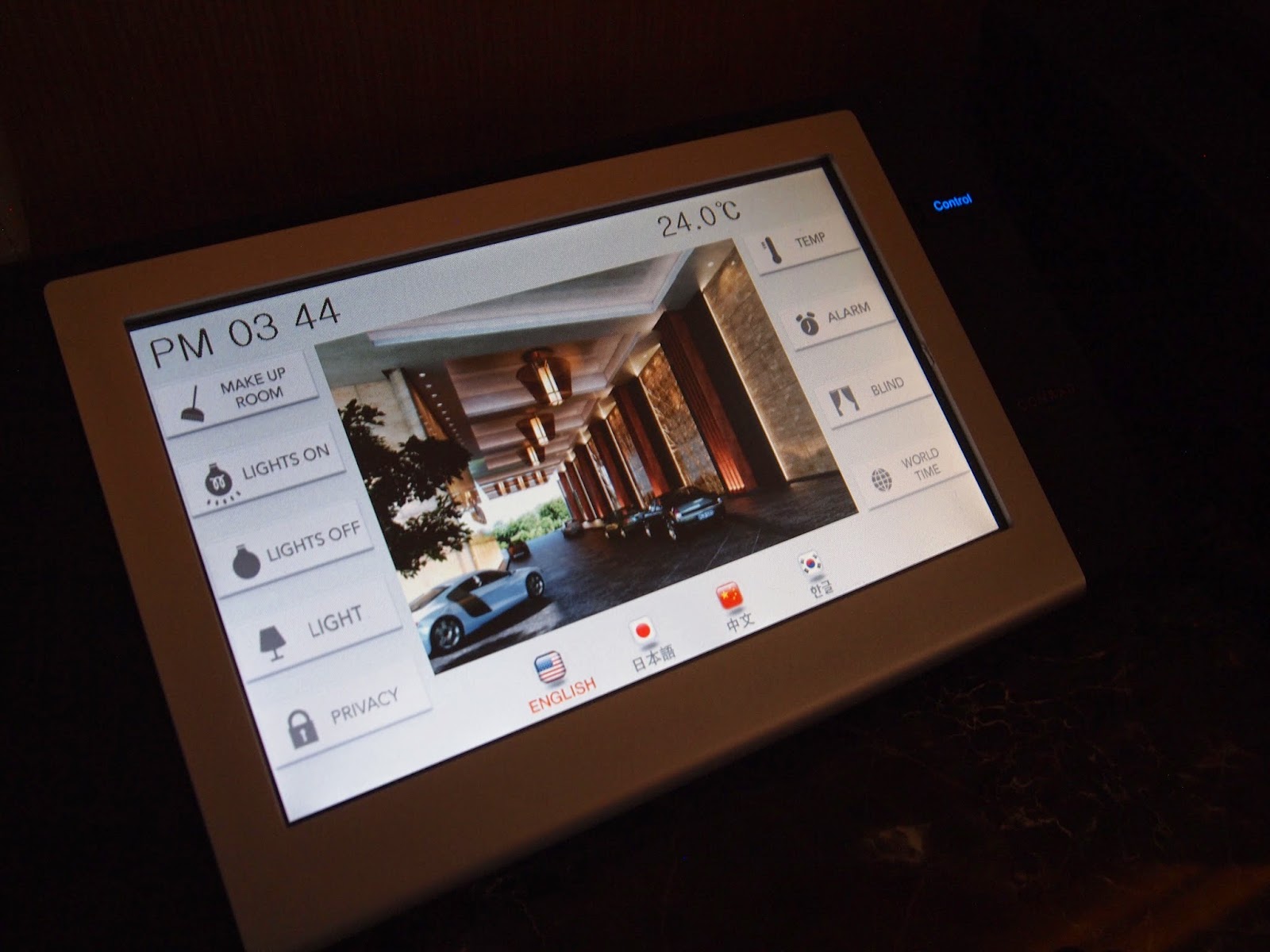 The bathroom was just as smart, with magic glass that allows guests to make the window that looks into the bedroom opaque with the flip of a switch. Another cool feature was the small TV installed in the bathroom mirror; unfortunately, it’s not positioned well enough to watch while taking a hot bath, as I would later learn. 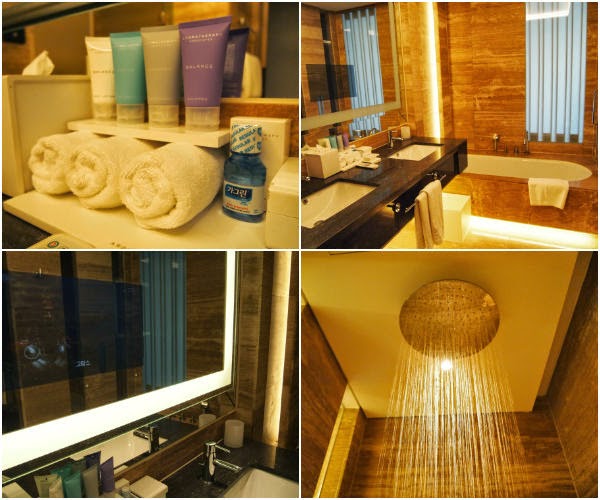 I had reservations to visit the Conrad’s acclaimed Italian restaurant, Atrio, and as is usually the case when feeding time is involved, I wasn’t a minute late. Again, I was greeted with the utmost of cordiality and was taken to a table that overlooked the streets of Yeouido, which had slowed down significantly since the afternoon. The restaurant was spacious and dimly lit by a contemporary chandelier.

I ordered the restaurant’s Olive Set, a four-course dinner of Atrio’s best dishes. The meal began with a basket of scrumptious breads, made fresh at the brick oven near Atrio’s entrance. Bread is always my weakness but I managed to keep myself from inhaling it all at once, which ended up being a good idea, considering the portion sizes of the following courses. 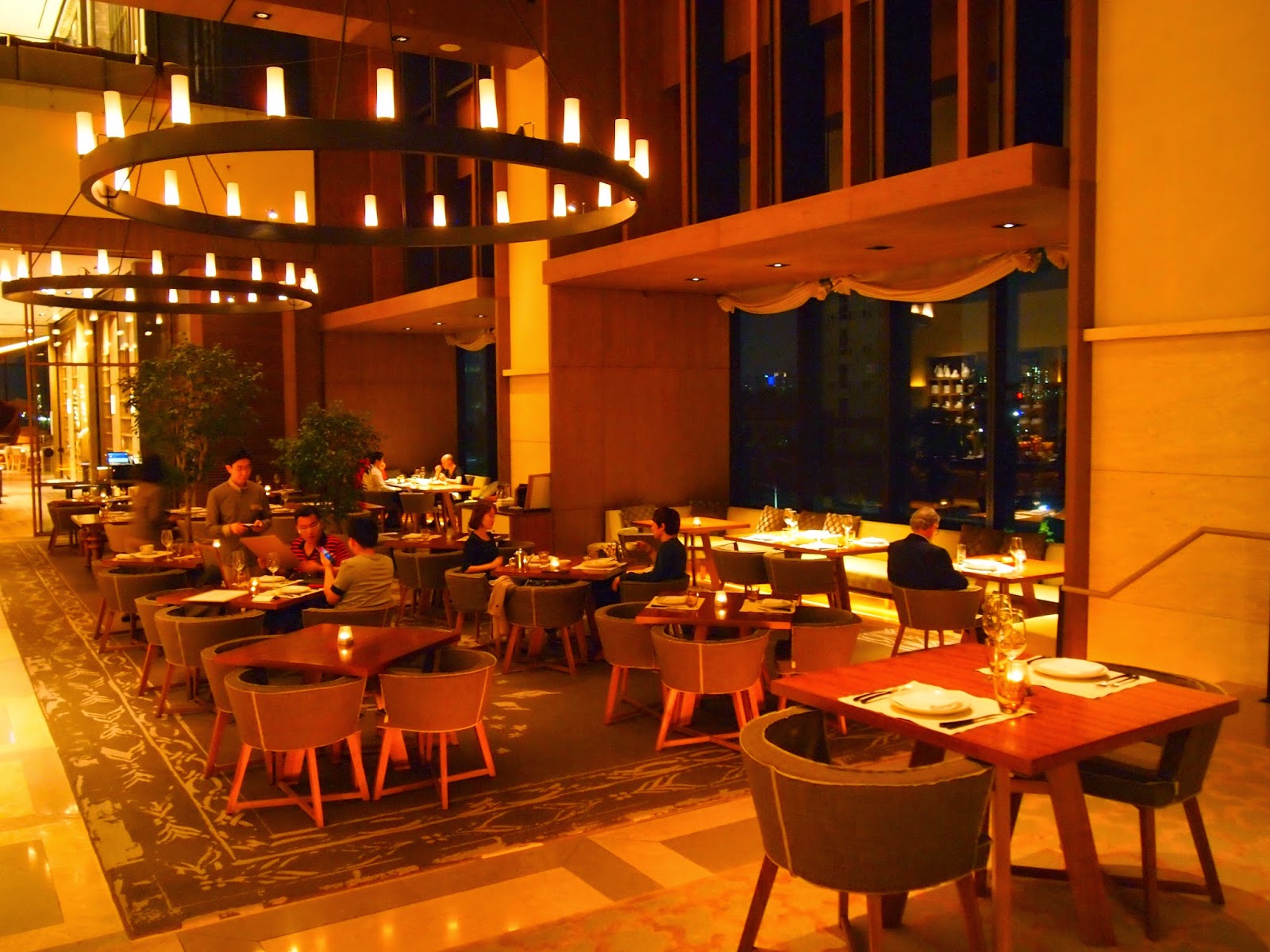 First was a dish of 12 month-aged prosciutto with sliced fresh figs, rucola and triangles of provolone, a perfectly balanced combination that was an instant winner in my book. It went especially well with the vintage Italian red recommended by the waiter at my request. Next up was a buttery linguine mixed with clams, broccoli and garlic that had a nice kick to it. 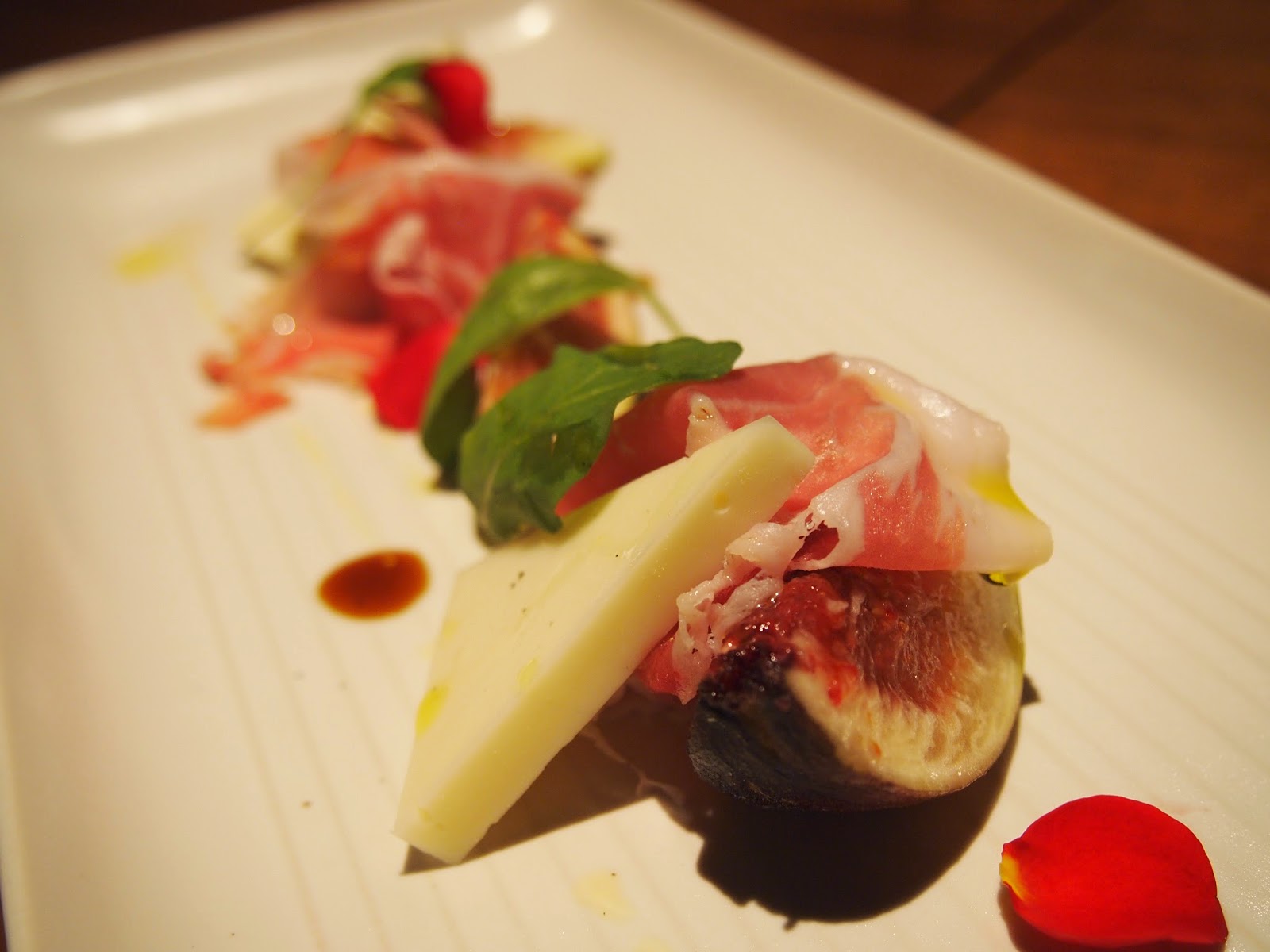 Guests can chose between sirloin or sea bass as an entree and my friend and I ordered differently so we could try both. I wished I had ordered the sirloin medium rare instead of medium, as it was a bit dry for my taste but the flavor, enhanced by a Chianti jus, was great. I preferred the sea bass, which was served over a bed of Sardinian fregola, clam, squid and black olives. It was the first time I had tried fregola, which are essentially tiny balls of chewy pasta, and loved the texture. It was a great match for the tender sea bass which was cooked with saffron and onion. 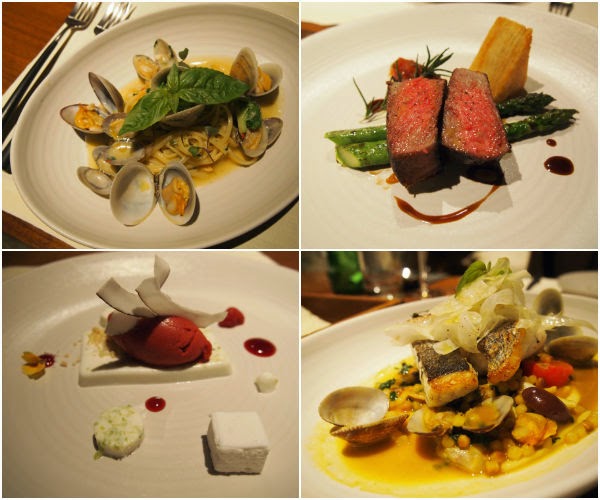 Dessert was a beautifully plated lime and coconut panna cotta topped with a scoop of tangy raspberry sorbet and coconut chips. The flavors reminded me of the key lime pie I often ate as a kid on vacations in Florida and the playful shapes and colors used in the dish only enhanced these feelings of childhood. Overall, the meal was excellent and though a bit pricier than the majority of Seoul’s Italian restaurants, the atmosphere and portion sizes made it a good value. I left comfortably full and remain eager to return for the happy hour specials in the near future.

Despite my bulging belly, I wanted to take advantage of the Conrad’s pool before it closed so I donned a swim cap (an annoying must in most swimming pools in Korea), and hopped into the illuminated waters. It was a bit chilly but enclosed in glass, making it swimmable throughout the year. Divided into lanes, it functions more so as an exercise facility rather than one for leisure but there was almost no one in the pool so it wasn’t a problem. 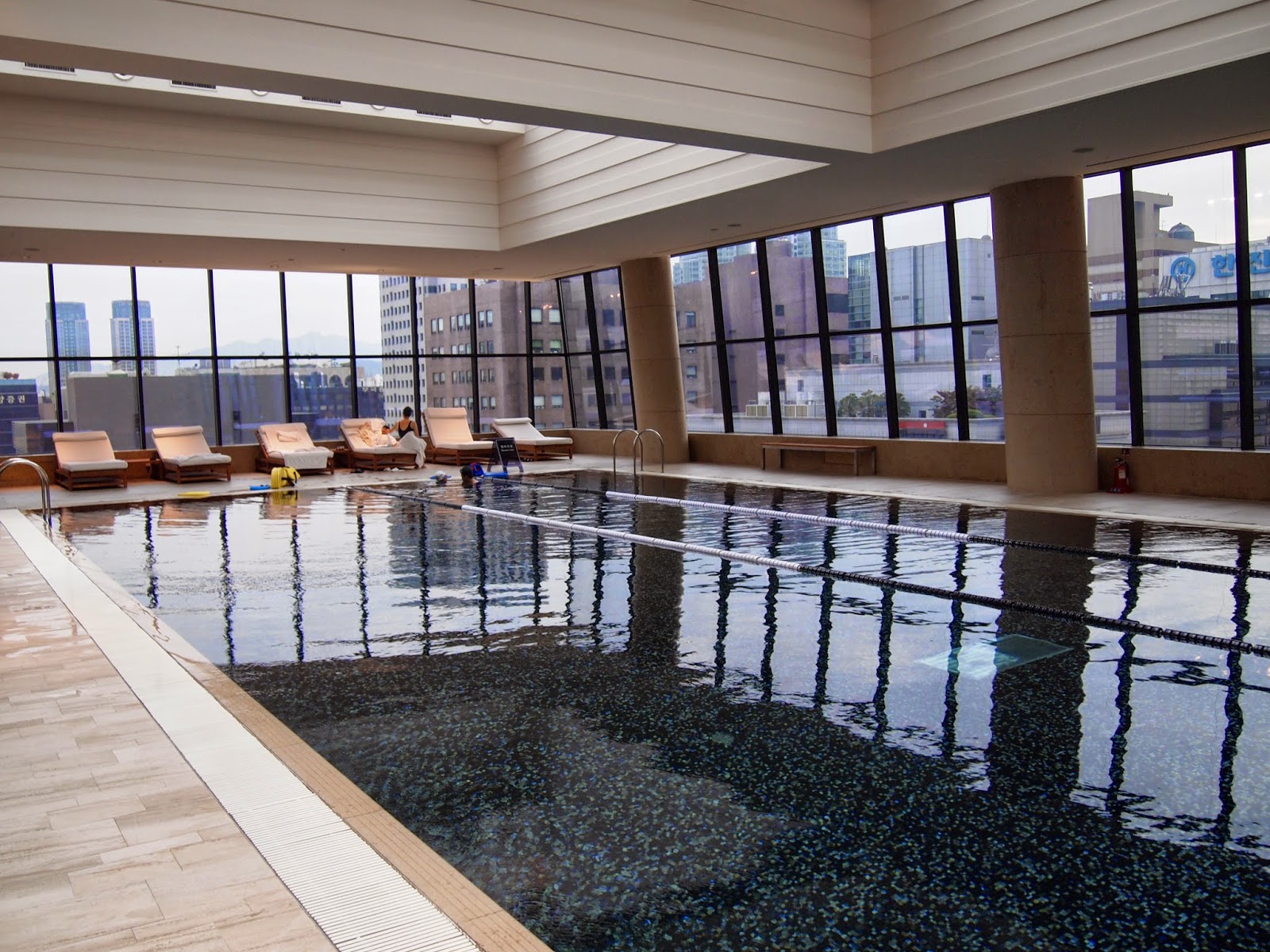 My friend and I then headed back up to our room, too exhausted to check out the gigantic IFC mall in the basement or the parlor-esque bar on the 37th floor, and instead opted for drinking beer (the mini-bar is well stocked and gorgeous) and Walking Dead. The TV had a good selection of channels to accommodate a number of languages, on-demand movies and even video games. 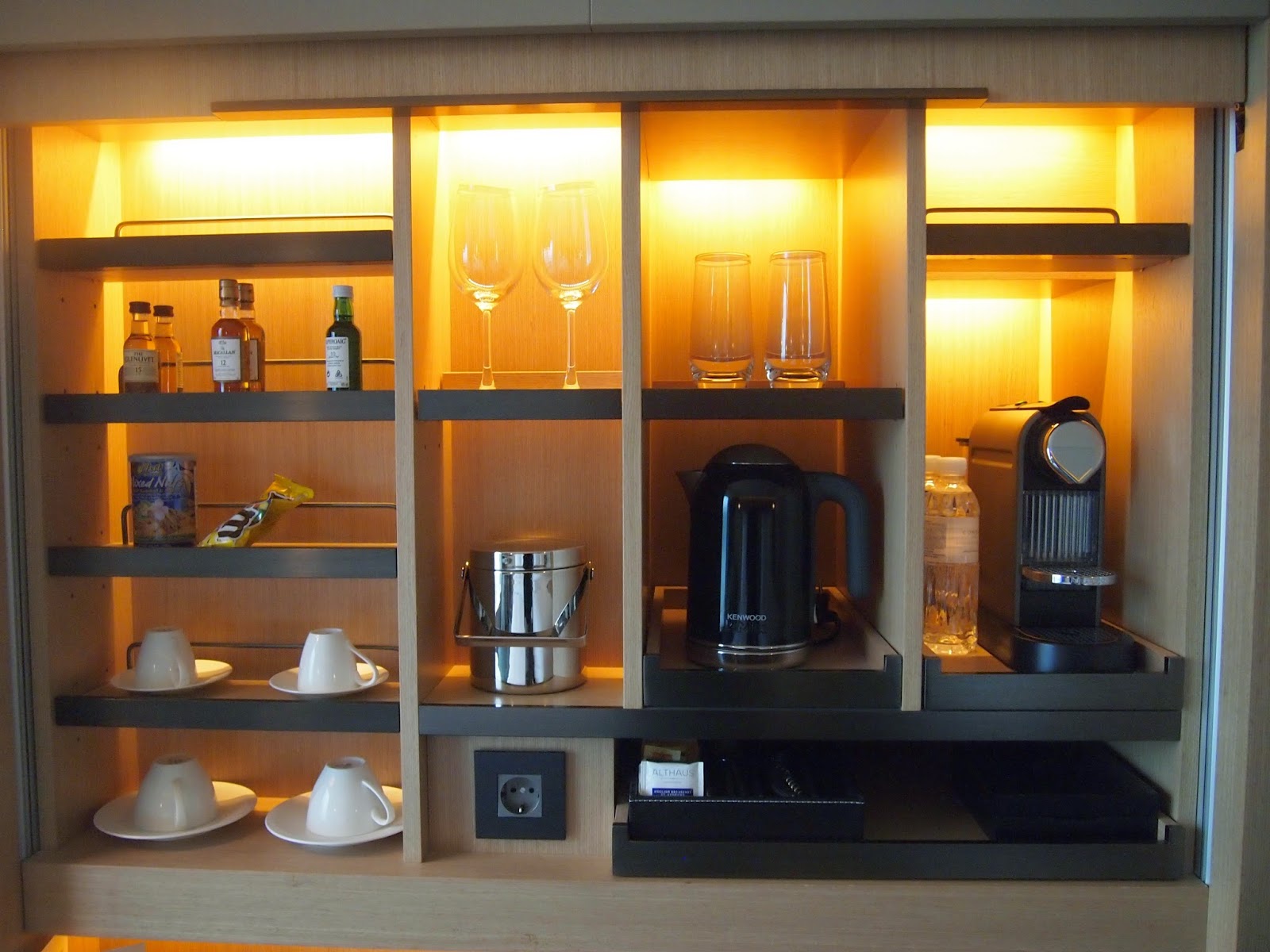 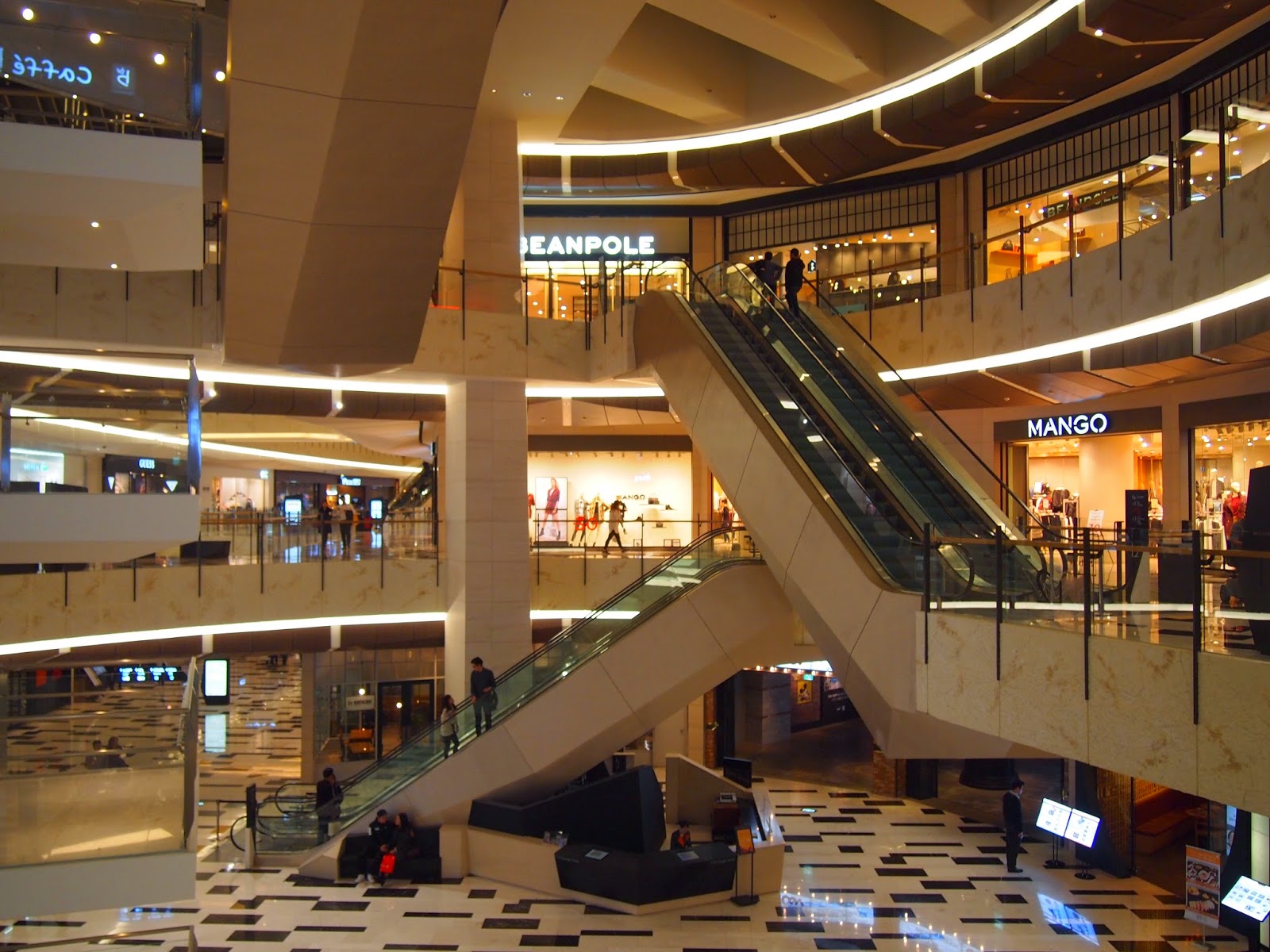 When getting ready for bed, we realized that we had forgotten our toothbrushes and with a simple phone call, two of them were delivered on a tray right to our door. Attendants were just as accommodating when my friend needed her phone charged. By now it had become apparent just how incredible the service at Conrad was. Not once did I see an attendant or server without a smile and each spoke impeccable English.

Maybe it was because we were both exhausted, but my friend and I agreed that we had one of the better night’s sleep in a long time.

Not wanting to get out of the super comfy beds, but not wanting to miss breakfast, we packed our bags and made our way to the buffet at Zest. The seating was spacious and modern but the real draw was the incredible variety of food options available. The Conrad has really gone out of its way to ensure that every guest- no matter his or her nationality or breakfast preferences- is catered to. There was a Western style breakfast bar, complete with an omelette station, a pastry section, a dim sum bar, a stir-fry station, a kimchi bar, a salad bar and juice bar to cater to all tastes. Our meal was incredible, especially for a buffet, and I ended up not being hungry until late that night as a result. 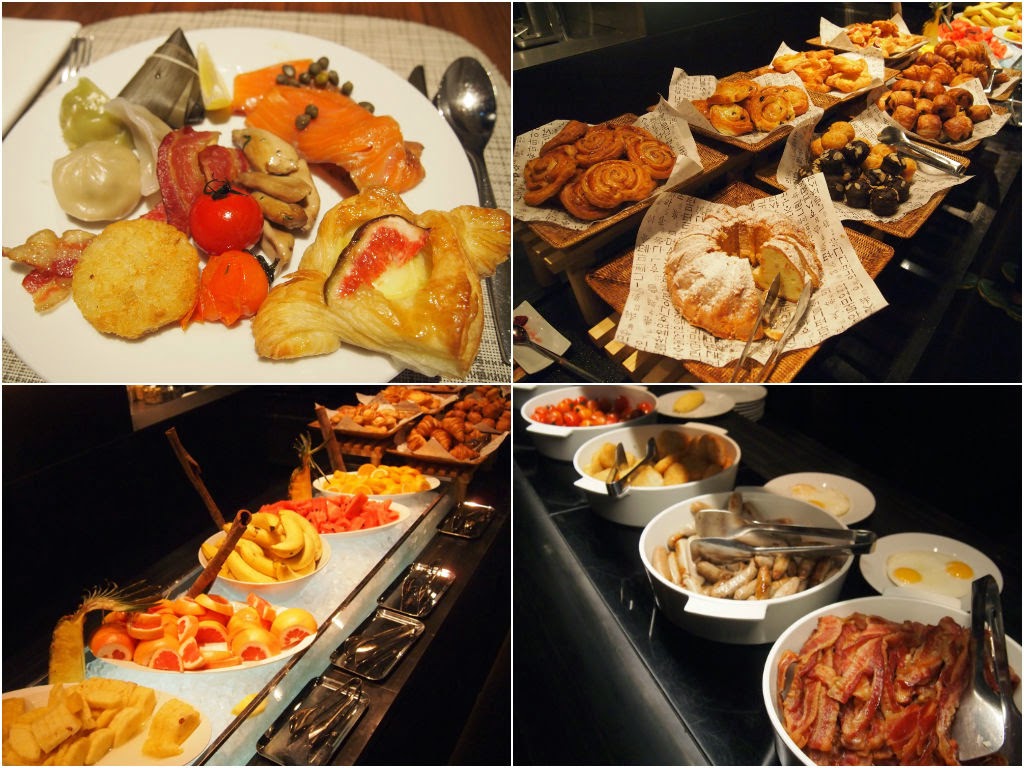 Sadly, it was time for work and after printing a few documents at the hotel’s small but convenient business center, my staycation came to an end, as did my visit to Conrad Seoul. Still, the top-notch service, excellent food, comfortable rooms, subtle luxury and endless amenities were just what I needed to recharge.

I imagine the luxury offered by the Conrad does even more for couples looking to celebrate a special occasion or for the first time traveler to Seoul looking to experience new things but in a comfortable setting. Fortunately for those wanting to give it a try, the Conrad Seoul is offering a number of deals until December 19, 2014 in honor of their two year anniversary. The “Design Your Smart Luxury Package” includes a one night stay, and a choice of two of the following options: breakfast at Zest, a ₩20,000 dining credit at Conrad Seoul or a room upgrade to the next available room type. Prices start at ₩275,000 (single occupancy, exclusive of tax).

Disclaimer: Although Conrad Seoul provided accommodations in exchange for this post, the opinions above are strictly my own.