By Mimsie Ladner on Tuesday, October 28, 2014
Few places in Seoul are as soothing as the Han River, also known as the Hangang. Stretching 319 miles (514 km) through the city and beyond, the river has played an important role in the Korean capital’s history. Although still utilized for economic and industrial purposes, the average Seoulite views the Han River as a source of recreation and entertainment.

Tracing the entirety of the river are a variety of parks, bicycle paths, basketball courts and riverside cafes. It’s my favorite place to hang out on a pretty day- perfect for picnicking, soaking up some sun or just going for a walk to enjoy the spectacular skyline of the city I’ve called home for the past five years. 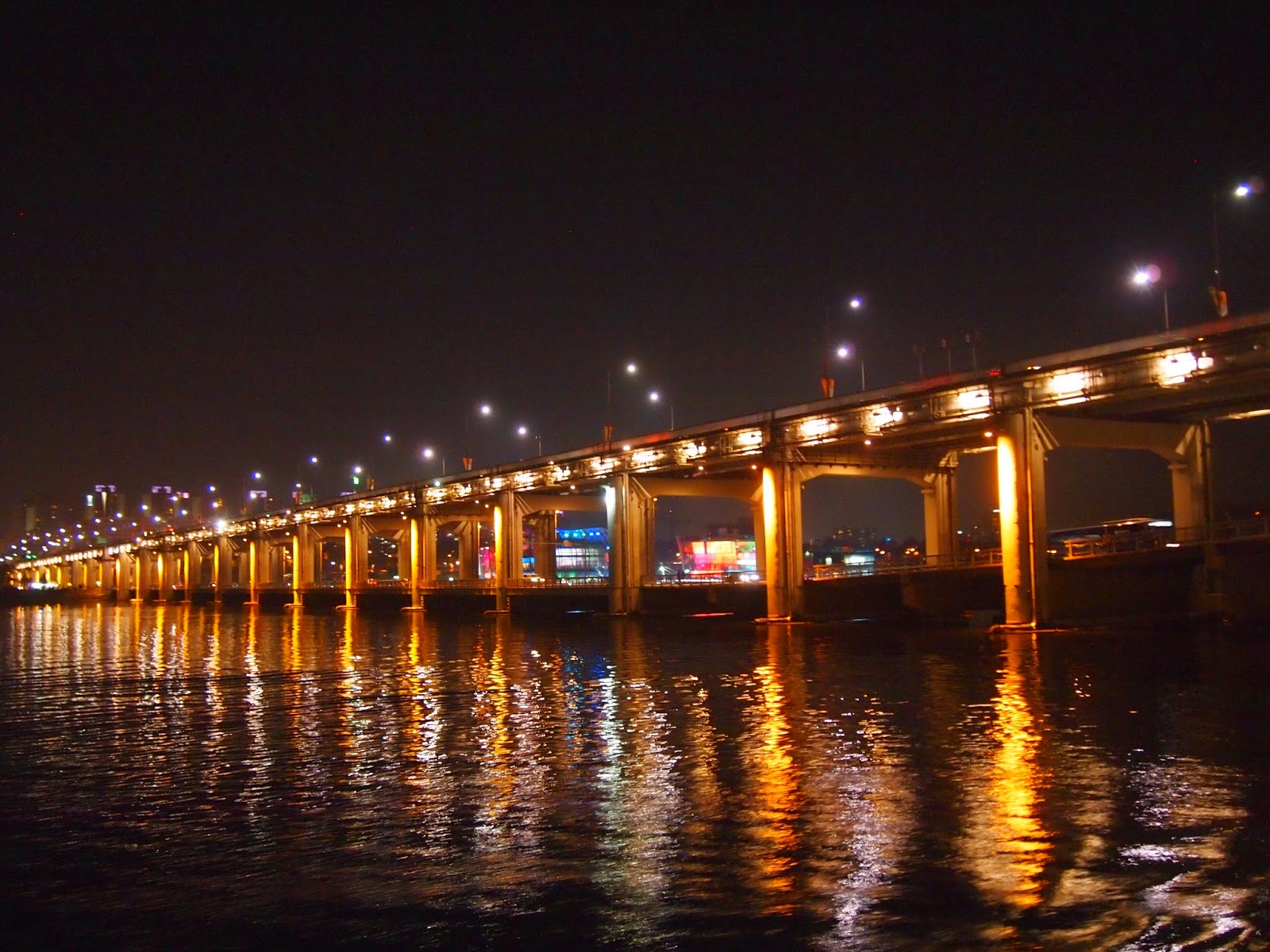 What many visitors don’t realize, however, is that there are a number of cruises that navigate the river and provide an entirely different perspective of the city’s lights, landmarks and architectural feats. Recently, I was made aware of just how many cruise options there are. From dinner cruises to cruises that feature live performances, there’s something for all tastes.

Funtastic Korea, an online ticket booking and tour service for foreigners makes it easy to reserve tickets for said cruises. Intrigued by the fireworks cruise, a ride that promises both beautiful night views and a show of lights, I reserved two tickets for my roommate, Marie, and I through the user-friendly site. I quickly received a confirmation via e-mail and printed my voucher- though its possible to save the image on one’s smartphone- to receive our tickets on the day of our cruise. 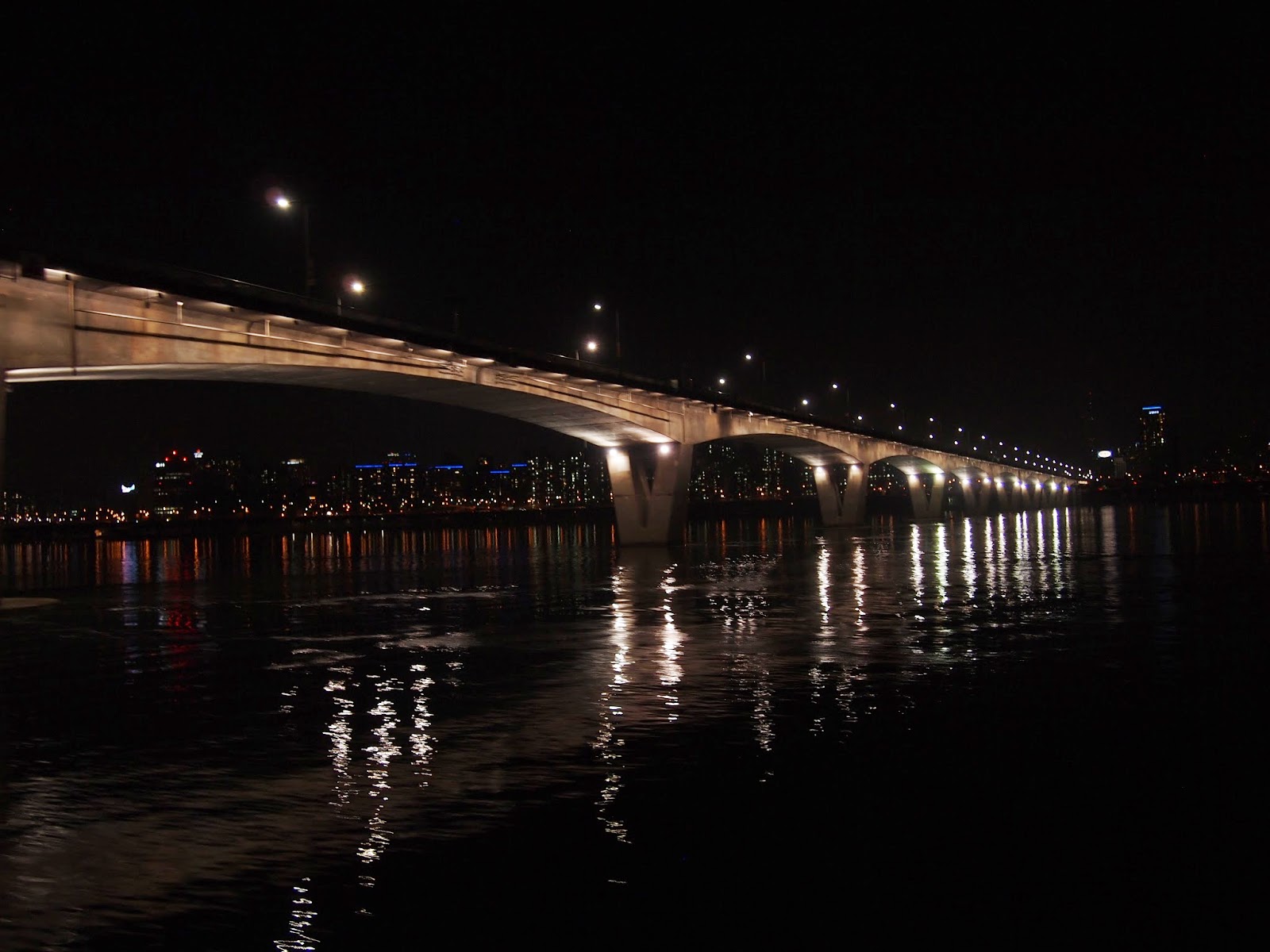 We arrived at the Yeouido dock on the day of our cruise a half hour early, though 15 minutes is more than enough time to claim your tickets at the ticket booth. We had no problem getting our tickets using the voucher provided by Funtastic Korea. Marie and I then picked up some Hangang convenient store goodies (refreshments are not sold on all the boats), boarded at the terminal and headed up to the upper, uncovered deck for better views. 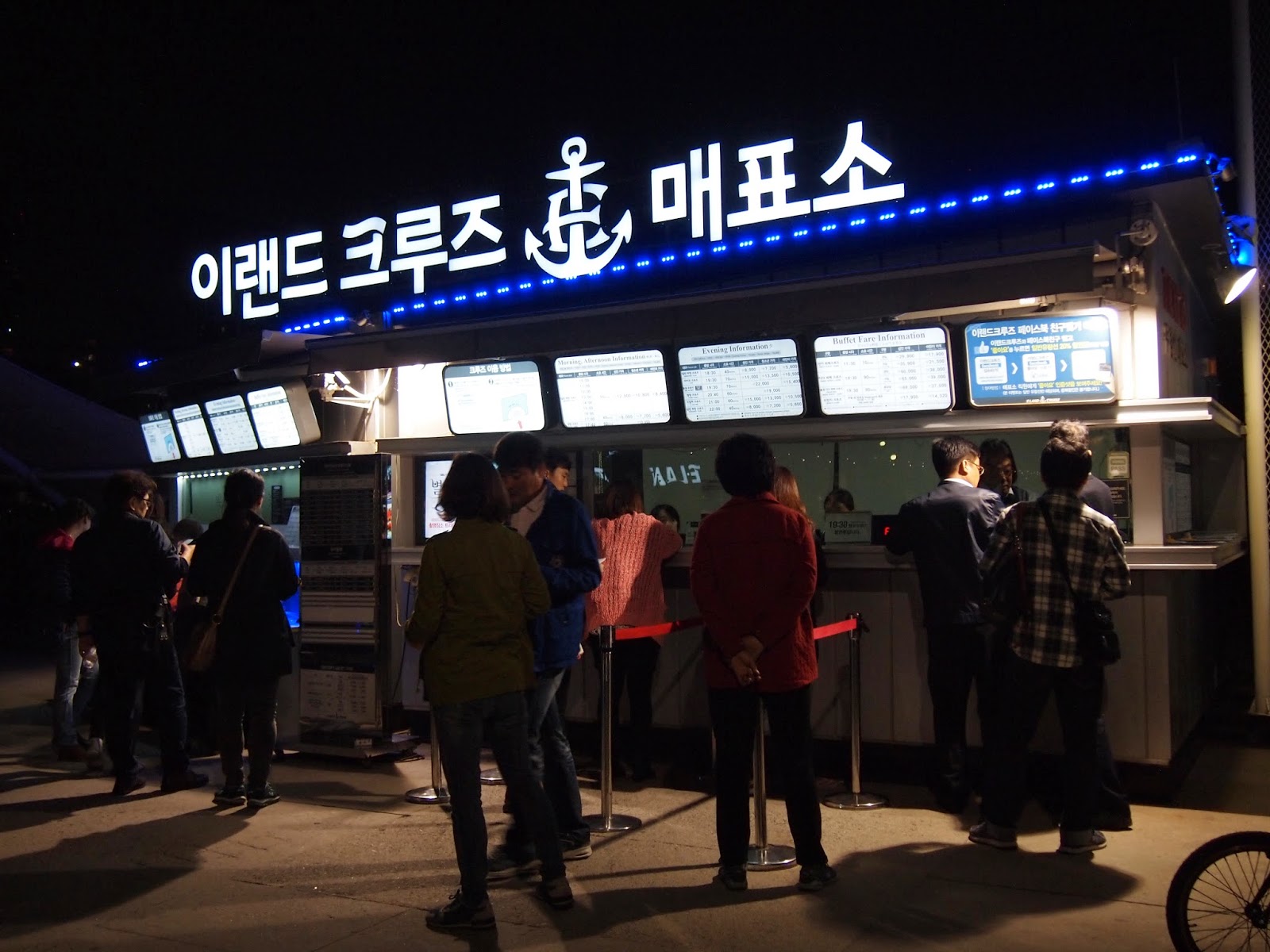 We regretted not getting in line earlier, as there are a limited number of seats on the top deck and missed out on the better ones. We didn’t mind, though, as the entirety of the Seoul skyline could be seen from just about every part of the boat, including the lower, enclosed deck which is no doubt the preferred riding spot in the winter. 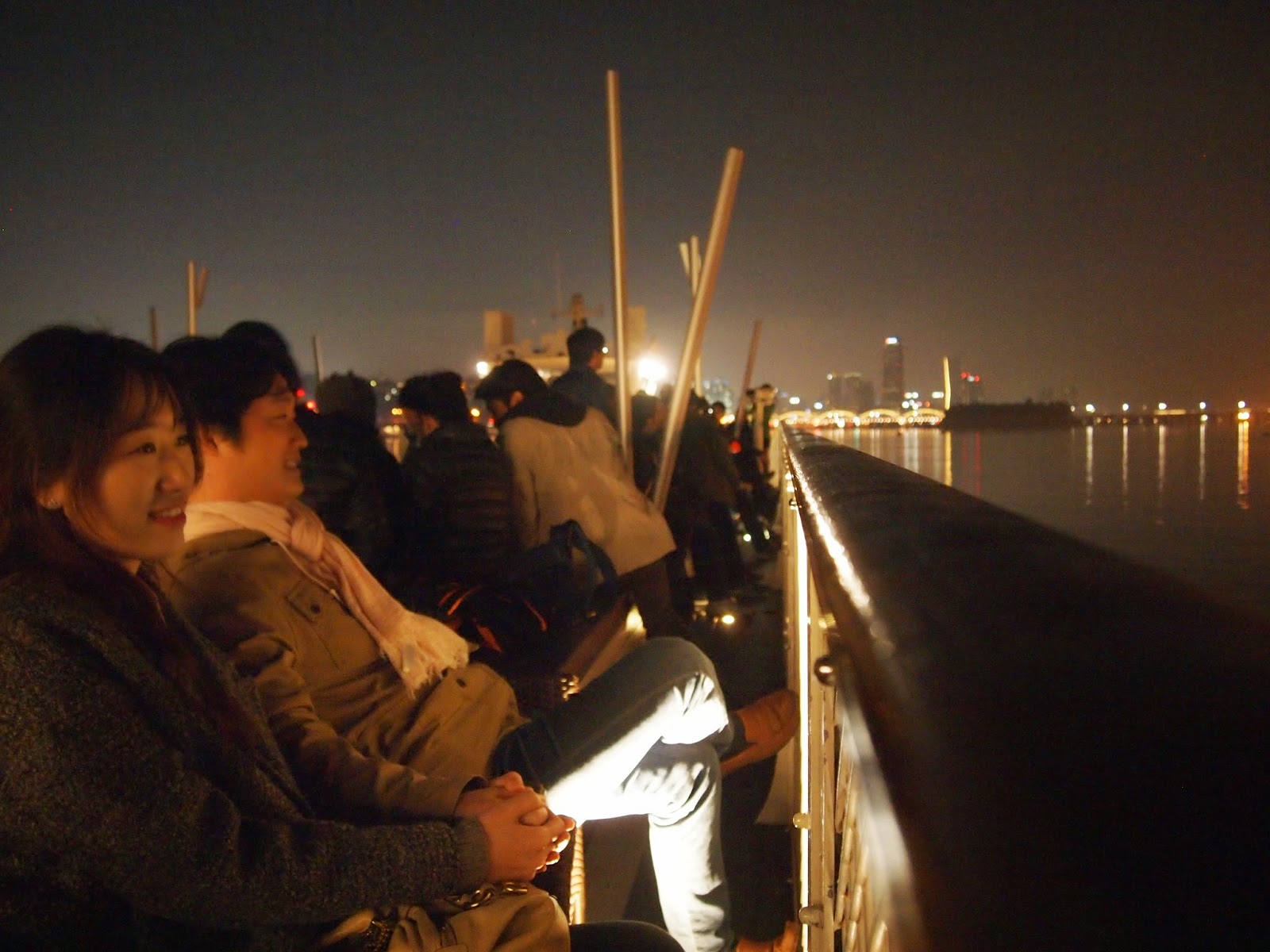 Soon enough, we were off. As we passed impressive buildings and under bridges, we were given an explanation in Korean, English, Chinese and Japanese about the history of each major place we passed. It was informative and not overdone, as a good selection of contemporary, relaxing music played over the speakers in between explanations. Passengers consisted of mostly couples and families, creating a calm environment- there was no pushing or shouting and everyone seemed to be thoroughly enjoying themselves. 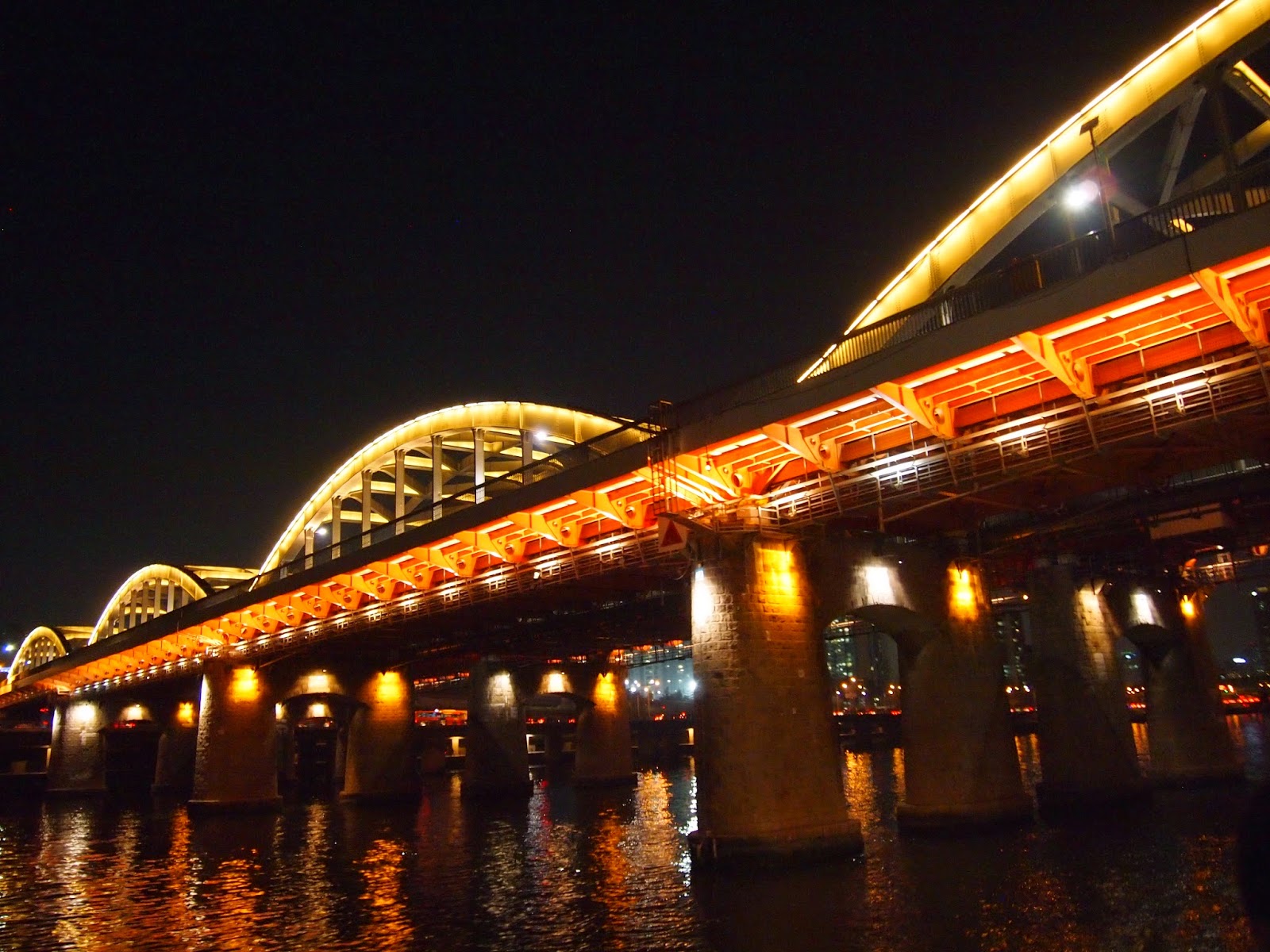 About twenty minutes into the one hour ride, we stopped at Banpo Bridge to watch the Moonlight Rainbow Fountain show. Although I had seen this show before from the parks along the river, it was my first time seeing it on the river and being on the boat provided a unique perspective. There were a lot of oohs and ahhs as hundreds of tons of water spurted from the bridge, falling 65 feet into the Han, illuminated by colorful LED lights. 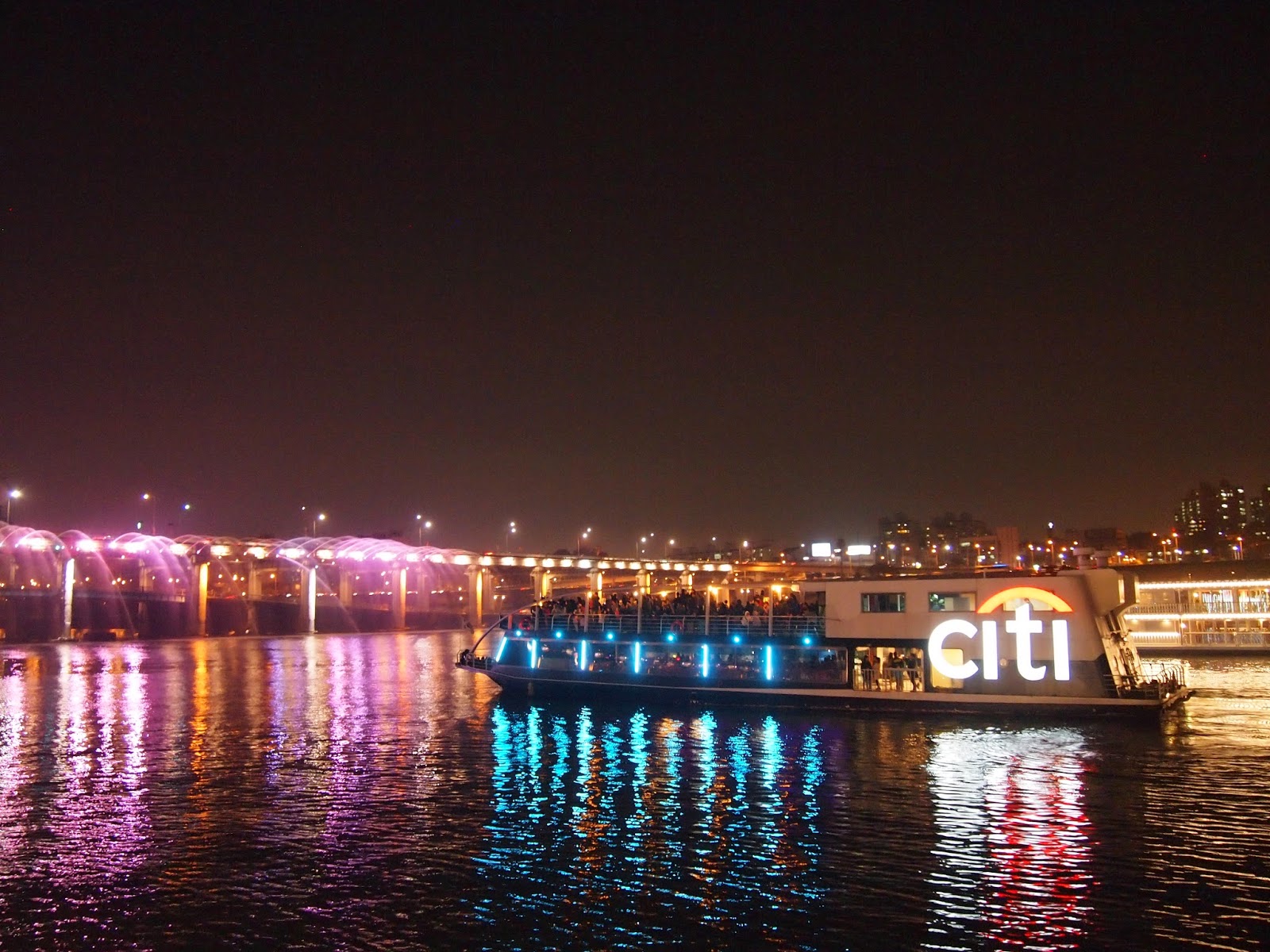 After the show, the boat made a U-turn and after passing the recently opened Floating Islands, the cruise attendant gave us a countdown. At zero, a boom sounded and blossoming fireworks appeared in the sky, their firey glow reflected in the water below. The show continued for about ten minutes and although it wasn’t nearly as impressive as other fireworks shows I’ve seen in Seoul, it created a nice atmosphere and was definitely a highlight of the trip. 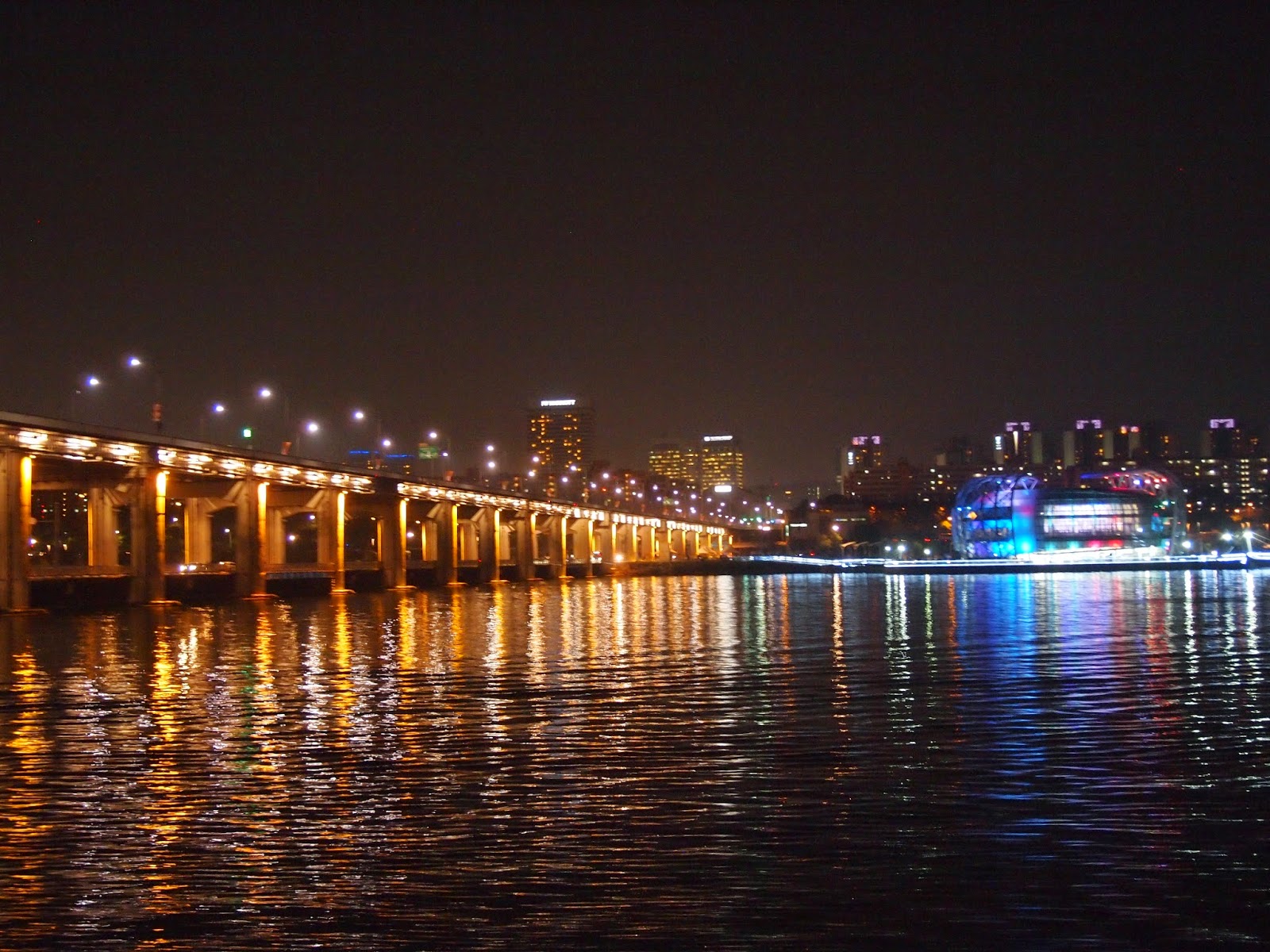 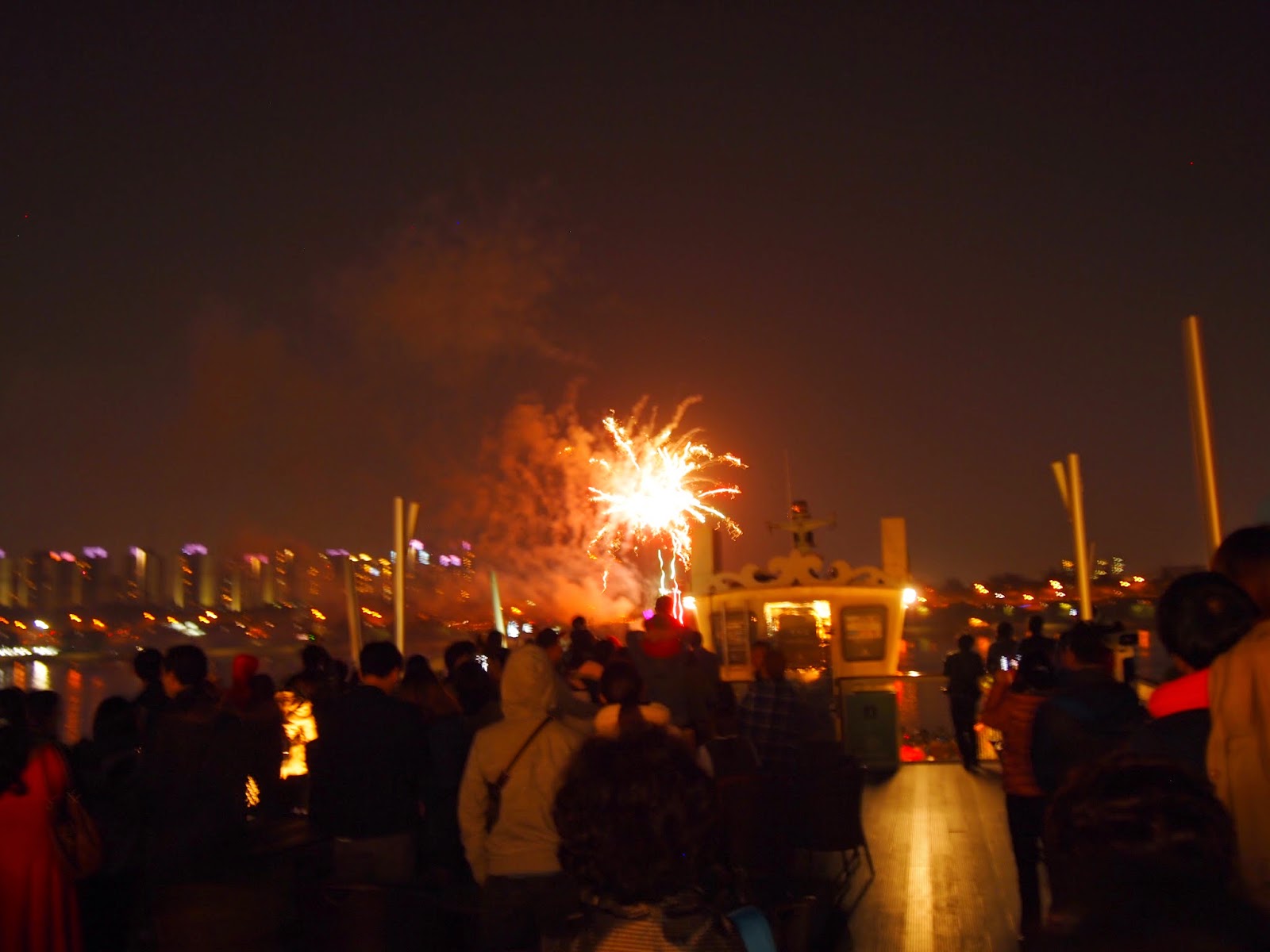 For the remainder of the ride, passengers were entertained by a humorous musician whose songs catered to all ages. Marie and I decided to stay on the top deck and were able to get better seats for the ride back. Although we are both long-term expats and have lived in Korea for quite some time, we both agreed that the ride only reminded us of what a beautiful city we live in and we both enjoyed seeing Seoul from the river that runs through it. 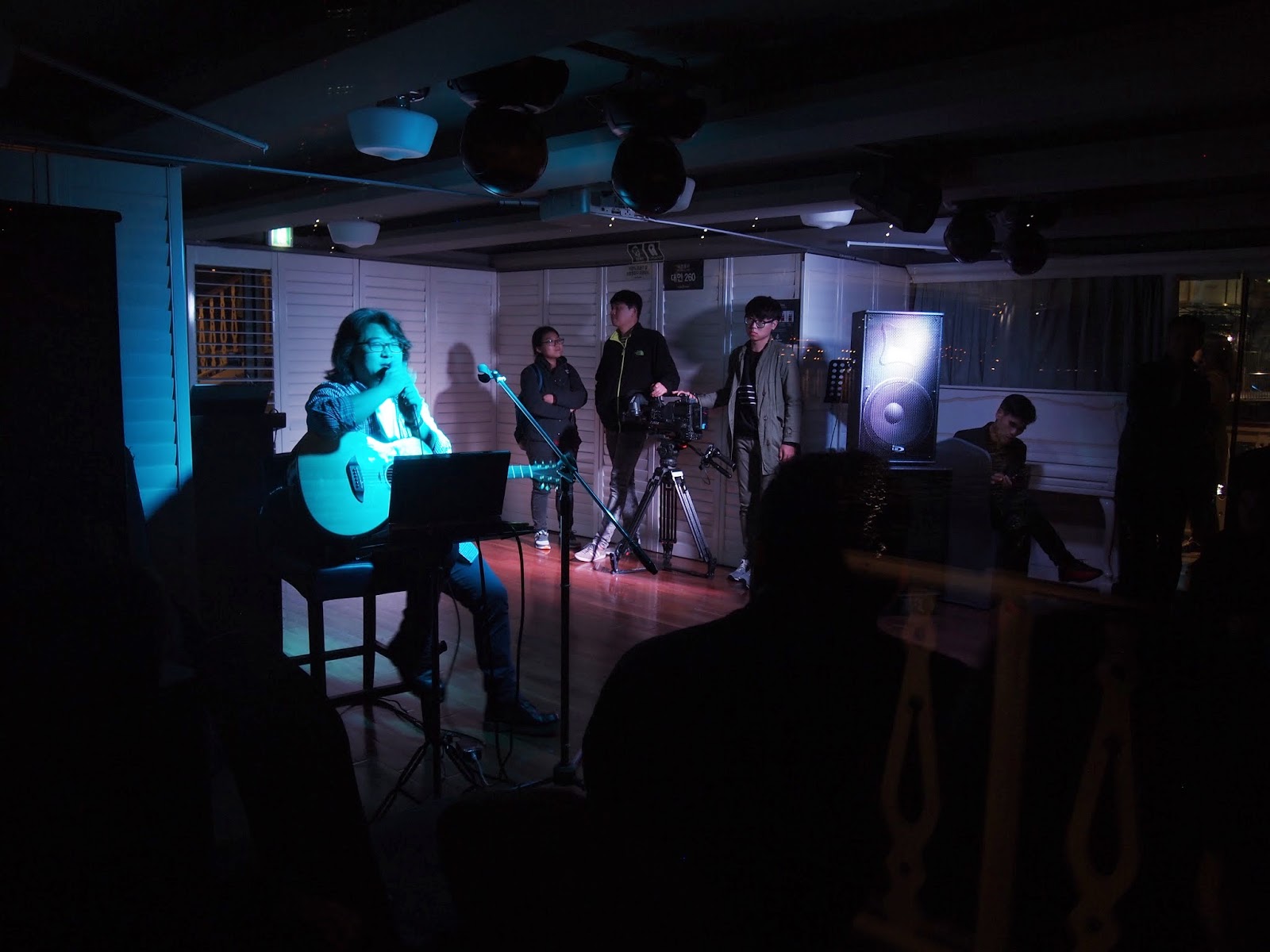 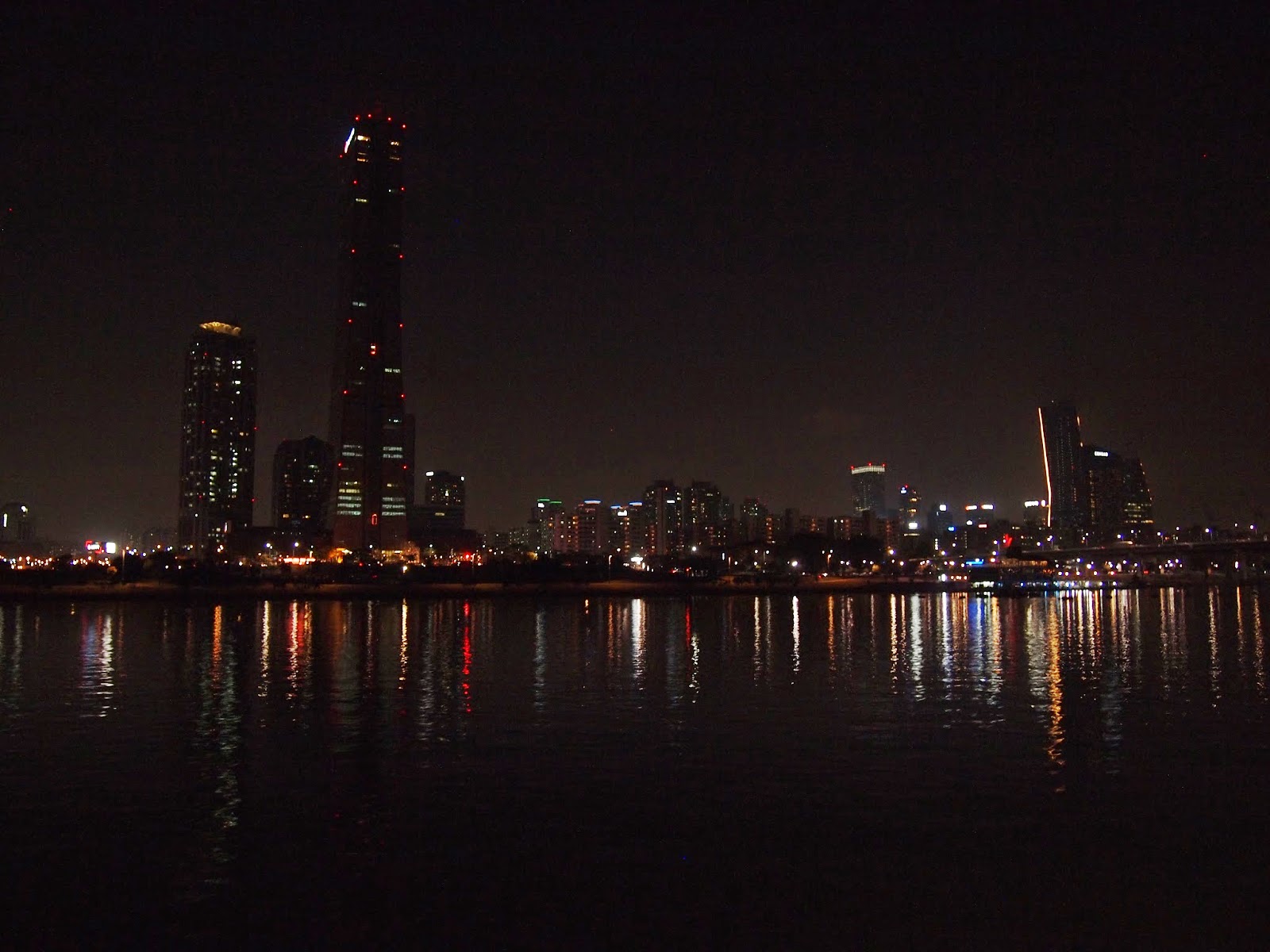 Reservations: Book your tickets using Funtastic Korea’s English ticketing service. Click here to reserve your tickets for this cruise, as well as many more.

Departure: From Yeouinaru Station (Seoul Subway Line 5), walk straight out of Exit 3 until you reach Yeouido Middle School. Turn left into the riverside park. Continue walking until you reach the water side. You should see the ticketing booth.